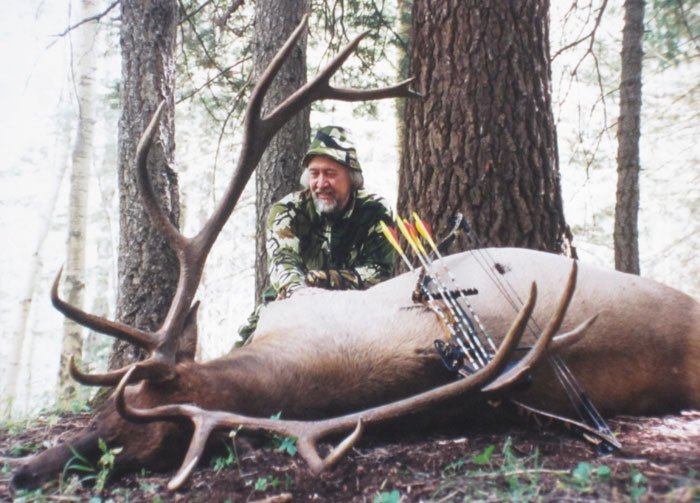 My best elk, this Colorado bull, was taken with a shot of just over 20 yards after I’d passed up several shots at smaller elk earlier in the day. No shot would have been over 40 yards. People who say you can’t get close to Western game animals don’t know what they’re talking about. The challenge of bowhunting is hunting and getting close, not just shooting long distances and hoping to hit the kill area.

Not long ago I saw a Facebook photo of a dead elk some happy bowhunter had arrowed in the late season. What snagged my attention was his offhand comment that he’d shot the bull at just over 120 yards.

Yeah, I’ll admit that I’m both a geezer and an old school bowhunter. And I realize that over the decades I’ve witnessed amazing changes in a sport I’ve loved since releasing my first arrow back in the late 1940s. Likely, the most significant change centers on the gear we now use. Namely bows. Arrows. And broadheads.

Think about it. What longbow or recurve shooter from the middle of the last century could have envisioned today’s variety of modern hunting bows? Not me, for sure. And even though Easton had introduced aluminum arrows in 1939, fiberglass and carbon shafts – not to mention plastic fletching – were still years away from widespread use back when I shot my first cedar arrow.

But these obvious equipment changes notwithstanding, hunting with the bow and arrow still stirs the imagination of millions who willingly accept the challenge of what Howard Hill called “hunting the hard way.” I know without a doubt that my own reason for picking up a bow instead of a firearm was and is the challenge of hunting with “sticks and strings.”

So what I’m wondering is why some bowhunters apparently are trying to reinvent the rifle by relying more on the modern weapon rather than the ancient challenge of the hunt.

And so, going back to what snagged my attention from this happy bowhunter mentioned above was that shot at a living creature at, according to him, over 120 yards!

I couldn’t help but wonder if he had a 120-yard pin on his bow, or if he’d simply held high and lobbed an arrow downrange. He also failed to mention how many arrows he’d shot before connecting. Whatever, it was obvious his matter-of-fact comment about the yardage caught the attention of others, who like me felt the public comment was about as dumb as taking such a long shot.

Some posts that followed his post questioned the ethics of long-range arrow flinging. Some defended the practice and hunter who killed the elk, with a few guys claiming they were deadly accurate at ranges of 100 yards and more after regularly practicing at longer distances. They pooh-poohed the increased risk of wounding and losing animals that comes with long-range shooting, saying those of us who are uncomfortable taking such shots shouldn’t be envious of those who can.

I’ll concede that a hunting arrow with a sharp broadhead can kill a game animal at any distance if it hits the vitals. But there’s the rub. Animals are not foam or paper targets. They can and do move. Taking 100-plus yard shots at a browsing buck or bull is not the same as shooting an unmoving 3-D replica of the same animal. No matter how good you are on the latter doesn’t mean you can consistently hit the kill area of live animals at great distances.

Besides, a big part of the challenge of bowhunting that I love is using my stalking skills to slip within good bow range, remaining undetected by wary game, and then making a quick, clean kill by putting a well-placed arrow through both lungs.

I once killed an Illinois buck at 65 yards while shooting a 40-pound Pearson recurve. No rangefinder. No bowsight. Strictly instinctive. That was back in the early 1960s, when I was shooting NFAA field archery tournaments where the longest shot on the course was the 80-yard walk-up target, and I regularly practiced taking 50, 60, 70, and 80-yard shots with recurve bows. Today, even with my rangefinder, cam bow, composite arrows, and either mechanical or fixed blade broadheads, I rarely take a shot much more than 40 yards although I still practice at longer ranges. Most of my stickbow kills are under 25 yards.

It’s just that I’m consistently more accurate – and confident – taking shots at ranges where bowhunters kill the vast majority of big game. Equally important to me is the satisfaction that I derive from being a hunter and not just a shooter. I prefer looking back on a successful hunt and crediting my hunting skills as much or more as mostly relying on luck and the bow I’m holding to put the animal on the ground.

SOME OF THE ELK HUNTERS who defended the Facebook guy’s 124-yard shot were from out West. A few mentioned in that more open terrain long shots were the norm, and that taking 100 yards shots at mule deer, elk, antelope, moose, bears, sheep, mountain goats, and other critters were not that uncommon.

Funny, based on my own experiences including the 16 years I lived in Montana, I tagged my share of Western game without taking a shot of more than 50 yards. My first Colorado muley was arrowed in ’65 at 40 yards, but I’ve since shot several dozen between 15 and 25 yards. My first bull elk in the ‘80s was standing just over 20 yards, as were my other bulls, including several record book animals. My first pronghorn was shot at less than 10 yards, my first black bear at less than 20, and my first bull moose at 40, though three later Bullwinkles were killed at under 20 yards, with my last Montana moose shot a just over 3 yards. The two mountain sheep I killed were taken with shots of less than 25 yards, and two mountain goats were shot at about 35 yards or less. And of all the caribou I’ve tagged since the 1980s, a majority were stalked and shot at ranges of 20 to 35 yards. A giant muskox bull I stalked on the frozen tundra fell to a 30 yard shot.

Such anecdotal evidence won’t convince some skeptics that long-range shooting is unnecessary when you hunt “out West.” But, once again, I feel hunters who rely more on their bow and Lady Luck than themselves and their woodsmanship, are really missing out on the true thrill and challenge of bowhunting.
Sponsored by:  The Archery Hall of Fame & PCBA

Writers Camp: ATSKO, Can You Really Eliminate Your Scent?