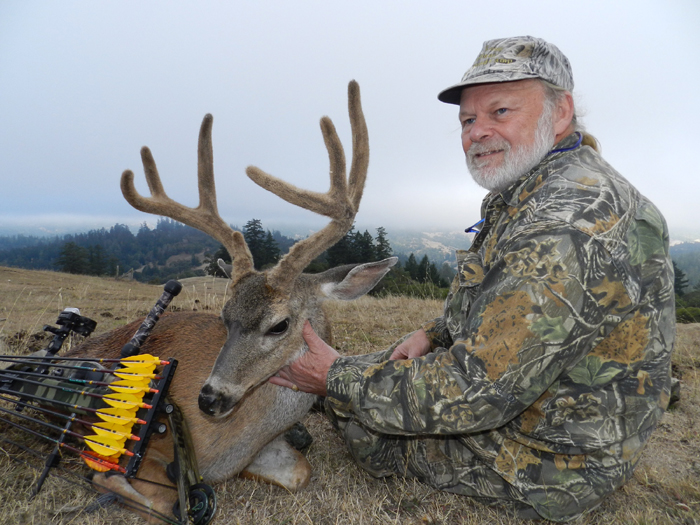 This black tail deer from Northern California was deer species #3 on my quest.

Before I get started I just wanted to say how happy I am to be back with Rich and Robert at Bowhunting.net.

To continue along on the prior theme of my column “Trophy Bow Hunting” I wanted to focus on finishing my “SLAM” of North American Deer species.  Like most of us, deer was the first species I harvested with my bow.  Being from the East, it was a whitetail deer.  Some of our readers in the West may have started with mule deer, or further West even with black tail deer, but I’ll be willing to wager that the majority of us started our journey as trophy bow hunters with one of the five species of deer.

Once I had a few whitetails “on the ground” I decided to branch out to other species.  As time went on I was fortunate enough to harvest all the representative species and then started to focus on finishing the “Super Slam” by filling in the various sub-species.  That brought “DEER” back up on my radar!  There are five sub species of deer recognized by the Pope & Young Club for record keeping purposes.  Boone & Crockett considers the same five, so those are the ones I’ll deal with in this column.  The most popular, by far, is the Whitetail Deer.  It inhabits the entire eastern half of the country, most Canadian Provinces, the majority of the Mid-west and even several Western States like Montana and Idaho.  Most of North Americas over three million bow hunters started hunting whitetails in their back yards!

While there are actually a number of sub-species of whitetail deer in North America the two major record keeping organizations only distinguish two.  The desert whitetail (Coues deer) of Arizona, New Mexico, and old Mexico is geographically separated from all the other subspecies, and therefore has its own category in both record books.

The second most popular deer, from a bowhunting stand point, has to be the mule deer that occupies most of the Western States.  The range of mule deer goes from old Mexico in the south to Alberta and British Columbia in the north.  From as far west as California to as far east as Kansas.  Mule deer are found high in the mountains as well as in arid near desert plains.  They are hunted from late summer into January, depending on the State, Province, or country and are our biggest deer in both body size and antler development.

A close cousin of the mule deer,  Columbia Black Tail Deer live in the far west near the Pacific coast from California up through Oregon and Washington and into British Columbia.  Like mule deer, black tails have “branched antlers” where the points tend to branch off other points rather than all being stacked on top of a main beam (like whitetails).  Black tail deer are typically smaller than mule deer and carry proportionately smaller antlers.

The last, but certainly not least, of the five deer sub species is the Sitka deer primarily from Alaska.  These deer have a range smaller even that the Columbia black tails and are mostly found on large coastal islands off the southern coast of Alaska.

In my personal quest to collect the deer “slam” of North America, I of course started with whitetail deer.  I still hunt them almost every season in a never ending quest to harvest a bigger one than what I already have on the wall.  Next I headed west to collect a mule deer.  I consider both the white tail and mule deer to be “representative” species in that they have differing antler structures.  Once I had those two I focused on Columbian black tails early season in California and Coues deer during the late season (rut).  That left only the Sitka deer to complete my personal quest for the “slam” of North America deer.

After doing a lot of research I’ve come to believe that one of the very best places to chase Sitka deer is on Kodiak Island.  I also have come to believe that the best time to chase them is the first week of November because the rut is starting and typically the bucks have moved down closer to the coast.  As anyone that has hunted Alaska can attest, the weather can be awful, especially if stranded in a tent for 6-10 rainy days in a row!  I therefore believe the best option is to hunt from a large, comfortable, boat with heated cabins, hot showers, and good food!  Call me “spoiled” if you want, but at my age sleeping on the ground in a wet sleeping bag is just not the fun it used to be!

The problem with this hunt is getting one of the very limited openings available on one of the few live-a-board vessels that cater to hunters, and bowhunters in particular.  To attempt to complete my quest I will be hunting with Homer Ocean Charters (HOC) the first week of November in 2017.  I had to book two years in advance to get that week, but it will be worth it!  On the “plus” side, there is room for five bowhunters to join me on this trip.  I’m throwing it out there to followers of <bowhunting.net>  in this column giving you all “first dibs” on those limited openings.  If you are interested get with me ASAP, as the spots will be booked on a first come first served basis.

For all the details contact me by email roygoodwin@comcast.net but here are a few points of interest:  The food is unbelievable!  We’ll get taxied to shore each day in groups of two and return each afternoon/evening to heated cabins, hot showers, and dry bunks!  The six day hunt is only $4,000.00 and your spot can be reserved with just a $500.00 partial deposit.  We are allowed three deer per hunter and tags are available on the boat.  There is great fishing and also waterfowl shooting available for those interested.  I have personally hunted with them before as have several close friends all of which give HOC very high marks.  Whether you need a sitka to finish your deer “slam” as I do, are just looking for one more species, or are looking for your first “Alaskan Experience” this could be your best opportunity.