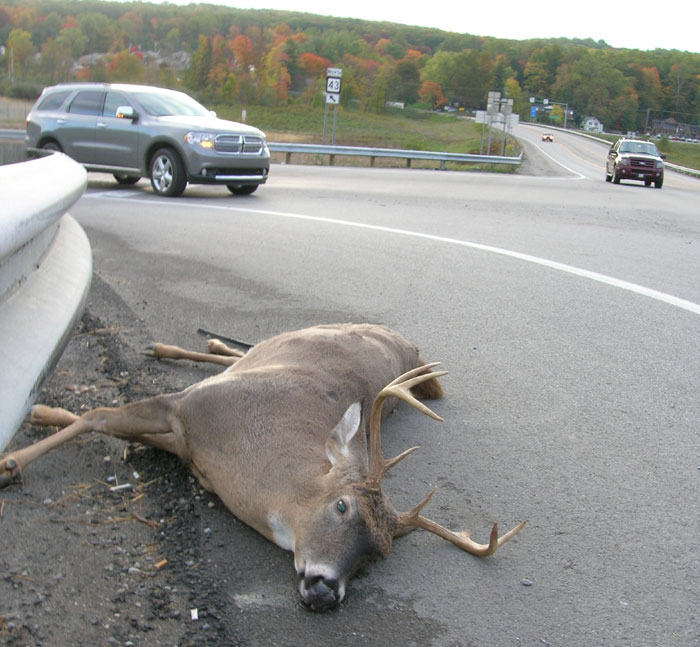 A common occurrence near urban environments.

Apparently this is a true story.  I know it sounds so dumb that it will be hard for you to believe, but it apparently is true.  Must be because you just can’t make this stuff up.

Staten Island has a deer problem as many towns and cities do today.  An aerial survey done in 2014 showed 763 deer and obviously there are more on Staten Island now.  Of course this leads to Lyme disease, car collisions, damage to yards — all the problems you get when you have too many deer in an urban setting.

You could hire sharpshooters.  Maybe you could have a bowhunt done under the strict rules that all urban towns and cities use for such hunts.  But maybe not.  I’ve never been to Staten Island, but maybe it is so urban and crowded that a bowhunt would not work.  And even if they tried to get approval for a bowhunt, urban antis there would tie the city up in litigation for years.  So, perhaps bait sites and sharpshooters is the way to go.  No matter what, if you are going to tackle the problem, someone has to kill deer.  Right?

Well, I guess not because the Mayor, Bill de Blasio, and city officials have decided to do vasectomies on all the bucks on the island at an estimated cost of $2 million dollars, and that is just the first year cost.  Like I said, you can’t make this stuff up.

There have been instances when towns have tried to sterilize does.  That didn’t work.  Just couldn’t catch and sterilize enough to make a dent in the population.  No town or city has done vasectomies on bucks.  Ithaca NY tried, and Cornell biologists who did that work could only do three vasectomies.  They said that it wasn’t safe for the deer nor the people trying to do the vasectomies, so they stopped.  But apparently Staten Island politicians believe that sterilizing every buck on the island will work.

All the deer experts, people that have done research on urban deer problems, say this approach will not work.  Without reviewing why they make these statements, let me just run down the eight reasons that I believe this approach is crazy and a huge waste of tax payer’s money.

First, there is no way they can capture all the bucks.  I figure there are some old, experienced bucks on the Island, and those guys will be very difficult to capture.  Second, what about the bucks you don’t capture?  They’ll mate does and one buck can service up to 4 does or so.  Third, I don’t know how deer get to Staten Island, but I figure more will come.  I guess the city officials figure they will just keep sterilizing all the bucks forever.  Hmmm.

Fourth, apparently, based on Ithaca’s experience, you can’t safely conduct vasectomies on bucks.  Fifth, you’ll still have 1000 deer running around, even if you sterilize every buck.  Those deer will carry on spreading tick diseases, hitting cars, etc.  Sixth, this will take forever to accomplish, assuming it can be done.   Seventh, this approach is far from humane.  City officials believe this is much more humane than killing deer.  Really?  Capturing deer puts a great deal of stress on them.  Conducting surgery on deer does the same.

Eight.  Think about this negative.  If you lower buck numbers, then supposedly all the does won’t get bred in their first cycle.  Thus, 26 days later they will come into heat again, and again, and again.  And this continual rut means lots of does and bucks running around getting hit by cars, etc.  Not to mention problems with late-term births.

Oh yes, the state Department of Environmental Conservation has to approve this experiment, and those folks know this is a crazy idea that will not work.  Maybe, because the city says this is just a “study” the state will approve it.  Who knows?

The bottom line is that city politicians in many places just do not understand deer biology and the plain and simple fact that sterilization just does not work except for small pen-like situations.  Is Staten Island one of these situations?  At 58 square miles, I do not think so.  This has no chance to work, but the mentality of city officials in many places, not just Staten Island, seems to prevent them from seeing the obvious.

Being raised in urban environments with no exposure to real nature, and what happens in real nature (animals die a lot), plus being in situations where they have to deal with citizens who also have no such understanding, tends to blind the mind.  Add to that the fact that such politicians have to face citizen lawsuits and this may sway them to make expensive decisions that have no chance for success, but will reduce immediate confrontations.

This situation will be an interesting one to follow.  However, the bottom line, the end result, is as predictable as the outcome of a Pittsburgh Steeler’s game with a pony league football team.

Only in America would we spend $2 million to do something everyone knows won’t work.  My guess is that after the first year, they’ll continue to waste money for a second, maybe a third year.

New Base Layer Technology for Hunters From Badlands