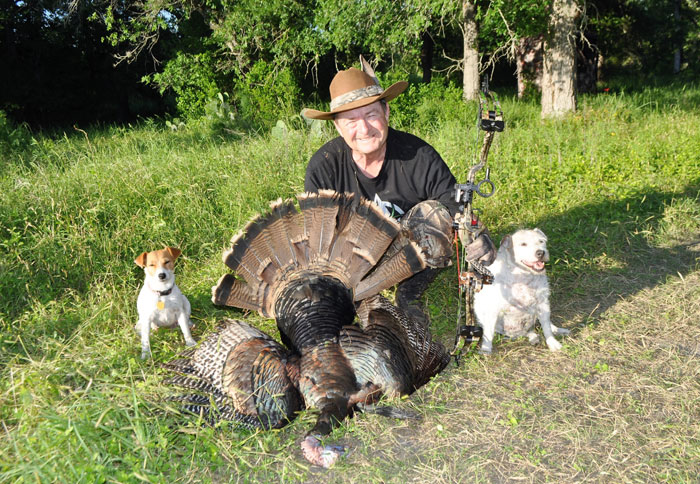 As most of you know by now, hunting gobblers with my trusty bow has been a passion of mine since the late 70’s.  I grew up in Missouri where Turkey hunting is a long time tradition and passion, I remember when squirrel hunting and  seeing turkey’s all over the Ozarks and that’s where I got hooked!

Since those long ago days of crawling around in the woods I have been privileged to have taken all species of Turkey’s in the Americas except the Oscillated that is in the Southern jungles of Mexico.  Now today I just enjoy the opportunity to hunt the most beautiful turkey in the Lower 48, the Rio Grande, right here in Texas!  Let me tell you there is nothing more exciting or beautiful than having  an old mature Rio tom come strutting into my decoys.  Those iridescent oranges, reds, jade blues and brilliant bronze colors are incredible.  It is a true thrill to call one of these beautiful birds in and putting an arrow through him.

The Spring of 2015 was brutal, gobblers were acting really crazy they would gobble on the roost and then hit the ground and walking off ‘hush mouth’. If they did come to the call it was one of those sneak in, look around and then turn and walk off before you could even get a shot deals. Frustrating didn’t even come close to how I felt on every hunt but one.  I had one gobbler on the ground with my bow and I really think he just got tired and committed ‘suicide by hunter’.  I’m not complaining it was one of those years.

It was the last week of turkey season in south Texas and I got a call from a friend of mine who told me he had a place that was ‘loaded’ with turkey and the area had not been hunted.  Well, let me tell you I could not wait to go to this place.

We (my cameraman and I) arrived at the ranch around 5:00 pm. As we drove down one of the sendero’s it was unreal. We saw gobblers everywhere out in the fields strutting and this was the last week of the season.  I knew I would be reminding myself not to overcall these toms and make them call shy.  I quickly put up my blind along a field of chick peas that was just coming up, near a creek bottom that had huge Live Oak’s, Pecan and a large number of Chapote-Texas Persimmon,  all mass crops that turkey and deer depend on in August, September, October & November along with year round water source, another huge magnet for turkeys.  After we set up our ground blind and placed our chairs and small cooler in the blind we placed my Avian-X  Strutting Tom and Hen Breeder decoys out 20 yards from us and crawled in for the last three hours of bowhunting.

The first Gobbler came to the call by sneaking in from our right out of some really thick brush.  It was a 2 year old that just stood there and stared at the decoy spread. He would strut a bit and then fold down. This went on for about 5 minutes.  It was fun to watch but I didn’t know if he was going to come in or turn tail and run for the hills. I decided to speed his decision making process up a bit so I gave a soft purr and cluck. He gobbled and cautiously stepped out into the open where he slowly worked his way to the decoys, giving me the shot I wanted.  I drew my bow, aimed and took the shot and watched the bird duck and then take off for the hills. I’ve lost count of how many arrows I’ve shot from a ground blind but on this day I forgot about the top of the blind window. Lucky bird. My arrow hit the bottom of the window and deflected the arrow which sailed over the top of the tom.  Now, that’s a great way to start the afternoon hunt I thought.  As all of this was going on I had turkey everywhere just gobbling their butts off. Most were probably laughing at me hitting the blind instead of the bird.

5:50 pm:  I called in 3. They came running in to a cutt and cackle, threw on the brakes and hung up at 25 yards strutting, spitting and drumming around the decoys,  constantly shying away.  Confidently and full aware of the window, I drew my bow and launched my second arrow of the evening. This time, instead of hitting blind I was rewarded with flying feathers.  The shot was a pass through, kinda. Another thing I know is you never shoot a strutting gobbler broadside.   99% of the time you’ll skin off some feathers, maybe give the bird a cold because of the loss of feathers but you are not going to kill him.

Back to the drawing board.  It is getting late in the evening,  7:30 pm and about 43 minutes before sunset when I called in 7 Gobblers all standing around the field putting on quite the show strutting. There were turkey in every direction I looked but not close enough for a shot. Finally I had 4 of these birds break off and come to the decoys.  I thought. Seems like this was not my day as the Cautous ‘4’ got to within 30 yards,  smelled a rat and took off for the hills. “No way”, so  I took a ‘Texas Heart Shot’ and missed. What an afternoon. Gobblers everywhere, three arrows shot and my only Show and Tell was a hand full of feathers and a red face. Oh, well it was a great afternoon and I was coming back.

I arrived at 7:00 am,  I was late. I cannot begin to tell how PO’d I was being late, at least an hour late to the hottest turkey hunting spot I’ve had to hunt in years.  When I drove into the pea patch area there were 15 gobblers strutting in the field following about 20 hens, what a sight. I was sure this was going to be an incredible day but after we got situated in the blind the morning dragged by with us never hearing a gobbler.  I sure wasn’t for lack of trying. I was using low calls, nothing real loud and only calling every 20 minutes. This is the boring part of calling late season.  As you may know, in the real turkey world the hen goes to the gobbler to be bred.

late morning, things heated up and around 10:30  I had a tom walk in right past my decoy … that never even stopped. didn’t even hesitate. I was trying to get my bow up and Wayne was trying to get his camera up and on the tom and by the time we both got coordinated, the tom was out of sight. Bummer!

11:45  I had a tom crank up behind me. Gobbled like crazy for about 30 minutes and never moved.  Playing hard to get, he wanted the hen to come to him.  By 12:30 with the sun blazing away  on our blind I figured it was time move outdoors the blind under that oak and get some shade. It must have been 120 degrees of sweaty misery in the blind before we decided to move.

7 hours of sitting in the blind had me talking to myself. I had to get out and move around to stretch my legs. The blind is huge with plenty of room, to stand and move around but I wanted to walk around outside.  And you know,  as soon as I got out of the blind a gobbler lit up not 75 yards out. so, I duck back inside and get ready. True to form this bird goes nuts but would he come to me?  Heck no but 30 minutes later I found out why. The guy was with a hen. He was happily taking care of business and you can not call a tom off of a hen and I don’t care how good of a caller you are!

OK, that was one bird not interested in what I had to say so I resumed my calling, basically ignoring this one.  I was calling every 20 minutes and what do you know, I started to hear some interest from the field.  Then at 4:30 I heard a gobbler and I knew this Tom was close.  I ‘cutt’ at the tom and the whole world lit up.  Out walked 5 gobblers in one group and all were strutting. I had placed my Avian-X Breeder decoy in front of me at 20 yards just on the edge of the pea food plot.  All 5 were walking in a line, strutting and coming right to my decoy.  I ranged the first one at 25 yards.  What a beautiful sight. I picked out the tom with the longest beard and when he gave me an open shot I turned lose my deadly RIP-300 with the wicked 3-blade, 2 inch cut Grim Reaper ‘Whitetail Special’.

This shot was on the mark and knocked the bird completely off of his feet where he flopped around for a few seconds and then lay still. This is when his ‘buddies’ attacked. As soon as he stopped moving the other gobblers ran over and jumped on the ‘dead’ one. It was crazy, not because of the attack but then ‘dead’ gobbler got up and walked off with the other toms!  I just sat there with this shocked look on my face as my perfectly hit bird just got up, shook it off and walked off with his buddies like he had just tripped over his own feet. What the heck?

The area they walked into was open brush country with mesquite and long grass.  You  could see where they entered the brush and walked through the long grass.  I  following the trail and picked up some good blood sign on the leaves.  I followed for about 80 yards and then it just stopped.  I looked for about 30 minutes and,  nothing.  I was about 20 minutes from Record Buck Ranch and I knew several of the guides there had blood tracking dogs.  I called Ricky Kay who has a couple of Jack Russell dogs that are the best in the industry for find crippled game.  When Ricky answered the phone, I explained to him what the situation was and he said, “Sport, turkeys don’t leave blood trails” I told Ricky this one did and asked if he could help locate the gobbler.  When Ricky showed up he could not believe the amount of blood on the ground from a turkey.  Well, long story short, both of his Jack Russell’s found that Tom. What I knew was a perfect hit, wasn’t but the broadhead did enough damage with a marginal hit to bring it down. It was though, a great bird, he had an 11 inch beard, 1 ½ inch spurs and weighed in at 21 lbs.

This was my 82 turkey with my bow and one that I won’t ever forget.  I want to thank my sponsors especially Grim Reaper for building the very best broadheads on the market.  If you’re going to hunt gobblers with a bow I highly recommend the ‘Whitetail Specials’ 3-blade / 2 inch cut. Trust me, it is one tough head, that when you hit em right, drops em in sight and they fly like your field points.