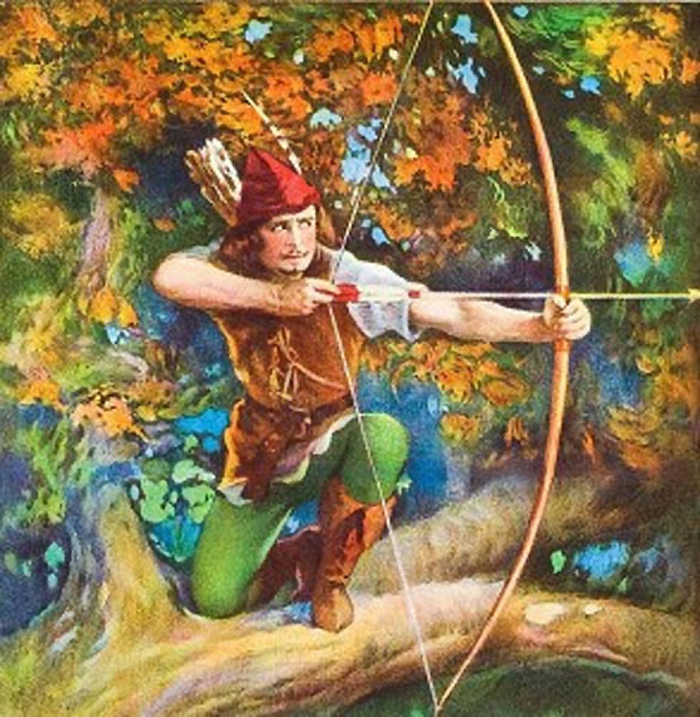 The Tales of Robin Hood caught many a young man's fancy for the bow.

What is it about archery that kings would pass laws demanding that all boys have a bow and arrow or pass laws banning other sports to facilitate more time to practice archery? Unfortunately, today those laws are either off the books or no longer deemed relevant, yet the sport still thrives and continues to grow. Archery truly has proven to be a sport for the ages, referenced in mankind’s oldest writings, mythologies, and even in modern advertising campaigns. When an advertiser wants to make a point about “being on target,” he or she invariably uses the iconic arrow and target. Even your computer cursor displays the arrow head to indicate where you are on the screen. Archery, it could be argued, was the original “point-and-click,” or thud, as the case may be.

The bow and arrow is universal in its appeal, utility, and procedures; by procedures it is meant that the basic principles that are used to accurately employ the tool are the same regardless of type of bow, location, or societal progression. The natives of the Amazon use the same technique as an American bow hunter with a $1000.00 set up.  Gervase Markham commented in his book The Art of Archerie (1634): “Shooting is an art necessary for the knowledge of all sorts of men, useful both in peace and war. It is an honest pastime for the mind, and a wholesome exercise for the Body, not vile for great men to use, nor costly for poor men to maintain….” For thousands of years the bow and arrow has been the tool most used to put meat on the table, defend families, and fight the wars of the world. In war, archers were the snipers of their day; the skills of the hunter were and are instrumental in stealth warfare. Tracking, camouflage, silent movement, patience, and situational awareness were the skills that made the users of this tool so valuable to their families and countries. The self?discipline required to be successful with the bow and arrow is a skill that encompasses all of the skills mentioned above and more; it does no good to hit the bull’s-eye every shot if crashing through the woods in haste makes so much noise that all the game or an enemy is alerted to your presence. Confucius once said of the archer, “In archery we have something like the way of the superior man. When the archer misses the center of the target, he turns round and seeks for the cause of his failure in himself.”  This, also, can be applied across the skills of the warrior/hunter. It is because of these skills the hunter was celebrated through most of human history; the hunter provided food, protection, and knowledge for all the people of his community, much like our warrior heroes of today fighting the war on terror.

Tales as old as civilized man celebrate the hunter heroes of their time, gods and goddesses of the hunt and the skills of archery were passed on in the oral tradition and then in literature. When military needs arose those same hunters were the generals and officers because of their skills, honed by time in the wild, providing food for their families and communities, as well as their skills in arms and situational awareness:  reading the enemies actions, knowing how to set ambushes based on those actions, reading terrain for tactical advantage, and creeping close to the enemy for raids or gathering intelligence. Of the most valuable skills of the hunter/warrior is the knowledge that profound patience is required to succeed in all that one does and that each mistake is a time for learning, not surrendering. The spirit of the hunter is the spirit of the warrior, and that transcends time and location.

Today’s warriors  are, and rightfully so, admired for the same reasons Apollo, Artemis, Ajax, Odysseus, Robin Hood, William Tell, and a host of other nameless heroes have been  throughout history; they epitomize patriotism and self-reliance; it is the reluctant warrior called upon at the most perilous time who selflessly serves for the good of all.

Since the advent of the compound bow in the 1970s more and more people of all demographics and physical abilities have been able to participate in the sport of archery. One demographic that has benefited most from the technology of the last 40 years is the disabled. Archery has proven to be one of the few sports that can include everyone, regardless of physical ability, and allow everyone to compete on an equal footing with those who are not disabled. Cerebral Palsy, Spina Bifida, paralysis, missing limbs, blindness, and even super geekdom are not impediments to archery excellence. This is particularly important in recent years with our returning wounded warriors, many of whom had been hunters and archers prior to their injuries in Iraq and Afghanistan. Once again the sacrifice of our warriors brings light and benefit to a much larger demographic. Most disabled people are able to participate in archery without the need for adaptive equipment, and those who do need adaptive equipment do not need to invest a fortune to partake in archery; a simple chew tab–a leather strap that attaches to the string and is gripped with the teeth–allows those missing an arm to draw, aim, and shoot a bow;  a bi-pod or tri-pod attached to a crossbow or with a platform on which to rest a crossbow, and a myriad of other inventive devices (many developed by afflicted archers),  all facilitate disabled participation. Of course there are those who suffer from the most egregious injuries and diseases that virtually disable the entire body, yet equipment exists that operates on the sip-puff principle, enabling shooters to continue in the sport via use of the crossbow.

We all know the kid who always got picked on at school, the one who was the last choice for any game, picked on by the football and basketball teams, and couldn’t throw a ball to save him- or herself. Archery, however, transcends these “non-athletic” clichés in two ways: (1) it raises self-esteem by instant gratification, and (2) regardless of athletic ability all who participate are on an equal playing field and excellence is determined by sheer dedication and practice. It shatters preconceived and ethereal barriers that have existed for generations; there is nothing finer than watching the captain of the football team lose on the archery range to the quiet kid in the corner. By this simple act both the captain and the kid in the corner may begin to talk and find they can help each other in their own way. Once that begins,  traditional prejudices fade away.

It truly is remarkable that a tool invented over 25,000 years ago can and should be the tool that can unite virtually everyone in one game that teaches self-reliance, self-esteem, hand-eye coordination, physics, history, and a host of other life lessons including the value of family time outdoors in a passive and fun manner based in good will and friendly competition. The Glory of Archery is that it has something for everyone, can be practiced by everyone, and is enjoyed by everyone at some level. The only thing that makes it more glorious is when it is shared with family on a sunny, spring day.

'5' Ways to Sharpen Your Knife - Without a Sharpener