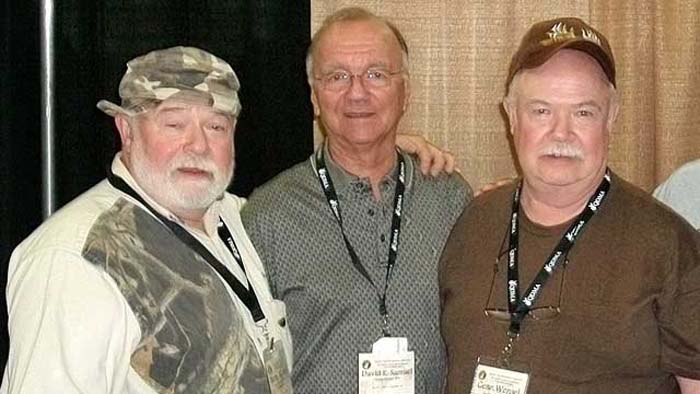 Here we are at a recent PBS meeting. Barry on the left (hat tilted is his normal way, me in the middle.

Sometime in the 1960’s I joined the Professional Bowhunters Society.  And sometime in the 1970’s, via that organizations publications, I was exposed to Gene and Barry Wensel.  Identical twins who shot recurve bows and took monster bucks in Montana.

In 1981, Gene Wensel published “Bowhunting Rutting Whitetails,” and I learned more about hunting big bucks in two nights reading than the previous twenty years bowhunting.  I just pulled my ragged, well-worn copy from the shelf and inside the front cover, it reads, “Good hunting Dave—Hope to meet you someday soon.  Gene Wensel, 10/10/81.”  I’m not sure when we finally did meet, but over the 33 years since that time, I’ve become friends with Gene and Barry.

In that first book Gene talked about scrapes, pointing out things that wildlife researchers didn’t learn for another twenty years.  Here is an example.  On page 36 Gene wrote, “He (referring to a mature buck) is so different that we have to think of him and hunt him as if he were an entirely separate species.” On page 38 Gene wrote, “It’s wrong to think that each buck deer stakes out an individual territory marked by his own rubs and scrapes and attempts to hold down his own ground.”  Cameras today show us that many bucks of all ages visit scrapes.  That book was a gem.

Six years later Gene wrote another classic titled “One Man’s Whitetails,” and by then all bowhunters knew that these brothers were way ahead of their time.  As their website (www.brothersofthebow.com) states, when Gene wrote this book, “There were no videos, DVDs or television shows about deer hunting in those days. Specialty magazines were non-existent. One could count on one hand the number of hunting magazines on newsstands. Many books were so old they offered little more than ancient history and market hunting techniques. No one raised deer in those days. A live Boone & Crockett whitetail had never been photographed. Camo was mostly military. Things like food plot seeds, compound bows, carbon gear and trail cameras were unavailable.”  Yes, it was a long time ago, but the Wensels were learning things that deer biologists would not confirm with real data for many years.  As a wildlife professor who knew a little about deer, every time I walked away from a discussion with Barry or Gene, I just shook my head in amazement.  We all walk through deer woods, but when these guys do, they observe a lot more than the rest of us.  A lot more.

The Wensels had knowledge, shot recurves as if they were born with them in their hands, set ethical standards that many emulated (and a few fools ignored), and passed on that knowledge to thousands of us.  Yes, and they did it with a great, sometimes a bit weird, sense of humor that carries on to today.  An example of that humor can be seen on the inside front cover of one of Genes later books, “Come November.”  My copy was loaned to a friend (and I don’t know who that was) and I never got it back, but I remember the inscription inside the front cover.  “To my good friend Dr. Dave.  The only guy I know who has a twin brother uglier than mine.”  (Yes, I have a twin brother.  There’s a scary thought for you).  And while we are on books, Barry came out with a wonderful book in 2009 entitled “Once Upon A Tine.”   It too is a gem.

Over the years these brothers gathered a lot of outstanding videos of free ranging deer and other species.  Around 2009 (I’m not sure of the exact date, but this is close), the Wensels got together with two other brother/friends, Mark and David Mitten from Illinoi, guys who also had tons of video, and they produced a video titled “Primal Dreams.”  In my mind this is the finest “hunting” video ever made.  Two hours long with breathtaking scenery and incredible footage of animals in their natural habitat.  Interesting is the fact that there are no kill shots in the film and few dead animals as well.  But this video, more than anything ever produced, lets the non-hunter know what hunting is really about.  As their website states, “For those who hunt, it stirs the instinctual primal need we feel to hunt. For non-hunters, after soaking in the experiences, they say, Wow, NOW I get it! Now, I understand why you hunt, and I’m OK with it.” 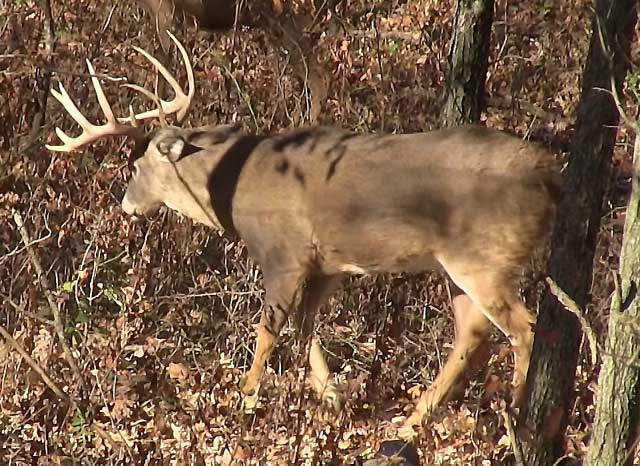 These two sets of brothers wrote the script, edited the film, narrated the film, put the music together and produced an award-winning video that every hunter, every bowhunter, should watch.  It earned 3 Telly awards for cinematography/video, editing, and Use of Music.  And when you’ve seen it, and your wife and kids have seen it, and your neighbors too, then you need to give it to your kids teachers and then to the local library.  It is that good.  Actually, it is better than that.

A few years later they came out with a second video, “Essential Encounters.”  If you ever wanted to show friends, family, neighbors, why you hunt, these videos do just that, and better than anything that has ever been produced.  Yes, give them as Christmas gifts to your hunting and non-hunting friends.

A few years ago I took five of my friends to Barry’s Trophy Whitetail Bootcamp in Iowa.  It was the best 2 ½ days of learning about deer hunting that I’ve ever spent.  Barry walks you into his woods, to his stands, and teaches you exactly why that stand is where it is.  I thought I knew how to get to my stand, but I didn’t.  I thought I knew how to set a stand relative to wind, but I did not.  Barry explains the terrain, the approach, the wind, and a lot of other variables, some of which I’d never thought of.  You can watch all the videos and read all the books and watch all the TV shows on deer, but getting in the woods with Barry Wensel will teach you more than all those things put together.

His sessions will run again next March and April, so next fall go to their website for information.

The title of this column is “The Future of Hunting.”  What do the Wensels have to do with that?   Everything.  The Wensels live the future of hunting.  It is found in their hunting, their speeches, their books, and their videos.  Ethical hunting, the values of hunting, why those things are so important, is in the blood of Barry and Gene Wensel.

Dr. Burkenstock’s ‘That Itch Stuff’ – Be Itch Free and Enjoy the Outdoors

Bloodsport Crossbow Arrows: Get the Most out of Today's High-Speed Bows