by Ashlee Lundvall
in Bowhunting Posts
0 0
A A
1 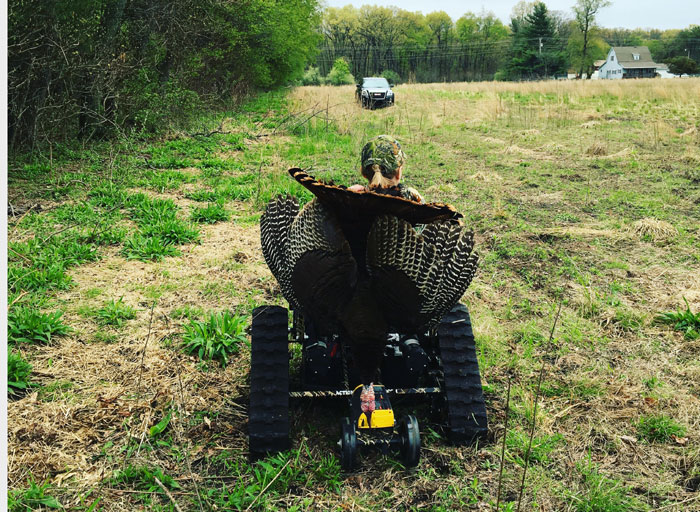 Author on her way back to the house with her Hoosier thunder chicken.

Although I grew up 20 miles northwest of Indianapolis, I didn’t begin hunting until after I moved to Wyoming with my husband in 2007. I had always been interested in turkey hunting, but my friends and family in Cody were mostly big game hunters, and the opportunity never presented itself- until this year. When a friend of mine mentioned a turkey hunt in Indiana for those living with a disability, the irony was obvious. I would be heading back to Indy, a place where I had never hunted, to hunt an animal I had never harvested. Sounded like an adventure to me!

Turkey Tracks was founded in 2009 by Eric Corey and his parents, Doug and Carol Corey. Eric was an avid outdoorsmen and hunter when he was diagnosed with ALS when he was just sixteen years old. Determined to keep hunting and allow others the same opportunity, Eric and Turkey Tracks hosted their inaugural hunt with a few local kids in rural, Northern Indiana. Since then, the hunt has grown substantially, and in April of 2016, 36 hunters gathered in Knox to enjoy a weekend a chasing Hoosier thunder chickens.

I had no idea what to expect when I landed at the Indianapolis airport and drove north towards Starke County. I checked in to my hotel on a Thursday evening, and headed out Friday morning to check in, meet my guide, and pattern a borrowed shotgun. I was pleasantly surprised by the friendliness, organization, and excitement in the air as I introduced myself and signed the needed paperwork for my Indiana turkey license. I knew then that this was going to be a great weekend.

We headed out Saturday morning before sunrise. Creeping through the dark, we found our blind and settled in to listen and watch for birds. Although we knew there were gobblers in the area, they didn’t seem interested in coming in to our decoys. Finally, later in the morning, a tom and jake suddenly appeared in the clearing and headed straight for us. I put my bead on the gobbler’s neck and waited for him to stop. He finally turned and paused for just a moment at 10 yards and I pulled the trigger.

I smiled and looked out of the blind expecting to see a dead turkey on the ground. Instead, I saw a very live turkey heading as quickly as possible in the opposite direction before disappearing into the woods beyond. I was shocked and couldn’t understand how I had missed that shot. Reviewing the camera footage showed that I had shot about an inch over his head. At that close range, I hadn’t completely understood the full turkey choke on the borrowed shotgun, nor the differences between having only a front sight, as the firearm had, as opposed to front and back sights, which I was more accustomed to. Lesson learned, and I was determined to put this information to good use if I was offered another chance at a turkey.

Between the pouring rain and cautious birds over the next twenty four hours, I was getting nervous that I had blown my only chance to get an Indiana turkey. By Sunday afternoon, I knew that it was a great possibility that I would be heading home with empty hands, but a heart full of amazing memories and new friendships. In the final hours, I was given the opportunity to head to a new piece of ground that hadn’t been hunted hard that weekend. We packed up our gear and started out.

After getting situated and putting out a few calls, we settled to wait for a bird. We were shooting the breeze when out of nowhere, three toms came booking in toward our decoy. I sat up, swung my shotgun around and attempted to lock in on the lead turkey. Unfortunately, the trio was very close together and as they circled the decoy, they never separated enough to get a clean shot at one without risking hitting all of them. Then, suddenly, they started off toward the woods. I was not about to miss another opportunity so I stayed on them as the moved away. At the last moment, the lead tom veered off to the left and turned for a final look at the decoy. Lucky for me, bad luck for the bird.

I pulled the trigger and he flopped over at thirty yards- my redemption turkey was down! Celebration ensued and I was incredibly thankful for a second chance. It was a weekend of firsts for me. First out of state hunt, first turkey harvest, first time hunting with guides I had just met. It was also a weekend I will never forget as I learned the importance of perseverance, learning from my mistakes and the power of one young man’s dreams to share his love for hunting with others.

Sadly, Eric passed away in January of 2012, but not before he made sure that his legacy would continue on through the lives of countless other hunters, guides, and volunteers. Turkey Tracks has spread beyond Indiana and now hosts hunts in Tennessee and Michigan. One remarkable young man had the wish to pay it forward and his desire to inspire others will be felt through the years as these opportunities for life changing memories continue to be made.

If you would like more information on Turkey Tracks, as a hunter, volunteer, or donor, please visit their website at http://turkeytracks.org/, or contact the organization at 574-772-5567 or turkeytrackshunt09@gmail.com.

For more please go to: The Disabled Archer & Ashlee Lundvall

Versions of the Poor Man's Foodplot

How to Accessorize Your Ground Blind