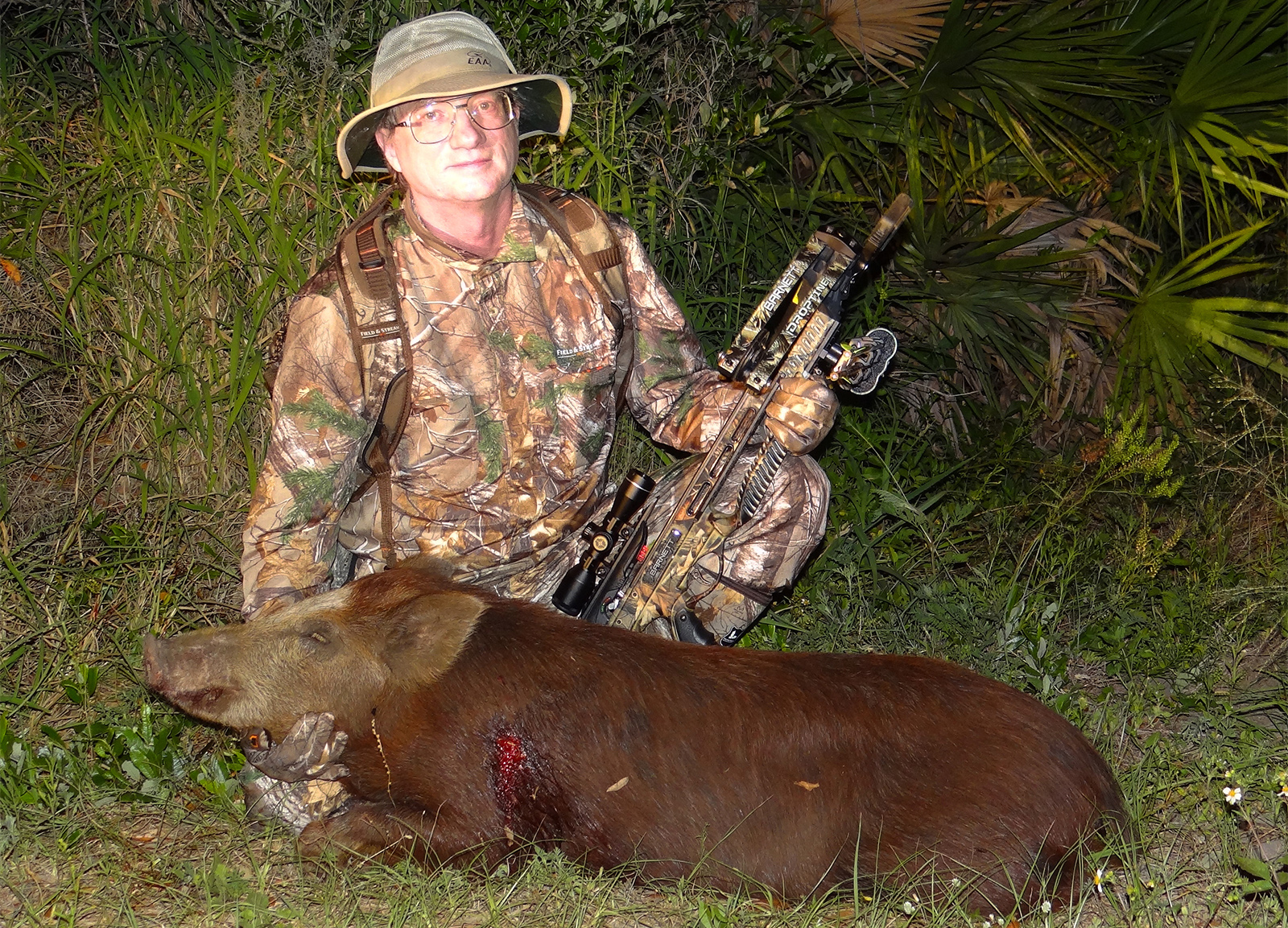 ArrowTrade’s Tim Dehn Watched Wild Hogs Walking Through The Palmettos and Florida Scrub Trees. Tim Did Not Have A Shot … Until…

When our Writers Camp group arrived at the Boar’s Nest to hunt wild hogs the guides gave us a brief orientation on the area and how we were going to hunt the hogs. Afterward, Tim Dehn wanted to check the sights on his Barnett Droptine crossbow because traveling on an airline sometimes gets something out of adjustment during transit. He hooked up his crossbow stringer and cocked his crossbow. 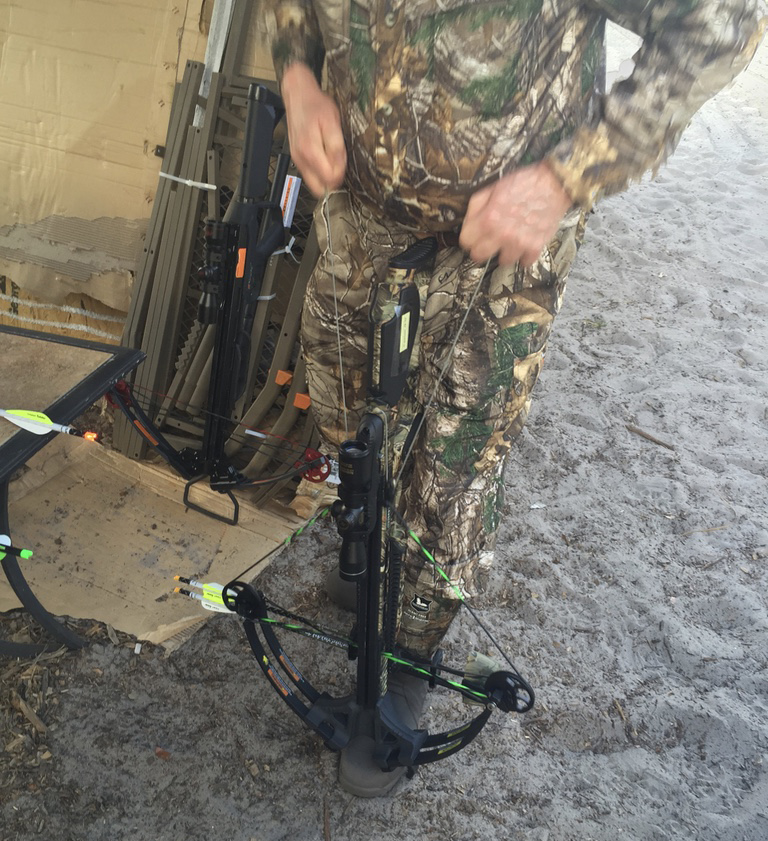 Tim took a few shots. Sure enough, the trip’s rough handling of luggage resulted in his bowsight coming out of adjustment. Tim shot and worked with the sight and soon had it sighted in perfectly. 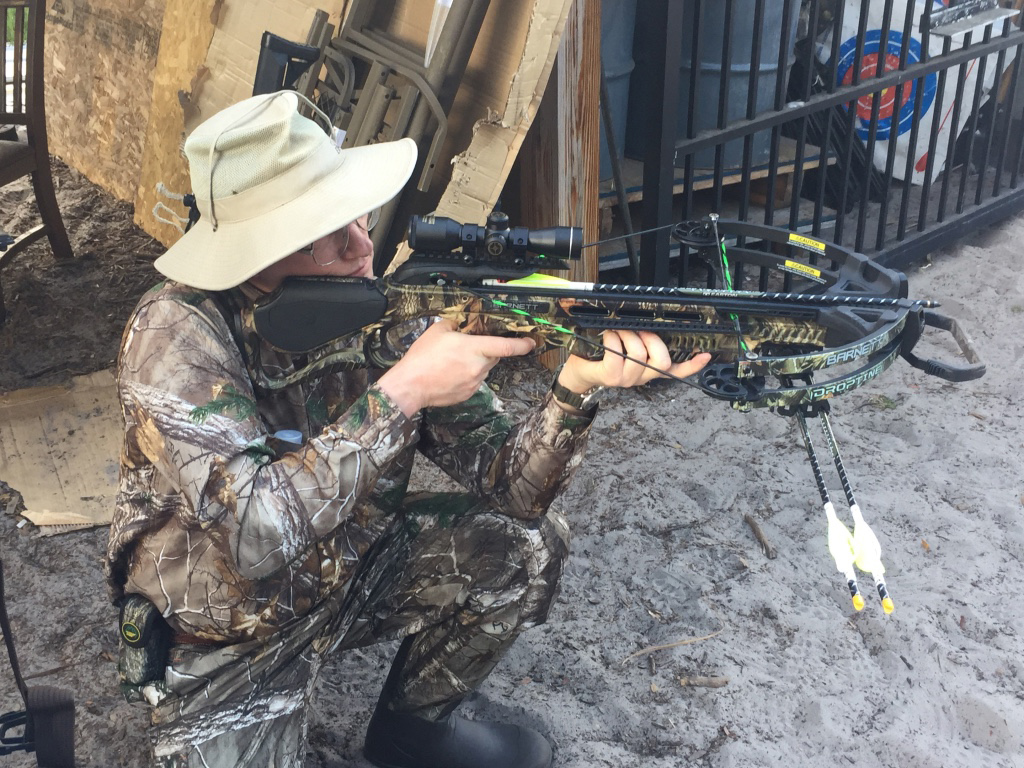 After re-sighting Tim gathered his gear and was ready to go to the stand and hunt wild hogs.

Then Tim loaded up on an ATM as did outdoor writer Joe Byers and they left down the woods road for their hunting areas. 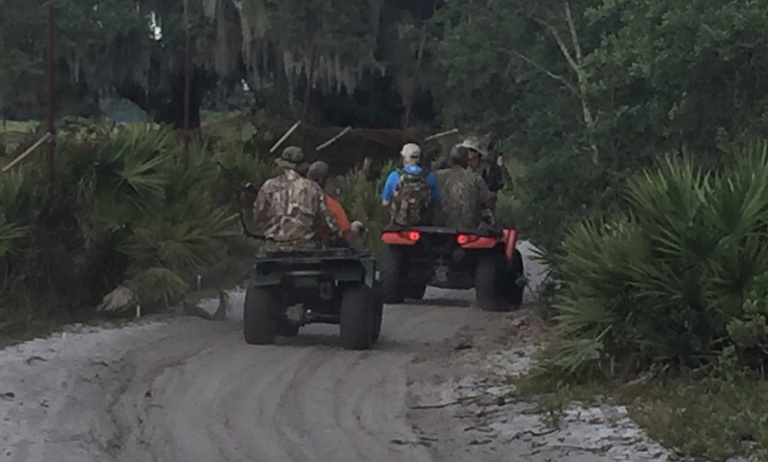 Tim Dehn’s hunting area had a ladder stand and Tim climbed aboard and after fastening his treestand-safety-belt he pulled his crossbow up to the platform. He sat down and watched the Florida palmettos and scrub oaks of the woods around him as time passed.

It was a hot Florida afternoon.

Field & Stream Stores had sent clothing for all the writers to use and Tim Dehn took this opportunity to check out the C3 Balaclava Long Sleeved Shirt and C3 Pant. These garments minimize odor with NOSCENT™ C3 technology in Zeolite that recharges with every washing. And SMARTWICK™ technology wicks sweat away to keep you dry while the garments 4-way stretch jersey provide a full range of motion. Tim reported to me that the F&S clothing fit well and was breathable and kept him comfortable even in the afternoon heat. His hog had come from down wind so the NOSCENT worked perfectly.

Later, an hour before dark, Tim saw movement in the palmettoes. It was a small group of wild hogs. Their course took them 50 yards from Tim’s ladderstand. It was further than Tim wanted to shoot.

For some unknown reason one of the wild hogs separated from the group and walked in Tim’s general direction. The hog followed a scant trail through the palmettos. Tim raised his crossbow in case the hog came in range. It did, and Tim put his pin on the hog’s vitals when it was only 10 yards away.

Tim saw the Lumenok on his crossbow bolt disappear the hog’s rib cage and stick in the ground behind the hog. It ran in a circle and went down nearby in the palmettos with a loud crash.

Tim called his guide and told him he had shot a wild hog. The guide told him he was leaving immediately to make the recovery. When the guide arrived Tim showed him where his arrow was laying and the guide started on the zig-zag blood trail. Tim saw the hog first and they drug it to the ATV, strapped it on, and drove back to the hunt headquarters.

Tim’s hog was the only one taken this first afternoon. I took pictures of Tim and his Florida wild hog for him. 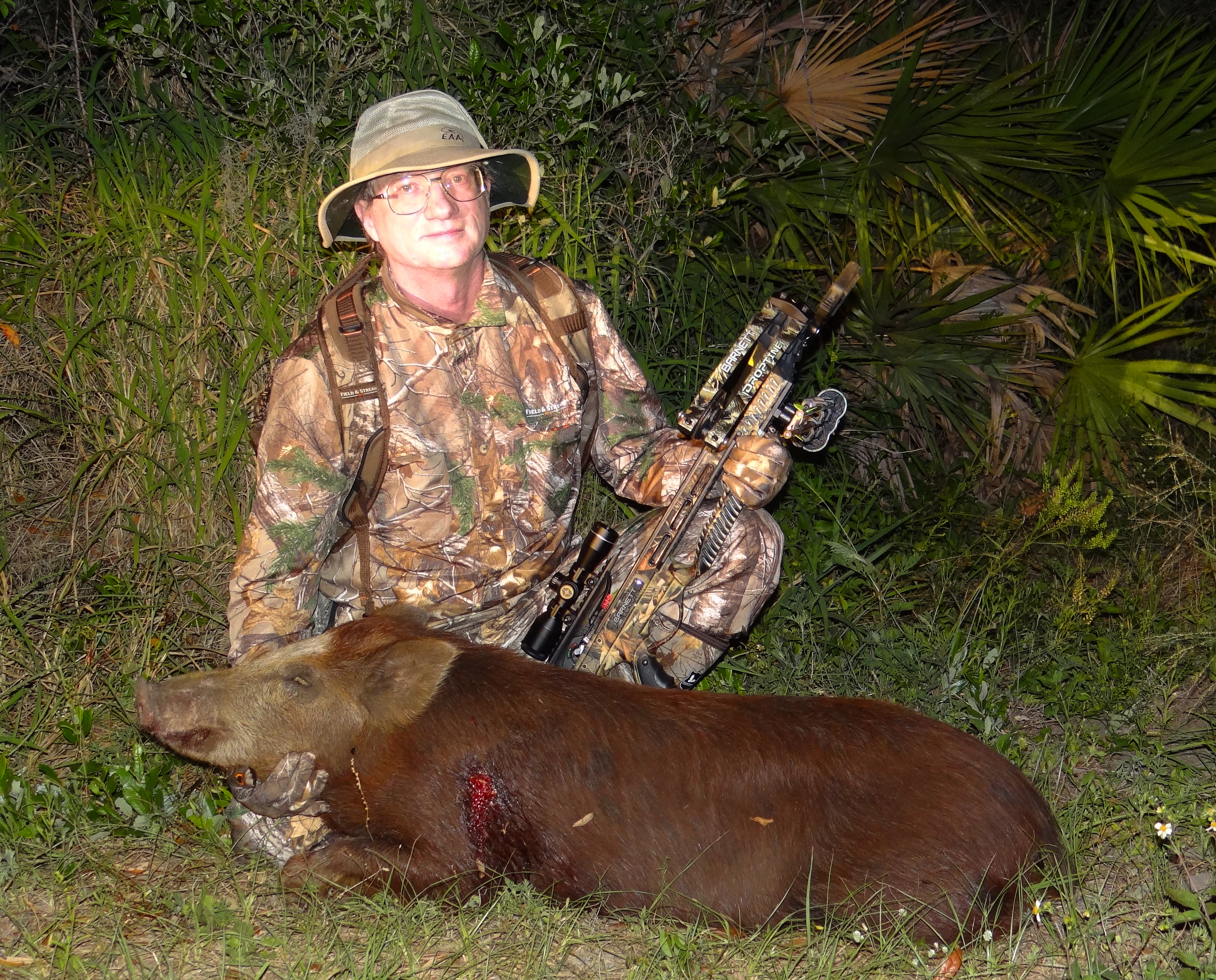 And here is a pic with the Writers Camp group. 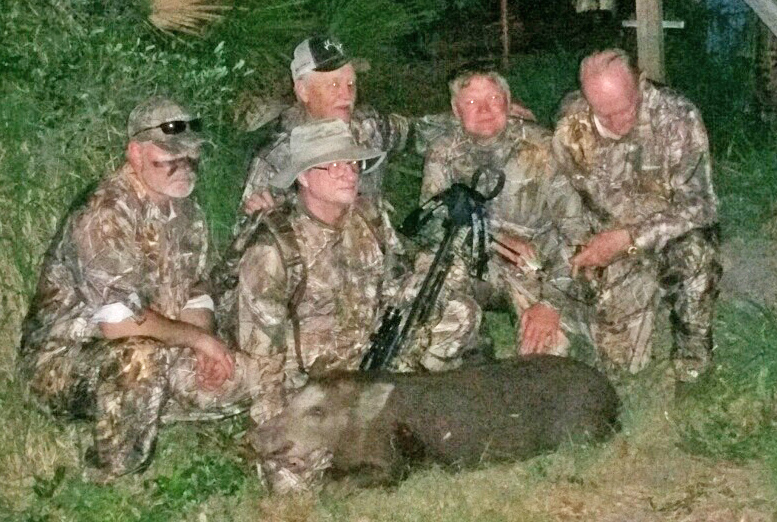 This Writers Camp was organized by Wade Nolan of Whitetail University. At the company end we have people from Atsko, Field & Stream Stores and Swhacker Broadheads. The outdoor writers are Joe Byers, Josh Honeycutt, Tim Dehn of Arrow Trade magazine and the founder of the website Bowhunting.net, Robert Hoague.

‘5’ Ways to Sharpen Your Knife – Without a Sharpener

'5' Ways to Sharpen Your Knife - Without a Sharpener