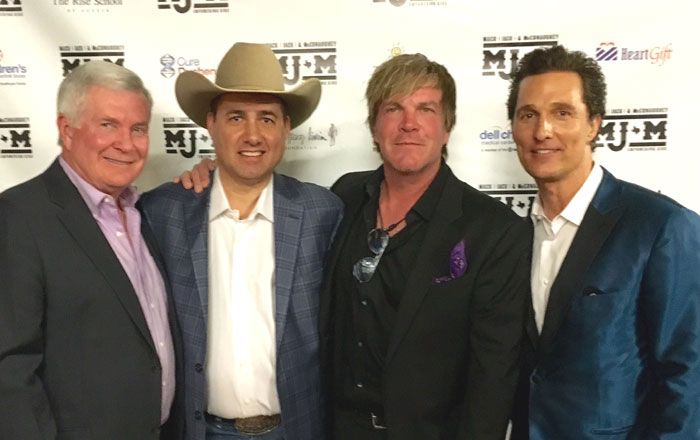 As an exhibition shooter I perform at a lot of sport shows,expos and those type of events. I also appear at Cabelas and stores like that around the country.  I have also done several shows for companies, corporate retreats, and private shows for celebrities,  Church groups and such.  I did a show in Austin, Texas this Spring that is a very unique event.  It features country singers, celebrities and lots of football legends.  Here’s the story.
I’ve always said that my friend Coach Mack Brown has a lot of heart. When he teamed up with singer Jack Ingram and actor Mathew McConaughey to form Mack, Jack & McConaughey (or MJ&M)  it was the perfect combination to host a wonderful event to raise money for five worthy children’s charities. Like all good fund raisers this one has great music, celebrities and great food in beautiful locations. The Gala and concerts are held at the Austin City Limits at the Moody Theater in Austin. There’s also a fashion show and of course there is a golf outing held at the beautiful Spanish Oaks Golf Course. Thousands of people from all walks of life and from all over the country enjoy this one of a kind event.

My wife and I attended the event in 2015 and had a great time. When coach Brown asked me to do an exhibition for the event, I was happy to do an archery show to entertain the attendees with some bow and arrow razzle dazzle. It was a huge honor to have this opportunity.    One of the highlights of my job is getting to take archery into some very cool venues where you usually don’t see archery!

We set up the show at Spanish Oaks Golf Course and did the show just before the tournament started. Coach Brown did the introductory remarks and then my friend Frank Perry put various targets in front of the net for me to shoot.  Frank is a good friend and has done several shows with me in Texas.

We ended the show with a tough shot– three tiny 81 mg aspirin (smaller than a baby aspirin) tossed into the air at once.  I shot three arrows and hit the pills first try with my Hoyt bow behind my back. After the show Mack, Jack and Mathew all signed my bow.   This bow will be retired at the end of 2016’s Fall shows.   Coach Brown and Earl Campbell signed one of my other show bows in 2011 and that bow is now retired too.

This marked the 4th year of the Mack, Jack & McConaughey event.  The events raised $1.7 million to support CureDuchenne, Dell Children’s Medical Center of Central Texas, HeartGift, Just Keep Livin Foundation and The Rise School of Austin. For more information about how you can help or attend the 2017 event, visit: http://www.mackjackmcconaughey.org
I’ve already been asked to do a show at the 2017 event and I obviously agreed.  It’s a huge honor to play a small part of such a worthwhile event.
For more info on my show simply visit: www.Frankaddingtonjr.com.

No Odor Oxidizer – The Better Way to Smell Clean

Reliable Alaskan Gear May Save Your Life

Who Ultimately Wins An Argument?