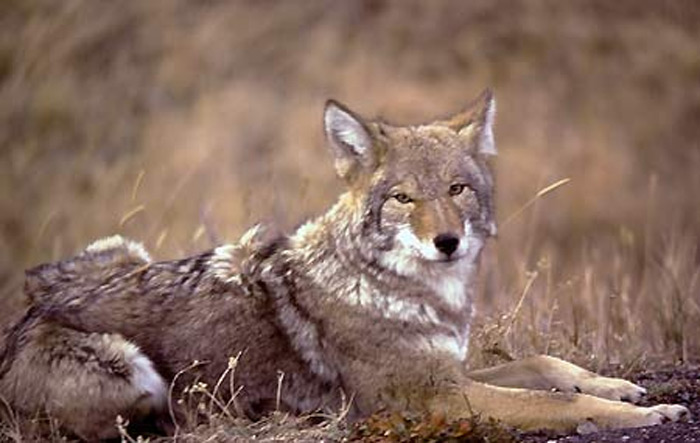 The coyote is a master of adaptability and can survive and flourish in most any type of terrain in the United States.

The large male coyote cruised along the lower bench of the ridge that overlooked a brushy field.  He was heading back to a rocky outcrop after a poor night of hunting.  A heavy rainstorm during the night made hunting difficult, but the rising sun indicated that it was time for him to head back out of the fields and into one of his daytime hiding places.

The large male coyote cruised along the lower bench of the ridge that overlooked a brushy field.  He was heading back to a rocky outcrop after a poor night of hunting.  A heavy rainstorm during the night made hunting difficult, but the rising sun indicated that it was time for him to head back out of the fields and into one of his daytime hiding places. 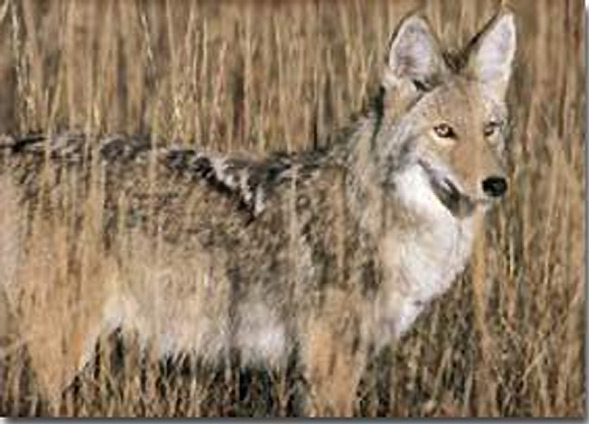 Something caught his attention over the crunching of the leaves and he came to a stop and rotated his ears back and forth to try to determine what it was that caught his attention.  There, again, he heard something, and this time he was able to instantly pinpoint the direction, distance and location of the sound.  It was a sound he had heard many times before.  It was the sound of an easy meal, and a meal that he was surely in need of.

He immediately turned toward the sounds and went into a semi-trot to cut the distance as quickly as he could.  The sounds were coming from up near the top of the ridge in the rocky outcroppings where he had hunted many times before.  He continued up the ridge until he was on the same level as the sounds were coming from and began his final approach to his meal.  The sounds stopped and he stopped also and stood for a while examining the woods in front of him.  He began to circle higher up the ridge to try to let his nose find the source of the sounds he had heard.  He knew that he was close to his meal and as he started his circle he caught motion.  There, there was the meal he was looking for just down the ridge.  He could see it thrashing around just ahead so he locks his eyes onto his victim and turns to make the final stalk.

Little did he realize just how final this final stalk was to be for him.  The well camouflaged bowhunter above him was already at full draw and settling the green pin just behind his shoulder.  The trigger of the release moved backwards and the broadhead was on its way to put the seal on this piece of outdoors drama.  The hunter had suddenly become the hunted and the prey had become the predator.

Bowhunting for the coyote is an extremely challenging and rewarding adventure.  For sure a person will have more predator success using a rifle or shotgun than they ever will using archery equipment, but then again it is this very challenge that makes us bowhunters to begin with.  A big part of improving your odds of being able to have consistent success is to intimately know your quarry.

It is very important to understand the behaviors and life cycle of the animals that you are hunting.  It improves your odds of success and it makes the whole hunting experience a more rewarding adventure as you learn more about another piece of nature.  In this fashion you are less an intruder in nature, but more an integral part of the world in the wild.  The first predator that we will cover is the coyote.

The coyote (Canis Latrans) is a very adaptable creature and is increasing his range daily and if you don’t already have coyotes near to where you live then it is only a matter of time before you do.  The coyote is an omnivore that eats both plants and animals.  It prefers to eat animals though and its main diet consists of smaller prey species such as rodents, rabbits, squirrels, house cats and small dogs.  It will also sometimes catch and kill larger animals such as fawns, sheep, goats and calves.  It will take advantage of any carrion that it comes upon during its daily travels, and it will also eat fruits, berries and eggs when it finds those.

The coyote male is larger than the female and an average male coyote will weigh about 30 pounds and the female about 25 pounds.  The Eastern coyote grows larger than its Western counterpart and many coyotes in the East will weigh in excess of 50 pounds.

There are some who say that the Eastern coyote is larger due to interbreeding with wolves, and this may very well be the case.  There are also instances of domestic dogs breeding with coyotes with the resulting offspring being called coydogs.  The normal color phase of coyotes is a grayish coloration.  I have noticed that the females generally have more of a reddish coloration than their male companions.  There are also other various colorations such as black or white, but these are quite rare.

The basic unit of the coyote is a family group which will consist of the male, female, and any of their offspring that is still with them as well as some bachelor juvenile males and older females.  The group does have a hierarchy with an alpha male and alpha female controlling their territory. The coyote is a very territorial animal at most times and does not easily tolerate any coyotes outside of their immediate family group.  This family group is somewhat loose knit and the coyotes may not be in the same general location with one another, but will be somewhere within their home range which they guard as best they can.  You will often hear howling and barking as it gets dark and often early in the mornings as this family group communicates their individual location for the rest of the family group.  The coyotes will sometimes hunt in packs and some of the communications are used to gather a hunting group together.

The breeding season of the coyote is generally in late January through February for the more Southern states and about a month later for the Northern states.  The female will excavate a den into a hillside or berm or take up a rocky shelter to have her pups which are born about 63 days after she is bred.  The number of pups born is regulated by the amount of available food in the region.  The better the food sources the more pups will be born.  During this time of gestation and rearing the male may be the only member of the pair doing the hunting and will bring food back to the female for her and her pups to feed upon.  The pups will stay with the female until later in the year and will most times disperse out to seek their own territories and possibly seek out their own mates by December of the year they are born in.  This is a large part of the reason for the rapid expansion of the coyote throughout the United States.

Coyotes can be located after dark by listening for their individual and group howling.  The coyote has a very large vocalization upwards of a dozen sounds or so and the coyote hunter should become familiar with as many of those communications as they can.  You can also scout along dirt roads, trails and creek beds in the area looking for the telltale tracks and scat of the coyote.

A coyote’s track look very much like that of a dog, but the track will have more of a pointy elongated shape than of a dog has.  The front paw tracks are larger than the rear paw tracks and a domestic dog will generally have more symmetrical tracks.  The coyote track is about 2 ” in length and will often times have the front and rear track overlapping.

You will often times find coyote scat on dirt roads as the coyotes will often travel these roads on their patrols through their territories and they will mark their territory by depositing this sign along with urination and ground scratching along their travel routes.  The coyote scat will most always contain large amounts of hair and often small bones as they eat their prey hair and all.

The coyote has some extremely good survival tools at their disposal.  They have very good eyesight, they can hear extremely well and their sense of smell has been determined by some to be more than 10,000 times better than a human.

They are known to be highly intelligent, although I think a large part of this apparent intelligence should be more attributed to their extreme senses and instinct than to any sort of reasoning ability.

The successful coyote bowhunter will have to overcome all of the coyote’s senses and do so at very close range.  This makes bowhunting coyotes a very challenging task to say the least, but it is quite doable on a very consistent basis when one understands the behaviors of the coyote and uses those mannerisms to full advantage.  It is these behaviors that help to keep the population of coyotes expanding and by knowing this behavior you can design your hunting strategies around them.

In this ongoing series of articles I hope to help you better learn the quarry, equipment, tactics and techniques that will enable you to be more successful in your own predator hunting.  It is never going to be an easy thing to take a predator with your bow, be it coyote or bobcat or another predator, but I do believe together we can up your odds of doing so over the coming months.  I encourage all of those who have not tried predator hunting with their bow to take advantage of the generous seasons and the ultimate challenge of this style of hunting.  It is an absolute thrill and in the next part of this series I will cover the equipment recommended and how to use it to help you be able to tell your own version of the story at the lead part of this article.