Hyena in the Dark

by Matt Guedes
in Bowhunting Posts
0 0
0 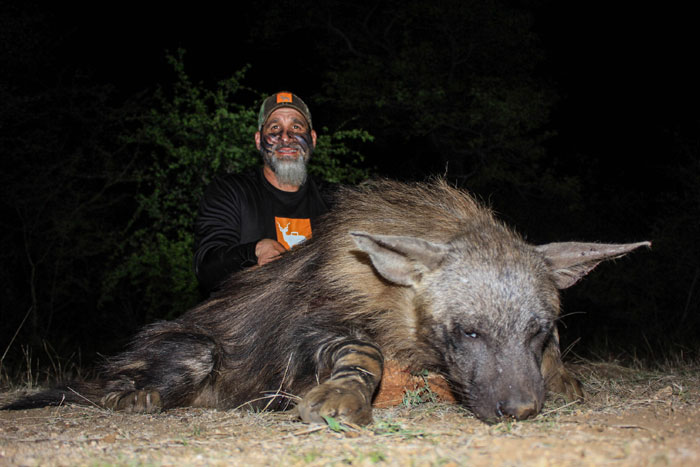 Not entirely happy about having to use a firearm rather than his bow, the author was all smiles at the result.

Whenever it is dark in the woods or wherever you find yourself hunting it allows the mind to think some very real and also some very fictional thoughts.  Whether I am in a treestand at 4 in the morning in the hardwoods of Pennsylvania or coming out of the aspens at 10 at night in Colorado, when it is dark the mind can wander.  I don’t think I am alone in this situation. There are bears, wolves, and mountain lions in the woods where I hunt in the west, yet I never really seem to think about them very often except when it is dark.  They are always there, but they occupy no spot in my mind unless it is dark outside.

On my most recent trip to Africa I had an incredible experience to hunt a Brown Hyena.  Hunting Brown Hyena or most predators in South Africa happens in the dark.  I had a client come with me on safari on a Leopard hunt and the coveted tag that he had for a Leopard continues to climb in price and become rarer.  As we were baiting with many warthogs in many locations we had a Brown Hyena continue to show up at one of the locations on the trail cam.

Based upon that information we decided that I would be able to hunt this Hyena.  My goal with this hunt was to harvest this wily predator with my brand new Bear Archery Products Arena 30.  I knew it would be challenging, but I didn’t realize just how challenging.

We went to the site of the bait that was being hit by the Hyena at 3 pm.  We set up a new warthog for bait and then set up the red light in the tree above the bait.  We ran the wire back to the blind that we then made by cutting branches from the surrounding trees.  We brushed the blind in except for two holes:  one hole for the shot and another hole for the camera.  We were hoping that the camera would pick up the action with the red light.  At 27 yards away it wasn’t able to pick up the footage with the limited light.

My PH for the hunt, and I were settled in the blind and ready for the long night at 4 pm.  It got dark around 7 pm that evening.  Right after it was dark we heard a violent scream of an animal less than 100 yards away.  Something had caught an animal and was biting it so hard that through the screams of the animal we could hear the bones crunching with the bites.  This went on for about 2 minutes.  Now with it being dark and with Leopards, lions, hyenas and who knows what other predators in the area, this definitely got the heart pumping.

After the screaming stopped we were obviously very alert.  Then we heard an animal running right toward us.  It was grunting as it ran toward us and breathing very heavily. It came right behind us and stopped no more than 10 yards away.  My heart was pounding in my chest and I thought it was a leopard by the sounds.  I couldn’t ask the PH because we were perfectly still and quiet so we would not spook it or, worse yet, become its next victim.  This animal stayed right behind us and moved around our left side for about 20 minutes.  At one point I heard him click the safety off on his 470 Nitro Express.  That made me even more concerned because now I knew he was concerned.

After this circle the animal made around us it started to walk toward the bait.  I leaned over and asked if it was a leopard. He said it was dog, not a cat.  It must be the Hyena.  I was relieved because although a hyena could attack you, it was not nearly as likely to do so as a leopard. I told him I was fine with turning the lights on and making some noise.  He laughed and we sat quietly waiting to see what would happen next.

About 20 minutes later the Hyena showed up at the bait.  He came in and started to eat the warthog hanging in the tree.  I was very excited.  It was not at all bothered by the red light we had hanging in the tree above it.   It was 27 yards away in the pitch black of the South African Bush.  The red light hanging above it made it clear to our eyes.  I turned on the light on my sight and drew back my bow.  I could see my 70 and 80 yard pins, but no other pins were visible.  I let down and the Hyena was still there eating away.  I checked the light and it was on and drew back again and the pins were not obvious.  I tried to see them against the silhouette of the animal, but couldn’t do so.

I only had a couple days to hunt this animal, so I set down my bow and asked for the 470.  He was shocked as he knows my goal is always to take an animal with a bow.  He handed me the gun. I put the open sights on the animal and was having trouble lining things up in the dark.  I settled in and pulled the trigger.  The gun went off and it knocked me back on my heels.  The animal took off.

We waited a few minutes and then went to check on the shot.  We could not find any blood or hair.  We packed up and came back the next day.  We searched for blood, hair, or any indication of a hit, but we knew there was none.  We knew because when we got to the bait the entire bottom half of it was gone. The hyena had come back after the miss.  I had missed a Hyena at 27 yards with one of the biggest guns made by man.

I was a bit happy about the missed shot.  This would allow me to get my sight set up correctly and retry with the bow that night.  We thought he would come back in again since he did that night after a shot attempt.  We set a new bait and decided to come back that night.

My bow was ready and I could see my 30 yard pin well.  We climbed into our blind and waited.  It was windy and there was a lightning storm, but we were committed to sitting and waiting for this predator.  At 7:45 pm we saw our motion indicator light up and the Hyena peeked his head in toward the bait from the right side behind a tree.  He took a bite and ran off.  This happened four times the exact same way.

It was really windy by this time and after being shot at the night before by a 470 Nitro Express, who could blame him for being so skittish.  This was going to be the last night that I was going to hunt this animal, so I had to make a decision.  As much as I wanted this Hyena with my bow, I knew it was not likely going to happen.  After he ran off for the fifth time I said, “I will take the .308.”

The decision was a difficult one to make for a diehard archery guy.  I knew it was the right decision for the circumstances given, but I still didn’t like it.  He assured me that we would have more time in the future to hunt one with the bow.  Now I sat with a gun in hand.

At 10:30 pm the motion sensor went off again.  I was sitting with the gun on a solid rest and instantly saw the Hyena through my scope.  Because of his past action that night, I wanted to quickly settle in on his vitals and shoot.  As soon as I was on the shoulder and realized he was quartering toward me, I pulled the trigger.  The Hyena instantly hit the ground and never moved.

The two of us were thrilled in the blind.  After two nights sitting in the darkness we had a massive male Hyena on the ground.  This hunt was one of the greatest Journeys I had ever been a part of and somehow the choice of taking up the gun now faded away with an awesome predator on the ground.

I will return, Lord willing, to hunt a Hyena in the future strictly with a bow.  My PH has a great system for predator hunting and after my first experience of hunting at night with a bow I am better prepared for the future.  Until the next time I will cherish the memory of this Brown Hyena.

Matt Guedes is the owner of Journey Hunts, www.journeyhunts.com, a hunting consultant business that takes clients around the world to the best hunting destinations for their chosen quarry.  As a Christ follower, avid conservationist, and outdoor writer, Matt shares his passion for the outdoors through all avenues.  If you have any questions or would like Matt to speak at your next Hunting Banquet you can contact him at matt@journeyhunts.com

For all of Matt’s Articles: Matt Guedes

10 Most Dangerous Animals In The World

10 Most Dangerous Animals In The World