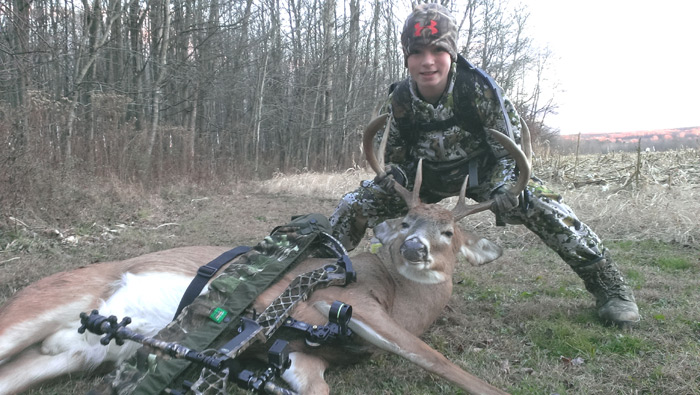 During the 2014 hunting season, my neighbor, Ron Kline, had a trail camera that captured some great photos of a young buck. This buck was a solid 2.5 year old, and he was easily recognizable due to the two tears in his left ear. Because of this unique characteristics, Ron decided to name the buck Pirate. He showed me the pictures of this buck, and we agreed to allow this buck to grow another year.

In the area of Western Pennsylvania, where I live, many bucks get harvested before they are able to reach 3.5 years of age. Ron owns 70 plus acres, and I hunt the 100 acres across the road. We both saw Pirate during the 2014 archery season and let him walk hoping he would make it through the heavily hunted gun season. As the 2014 season came to an end, Ron gathered more trail camera pictures of Pirate, and he had made it through the season unscathed. We looked at the pictures and agreed he could grow into a solid buck as a 3.5 year old.

Ron started to get pictures of Pirate in early June and through July. He was developing a great mainframe with nice tine length. In August, Pirate walked out of the 100 acres and into my front yard. My other neighbor, Dave Gill, took some pictures of Pirate along with his buddy, a huge 7 point. I gathered some great pictures of Pirate walking by one of my stand locations before he shed his velvet. My two kids, Sam and Abby loved going to get the trail camera cards to see what Pirate was doing. My son wanted to harvest Pirate with his bow so he set out to practice diligently.

During the first week of the Pennsylvania archery season, Pirate showed himself to Sam and me, as we were in the stand. He entered the woods, out of a big CRP field, about 75 yards away. He continued to cruise the short patch of woods and walked out of sight. Sam never really got to see him as he was watching the other direction. He was excited to know that he was around. I explained to him that I believed he was bedding in the huge CRP field directly behind us and that we could get him into bow range during the season. 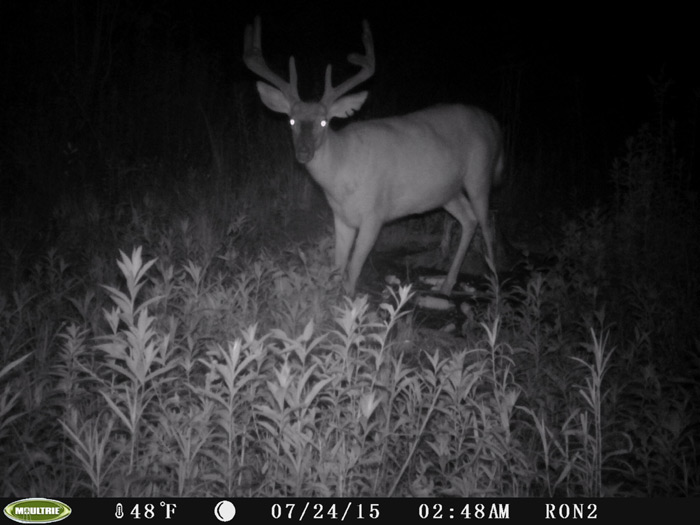 As the archery season progressed, Ron and I both kept getting pictures of Pirate on both properties. Ron had tagged out on a great 145 2/8 inch non-typical buck early in the season so Sam and I had Pirate all to ourselves.

One evening I had an opportunity to hunt from a good stand where I could see the CRP field. At about 4:30, I caught movement in the field about 150 yards away.  Pirate was using the long, large ditch in the center of the field, to travel and he was coming my way. He stopped and fed on different plants in the ditch and then continued on moving very slowly. I kept a visual on him for over a half hour. It was a perfect evening and the wind was great for my setup. Pirate was calm as could be until the farmer started the combine and began taking corn off the field behind me. He then turned and followed the ditch back from where he came. I was heartbroken but the season was just about to pick up. I was determined to outsmart Pirate and get him in bow range before the end of the season.

Late October arrived and the archery hunting was starting to pick up. Trail cameras were working overtime, bucks were starting to tear up the woods and travel more during the day. I hunted early on Saturday, October 31st, and all I saw was a million squirrels so I climbed down and went home to gather my kids for a squirrel hunt. They both were excited to go out. I also used it as a chance to scout and put some more of the pieces together to take down Pirate.

While we slowly crept through the woods, I found a serious, fresh rub line. Like I had thought, the rub line started inside the wood line at the end of the ditch that leads out of the CRP field. It continued about 50 yards to a huge scrape and then out into a new section of woods.  I explained to the kids how deer mark their territory by making rub lines and scrapes. I hung my Browning Trail camera by the new scrape and doctored the scrape with Smokey’s Deer Lures. I also located a great cherry tree to hang a stand in to hunt this travel corridor. We continued our squirrel hunt and talked about all the squirrels we would see.

On November 1st, I asked Ron if he would help me relocate a stand. I wanted to show him the rub line and the scrape Pirate had made. Ron and I hung the stand and I trimmed a few shooting lanes. I had a really good feeling about this set! On Friday, November 6th, Ron texted me to see if I was in my stand. I replied, No! He then explained to me that he watched Pirate at 8:30 am come out of the woods near my stand. He figured I might have taken off of work to hunt him that day. Nope, I was in school teaching hoping to get out as soon as school ended and get into the stand.

November 14th was the last day of the Pennsylvania archery season. I decided to wake up early that morning and hunt another section of woods down the road from me. The weather was great! Cold temps and little wind got me excited for the hunt. I sat all morning without seeing a deer. On my way back to the truck, I bumped 3 does and as I watched them slowly disappear, a nice buck crept into view as well. I grabbed my bow, nocked an arrow and used my doe bleat call to get his attention. He paused for a moment and then followed the 3 doe. I continued to the truck and thought about the evening hunt.

When I got home for lunch, I asked Sam where he wanted to hunt and gave him the 3 options we had. Two of the options involved hunting at other farms miles away. He thought for a few minutes and said, “I think we should hunt across the road. Pirate is still around and we could get him tonight.” It was settled we were heading out to our stand on the 100 acres right across the road.

Sam and I got dressed, in our G-Force Evolved Camo and slowly made our way to the stand. I sent him ahead of me and I laid down a long scent drag of Antler Ice Doe-in-Heat to the stand. I hung a few scent wicks with more Antler Ice and hoped for the best. Once in the stand we sprayed down with an extra layer of Nature’s Essence, Essence of Fall  all natural cover scent, and waited for some action.

The wind was perfect, Sam and I were hopeful for some deer movement. At 4:15 I heard a deer grunt that caught my attention. I could hear him but could not see him. Then, I caught movement.  It was Pirate, coming out of the ditch from the CRP field and he was searching for a hot doe. He was walking and grunting and looking for a way to find the doe! The Antler Ice was doing its job as Pirate cut into the woods and working our way, stopping 15 yards away behind a pine tree. Sam could not see him so I had my bow ready to go. All Pirate had to do was step out from behind the tree and it would be an easy 15 yard shot. He continued to grunt and sniff the wind as I drew, and then he stepped out and started walking away. I had one opening and was ready. The Black Eagle Carnivore arrow found its mark.  The big buck ran about 40 yards and stopped. We could hear him coughing and then we heard him go down.

Sam and I were excited as we got out of the stand and found my arrow.  Sam followed the blood trail right to Pirate who had only gone 60 yards total. He actually ran in front of my trail camera and I got a picture of him after he had been shot. Sam suggested we drag him another 20 yards and take pictures in the cut corn field while the sun was going down. We took turns taking pictures of each other with Pirate. I texted Ron and told him Pirate was dead. Sam and I went back to the house to drop off our gear and get the tractor.

Later that evening, Ron stopped over, and we talked about the hunt. I showed him pictures we took and the trail camera pictures I had. He said he had other pictures he would send me. I took some time to green score Pirate and he scored 124 3/8 as a typical 8 point. He has lots of cool characteristics and to harvest him was the end to a great game of cat and mouse. Pirate is my largest Pennsylvania archery buck to date. I was able to video tape most of the hunt and if you would like to check it out you can at: http://www.insidethehunt.com/video/490/pirate-of-pennsylvania-2015