The Buck Pickup Artist – Playing Hard To Get 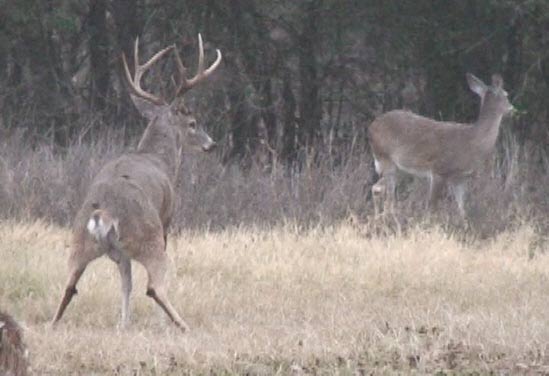 I Don’t Know About You, But I Could Handle Looking At Some Deer Pictures.

One of the things about taking thousands of deer pictures every year is that I can look back over them. And I do.

These pics were taken a few years ago during an mid season deerhunt. It began like this…

Before the season I purchased a bowsight with very bright pins but there were no reference marks for changing settings and it took quite a bit of shooting beforee I was hitting ok. So I zipped out to a Scrape area and hunted. Nothing happened and when I got back home I shot a few arrows by flashlight. But I was inconsistent.

So this morning I decided not to hunt because I didn’t feel confident in my sight, yet. At the food plot I have two blinds, one I take pictures from and one for hunting. I went to the photo blind without my bow.

After 7:00 I saw a buck I had earlier named Triple Kicker and two other bucks and a doe. Triple Kicker walked toward the doe and as I turned on my camera he squatted and urinated.

The doe stayed where she was as Triple Kicker continued to get her attention.

Then he sucked his belly up and strutted directly toward the doe.

Triple Kicker walked past the doe and the doe followed along behind him.

Then one of the other bucks approached him and Triple Kicker struck a tall, menacing profile and stopped the buck in his tracks.

Soon all the deer walked out of my field of vision. Later a doe with two of this year’s fawns came up and I noticed that they all had coal black hocks. So it’s very likely that the young does, which are good sized now, will have their first rut before long.

During mid day I shot again and adjusted my sight just a bit because I was hitting a little low. But it is hitting good now. That makes me feel a lot better.

I hunted at the Point and a racker buck came through after dark. Right then, I was waiting to be picked up or I wouldn’t have seen the racker buck.

Tomorrow morning the weather is supposed to switch to cold and frosty. I’m going to the food plot blind and waiting to see if I can get in step with Triple Kicker.