by Joe Bell
in Bowhunting Posts
0 0
1 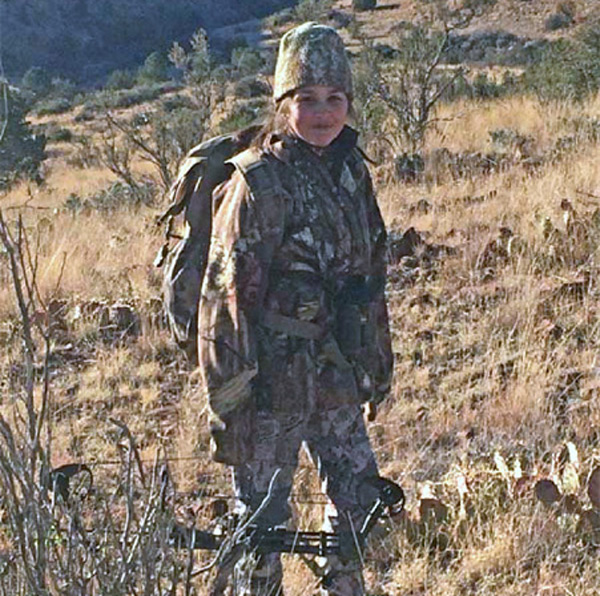 A couple of weeks ago, I started hunting mule deer around my home with my oldest daughter. She’s 14 now, and we finally got her ready enough to buy an archery deer license for the first time.

Her shooting form is rock-solid, but it took several months of shooting two-blade Magnus Stinger broadheads before she felt proficient with “bladed wings” at the front of the arrows…at least out to 25 yards or so. She’s adamant about being accurate in order to prevent a bad hit. I’ve always told her…drilling the target and drilling game are often worlds apart. In the field, there are no warm-ups and, once that arrow’s gone, you can’t take it back — ever. Why have regret for something that’s supposed to be so great and memorable? “Always make it count”…I try to reiterate and pound home. I want to be a good mentor to her during these beginning years, something I wished I had more of at the start of my own bowhunting career.

The January 1st opener came fast, and we were driving up the steep two-track to my favorite hunting spot. At the end of the road, I noticed another hunter’s vehicle. He was out with his boy glassing the nearby hillsides. I waived politely and motioned that I would turn around, being respectful of the first-come, first-serve rule when hunting public land. 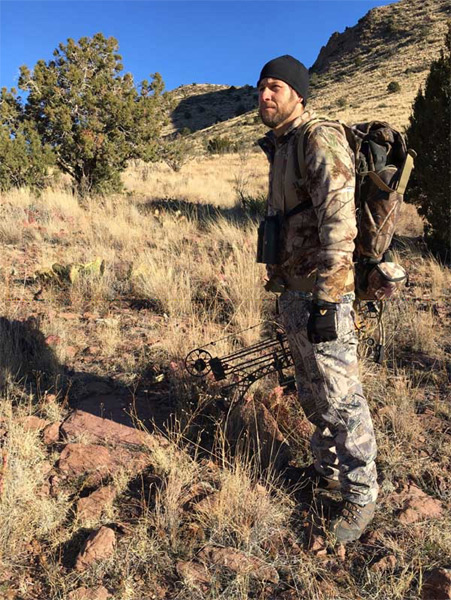 He came to the window and kindly said, “Hello.” I was a bit surprised, as some hunters can get awfully territorial over their hunting spots.

“Were you going to hunt here?” he said.

“Actually,” he said, “We are just leaving. We were just looking around. There’s actually a group of does my son is looking at right now, but there’s no buck in the bunch. We were just taking a quick look before moving on. It’s all yours.”

His attitude was gentleman like and refreshing. I’m sure this same mindset will be passed on to his son.

And, on that note, we promptly parked the truck and said “thank you.” 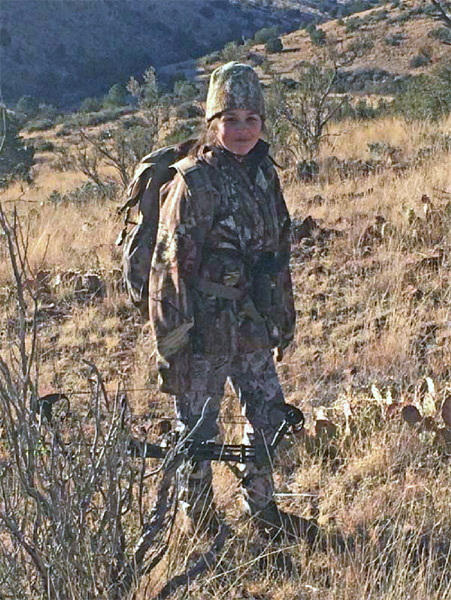 I knew from experience there were deer over the big ridge, just waiting for us. Not once has this spot failed me.

We began the trudge uphill, eventually topping out to where we could spy the surrounding terrain. Minutes later, I was pointing at a few does and eventually a buck…a fairly nice one, too.

We watched the deer disappear between two intersecting ridges, then we began our stalk. Thirty minutes later, we crested a little knoll, and I could see the buck and does in a flat spot. The situation would be difficult for a close shot for my daughter. At her urging, she said, “Try to get a shot, Dad,” knowing my effective range was a bit more than hers.

So, I nocked an arrow and snuck in a few yards closer to get the angle and distance right. Finally peeking over a big rock, I deployed the rangefinder and got a good reading. However, there was a slight branch protruding close to the vital area. I pondered and, ultimately, figured I could still make a good shot and thread the needle.

I came to full draw but the does caught the movement and boogied. The buck stayed put. However, just before I settled the pin, he moved off. There was no shot.

My daughter came to me all excited. “Why didn’t you shoot, Dad?”

“I couldn’t,” I told her. “I couldn’t get on him fast enough. It happens a lot…that’s bowhunting. You have to be patient. It’s all about taking a good shot or no shot. That’s what I want you to remember.”

After another big-buck sighting and many miles of boot leather shed, opening day finally came to a close. But it was a great day in the woods, and that cheeseburger, fries and shake never tasted so good, my daughter and I agreed.

The next day, I hunted with a friend, but in a different area not too far from the house. We hiked together at pre-dawn, then went our separate ways to cover different sections on the mountain.

By mid-morning, I had a bedded buck in view. With the wind in my face, and quiet footing underfoot, it was a quick advance as I “hooked around” the deer to ease in just above its position. I tiptoed to a knob and peeked downward. There, I caught the glimpse of big deer ears — does. From 20 yards, they saw me and ran off. That’s when the buck shot up from about 15 yards below. I quickly drew the bow and planted my 40-yard sight pin, but the deer was walking and headed for the trees. I knew a rushed shot would put the arrow too far back and into his flank and guts. I let down, knowing it was a no-go.

I moved on, sneaking and peeking the countryside for deer. Meanwhile, I glassed the lower country. I could see a number of hunters standing next to their trucks, glassing the higher slopes. I could see deer all around them, but a few hundred yards in the distance.

Eventually, two of the trucks took the winding road up the mountain, close to where I was standing. To my surprise, I could see the lead truck with the door open and a deer running out near the front of them. It appeared to be a spike, which is a legal antlered buck during the Arizona archery season.

Next, a lady jumped out of the truck with her bow and nocked an arrow, then shot at the deer — a seemingly long shot, too. I looked through my binoculars in absolute amazement and disgust.

The deer ran at the shot. They drove up hill again, to where the deer was standing, with both the passenger and driver door still open, and then they jumped out to retrieve the arrow and to examine it. I couldn’t believe it. It appeared to be a family of archers…man driving, lady in the front seat, and a teen boy in the back cab, holding his bow as well.

I tried to get the license plate to make a report, but I didn’t have any luck.

What a disappointment, I thought, and what a reminder to teach our newcomers about the ethics of the sport. “Road hunting” is an illegal method to harvest game and defies every rule in the book when it comes to fair chase and proper sportsmanship.

Real hunting means going eye to eye with your quarry…not using a vehicle to somehow make an advance, in order to easily “surprise” animals as they often get used to cars passing by and will stand and gawk while you take a shot next to the idling mechanism.

It’s not hunting. It doesn’t require any hunting skill or need for camouflage or quiet clothing or knowledge of wind direction and concern for human scent. It’s a shameful way of trying to waylay game. It’s cowardly, to be honest, and it’s certainly not the way our youngsters need to be educated, so they can pass it on to their kids, letting the cycle repeat itself over and over again.

It all comes back to the concept of fair chase, and why it’s so important to hold the hunt in the very highest regard. Performing illegal hunting acts not only hurts our hunting image, it also cheapens an individual’s participation in the sport — or ruins it, I should say.

Hunting, especially bowhunting, is supposed to be challenging. Failure is a common byproduct that leads to growth, refining of skill, and additional ambush and shooting opportunity. It’s actually what makes the sport so fundamentally special to begin with. Why skip that part altogether by finding an “easier way” of filling your tag?

But, when you follow the rules, and show respect for the animals and the environment in which you hunt, you gain more than you could ever know. Suddenly, your journey in the sport is lifted to new heights…more than any mixture of words can describe.

That’s the goal with fair chase…to make the hunt meaningful and ensure that the success is a whole lot sweeter.

Every animal, every shot, adds up to a lifetime of memories. It’s so much more than just a punched tag. We must never forget that.

After the day’s hunt, I came home and told my daughter about what I had saw. I told her I had changed my mind about just making every shot count. “There’s more to it than that, actually,” I said. “More than anything, it’s about how we hunt and how we set up the shot. That’s the most important part, I think.”

You’ve actually got to really hunt to experience fair chase, not just shoot in hopes of some quick blood shed. That’s the nature of it…to do it honestly, even when no one is watching.

The phrase “the more you put into something, the more you get out of it” seems to capture the essence of this mindset very well. It’s exactly what I want to tell my daughter, or any newcomer to the sport, to explain what the sport is all about.

This story was previously published in the January 2016 issue of the Ethical Bowhunter, the official E-Newsletter of the Pope and Young Club. To sign up for this free E-newsletter, please go to http://pope-young.org/comm/signup.asp

What’s in Your Turkey Vest?