My Secret to Success

by Brian R. Kightlinger
in Bowhunting Posts
0 0
A A
3 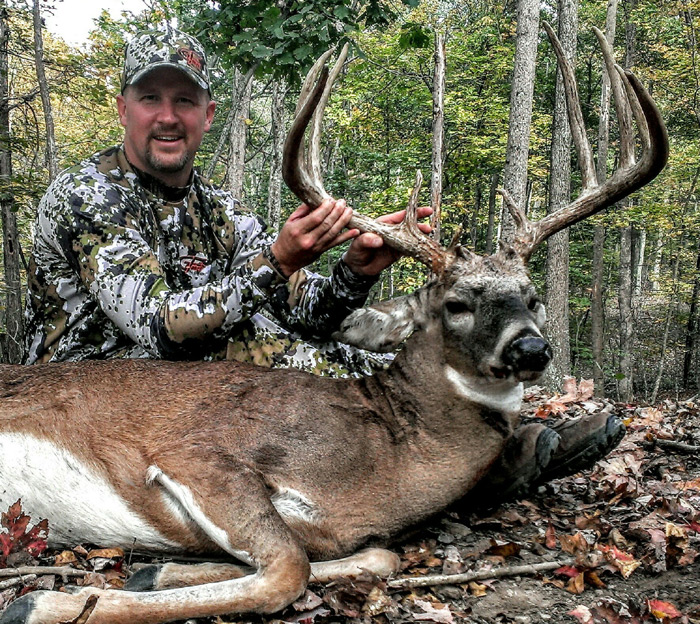 From an early age I was intrigued by whitetail deer. I started hunting at the age of 12, but never harvested a buck till I was 18. Mentors played an important part of my growth as a deer hunter. When I was 21, I bought my first compound bow and decided I wanted to hunt deer with archery equipment. That decision was a life altering event for me. Since that point, I have been consumed by whitetail deer!

Like most new archery hunters, there is a fire inside that consumes your every thought and your dreams at night. I read books about every aspect of hunting whitetails with a bow. Most of what I learned was from trial and error. Unfortunately, some of those mistakes cost me opportunities at nice buck. Over time, my methods improved and I was lucky enough to put my Pennsylvania tag on few bucks. In 2003, I harvested my first mature, 3.5 year old buck and from that point I was confident I could kill a mature buck each year!

Long story short, I was way wrong! I did not kill another mature buck until 2006 when I traveled west to Ohio. I killed another mature buck in Ohio in 2008, and then I had a cold streak. I could not understand why I couldn’t kill a mature buck in my home state of Pennsylvania. It wasn’t until a good friend, Steve Sorensen, introduced me to a game changing deer lure. Steve had written an article about Smokey’s Deer Lures and he recommended that I call Smokey and order some. That evening I called Smokey, talked with him and ordered some Pre-Orbital Gland Lure, Forehead Gland Lure, and Interdigital Gland Lure. I was skeptical at first, but figured I would give it a try during the 2011 deer season.

During our conversation, Smokey revealed  a system in which to make mock scrapes and use all three products. The idea behind the mock scrape was to introduce a new buck to the area. I had a spot in mind to create my first mock scrape. The area was where 5 main deer trails came together. I was careful to not leave any of my own scent around as I created the mock scrape. I hung my trail camera and left the area alone for about two weeks. I was anxious to see if the products would draw any nice bucks to the mock scrape. After two weeks, I couldn’t take it anymore and had to go retrieve my camera card.

My hopes were high as I plugged in the laptop and placed the card in the card reader. I opened the file and right away there was a nice wide, mature 8 point hitting the scrape. In fact, I looked at the time on the bottom of the picture and he had hit the scrape 45 minutes after I had made it. A few pictures later, there was another mature buck hitting the scrape. After going through the camera card, I had an inventory of 5 different mature bucks hitting the scrape. Now I had to figure out where to hang a stand so I could hunt the mock scrape! 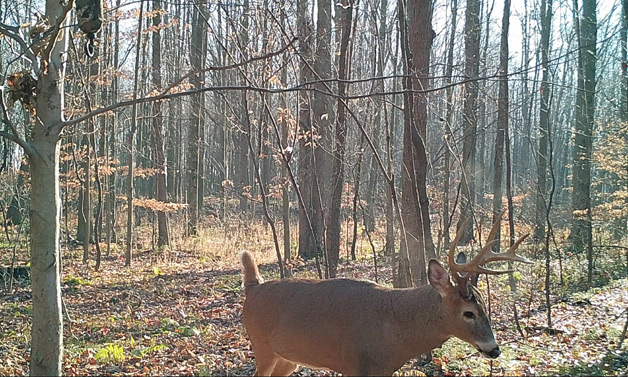 What I found most interesting about Smokey’s products is that every time I freshened the scrape, it seemed the deer hit it harder and longer. One particular 8 point was even hitting the scrape almost daily around 4:30. I found a nice ambush spot for a stand, and I watched the wind closely. On a Thursday, in early October, I snuck into that stand and waited to see if he would show to hit the scrape.

As I sat there waiting for the Big 8 to follow his pattern, the property owner fired up his chainsaw and began to cut trees. I figured the night would be a bust, but I was wrong! Around 4:40, I caught movement coming from my right. It was him! He was coming in to hit the scrape. I let him close the distance to 18 yards, get into the scrape, turn broadside and I took the shot. The deer was a 3.5 year old 8 point that dressed out at 195. 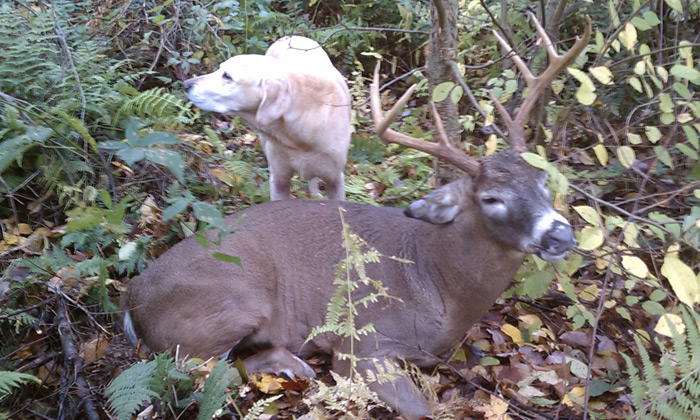 A few weeks later, I traveled to Ohio for a week long hunt. I tried the same strategy in Ohio and the result was similar. I harvested a great Ohio buck that dressed out at 210 and scored in the high 120’s! The bucks just seemed to wonder, “Who is this new guy on the block?” I was happy with the results after the first year, so I continued to use the product religiously. 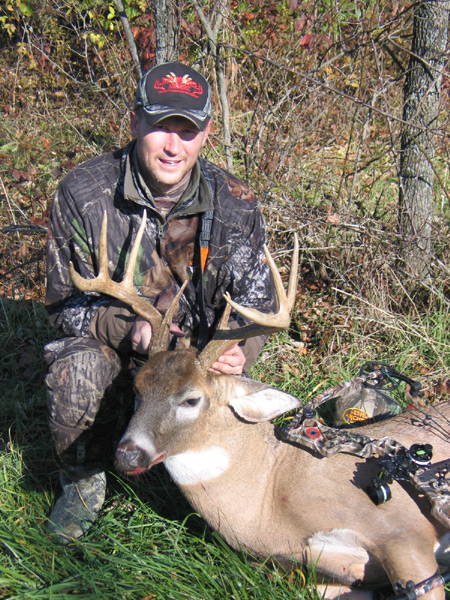 I was convinced that I had found a product that would help me continue to kill mature bucks. I began to doctor mock scrapes and kept running them year round. The does and the bucks would hit the scrapes throughout the year. I ran cameras all year round and was able to see the different deer living on the 100 acres I hunt.

In 2012, I enjoyed another successful year harvesting a nice mid 120’s 10 point during the Pennsylvania gun season. This buck fell victim to Smokey’s Doe in Heat and Rut n Bucks! He just couldn’t leave the drag line I used walking to my stand. 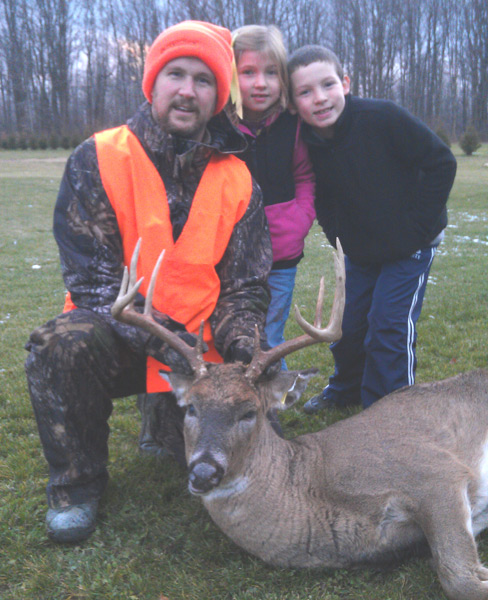 The buck I killed in 2013, began hitting the mock scrape religiously in October. My time was limited due to my children’s sports schedule, but I kept close tabs on him until the last week of the PA archery season. I watched him hit the mock scrape then tend a doe nearby. He chased away 5 other younger bucks trying to move in on his date. Each of the 5 younger bucks hit the scrape too. He fell victim to a well-placed Black Eagle Rampage arrow. 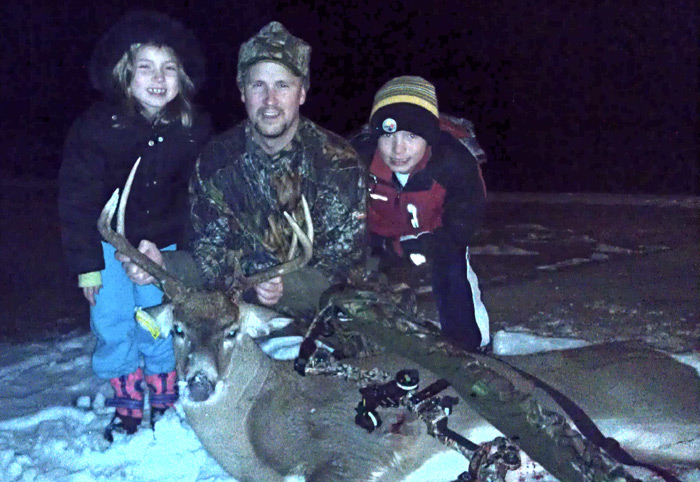 During the 2014 season, I did not hunt much as I was trying to get my 10 year old son his first buck with his compound. I had some great trail camera pictures of bucks hitting the mock scrapes. I spent a lot of time running the camera and helping my son learn the ways of an archer. He enjoyed working with me on keeping the mock scrapes fresh and looking at the trail camera pictures. He even had names for most of the bucks. He ended up killing a nice 1.5 year old 6 point as it was coming to the mock scrape. It was awesome how Smokey’s Scents brought this deer to 12 yards, so my son could arrow him! 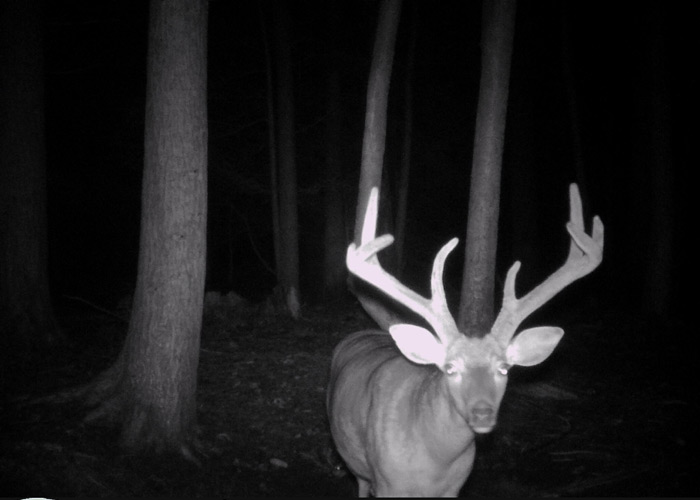 Just this past fall, during the 2015 PA Archery season, two 3.5 year old bucks began hitting my mock scrape in early October. One was a big, wide 7 point, and the other was a tall tined 8 point. I was after the Big 8 and utilized all of Smokey’s Scents to help me harvest him. I had trail camera pictures and videos of him hitting the scrape every few days. On the last day of the archery season, after I had just freshened the mock scrape, I killed him at 18 yards. He is my largest Pennsylvania buck to date. He scored 125 2/8 inches and dressed out at 198 pounds. 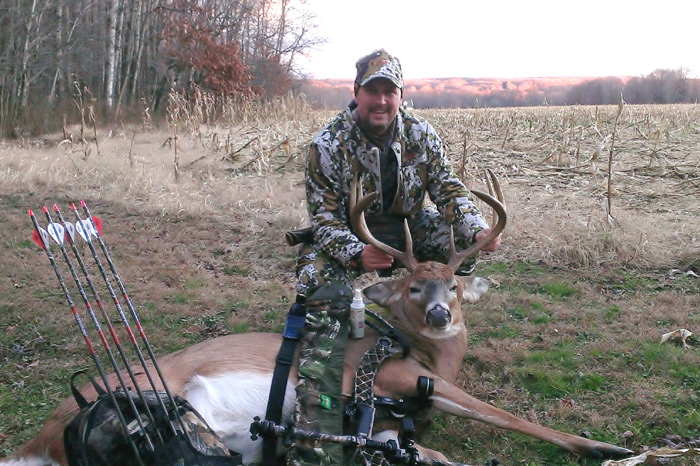 I am anxious about the fall of 2016. I have seen the nice 7 point that was one of my target bucks from last year. This year he will be 4.5 years old. I have his shed from 2014 and I was already lucky enough to find one of his 2015 sheds. I am excited to use Smokey’s Deer Lures on this buck again this year. I am hoping to arrow him come October! Here is a picture of him from the fall of 2015!

The Author was the first person to harvest an animal with the new Black Eagle Carnivore Arrows. Watch Video Here:

I have used many different products in the past to attract mature bucks, but none have had the results that Smokey’s Deer Lures have had. Smokey is knowledgeable about his products, and the countless hunters with their personal results speaks volumes! If you are looking for that game changer, or Ace in the Hole, check out www.smokeysdeerlures.com. You will not be sorry that you did. As I am finishing this article, I have already been out to visit my mock scrapes and cameras to see what deer I will be pursuing this fall! The season will be here before you know it. You better get started or you will be behind! Smokey’s Deer Lures can be the difference maker in your season!