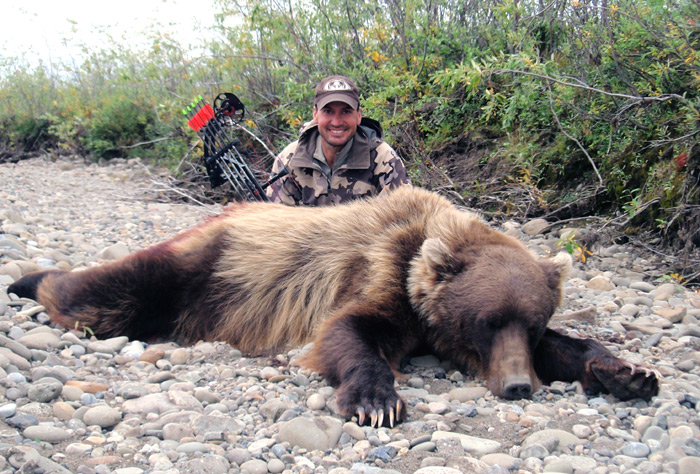 Frank Noska of Wasilla, Alaska, is an extreme bowhunter. Over the years he has developed a hunting technique that defies reason. Today, he hunts Alaskan brown bears and grizzlies without a backup handgun or another hunter with a rifle. “I’m often asked why I hunt bears without a backup hunter or carrying a gun,” Noska says. “When I’m stalking bears, I don’t carry a backpack and usually don’t wear boots. I stalk bears in my socks, so I can move really quietly. I’ve found carrying a pistol with me on a stalk encumbers me. Not carrying a gun and not having a backup hunter with me may not be the smartest thing I’ve ever done, but when I can find a bear in a spot where his attention is focused on something else, if I take my time and move slowly, I usually can get within bow range.”  Noska hunts some of the most-dangerous bears in the world, Alaskan brown bears and grizzlies that have the ability to travel 40 miles per hour (the length of 10 football fields in one minute). Why does Noska bowhunt these bears solo? What’s being within 30 yards of an animal that can kill you if he sees you and you have no place to run or hide, like? How does Noska have the courage to remain motionless when an 800-pound grizzly bear is looking straight at him?

“I took a brown bear in the fall of 2009, with my PSE original X-Force bow. I was hunting on the Alaskan Peninsula, where I didn’t have to draw a tag. I didn’t take my own plane on that hunt but instead flew-in a commercial bush plane to the hunting area; the pilot dropped me off at camp. I was supposed to have a backup hunter with me, but at the last minute, my backup hunter couldn’t go. I didn’t want to cancel the hunt, so I went by myself. I normally do a lot of hunting by myself, because then I don’t have to depend on anyone else. I knew this area homed numbers of bears, and I’d seen several of them from the air before I was dropped-off into my hunting area. When I arrived at camp, I set-up and the next morning, hiked-up to a high mountain. I watched the wildlife, including the bears, to see how and where they were moving and bedding. I wanted to locate the biggest bear possible. That first day, I saw about six bears. I realized that getting to the place where I wanted to hunt would require some time. I decided my best chance to take the biggest bear would come in the afternoon. The next day, I went to the site where I planned to ambush the bear and waited. Bears feed all night and then go to bed in thick cover. They don’t come back out until just before dark.

As nighttime approached, I was hoping to get a shot at the bear before dark arrived. When I saw the bear beginning to move-down the mountain, I positioned myself in a region where I thought he would come, near some grass. The bear came down to within 20 yards of me and offered a broadside shot. I came to full draw while in tall grass and totally out of sight of the bear. I eased-up over the top of the grass and aimed and released the arrow. The bear took the broadhead right behind the shoulder and went down within 5 feet of where the arrow had hit him. I was amazed, since most bears, no matter where they’re hit, will run 50- to 100-yards from the region where they’ve been hit.

Since the bear was only 20-yards from me, I used my binoculars to watch, until he completely expired within a few minutes. Because darkness was falling, I barely had enough time to go and look at the bear before heading back to camp, 500-yards away. Early the next morning, I took some pictures and then started skinning the bear and hauling him back to camp. This 9-foot-tall brown bear weighed about 850 pounds. The skull measurement on this bear was 24-3/ 16-inches. My original PSE X-Force had done its job in what I considered was a spectacular way,” said Noska. 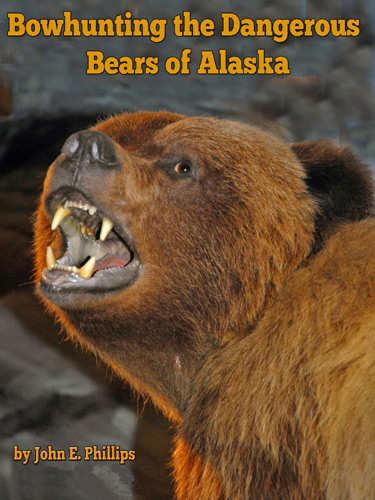