My wife Jennifer has wanted to harvest a buck for many years, but for whatever reason (namely her bad luck) she has not had the chance. She’s a full-time teacher and mother of three. Yes, I’m counting myself as I’m pretty much lost without her. She finds my keys, my wallet, and a lot of times the kids after I have been watching them.

As the hunting season approached, Jennifer had a different mind set. This would not be the year of bad luck or missed opportunity. She had always hunted with a Muzzleloader or rifle, but this year I picked up a Tenpoint crossbow that would extend her season and enable her to experience the “RUT.”

Jennifer and I sat many different occasions together and several times we took our three year old son Platt with us if we hunted from a blind. She was determined to get a buck, but not just any, she wanted a solid one. Heck she even passed on deer. I’m not sure when she became a trophy hunter, but several times she had decent deer out front and would not even consider them. 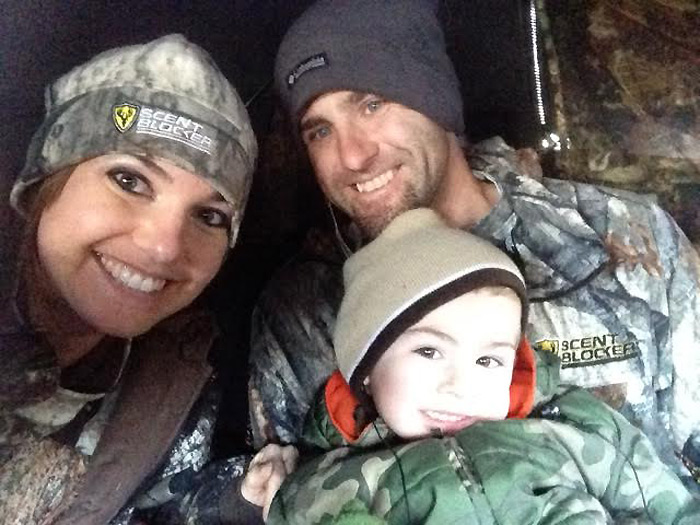 It was a very cold November evening when we tracked out as a family of three, leaving our nine-month-old with the grandparents, to a blind that I had set up and even took my deer out of the week before to see if we could finally get a deer for Jennifer.

She was starting to get very frustrated about not getting the right deer in front of her. The previous two evenings she’d sat alone and only seen one deer. On this day, as we settled in and got Platt comfortably warm and armed with snacks and a toy, we didn’t have to wait long for action to surround us. The deer poured in, enamoring Platt as he sat quietly watching as they passed by at a mere five yards from us.

Then it happened: a “Shooter” approached. He was a big 8 that I had named Tex after seeing him on my camera. He was walking down the alley right into range.  Jennifer got settled in for a shot and then every deer in the county showed up to block her from firing.  One deer would move, then Tex would turn. We had five bucks in front of us, shielding and protecting Tex. Five minutes into his appearance Jennifer was about to have a stroke, so impatiently eager she was to take her shot. Finally it was clear and Tex was broadside.

The bolt flew! I heard the smack and saw it had hit right beside the shoulder.  Tex darted out of the alleyway and into the field beyond our visibility. I jumped out the front window and cut to the field where I could see he was more than 100 yards away. He tucked his tail and ducked back into the timber.  I had a mark.

I walked back to the blind beyond excited. I could hear Jennifer and Platt in the blind exclaiming, “We got him! We got him!”  The sight of my wife and my son standing face-to-face and holding hands in shared excitement brought an enjoyment to the moment I’ll never forget.

I hurriedly gathered the stuff from the blind and we went back to the truck.  Jennifer then started to question the shot. I told her it was in the ringer, but we needed to give him time.  We drove back home and waited, waited, and waited.  Once we got the kids down to bed, my dad came over to babysit and Jennifer and I left to find her deer.

Four hours had passed since she’d released the bolt.  My insides were tearing me apart. I wanted to find this deer so bad but I did not want to show Jennifer I had any doubt.

As we drove to the mark I had from earlier on the four-wheeler, I grew concerned that I couldn’t pick up any blood. I had seen the hit, but sometimes your eyes or bolt can do funny things.  I told Jennifer that we were not going to look very long unless we found blood as I could always go back to where she shot him in the morning and there was no reason to go on a wild goose chase.  She didn’t want to turn back so we agreed to dive into the timber for just a couple minutes.  I told her with the shot she had put on him I would be surprised if he could have made it over the creek so we would check there.

Approaching the creek, not five minutes into the timber, there it was: “WHITE BELLY!” I went ahead and acted like a fool, jumping up and down hugging my wife.  We hustled over to Tex and Jennifer got to lay her hands on her first buck.

“All the mounts can now go upstairs! I want everyone to see my buck!” she proudly asserted.

When we returned home, Platt was awake, unable to sleep in his anticipation of seeing mommy come home with her “big buck!” We celebrated her prize shot and are still relishing in her moment of accomplishment.