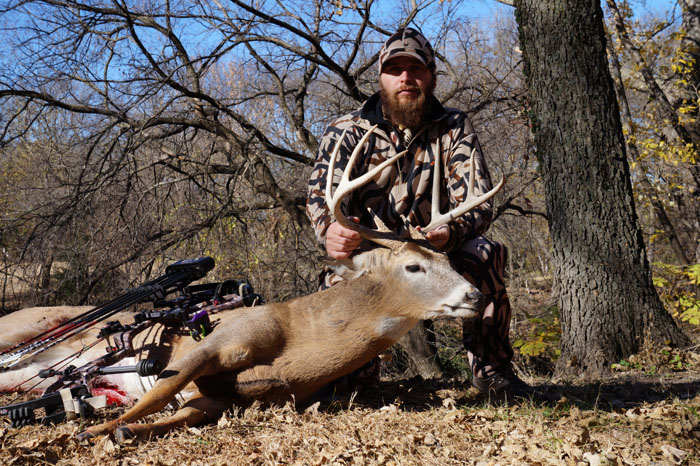 It is November; the air is cool and crisp. I sit in my perch shrouded in  the early morning darkness. There is a rustle in the leaves behind me. As I turn to look for the source, straining my eyes in an attempt to find movement in the black, I hear it. Grunt, grunt and then an explosion of chaos, as he runs under my stand after the doe, I can barely make out it’s him.

Yep, hard to mistake that massive white rack even in the predawn darkness. I sit back and attempt to quiet my nerves, hoping that he hangs around till daybreak. It has been six weeks since I first laid eyes on him and not a day has gone by that he hasn’t crossed my mind. My Browning trail camera had captured many pictures and videos of him over that time. He was consuming my dreams both day and night; I could already see him on my wall.

Daybreak comes and with it brought the type of action every whitetail hunter lives for, multiple nice bucks chasing a doe in a frenzy that only the rut can provide. Tongues out, steam rolling from their nostrils, hair raised and legs stiff as they chase and posture. Who will win the prize as the bucks square off?

I can see him, he has no doubt as to whom the victor will be. It is clear he doesn’t even feel the need to deal with the other two bucks. They are nothing more than an aggravation.  I try to regain my wits as I reach for my rattling antlers that are hanging next to me. I bring them together.  Lightly at first… but no response. Next time I smash and grind them together with everything I have as I grunt and snort wheeze giving every effort to get his attention and bring him my way.

The excitement is nearly unbearable when all the bucks freeze and hone in on my location, trying to locate the source of their disruption. Yes, it is working, I thought, this is going to happen! Then the doe seizes her opportunity with the bucks distracted and heads in the opposite direction, taking Mr. Big right along with her. I watch as they both clear the fence and head on to the neighbor’s property. Not what I was hoping to happen.

But it isn’t over yet as the other two are making their move, heading directly my way and fast. I grab my bow and ready my camera. One is going to pop out at 15 yards and offer me a perfect opportunity. Nope, a quick last minute decision on his part has me scrambling to reposition both myself and camera as he skirts downwind to assess the situation from a safe locale.

My heart rate increased as he steps out of the draw.  I focus the camera on him as he begins to pass my stand. Bristled up and stiff legged, nose to the air, one last check on the camera and I come to full draw, settle the pin and squeeze. ‘Thwack’, man I love that sound, music to a bowhunter’s ears. I watch as he disappears behind a group of trees just up the draw. A second look reveals what appears to be an antler sticking up thru the tall grass just past said trees. Bringing my binoculars to my eyes this is easily confirmed, he is down.

I carefully sit down and try to regain my composure. Man, what a morning!  Still seated I pull out my phone and attempt to make my shaking hands punch the right buttons so I can send my buddy a text. “Buck down, come help”. Taking a deep breath I sit back and replay the morning’s events in my mind. I think back to years gone by and make an effort to recall if I had ever had an experience quite like the one I had just witnessed.

It takes no time at all to locate my Black Eagle Carnivore, it is painted red from tip to tail.  I return it to my quiver to work another day as I walk up to my big 8 point. It is impossible to contain the broad smile as I look at this magnificent buck. He isn’t anywhere close to my biggest buck but he is right up there in greatest experiences. A good reminder to myself about why I am really out here… For the hunt!