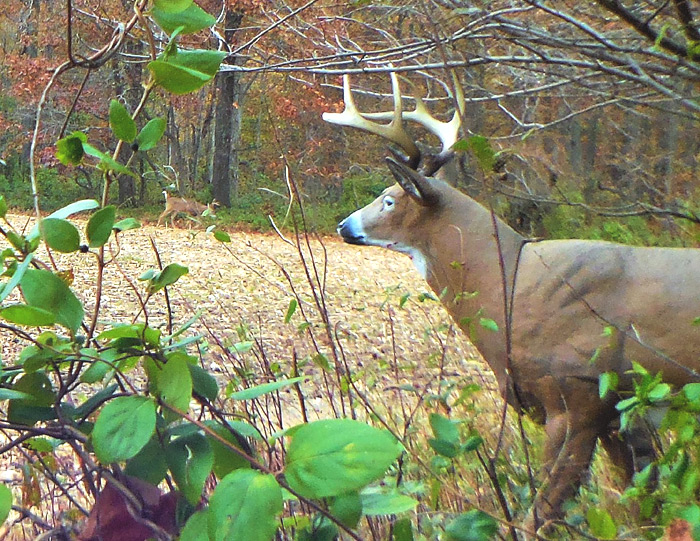 DURING THE RUT a decoy can pull bucks within good bow range. Such encounters can create close-range opportunities for hunters capable of self-control.

I STILL DON’T KNOW where he came from. One minute the tree line off to the right of my stand stood empty; however, the next time I glanced across the picked cornfield beyond my whitetail decoy, I saw a gnarly-antlered stud buck thrashing an overhanging limb above a hot scrape maybe 65 yards away. My heart leapt at the sight of his oversized antlers.

It was the second week of November, already cold and ideal for prime time for rutting action. I’d already passed up gimme shots at several decent bucks. Each was lured within good bow range by rattling/grunting sequences and the buck decoy interloper standing 25 yards from my tree. I’d yet to be tempted to shoot, but one look at this latecomer made me want to reach for my bow.

Instead, I felt for the grunt tube dangling from its lanyard around my neck. When I grunted loudly, he turned his head and looked my way. Then, after pawing at the scrape and urinating on his hocks, he bristled up and stalked stiff-legged along the edge of the woods. The buck finally disappeared behind a tangle of hardwood limbs and frost-curled leaves that obscured my view. I knew he’d either keep walking or turn to challenge my decoy.

One minute. Two. Three and more. Absolutely no sound or movement. Where the heck had he gone?

I grunted again. Softly. Seconds later a flash of moving gray snagged my eye. The big buck was 15 yards beyond the decoy, still hugging the woods’ edge near my stand and swaggering closer. I eased my bow off its hook without taking my eyes from the deer, watching him stop to lick his nose and paw the frozen field. His breath left wispy ghosts floating in the morning air. An unseen giant hand gripped my chest with steel fingers, squeezing the air from my lungs. A ragged heartbeat hammered inside my head.

As he stepped closer to the decoy and into view, I began to draw. Wait-stiffened muscles didn’t cooperate. I struggled to reach the anchor point at the corner of my mouth. The buck was broadside now, under 35 yards. My bow arm trembled, the sight pin bobbing on his side. My mind was screaming “Shoot!” So I did.

My arrow zipped under his chest an instant before he spun and flagged away. I wanted to cry. More than 50 years of bowhunting experience, yet target panic had once again reared its ugly head!

TARGET PANIC, THAT UNWELCOME BANE OF BOWHUNTERS, strikes most everyone from time to time, whether it’s caused by paper, foam, or hair. My latest case cost me a handsome whitetail, and with analysis it wasn’t difficult to understand why it occurred. Mix together my bow’s heavy draw weight, cold temps, and the excitement of having a shooter whitetail so close, and I recognized the recipe for a perfect TP meltdown.

So what to do if and when it happens to you?

First, choose and shoot a hunting bow that you can draw smoothly and hold easily under all conditions (including cold weather), whether standing, kneeling, or sitting. If you can’t and risk a hernia to pull to or hold at full draw, your bow’s draw weight can be problematic at the worst possible times. Growing older and losing muscle tone, I’ve gone to lighter-pulling stickbows and compounds, with excellent results. Reducing draw weight lessens the chance of tension-induced target panic at the moment of truth, and the kinetic energy of modern bows makes up for trimming poundage.

Second, understand than drawing an arrow on the practice range and drilling the sweet spot of a GlenDel buck is different than drawing on a flesh and blood buck standing near your tree or blind. That’s especially true if you’re cold, tired, or feeling the pressure of making a killing shot. Thankfully, I still feel nerve-tingling excitement after half a century-plus of bowhunting. I pray I’ll never lose it, since it’s an integral part of the sport that makes it so special. But any tension we feel must be controlled.

Third, keep in mind that a bow sight can help reduce target panic. Even the legendary Fred Bear, who shot instinctively, urged beginners to start with bow sights to learn to shoot accurately faster. Concentrating on a single pin forces you to focus on seeing something besides the animal you’re aiming at. That helps reduce the psychological pressure. While I shoot longbows and recurves instinctively, and can quickly hone my shooting skills with regular practice, I do use sights on my cam bows and am ready to go hunting after a few practice shots prove my sights haven’t moved since my last hunt. My serious practice consists on shooting a single arrow from various yardages and different body positions. I don’t shoot for groups; I shoot to kill with the first arrow released from various yardages.

Fourth, “shoot blind” to help concentrate on making the perfect release shot after shot. Stand within a few feet of a target bale or backstop. Draw and close your eyes. Don’t even think about aiming. Simply focus on making sure your form and release are flawless. Get the feel of pulling, holding, and releasing an arrow, then carry the same feeling into practice sessions when your eyes are wide open and distances to the target have increased.

Fifth, consider using a back tension release. Time was I shot compound bows with my fingers and a shooting glove, exactly as I do with all stickbows. Now, today’s shorter axle-to-axle mechanical bows make using a release mandatory. Punching and jerking trigger-style releases are the biggest target panic problems with these popular models. Arrows launched with your thumb or little finger require discipline and concentration, helping prevent panic and “rushing the shot.”

FOR THE RECORD, a few days after blowing the shot mentioned earlier, I drew, aimed, held, and released an arrow at another record book candidate standing broadside at 25 yards. That stud buck made it maybe 40 yards before I saw him stagger and go down. Isn’t it amazing what happens when you don’t let pressure play games with your mind?

All photos by M. R. James

Some Deerhunters Fail Year After Year: Why?