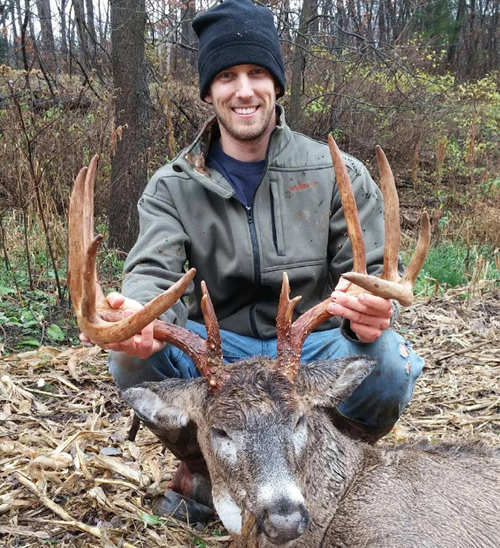 Michael Hodel of Wisconsin has won the Hoyt Nitrum bow offered as an incentive for joining the Pope and Young Club during 2016. The membership drive began at the 2016 ATA show in Kentucky and ran through the final day of the Bowhunters Rendezvous held in Wisconsin June 10-12. Any
new member joining during this time period received an entry into the drawing for the Hoyt Nitrum, named 2015 Outdoor Life’s Bow Of The Year.

“We’d like to congratulate Michael for winning the Hoyt bow and thank him, and all the new Pope and Young Club members, for joining us in our efforts to protect and defend bowhunting and our
bowhunting heritage,” says Rick Mowery, Communications and Marketing Manager for the Pope and Young Club. “We’d also like to thank Hoyt for their generous donation of the Hoyt Nitrum bow. Without support from companies like Hoyt Archery, we would not be able to offer these fantastic incentives which help to strengthen our membership.”
“I was shocked when they told me and honestly, I still am,” said Michael. “I thought it was very generous of Pope and Young and Hoyt to make this happen for a new member.” Michael went on to say, “growing up I was taught by my family the importance of being an ethical bow hunter. As a member of the Pope and Young Club I can help ensure that future generations understand the importance of preserving ethical, fair chase bowhunting. I am proud to be a member of such an amazing organization. Thank you Pope and Young Club for all that you do for bowhunting.”
The Pope and Young Club is a non-profit North American conservation and bowhunting organization
dedicated to the promotion and protection of our bowhunting heritage, hunting ethics and wildlife
conservation. The Club also maintains the universally recognized repository for the records and
statistics on North American big game animals harvested with a bow and arrow.
Contact the Pope & Young Club office at: www.pope-young.org or P.O. Box 548, Chatfield, MN 55923, Ph: 507.867.4144