by Rob Schneider
in Bowhunting Posts
0 0
A A
0 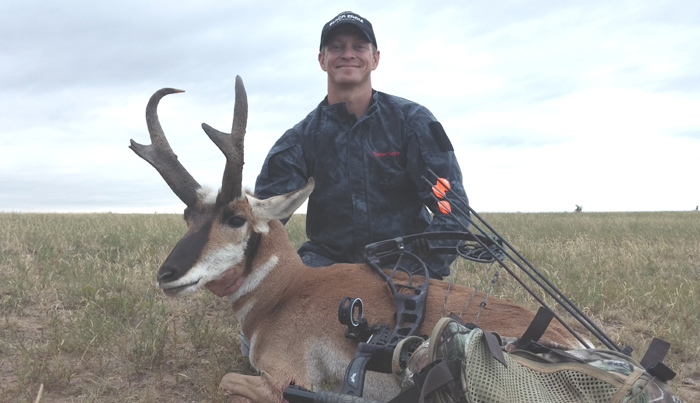 Author with his hard hunted pronghorn.

August 2013 I found myself working a hunting show in Ft. Worth, TX.  Brett was one of the guys I was working with who I knew off of an internet forum but this was our first meeting in person.  We instantly hit it off and had a great time.  When loading up after the show, he said he was headed straight to Colorado to do some antelope hunting.  Intrigued I asked him where in Colorado and if there were lots of speed goats.  He said he always had several people come up and hunt and the success rate was high.  This is when pronghorn hunting really caught my attention.  Early 2014 I applied as I usually did for elk in New Mexico, and when the results were released the typical disappointment of not drawing a tag hit me again.  I was itching to get out west, so I called Brett and asked if there were any open spots to hunt antelope.  He said he was wide open and for me to try to find another hunter if I could. I called my buddy Oscar and he was instantly willing.

Well as the season got closer it was looking like it was going to be wet there meaning lots of water holes and hard hunting.  Opening day Oscar scored on a nice P&Y antelope when a bigger one chased his so much it got thirsty and came in for a drink at 52 yards. Bad move on his part and an arrow put him down. I was seeing antelope but no shooters at my water hole.  I kept seeing the speed goats about 400 yds away in the valley and all day long too.

Brett got his horses and said, “Let’s try the horseback method!”  I was excited as I had read about this before.  Four different times in the last two days of my hunt I got within 60 yds and all four resulted in a miss.  But after the first two misses I realized my sight had been knocked off. So I put on my old sight and re-sighted my bow. The last two times I missed was on a bruiser of a buck and both times he saw the arrow coming and moved out of the way.  I knew pronghorns had incredible eyesight but I didn’t realize how fast they could move to avoid an arrow.

So I left Colorado and came back to Texas since I had to work.  Brett told me since I paid I could come back before the season ended.  While back at work on my next five day shift, it was eating at me that I blew so many opportunities.  I had one last vacation day so I took off the last day of the set and drove from 1 am to 2 pm straight through to a local city’s campground and set up my camp.  I called Brett and told him I was back to hunt. He told me it looked like the antelope were starting to rut and for me to be ready because you never knew how a buck would react to you in their territory. It had also rained.

I went out to the ranch and was going to go check the blue trough where the antelope seemed to hang out on my previous trip.  As I was driving in, just before the water hole I sat the first trip, I noticed a large group of does about 140-150 yards out.  I glassed them and didn’t see any of the young bucks that were in that group before.  Then the bruiser buck appeared almost from nowhere.  I put my truck in park, got my bow out of the case, grabbed my release, range finder and one arrow.  I eased toward them knowing all eyes were on me.  As I got to 60-70 yds, the does huddled around the buck providing no shot as he made a mock scrape telling me this was his territory.  All of a sudden a fawn came bounding in startling the does making them break their huddle around the buck.  He stepped out and I ranged him twice at 61 yds.  I pulled back my Obsession Evolution, and aimed just in front of his chest cause I knew he would run upon release.  Settled in, I sent the Black Eagle Deep Impact arrow on its way.  He instantly darted forward and I saw dust kick up behind him as he ran away.  My first thought was, ‘No way I missed that shot…..or did I?’ He then rounded to the right and I could see the hole in his side.  A little far back but it looked like a good hit.

I watched him crest the hill and go into the neighboring valley.  I knew I had to wait and it was going to be hard and agonizing.  I called Brett, told him where my shot was and he said to give him time that they can’t take a hit like that.  A long hour later I was glassing from where I last saw him.  I saw nothing and my heart started to sink.  Then I did a 180 and saw him lying near the other crest but still alive. I watched from 140 yards out for 30 minutes as his head was bobbling. The buck, with all his strength, got up and walked toward the cedars.  He never made them. A release of emotion flowed through me as I thanked the Lord for blessing me with this opportunity. Grossing 82″ he will be hard to beat!

God's Plan For Us!