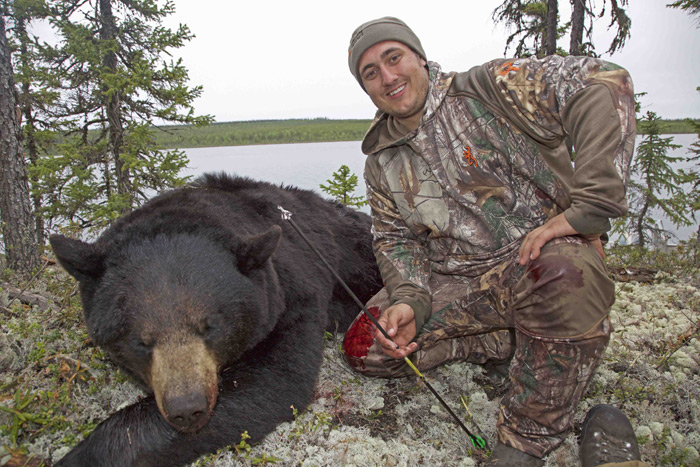 Jared Sommers with a 20 9/16" bear taken with Bear Pro Safaris the week that Clay was hunting in Saskatchewan.

The classic stoic beauty of the Northern boreal forest encompassing the higher latitudes of North America is hard to describe. A thick cloud of intangible mystery surrounds the wilderness landscape that smells of pungent muskeg and the tart fragrance of spring-growth pine. I think it’s the absence of any evidence of man and the innocent curiosity of the wildlife that makes the place different. Thick lichen covered forest floors, emerald blue lakes, huge boulders, and skinny Jack Pine’s dominate the landscape and have for the last 10,000 years. In my hunting escapades, I don’t think I’ve been to a place more absent of human intrusion. The true wilderness of northern Canada is awesome, in the truest meaning of the adjective. Additional to the deep things that stir in the heart of man while he visits wild places, we had a great bear hunt.

In the middle of June, near the summer solstice, it really never gets dark this far north, adding to the intrigue of this place. The sun merely dips slightly below the horizon for a few hours, but its light still illuminates the landscape, though dulled. For seven days last week, myself along with four other comrades from Arkansas hunted in northern Saskatchewan with Kolby Morrison of Bear Pro Safaris. We had an amazing experience. And I want to emphasize that word – experience. I’ve never really had a feeling quite like this after a hunt, but just bowhunting here was enough to make the trip worth it. I’ve never been to a place where the atmosphere and adventure overshadowed the great hunting.

We had a tremendous group of guys in camp. Four of which were dear friends of mine.  James Lawrence, Ryan Greb, Carney Easter and Brent Reaves made this week special. Add to this lineup a hospitable, knowledgeable, and ambitious outfitter like Kolby Morrison and we had something special. We also met a group of guys from Indiana that shared camp with us – Tom, Steve and Jared. Jared killed the biggest bear and caught the biggest pike, making the constant grin on his face almost unbearable (joke). Aside from that, these guys were a great addition to our week.

We accessed our camp by boat, ate home cooked meals like kings, experienced unthinkable fishing, and great hunting.  I won’t be able to go into all the details until the Nov/Dec or Jan/Feb issue of Bear Hunting Magazine. I will say that I killed a Pope and Young class boar on the first day of the hunt with my Mathews Halon (green scored 18 4/16”). Though I misjudged him significantly, I was still very pleased. Carney Easter killed a bear that I green scored at 20 4/16” and Jared killed a giant that scored 20 9/16” bear. Considering the weather was funky and it was a full moon, we had a great week. You’ll be able to watch some of these hunts on the 2016 episodes of our show on Carbon TV, Bear Horizon. Look for more info on this in future blogs and expect the first episode in early August at www.bear-hunting.com.

I want to touch on a subject while it’s still fresh in my mind – traveling in Canada. The four guys that I traveled with had never flown into Canada and had many questions. Here are the high points in my opinion:

–       Airlines allow you one large carry-on item and a smaller item. The larger being like a medium-sized backpack.  The second being the size of a camera bag or a woman’s purse. These you can cram full of stuff because they aren’t weighed by the airline. Pack your essentials in your carry ons – personal items, medicines, a change of clothes, personal identification and money, cameras and computers.

–       You will be charged around $50-$75 for checked bags (items that go underneath the airplane). You can typically check up to two bags at this cost. Once you start checking three and four bags the price goes up significantly. It’s critical that all the checked bags stay under 50 pounds. Your bow/gun case and a large duffle bag is usually all you’ll need to check.

–       What to do with a bear on the way home? Get it frozen or salted, buy a cooler or storage tub and check it with the airline. It cost me $164 to check my bear hide and get it home. It was my third checked bag (bummer). This was, however, a small price to pay for getting it home.

–       On average expect to spend about 25% of your total cost in traveling expenses to Canada. We paid $550 for round trip airline tickets from Arkansas to Saskatoon. We had to rent a large SUV for one week ($800) and pay for fuel ($200). We split the car rental between four people. We ended up staying one night in motel. Overall, I personally spent about $800-$900 in travel.

–       Will my bear spoil on the way home? A hide that is frozen solid will last well over 24 hours, and probably closer to 48 hours. We bought Rubbermaid totes at Walmart in Saskatoon and put our bear hides and skulls in each tote. We packed some dirty clothes around the hide for insulation and called it good. My tote with a 250-pound-type bear hide/skull weighed 47 pounds. Carney’s BIG bear’s skull and hide weighed 67 pounds.

–       Cram your bow or gun case full of stuff! As long as it’s less than 50 pounds you won’t be charged extra. Additionally, when my bow case was checked by the TSA in Canada (not all are, but mine was) I believe the crammed-full case discouraged the officer from pilfering too much. Not that I had anything to hide, but she simply opened up it up and quickly closed it.

–       When I go to Canada I carry my camera case and medium-sized backpack as my carry on. I carry one large Cabela’s duffle bag with all my gear. And I carry my bow or gun case. I carry on two items and check two items. You should be able to fit all you need in these.

–       Pack some clothing in your rubber boots to save space. Utilize the full capacity of your carry on’s because they aren’t weighed by the airline. Utilize multiple 1-gallon zip lock bags to store the smaller items (hunting knife, deet, phone chargers, passports and wallet, tools for working on bow or gun, etc.)

–       Don’t stress about what you forgot. As long as you’ve got your passport, money, hunting license and tags, and your weapon you’ll be fine.