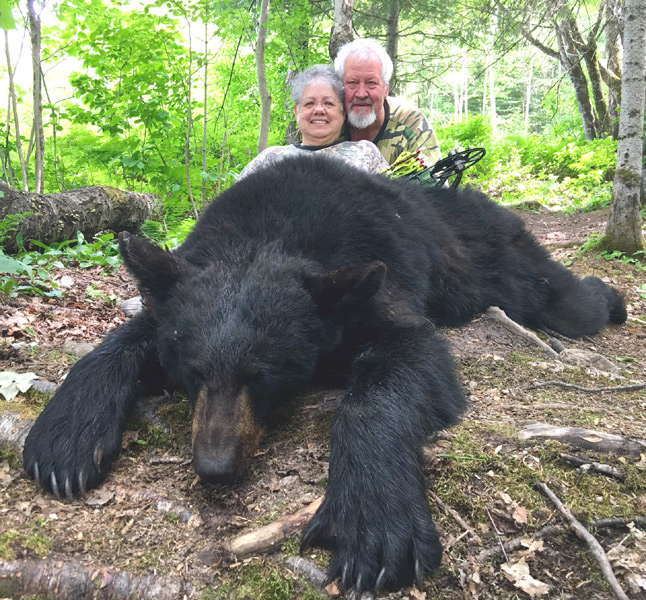 June is a special time for our family.  My wife and I celebrate our wedding anniversary and so do my parents.  My parents also celebrate mom’s birthday in June.  They typically spend two weeks in bear camp each year to celebrate their anniversary and birthday.

My mother has been bowhunting with my father for most of their 54 year marriage. She’s a good hunter and started out with a Bear recurve.  She once took a button buck with her recurve at 30 yards on a full run, a buck my father had missed.  We all enjoy teasing Pop over that one.

Recently she was at Danny Dyer’s bear hunting camp in New Brunswick, Canada.  My father has been bowhunting bear every spring at Dyer’s since 1997.  My parents have been joined in camp by many folks over the years including Ted Nugent, Michael Waddell and the Bone Collector crew and many others.  Chuck Adams has also been in camp a few times over the years. This camp has had many trophy bears taken, Pop’s 1997 bear being one of the largest.

Dyer’s family runs a nice camp.  He has a large area and the camp is clean and family friendly.  I hear the cookies are also delicious.

Last year would have been the year for mom to get her 20th bear.  Mom had taken 19 bear and  she saw several bear but none that she wanted to shoot.  So it wasn’t in the cards in 2015.  She returned home empty handed.

My parents own and operate a retail archery business, Addington’s Bowhunter Shop in Winfield, West Virginia.  They have been in business since 1978.   The custom built archery shop features displays including several life sized mounts from my parent’s hunting adventures.

We were all anxious to see mom get #20.  We hoped 2016 would be the year it happened. She was in high spirits and we all anxiously awaited news from camp.

Midway through the hunt I got an alarming text from Ted Nugent.  He said he loved my parents like they were his and had insisted my dad go get medical attention.  The text scared me and I began to call medical facilities in the area to find out what was going on.  Luckily I found the ER he had been taken to and they said he had been discharged.  So finally I was able to track my parents down and found out Pop was OK.  He would return to camp and hunt.

The next bit of bad news I received was that my mom’s sister passed away suddenly in the night. That was the toughest phone call I ever had to make.  Mom took the news pretty hard.   I hated to call camp with this news but knew she would want the news because she was very close to her sister.

The week wasn’t all bad though.  One evening Ted Nugent played some music in camp and when he did the song “Fred Bear” there wasn’t a dry eye in the room.  Mom said you could really feel Fred’s spirit in camp when Nugent sang his song.

The evening before we got the news about my aunt mom hunted in a ground blind.  She saw what she deemed to be a good sized  bear.  She waited for the right opportunity and when it presented itself she made the shot.  Her arrow flew true and did a complete pass thru traveling about 15′ after striking the bear.  She got both lungs so the bear didn’t go far.  She was all smiles that evening back at camp.

All the previous hunts were on her mind.  She thought about all the friends from those bear camps, all the memories and all the evenings she had sat patiently waiting for the right bear.   Over the years she had hunted as hard as any man, harder than most in a variety of places.  All her bears were taken with a bow and most had not traveled far after the shot.

The next day the atmosphere at the Dyer camp was happy because Cathy had done it!  Pop, guide Danny Dyer and Ted Nugent all posed for photos with Cathy and #20.   She was smiling ear to ear.   Unfortunately Pop didn’t bag a bear this year but we are all happy he was well enough to keep hunting after he received medical attention.

So now that mom turns 72 and bagged #20, she has set her sights on next year’s hunt.  She said very honestly that as long as she and my father can “pull a string” they will bowhunt.  I believe them.    I am very fortunate to have such wonderful folks for parents.