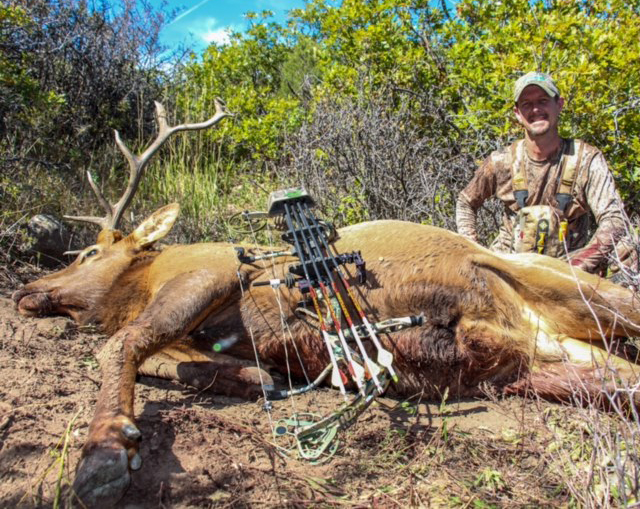 YES! It’s finally here! A week in elk country during the rut! All of us archery elk hunters typically lose sleep thinking of chasing bugling bulls. We pack and repack our gear over and over just to make sure we didn’t forget anything. We spend our summer days in the field scouting and come out of the mountains grinning from ear to ear when we find that “honey hole” that is littered with elk sign. You drive your family nuts by blowing on those elk calls to make sure they sound good.  CAN THE SEASON GET HERE ANY SOONER! Yes, I share this same passion year after year, but in 2015, it was nonexistent. I didn’t seriously think about elk hunting till the middle of September. I had other, better things on my mind. A serious elk hunter would ask, “What could possibly be better than chasing screaming monarchs??”

September 1, 2015, my wife gave birth to our 4th child. Our beautiful baby girl, Oakley Rayne.  Although it was a very special and blessed time to have her in our life, my attention turned toward my wife because she developed postpartum eclampsia. After spending 3 days in the hospital on a magnesium drip, we were not out of the woods yet. We had to closely monitor her blood pressure and made several trips back down the mountain to the doctors. I had the last week of September off for hunting, but I wasn’t even thinking about going. It wasn’t until my wife told me to go and that she would be fine. We had an overwhelming support from friends and family, so I knew she would be taken care of. So I elected to give it a go. But, I wasn’t going to my usual areas that I backpack into, I was going to hunt close to home, in fact, right out my back door. 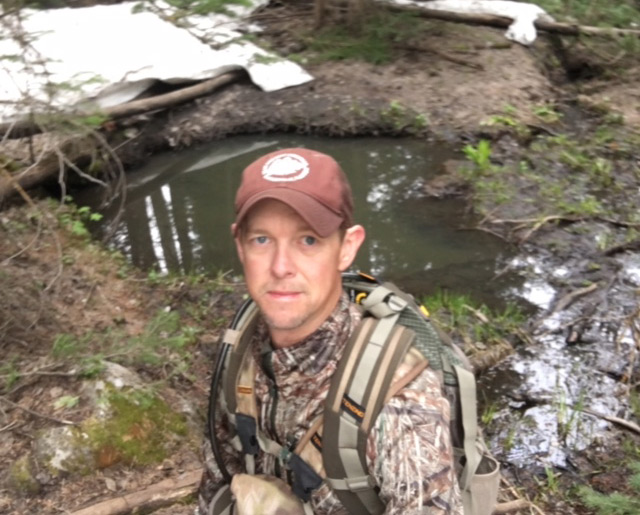 The only scouting I had done during the summer was setting out 1 trail camera in area for a week. When I pulled that camera and viewed the footage, all that was on there was 1 bull. So, my additions for the first day was to hit this area in hopes that something would still be in there. I woke up early that first morning and headed out. It wasn’t long before I started seeing fresh elk tracks on the old 2 track road I was on. I stopped and just waited and listened until it was shooting light.  Once it was light, I let out a bugle to try and locate a bull. Immediately I had a response from about 300 yards out. My excitement level was starting to elevate. I moved closer to within 150 yards and set up in a little opening and started cow calling.

All was quiet for about 30 minutes, when all of a sudden, I heard the sound of breaking branches. The bull ran in front of me at less than 15 yards. I barely had enough time to draw my bow and stop the bull with a cow call. Unfortunately though, the bull stopped right behind a bush to where all I could see was his head. We had a stare down which seemed like forever until the bull had enough and turned and walked away. Leaving me without a shot.

My adrenaline was flowing full force and I was eagerly anticipating on how the rest of the hunt would unfold. I hunted that area the next 2 days without seeing or hearing an elk. Little did I know, that bugle on the first day would be the only elk I would hear the entire week.
On the third day of my hunt, I teamed up with friend and team member, Matt Guedes. Matt was in the same boat as I. Unable to do any scouting before the season, so we decided to share and hunt some of our “honey holes” that have been productive for us in the past. All ending in the same results. No elk seen or heard, but the sign was there. We sat over wallows and trails. Tried cold calling, nothing seemed to work. This went on for 5 days and the options were running out. Finally, the last weekend of the season and I decided to head back to the same area that I called in that bull the first day but, I was going to try on the other side of the hill instead. As I was walking into the area, I noticed 2 cows feeding from east to west on a hillside  about 500 yards in front of me. Since my tag was for an either sex, I decided with it being the last weekend of the season, that I would try and cut them off and see if I could put an arrow in one. As I moved closer to within 200 yards, I realized they were in some very thick oak brush and there was no way to get any closer for an ambush. So I set up in a fairly large opening and started cow calling in hopes that they would venture my way. I sat and called for over an hour, catching glimpses of them going through the brush as they walked past the opening and into the draw to the west. I called for another 45 minutes and nothing.

The discouragement was starting to set in and I decided to pack up and take a walk to the east where the cows had come from and see if I could see anything. Just as I got up and took about 10 steps, I caught a glimpse of something moving in the direction I was going to head in the brush. I brought up my Vortex binocs and just caught a glimpse of antlers moving in the brush. A bull, and he was heading my way! I backed up to where I was sitting before and quickly set up. Just as I nocked an arrow, I could see his tines as he made his way to the opening. Once he hit the opening, he froze, looking around. I let out some soft cow calls and he started walking into the opening. I brought my Bear Archery Assault to full draw and the bull stopped. I didn’t have a clear shot because of the brush I was sitting beside, I let out a few more very soft cow calls and he started walking again right into my window at 32 yards. I sent the Black Eagle Outlaw arrow tipped with a Rage Hypodermic right into his ribcage. The bull ran straight uphill and expired. Yes! A beautiful 5×6 on the last weekend of the season, I will take that any day!

One of the things I learned on this hunt is that if you are in an area with lots of sign, stay with it. I have been so use to hunting areas where the elk are very vocal and when they were not talking in the areas I hunted during this week, I automatically thought that they were no longer there. In some cases, that might have been true. A lot of different factors could have played into why they were not talking. Pressure, moon phase, laryngitis, who knows, but one thing is for sure, it wasn’t because they were not there.

In closing, although talking with the elk is all part of the hunting the rut experience and we look forward to it every year, there are always those “one off” years where you don’t hear a thing or you don’t have the time to scout your areas. Stay patient and persistent and enjoy what God throws at you during your silent season.