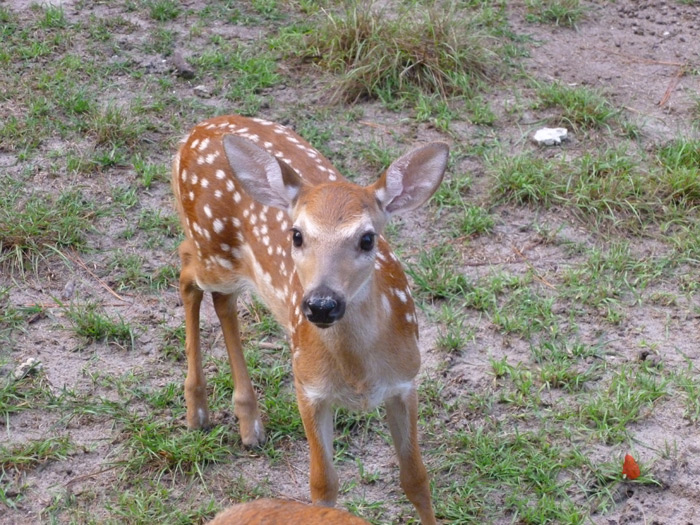 This fawn and her brother only have a mom as a common parent. DNA research revealed that a large percentage of twin fawns have different bucks as their daddy.

About a decade ago, I learned something new that shook my preconceived notion about whitetails. We were working in the Monongahela National forest of West Virginia. I was working with a team of researchers from both WVU and University of Ga. I helped them for a few days filming the capture of whitetails in a contraption called a “Clover Trap.” This fish-net and rebar device is nothing more than a large box trap with a dropping door triggered by a deer bumping into a trigger adjacent to the bait. To say the deer was a bit disturbed initially would be an understatement…but it worked without drugs.

Blood samples were taken from each doe and later from her offspring. DNA testing turned the light on in the room. The result of this study revealed that an estrus doe might have multiple suitors. She may have twins with different fathers. This was some of the first DNA field-testing done on whitetails and it yielded some dynamite info.

DNA is important. I consult with a company whose scientists developed the most unique detergent and soap in the industry. Unlike all other detergents it’s chemistry is based on a straight carbon chain which allows it to rinse completely out of fabric while pulling with it old detergent residue, human scent and dirt.

Recently they re-packaged their product line. Same DNA, new look. You know the detergent as Sport-Wash but now its new bottle says ZERO. We chose that name because it describes the result of using the new Sport-Wash ZERO. Zero odor, zero residue, zero UV and zero irritation. You can find it at Gander Mountain stores nationwide.

Sport-Wash ZERO cleans so well that it actually revives high tech fabrics like Gortex and Under Armor and allows them to function like new. It carries the same genetics as the old reliable Sport-Wash, but in a new bottle. DNA matters.