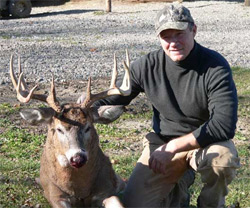 Pennsylvania was the test balloon for using antler restrictions as a tool for managing the deer herd. The restrictions required 3 or 4 points to a side depending on region. The very idea that the Pa. Game Commission was going to restrict a hunter from shooting an 80# spike buck was met with resistance.

So much resistance, that PA deer biologist, Gary Alt had to speak to tens of thousands of hunters at statewide meetings to explain the strategy of quality deer management. The new strategy was narrowly adopted in 2002.

Prior to 2002 over 90% of all bucks taken by hunters were yearlings (1.5-year-old buck). The statewide harvest of mature bucks was a disappointing 5%. It was rare to see a 2.5 year old or older buck. Most of my friends were mounting the odd 10-point yearling with string bean antlers. Today the herd dynamics has changed and there are many quality bucks to hunt in the Keystone state. My son Cory took a 170 B&C two miles from the house and there have been four others taken recently that were in the 150+ category.

Buck taken by Cory Nolan the Monday after Thanksgiving, chasing a doe.
Pa has the genetics and surely has the quality habitat for great whitetails but if you put them in freezer-wrap when they are teenagers… you lose. On the other hand allowing bucks to mature helps a herd in many ways. The buck to doe ratio is the foundation of the win. The term means just what it says; it compares how many bucks to does are in the herd.

Pennsylvania once had a terrible buck to doe ratio. It hovered around 6 to 1. That is a lot of does. Add to that, most Pa. bucks were walking around with their first set of antlers and you have the junk herd we hosted. The real problem with the bad ratio is that many of the does were not being bred during the brief November rut. A large percentage of the does were getting bred in December or in January. Whitetail fawns are dropped 201 days after breeding. This means late born fawns were showing up in June, July and August. Doe conception dates were spread across 100 days.

The common Pennsylvania trophy pre 2002.
Studies have shown that late born fawns have a low survival rate and late born bucks are most often spikes when 1.5 years old due to nutritional deficiencies. That was evident in our deer herd. In combination with the antler restrictions in 2002, Pennsylvania increased the doe harvest dramatically. Prior to 2002, we had an estimated 1,000,000 deer in the state. Habitat damage was evident across vast areas. However, with the reduction of doe numbers and the increase of mature bucks, good things began to happen.

With antler restrictions, many bucks were not available for harvest when they were 1.5 years old as their antlers may be under the minimum size. The bucks that made it through got to be 2.5 years old and now had their own established and familiar home-range. Now they were not as easy to shoot as a dumb yearling buck and many of them evaded hunters and got even older. Now we have quality bucks statewide.

Most states above the Mason-Dixon Line have the habitat and genetics to grow quality bucks; if we let them grow.
A study done by Auburn University recently conducted some interesting whitetail research that relates to the scenario I just described. In a 430-acre pen they determined the buck to doe ratio. In 2008 and 2009 the ratio was 1 to 2, that is one buck to two does. Researchers logged in conception dates of fawns.

Next, they managed the herd so there were not only more bucks but also more mature bucks in the area. The buck to doe ratio in 2010-2012 was one and a half bucks to one doe or 1.5 to 1. They found that most does were synchronous and bred sooner, meaning they were bred during the first rut. The result was fewer late born fawns and the compression of births helped to lessen the impact of coyote predation. Now that you understand the buck to doe ratio secret explain it to your state DNR and fix your deer herd.