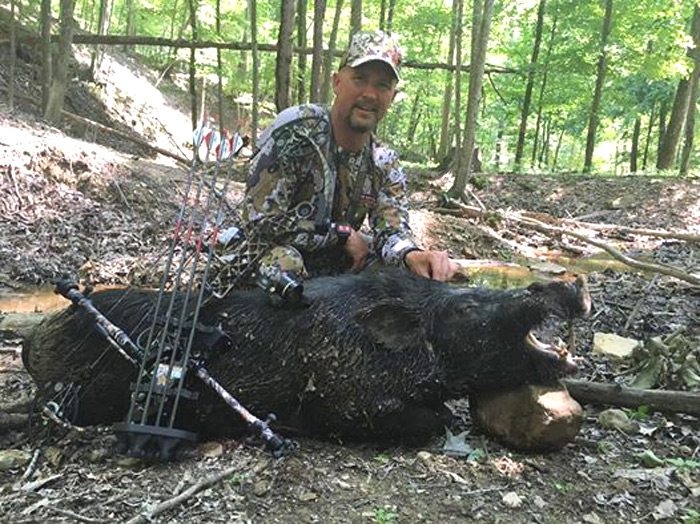 It is a scorching hot day in Northwest Pennsylvania, and I am watching two hens walk across my backyard with their tiny poults. The poults are running all over the place in search of bugs to eat. They move as a group, while their mothers’ watch for any type of danger.  Watching them brings a smile to my face and my mind floats back to the day I saw Big C for the first time.

It was the middle of July 2015, and I was on the computer and visited www.blackeaglearrows.com looking for some new hunting arrows. My eyes were fixated on the Black Eagle Carnivore arrows that were dipped in Mathews Lost Camo. My heart skipped a beat and I quickly clicked to learn more about these special arrows. I had read and seen enough! I ordered a dozen .001, 350 spine Lost Camo Carnivore arrows,  gave my shipping information and clicked to finish the transaction. I was so excited to have found these arrows and then waited patiently for them to arrive.

BEA has amazing fast shipping and the arrows arrived two days later. I grabbed the USPS box and ran to my basement to open my prize. I was not disappointed, the Lost Camo Carnivore arrows looked amazing. They were exactly what I hoped they would be with amazing detail in the Lost Camo, two white and one red Blazer vanes. I spun each arrow to look for imperfections and found none. My arrow saw clicked on with a buzz and I carefully cut a half dozen of the arrows. I took my time to methodically glue in the inserts and let them be for the night.

The next morning, I went back to my basement and put field tips in my new Carnivore arrows. I spun the arrows again and marked each arrow 1-6. I named the #1 arrow Big C and gave him a lucky kiss. Grabbing my bow and heading outside I took Big C and his 5 brothers outside for a test shoot. These arrows flew great and were a breeze to pull out of my target. Big C was getting a workout and on the 4th round of arrows, he killed one of his brothers. A Robin Hood ended the life of brother #4. Big C didn’t have a scratch on him at all. I flexed him and looked him over carefully and he was in perfect shape.  All through the summer I shot my targets dreaming of when I could get them some action on a live animal.

October finally arrived and traveled to Southern Ohio for a hunt at Tusk n Tines Outfitters. While we were there, Big C made his first kill, a 25 yard shot on a 200 pound Russian Boar. The boar did not go far and I heard him pile up. I got down out of the stand and began trailing the boar. I found big C not far into my tracking job. The Grim Reaper head was in perfect shape and Big C was coated with crimson. I quickly found the hog not far away and headed back to the lodge. I cleaned my arrow, replaced a new Grim Reaper head and slid this lethal combination back into my quiver. I couldn’t have been more please with his performance. 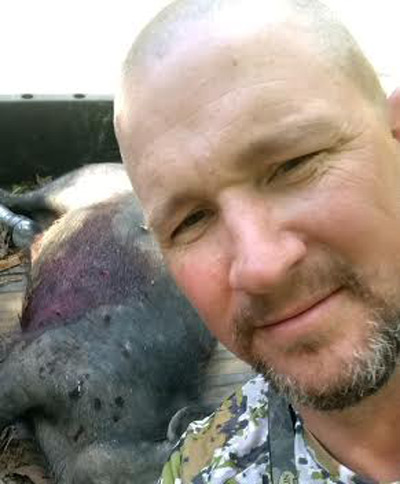 We saw a lot of time in the Pennsylvania woods during October and the beginning of November. I passed on many shot opportunities at doe and smaller bucks. The first weekend of November, I traveled back to Southern Ohio to deer hunt and on this early morning, I slowly climbed my stand and carefully pulled up my bow. Big C came out of his quiver and was nocked and ready to do its job.

It didn’t take long before I saw a nice 10 point feeding toward my stand. I ranged the 10 point at 46 yards. As he fed, I drew back, settled the HHA pin behind the front shoulder and touched off my release. The shot found its mark, blew through the buck and stuck in the ground. I watched the buck run out of sight and then heard him crash. I left my perch 20 feet up and went to retrieve my arrow. I found it easily and once again it was covered in red blood and in perfect shape. I then followed the easy to follow blood trail to my Ohio 10 point. 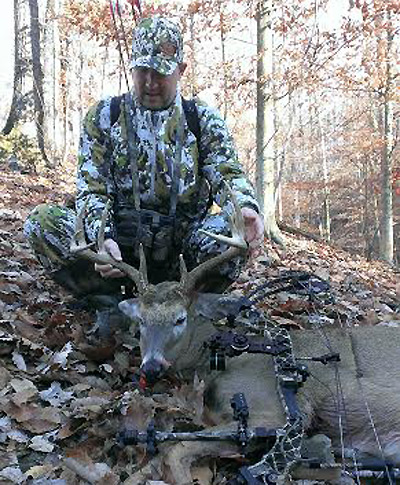 I was having an amazing hunting season so far, and the durability of my #1 arrow, Big C was being tested to the limits. At this point I didn’t know it, but the season was about to get a whole lot better.

On the evening of November 14th, I was hunting my favorite stand in Pennsylvania. It was the last day of archery season and I was after a buck named Pirate. At 4:15 pm he arrived on schedule. Everything went as plan and I knew the shot was a killer. The buck was roughly 18 yards away and the hit was perfect, right behind the front shoulder. The buck I had named Pirate went less than 60 yards. When I finally reached him, he was laying on my arrow. I thought that was the end for both the buck and Big C.  I rolled the big buck over, and to my amazement my arrow was perfectly fine. The Grim Reaper head was in great shape as was my arrow.  I was definitely falling in love with this incredibly tough arrow. 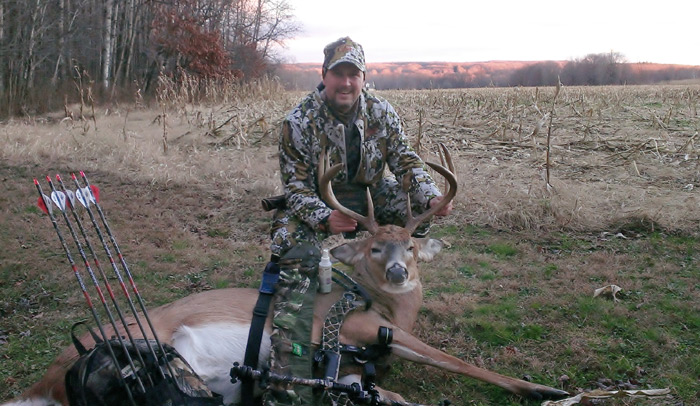 Archery season was over so the only time I pulled out my arrows and shot was when I practiced periodically in my basement. Later on I reprinted the #1 in his white vane, put a new Grim Reaper broadhead on and got ready for Spring Turkey Season. I was ready to unleash havoc on the PA Thunderchickens.

On the morning of May 12 I headed out to the ground blind and settled in to hunt some longbeards. I had roosted two birds the night before and was hoping they would read the script and come to my seductive calls. The sun came up and the gobblers began to thunder back and forth to each other. I watched as a Fisher climbed the tree where the two birds were roosted. The birds saw the Fisher and bailed out of the tree like their tail feathers were on fire. Thinking the morning was over, I packed up and headed back to my truck. On the walk back, I saw a gobbler and hen in the open field. I crawled 25 yards to get closer to the love struck bird. I ranged him at 42 yards, plucked Big C from the quiver, nocked in place and drew back. I watched as the arrow once again found its mark and the gobbler flopped on the ground. I found Big C in the grass not far behind the fallen gobbler. I was beginning to believe that not only was my #1 arrow indestructible, it also had a magic heat seeking feature the company didn’t tell me about. 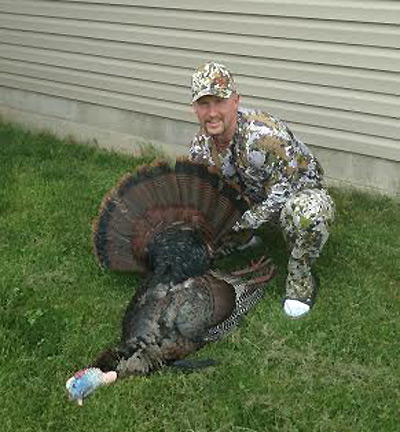 With turkey season over and my tag filled, I was looking for something to hunt. I called Coby Jent at Tusk n Tines Outfitters to see if he had any opening for a Russian Boar hunt. I booked the days of June 11th and 12th and was excited to return to the outfit.

I arrived at Tusk n Tines on the evening of June 10th and talked with Coby about some large Russian Boars. We spent the whole day on the 11th stalking hogs looking for a big boar. We saw many nice hogs just none within bow range. On the morning of the 12th, Coby and I decided to start at first light and it didn’t take long before we located 3 large hogs resting on the hillside. Coby and I  crept in toward the unsuspecting boars. Big C was nocked and fitted with a new Grim Reaper Hog Head. The Range Finder read 23 yards as one hog began to stir. The largest hog in the group was lying on his side exposing his heart and lungs. I took a deep breath and came to full draw. The pin floated on the giant boar’s heart. At impact, the boar sat up and rolled down the bank. It was like watching it in slow motion as the 300 pound hog rolled over on my arrow. This time it was more than the arrow could take and as the boar rolled I watched it snap in half.

And that ended the remarkable journey, a number of kills with my #1 arrow I named Big C. We had been through so much together in the past year. Big C had turned into my killing machine, my good luck charm. I was happy to have killed such a wonderful boar, but I was hoping maybe, just maybe, my indestructible arrow would somehow make it through again. So now, my new Go To arrow would be #2. Stay tuned. I have a feeling a new set of adventures are about to happen.