A 12-year-old girl who likes to hunt big game with her father sparked an online firestorm after posting photos of herself online posing with a giraffe and a zebra that she killed with the help of her dad.

Aryanna Gourdin and her father Eli took the trip from Utah to South Africa last week. Gourdin told ABC News she posted the photo on Facebook of her posing next to the dead zebra with a bow and arrow and the caption, “One of my dream hunts for sure,” to share the experience.

“It’s something I cherish and enjoy and I want other people to see what I experienced,” she said in an interview with “Good Morning America.” 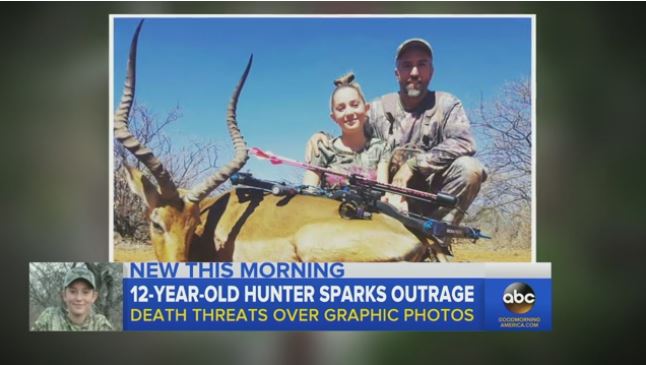 Beyond Cecil the Lion: Trophy-Hunting Industry in Africa Explained

The trip was one of many the pair have taken over the past five years, but her Facebook postings quickly made her a topic of heated discussion. One photo received over 73,000 comments, with some users are calling her “sick” and an “animal hater.” Supporters posted encouraging messages, including “Let the haters hate! Hunt away Aryanna.”

In a post on Tuesday, Gourdin acknowledged the uproar. “My last profile picture was very offensive to others and I have learned my lesson with that pose, [sic] I apologize.”

Some of the more extreme comments went so far as threatening Gourdin and her father’s life.

“We’re proud to be hunters and we’ll never apologize for being a hunter,” Gourdin’s dad Eli said.

Eli maintains that the hunting farm the Gourdin’s visited offered the giraffe to for them to hunt because it was a problem animal. “They actually had an older giraffe that was eating up valuable resources other giraffes need to survive,” he said.

He also said that the meat from the animals they killed was donated to a local village and will feed 800 orphans over the next month.

This is one of several recent instances in which hunters have faced vehement criticism online. Last July a Minnesota dentist named Walter Palmer created international headlines after posting photos online of a lion known as Cecil that he had killed in Zimbabwe.

Despite the controversy, Aryanna said she doesn’t plan to give up one of her favorite activities.

“I would never back down from hunting,” she said. “I am a hunter and no matter what people say to me, I’m never going to stop.”

BHN NOTE:God Bless you and your family Aryanna. This yet more proof of the ignorance and intolerance of the left.