by Barry Nofsinger
in Bowhunting Posts
0 0
A A
1 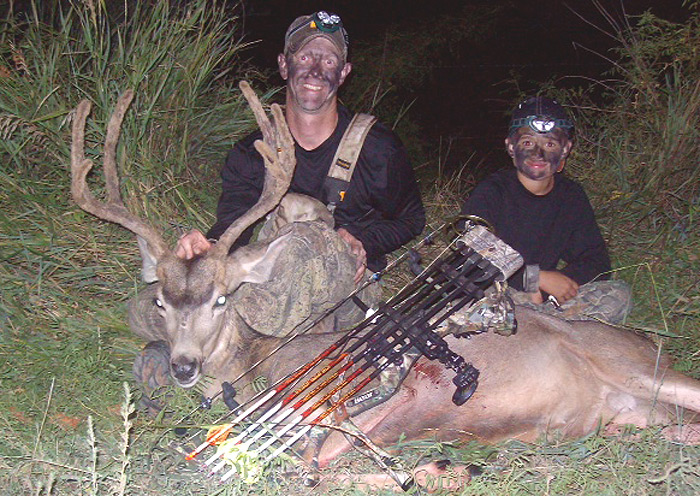 Father and son, the way it should be.

The most enjoyable times I have in the outdoors is when I get to spend it with my kids. Being able to share the excitement of catching a trout, shooting a rabbit or arrowing a mule deer buck with them, is memories that will be remembered forever. And the following story will be one of those I will cherish forever.

My then 11 year old son Mateo has accompanied me on several hunts. He has backpacked into the wilderness with me pursuing elk. He has sat in a treestand all day waiting on a bear to show up. And he has spent countless hours in a ground blind hunting turkey and deer. Although we have shot several turkeys together, he had yet to be with me when I have shot an animal with a bow. Things just never could quite come together when he was with me, until last year’s mule deer season.

I started the season with a goal, to shoot a big mature 4×4 that we had been seeing on the ranch all summer. It was going to be him or bust. Once the season started, and after several failed stocks, I elected to take a different route and set up a ground blind to ambush them as they left their beds and head to the alfalfa fields to feed for the night.  We left the blind there for a couple of days to let the bucks get used to it and on the third day, we climbed in for an evening hunt. The buck I was after was running with 4 other bucks. 1 smaller 4×4, 2 3×3’s and a forky. Just as the sun started to set, I caught movement coming from the edge of the trees, there he was the big 4×4. Walking with 3 of the other bucks.

When they got to within 100 yards of our set up, a coyote out in the field, not too far from us, decided to start his evening serenade. The bucks stopped, turned and trotted off in the opposite direction. My heart just sank. As I was contemplating on what our next move would be, whether it be head in the direction they ran and try to put a sneak on him or try to call in the noisy coyote and give him a dose of carbon, my son excitingly whispers, “Dad, BIG buck!” He was looking out one of the side windows to our far right. I quietly got up to take a look and could just barely see his body walking our way through the mesh in the low light. He was less than 50 yards and was going to walk 20 yards in front of us. I asked him, “How big is he?” He turned and looked at me with the excitement in his eyes and he said “He is huge!” That got my heart racing back to full tilt. I quickly got my Bear Archery bow ready and waited for him to appear in the open window. All the while my son is saying, “Here he comes, here he comes!”

Finally, the buck appeared for a clear view. I brought up my Vortex binoculars and quickly saw he was one of the smaller 3×3 bucks that was running with the big 4×4. I told my son that he was not the one I wanted, I saw the look of sadness in his facial expression. It quickly dawned on me that this was the moment he had waited for. To actually be with me and see me shoot an animal with my bow. The light was fading fast and I had a big decision to make. I asked Mateo, “Do you want me to shoot this buck?” His answer was, “Yes, but if you don’t, I understand.” That was all I needed to know. I drew back the Black Eagle Outlaw and sent a Rage Hypodermic right through his heart. As the buck bolted out of sight, I turned to Mateo and He was shaking with excitement when he uttered the words, “Dad, you got him! That was so cool!!”

We gave the buck a few minutes and grabbed our headlamps. I told Mateo that I wanted him to track this buck. Without hesitation, he was on the trail. The buck surprisingly ran 300 yards in a big circle and fell right by the road. Mateo was so excited, that you would have thought he shot that buck. That excitement should be in all of us if you think about it. I know when my kids harvest an animal, I am just as excited as they are, so why should I be surprised of his excitement? I shouldn’t. Because he is a hunter and he shares the same passion as any veteran hunter. And most of the time that passion is stronger in our younger generation, which is the way it should be and the way it needs to be.

I am very proud that I took that buck and the euro mount hangs in the trophy room as a reminder of the story line that will never be forgotten. The size should never matter, but the passion, excitement, and the love of hunting should always matter. And our youth is the key to carry on that tradition.