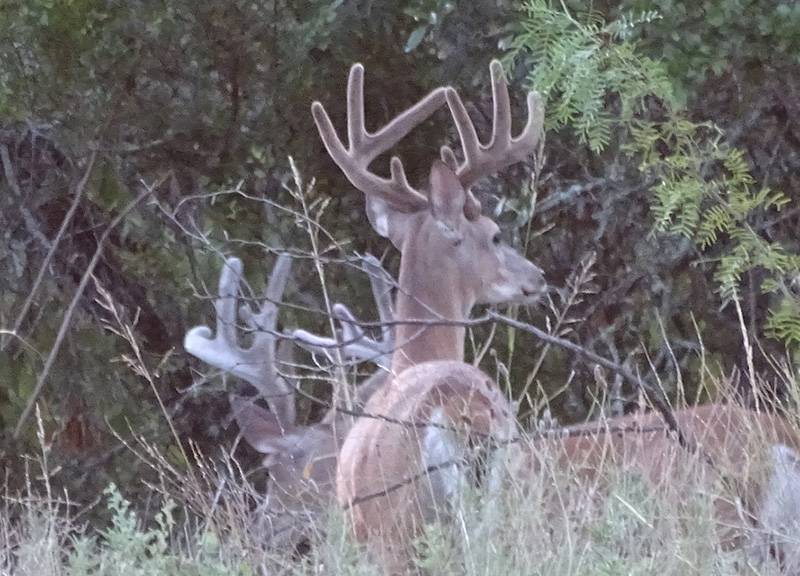 Ask anybody that bowhunts deer with me and they will tell you that I always set up multiple stands in the deer woods. This works during hunting season as well as when I take pictures of deer the rest of the year. So quite often my pictures are from different places.
My primary goal is to find out travel routes of the bucks and does that I see in the valley where my food plot is right now. Above all, I want to know where they pass through between the valley and their bedding area.
But I do not want to know their route so I can hunt it. On the contrary, I want to know because I do NOT intend to hunt it.
Deerhunting is all about pressure. You want as little as possible. And for mature bucks you can make that statement times 10. In my opinion, the fastest way to STOP seeing a mature buck is to walk around in his bedding area … or the route he uses to get there.

Ok, here are some August pictures I took from a piece of woods adjacent to my valley.

My setup here is a permanent ground blind constructed with old, rusty tin panels nailed to a 4×4 wooden frame. It’s painted black inside and has windows to see through as well as a rusty tin roof. I’m on the edge of a very thick stand of woods.
After daylight two bucks came up unseen, from behind me, and walked on by. I got my camera going. 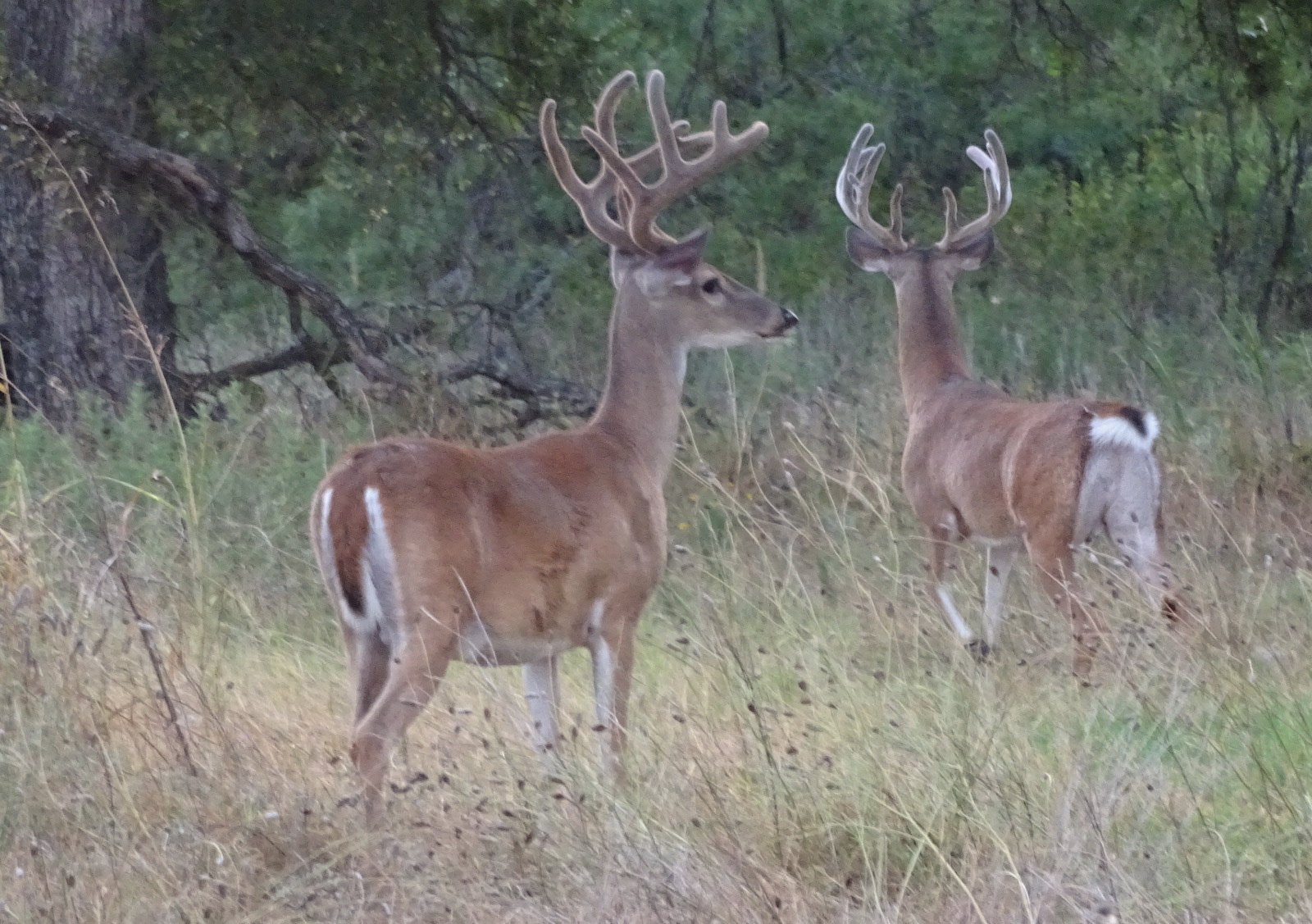 The buck on the left hurried off in the direction it was looking and the whiter racked buck stopped at the edge of the woods. 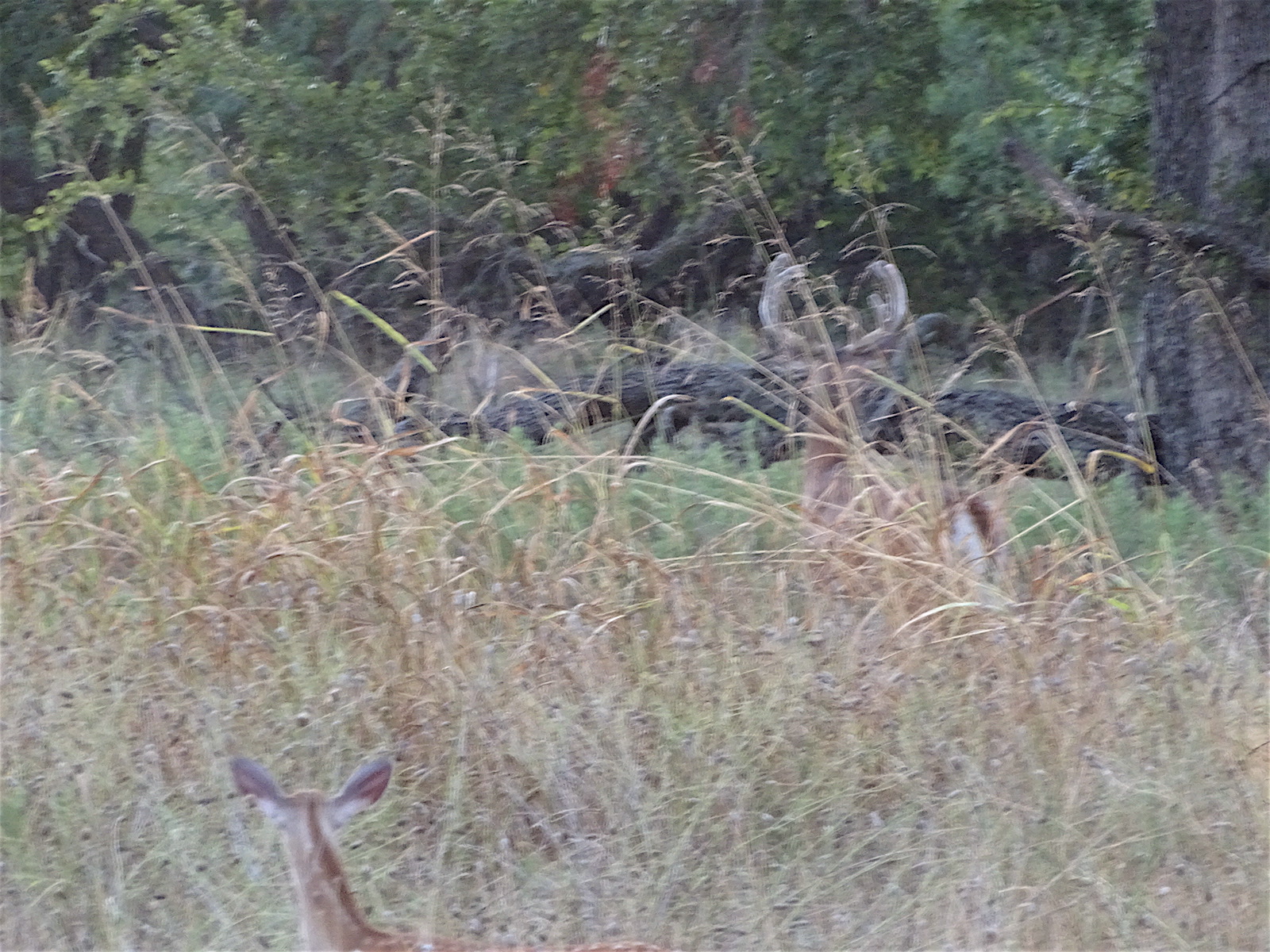 Right then I got a little surprise. With my attention focused on the whiteish racked buck I missed seeing an 8-pointer and a fawn that came up on my left. I took a quick picture. 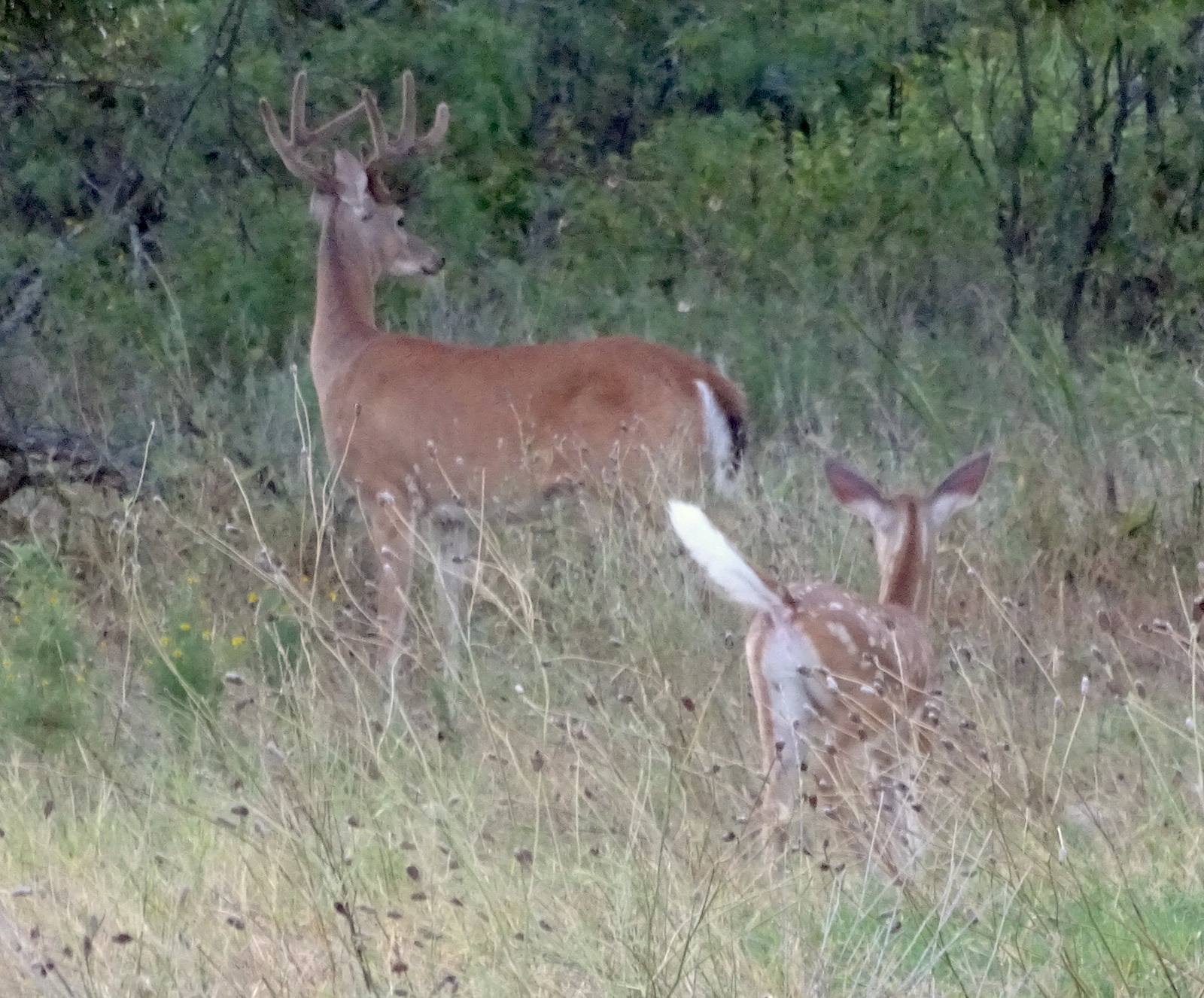 And swung back to the whitish buck.He was standing in some tall weeds. 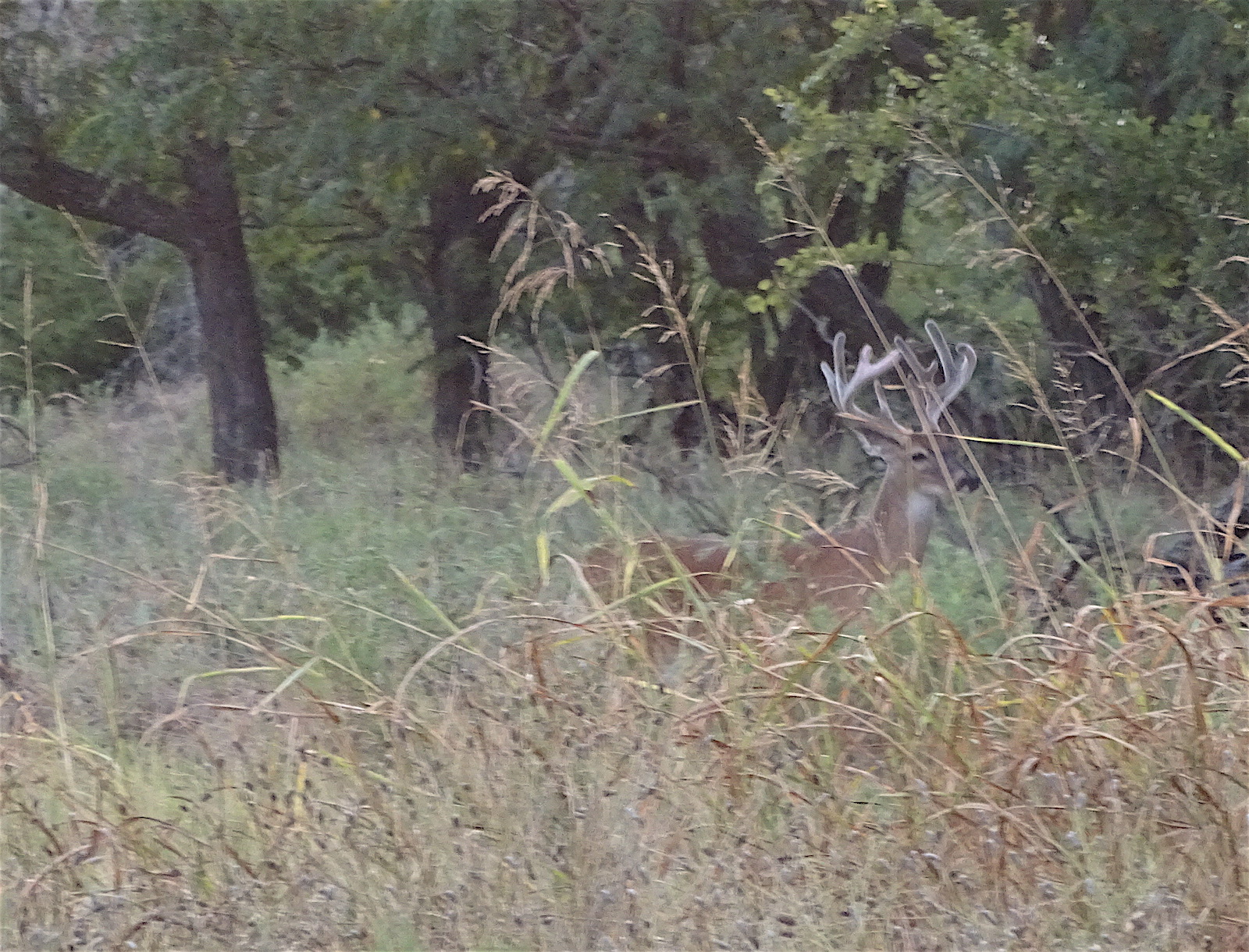 He started walking closer to the woods line. 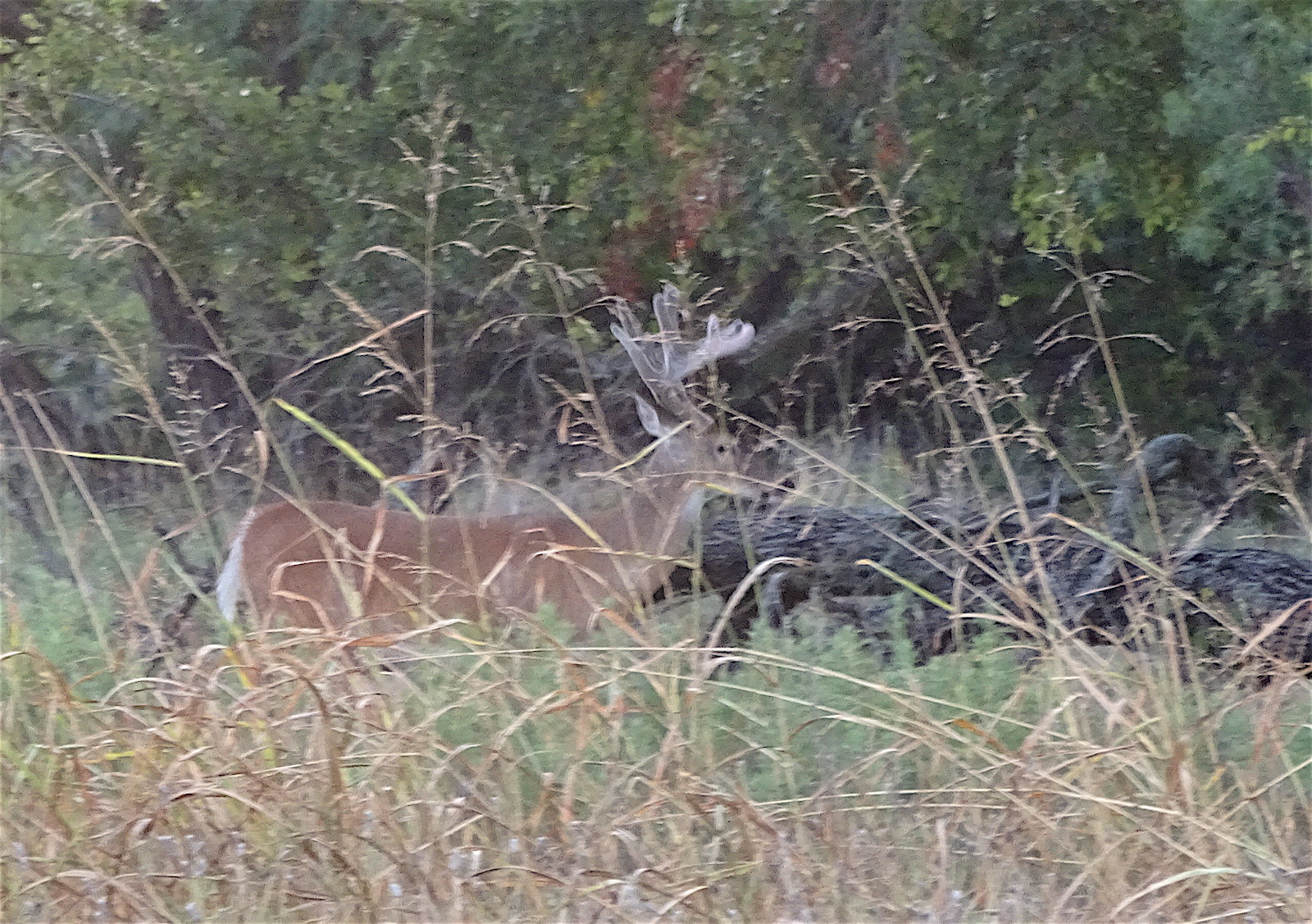 Surprise again, the 8-pointer came by so close he almost could have got inside my ground blind. He raised his flag and paraded toward the whiteish racked buck. 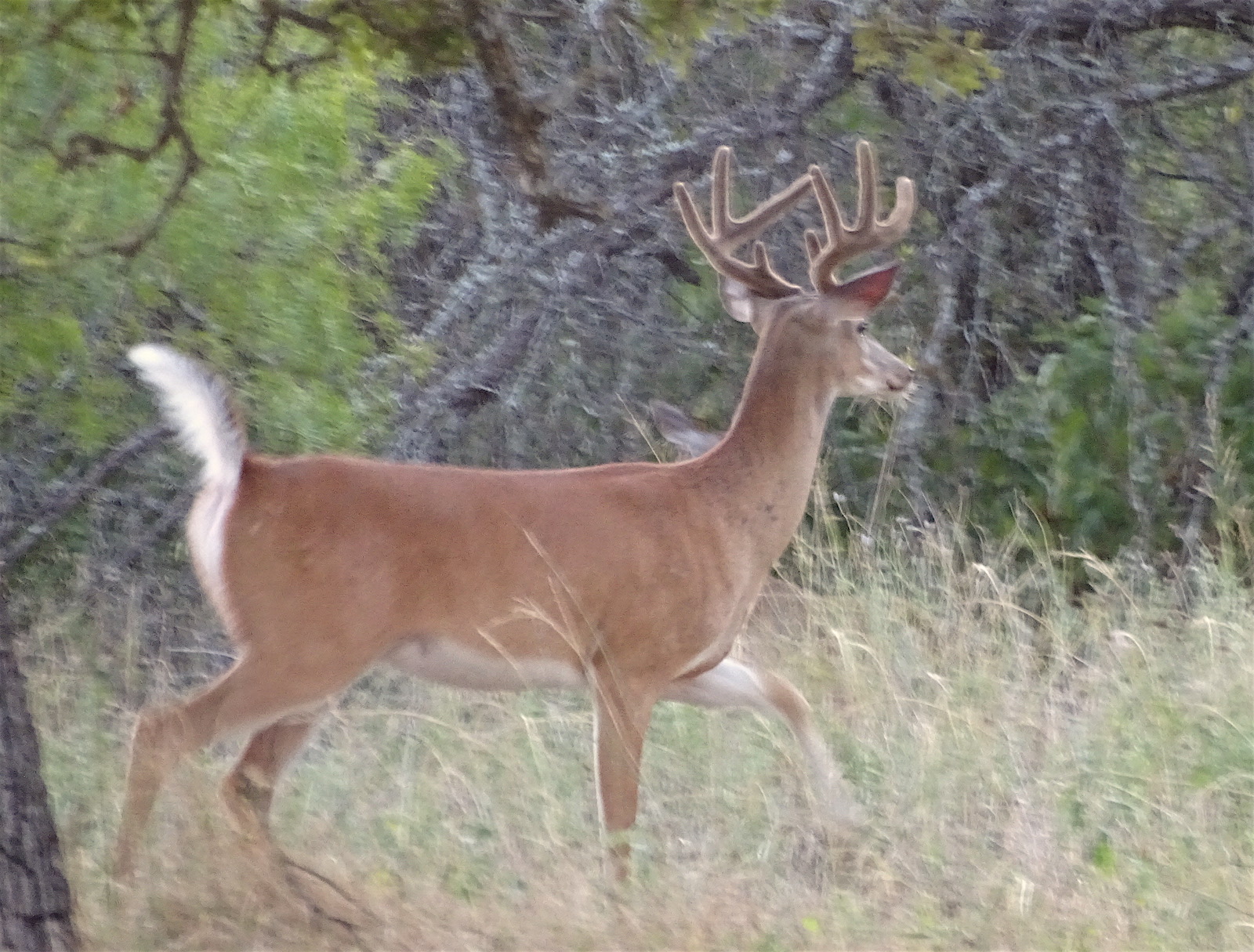 The 8-point stopped and lowered his flag when he got to the Ol’ Whitey buck. 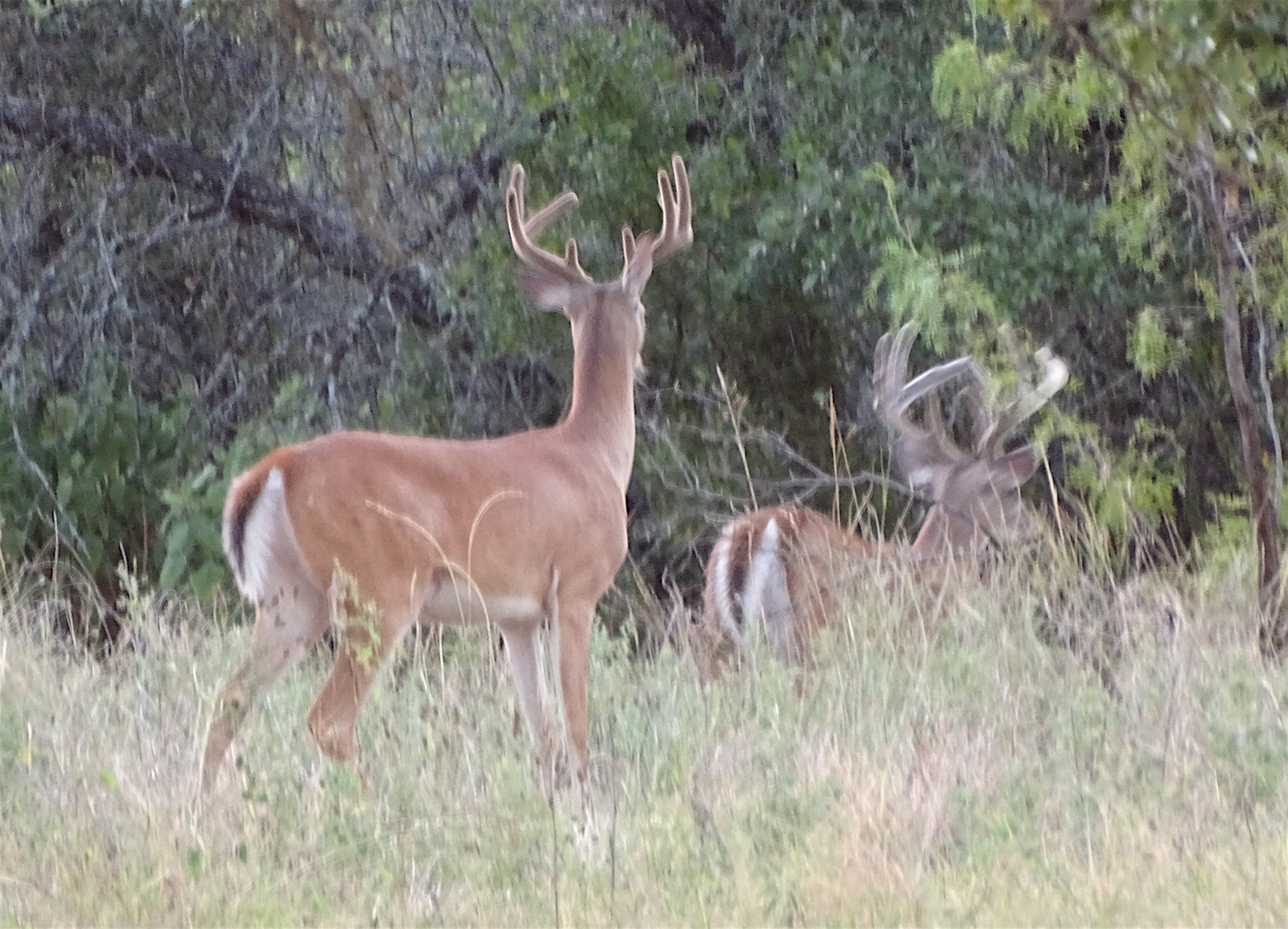 So far the 8-point had been totally ignored. Ol’ Whitey took a few steps closer to the woods. 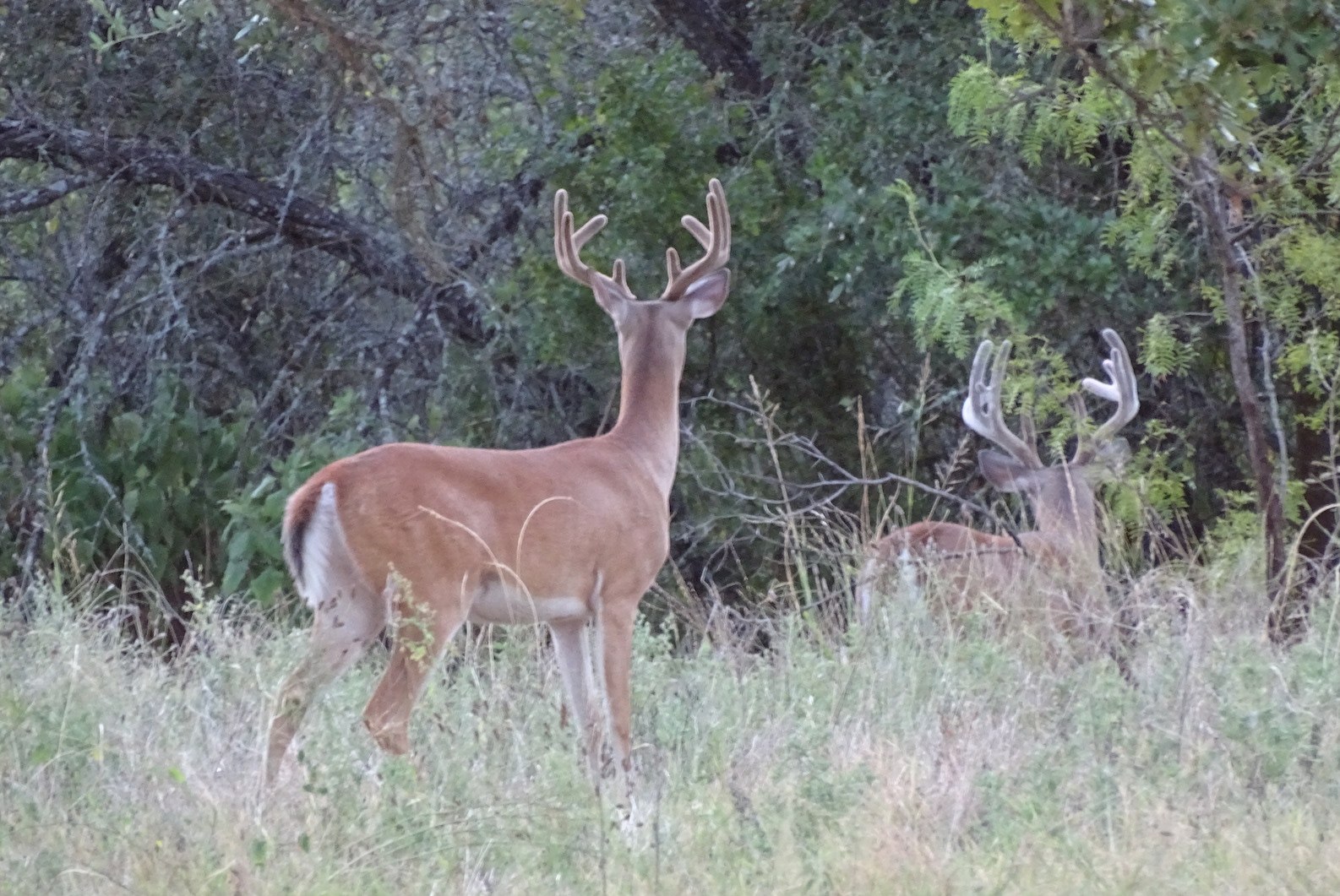 The 8-pointer walked over to Ol’ Whitey. So far Whitey had not looked at him, not a single time, and he was not going to. But I guarantee you Whitey knew the 8-point was there all the time, he just was not going to acknowledge him. 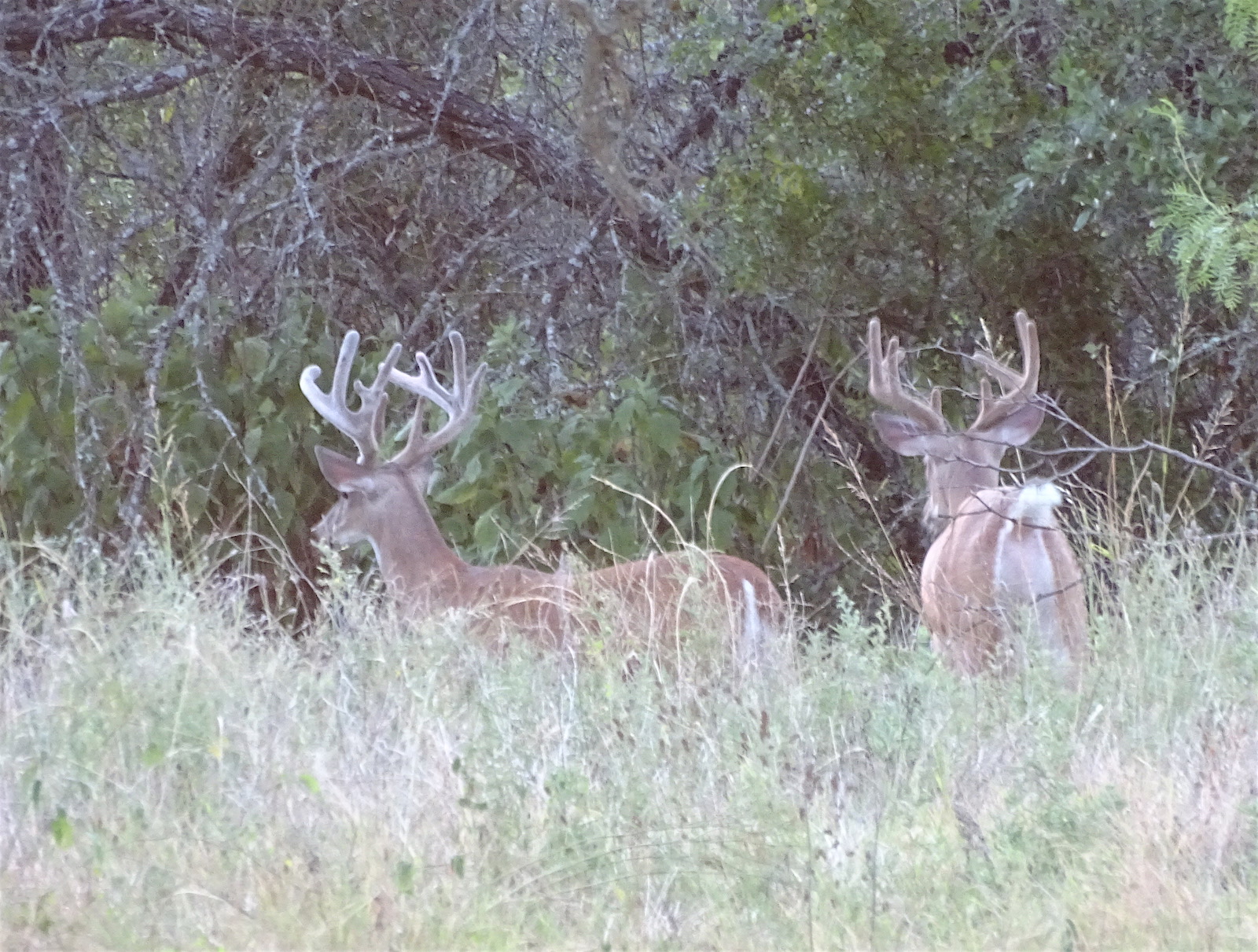 The 8-point stepped ahead of Whitey and stopped. Whitey continued to ignore him and once again walked right past him. 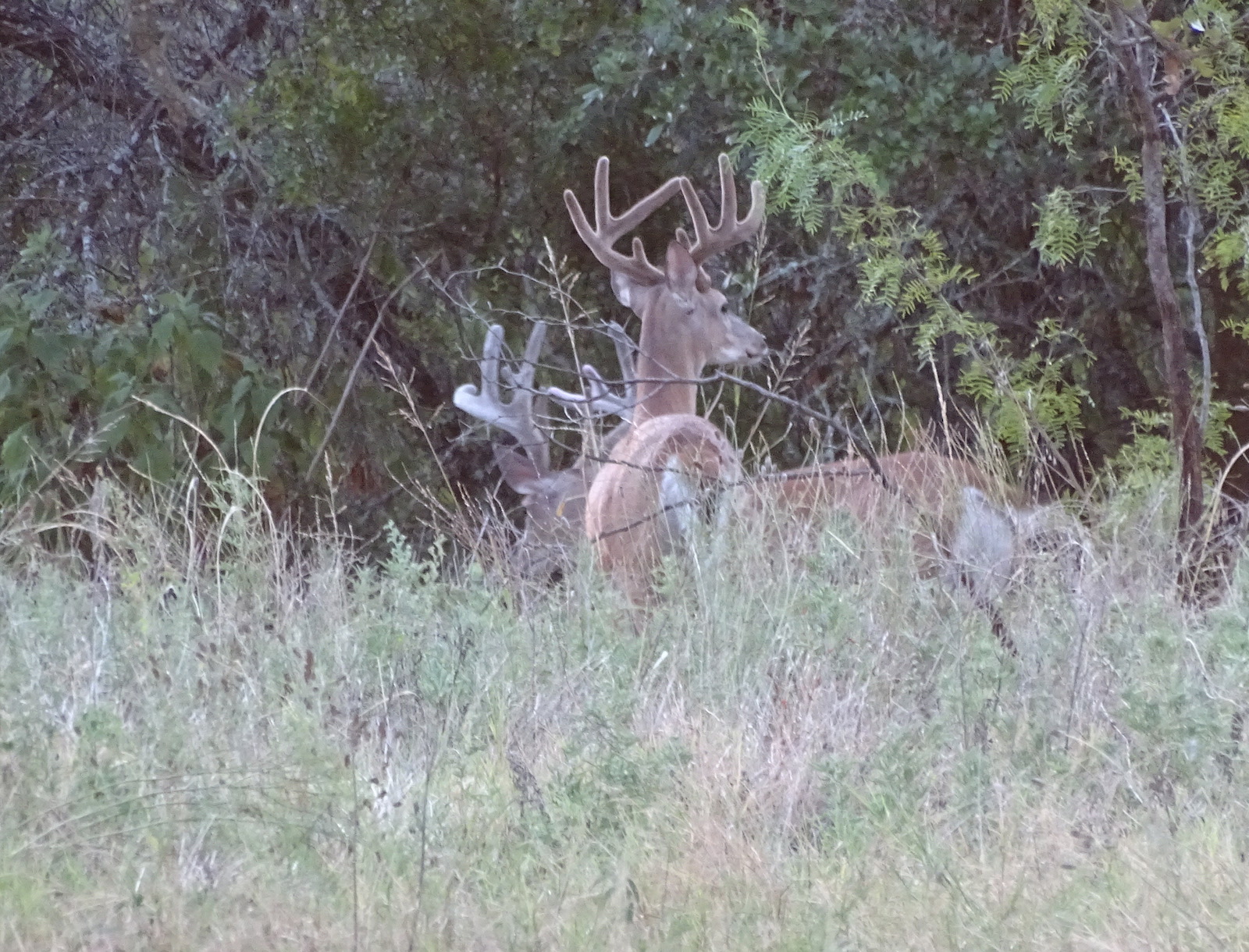 And the antlered duo went into the trees and quickly disappeared from my view. 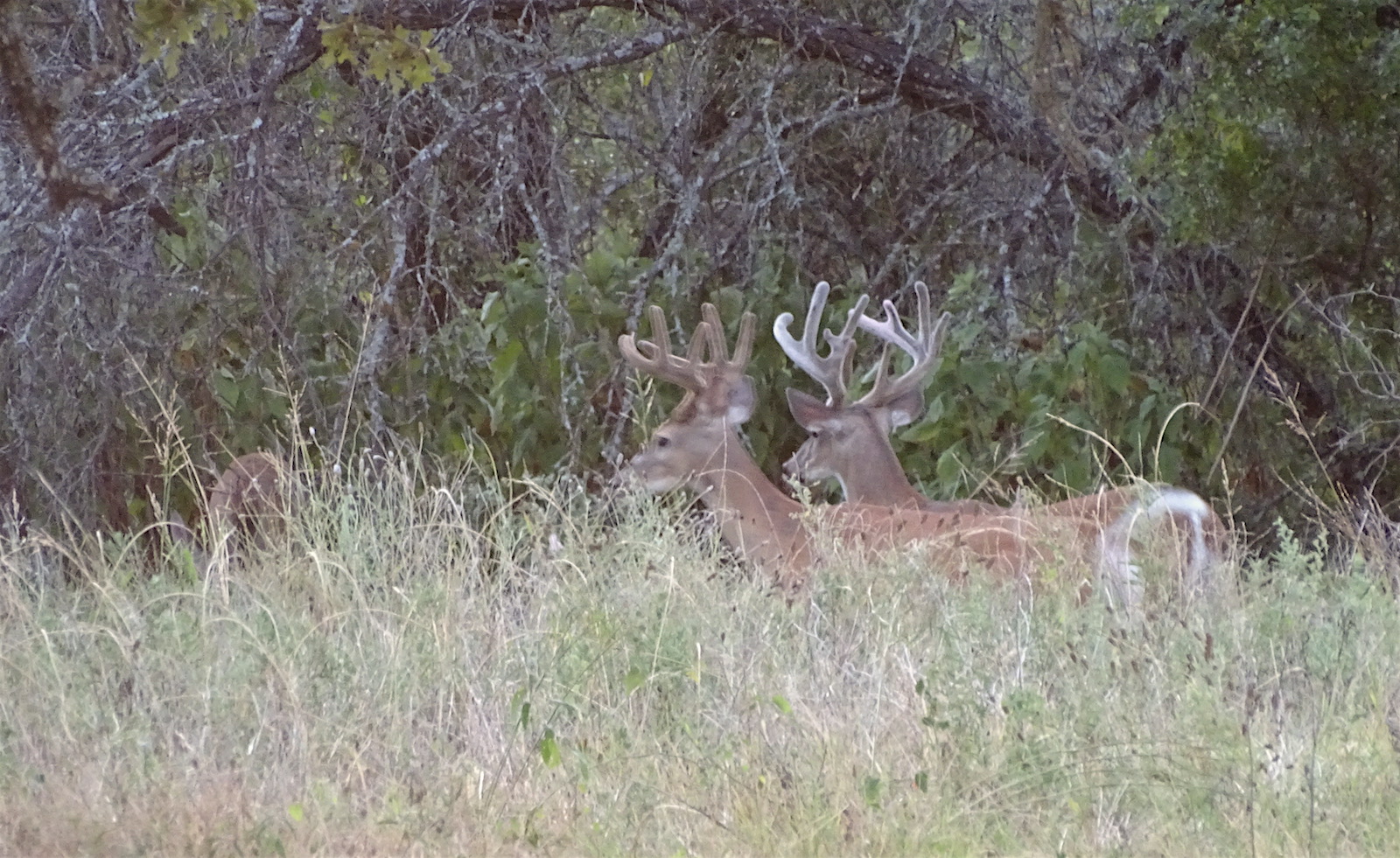 The next hour I saw a few deer at a good distance from me. Once I had spent 30 minutes without a deer sighting I took, me and my camera and binoculars back to the house.