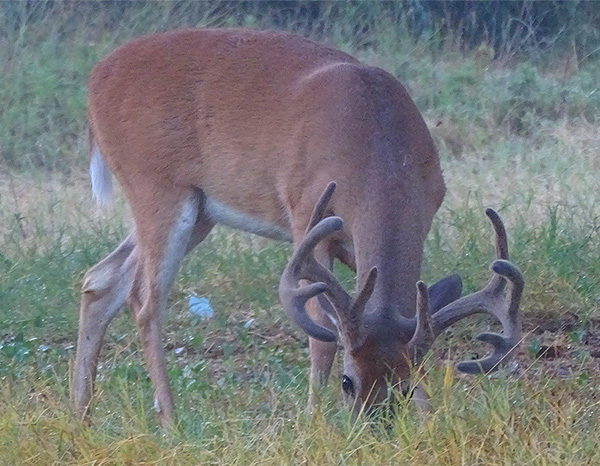 Three days after the food plot was planted the first green leafed sprouts poked out of the ground. That’s pretty fast. So the next morning I slipped out in the dark and got into one of the 3 ground blinds I have in that area.

At first light I noticed the shape of a deer moving in the woods to my left. It was a buck and I framed him up in my camera and took his picture. He continued walking and was quickly out of sight. 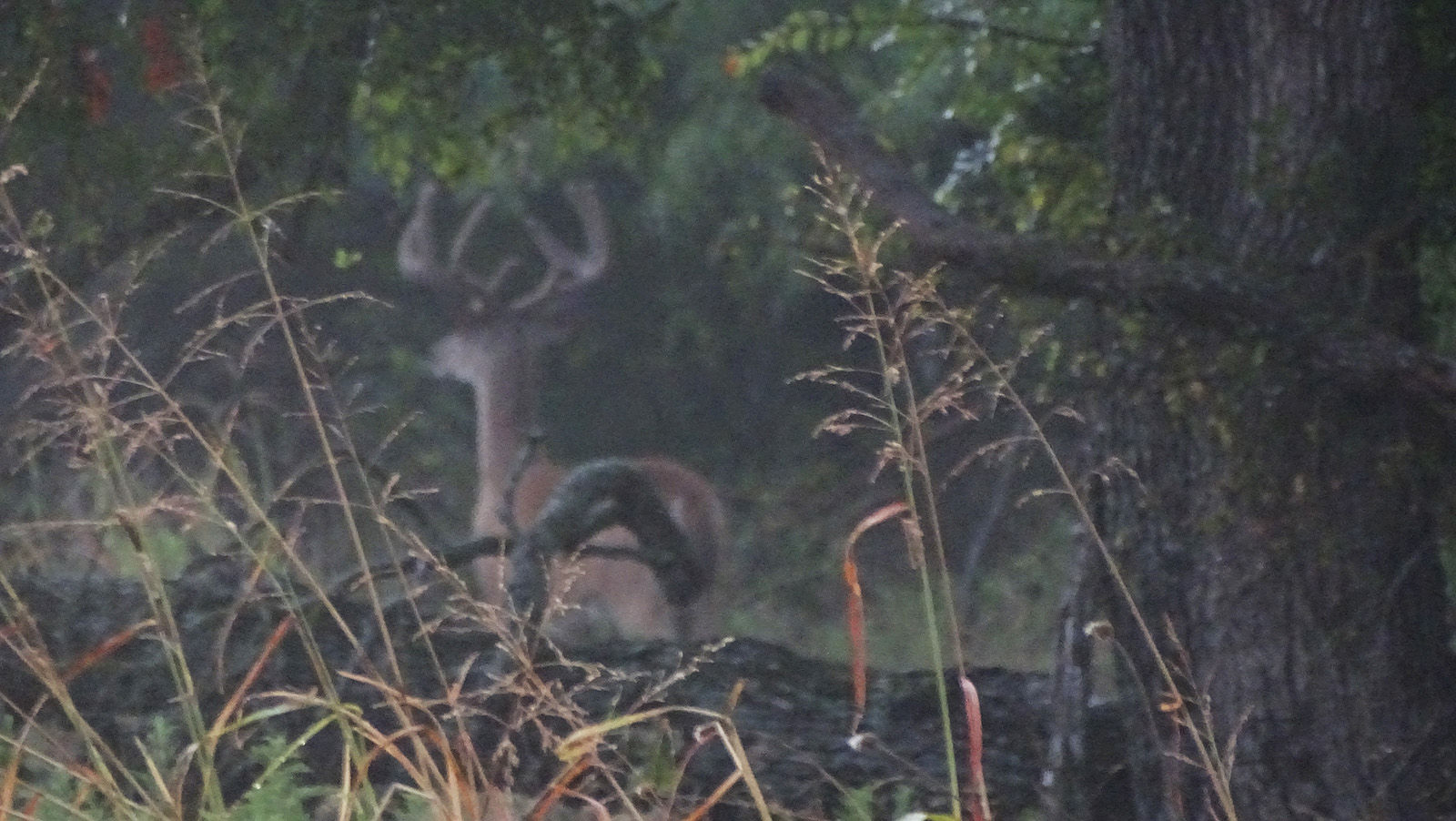 As sunlight improved I could see further into the woods. Two bucks strolled along  in the tall weeds as they walked straight away from my position. 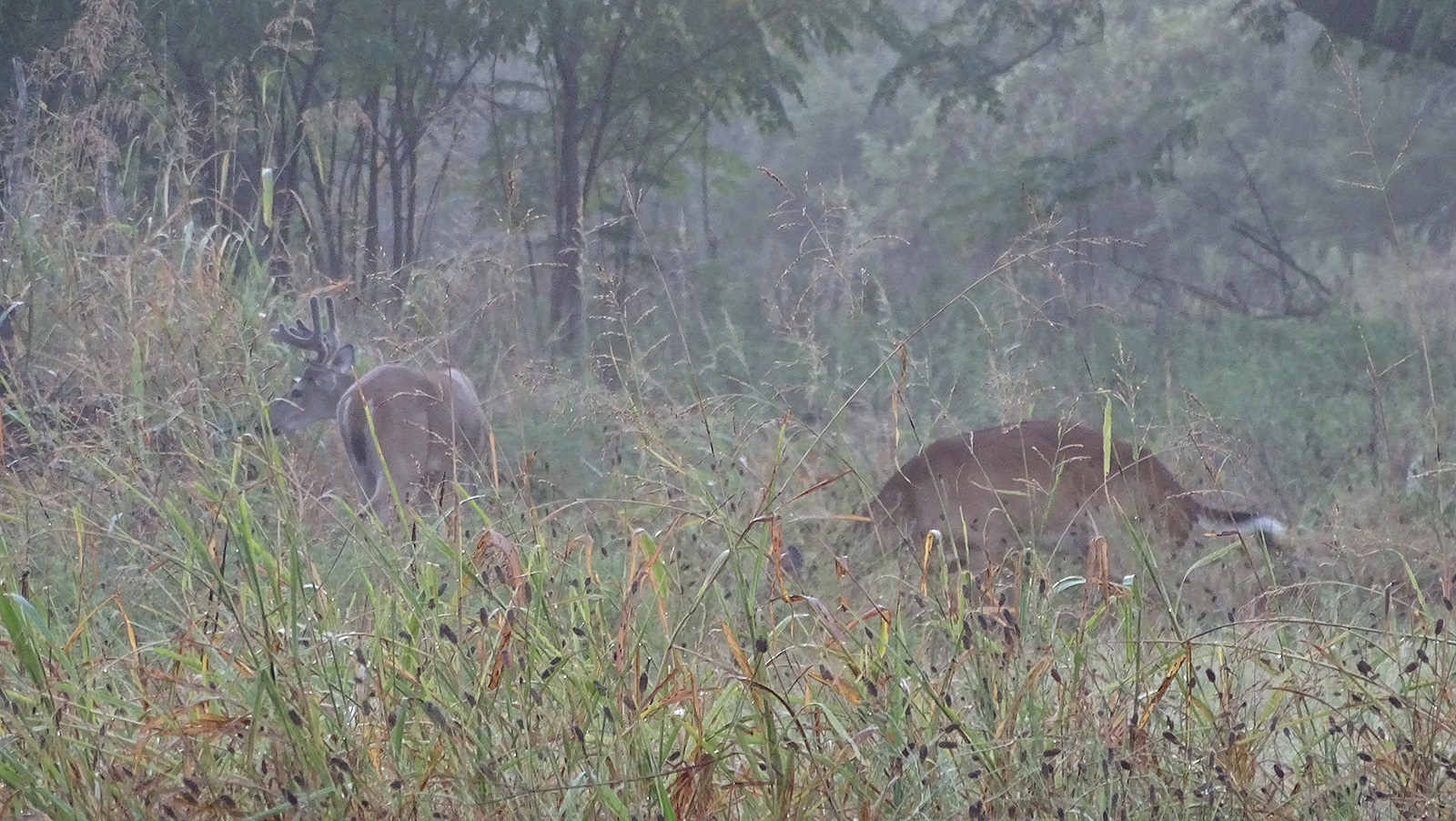 Five minutes afterward another buck came through the same area only these were walking perpendicular to my blind. 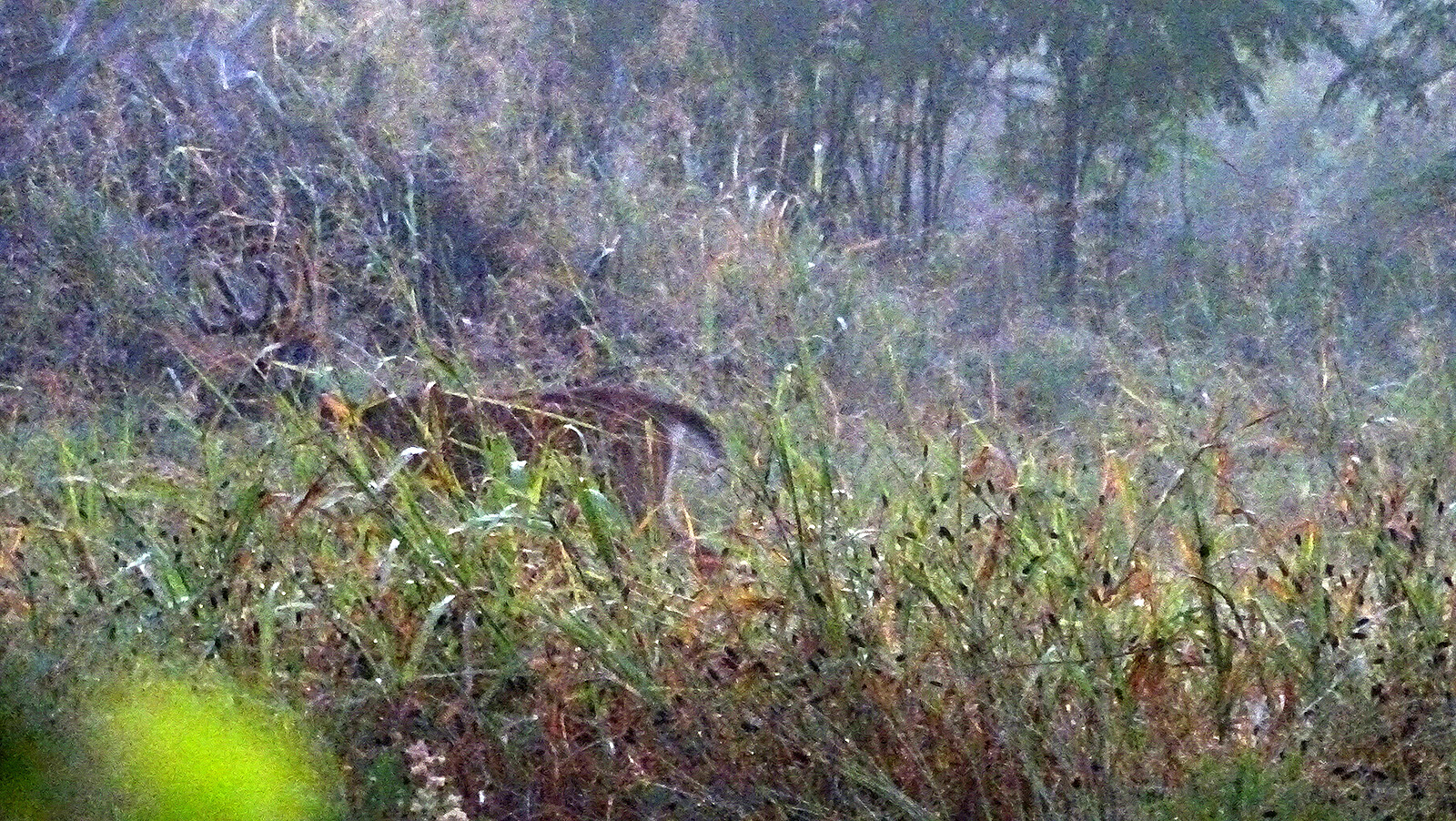 Fifteen minutes later a buck came up from the back side of my blind and walked passed by me. When he got to the Duck’s custom protein pellet dispenser he investigated it carefully. I investigated him, a lean 10-point buck, probably a 3 1/2 year old.

This buck has very typical antler shape for this area except for those extra points on the end of his main beams. Around here, people say that this is “8-point land.” He poked his nose in the top of the container and I think he actually ate some of the pellets. However, I was looking around the place to see if any more deer were in view and I didn’t get on him quick enough to take a picture. And, frankly when I’ve set out deer protein pellets in the past they deer have been slow to take to it and I honestly didn’t expect him to eat any of it yet.

Next thing, he was on his way to a finger of my small food plot, whic is the greener strip you can see in the picture below. 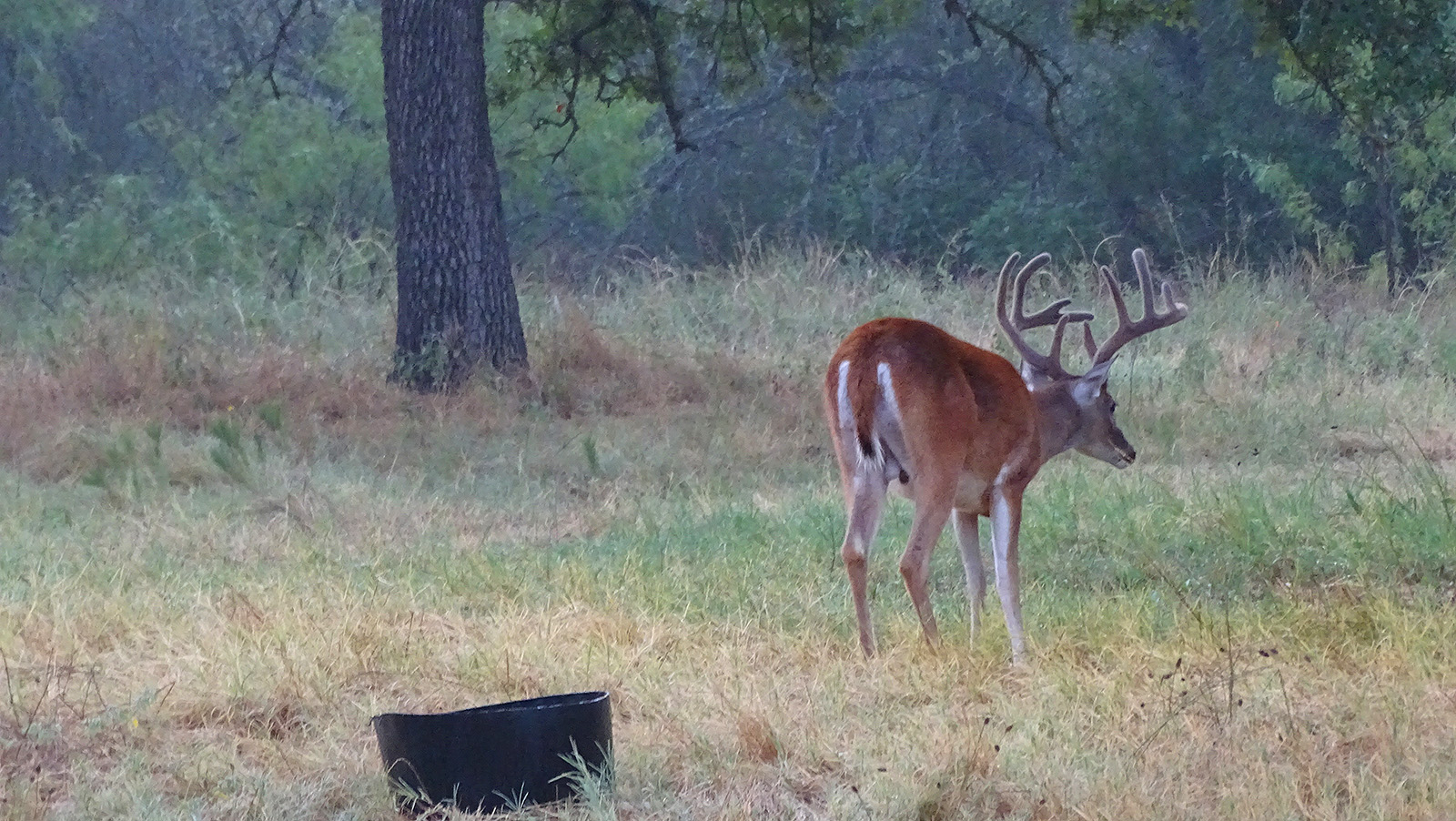 He was definitely interested in the only one-day sprouted magic peas. The ten point browsed around. Here he is at the edge that’s closest to me. 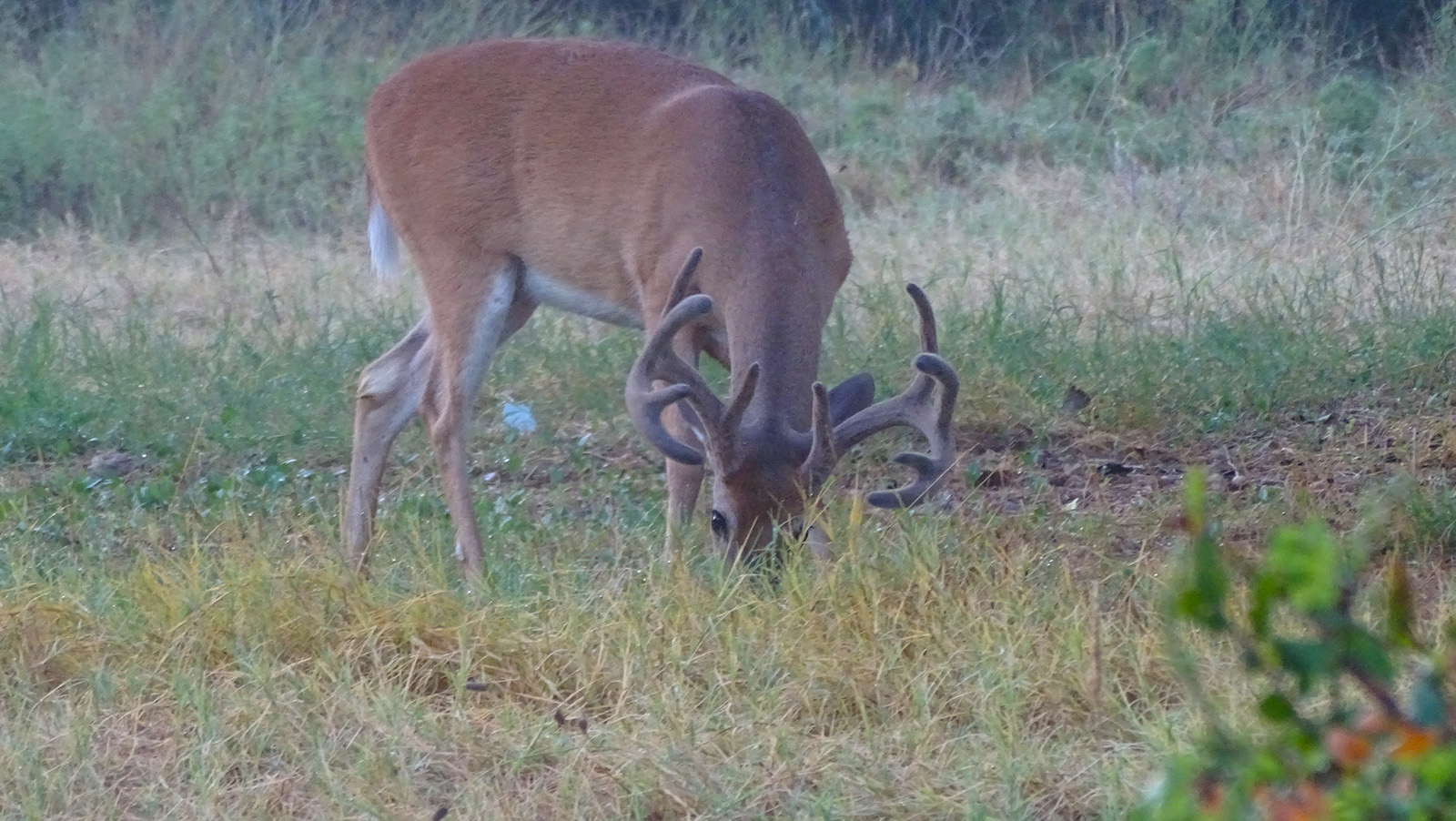 In July people are quick to mention that the bucks here are thin-necked and skinny. While that is true it doesn’t take into consideration that June thru September our weather is earning its reputation for “high heat.” Also, deer in this southern area have much shorter body hair than deer up north. In a couple of months the bucks will be getting their slightly longer fall coats and will quickly put on body weight. Heck, maybe this deer pellet deal will help with that.

When the 10-point had his way with the pea leaves he walked straight toward my blind and passed me only 15 yards away. 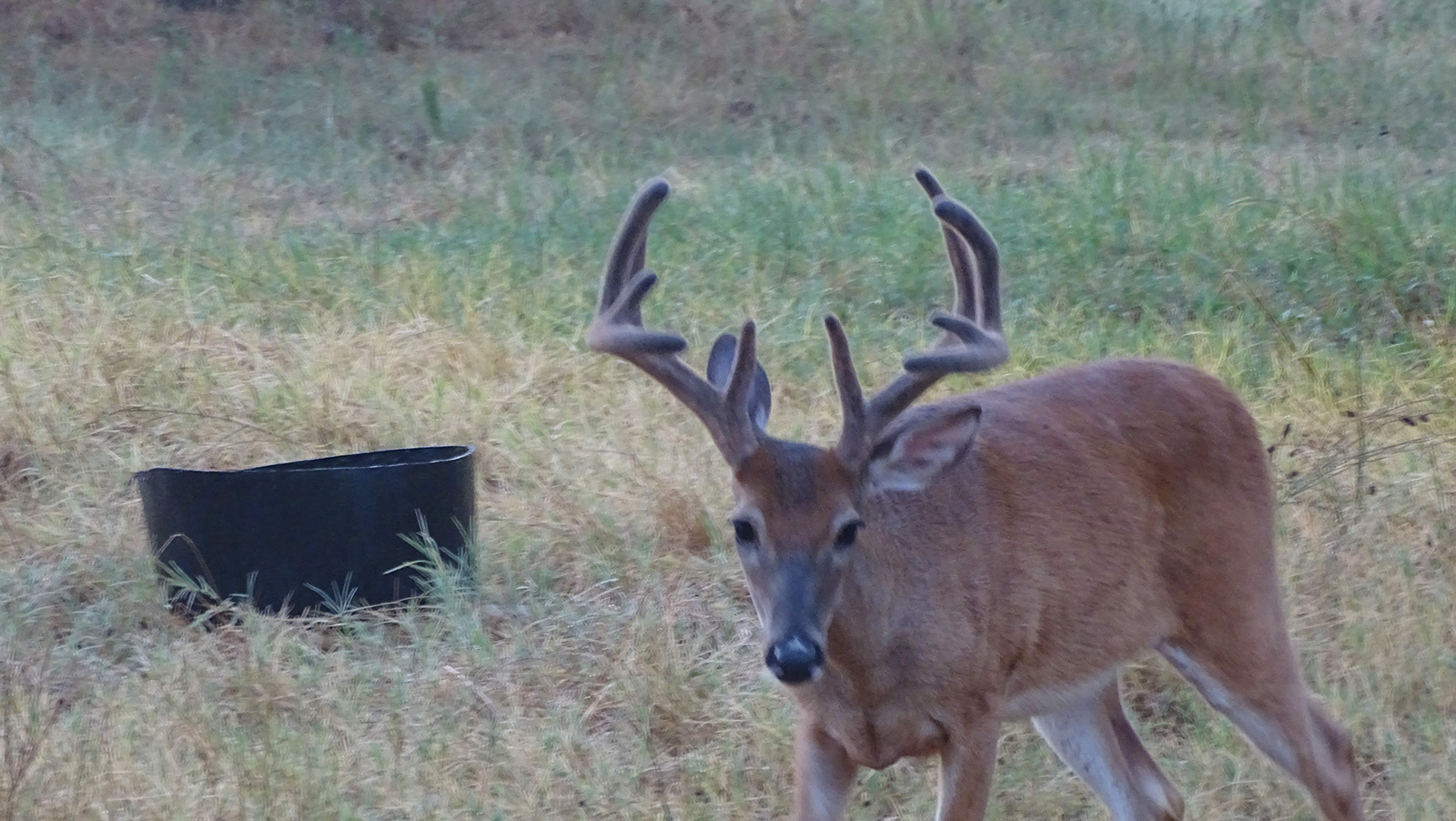 So he was the only deer to visit my brand new food plot but there were other deer in the area. Besides the four additional bucks that I took pictures of (above) I got a pic of two more bucks in the woods to the north. The second buck is partially hidden by the tree on the left. 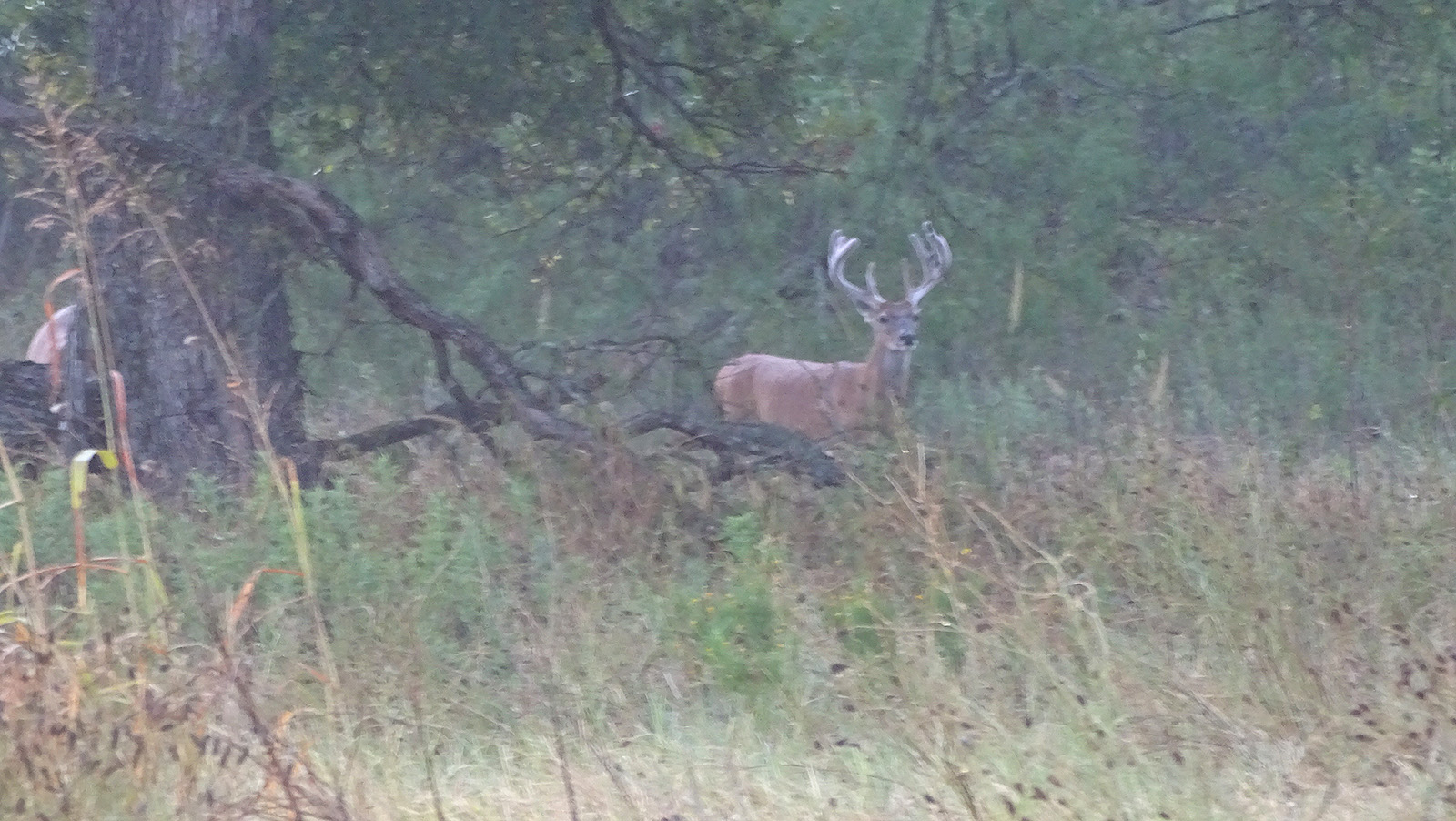 I’m thinking 2016 is gonna be an interesting year, deer wise. Hang with me and we’ll see what’s hanging with us the days pass until October.

Do You Know This Bowhunter?