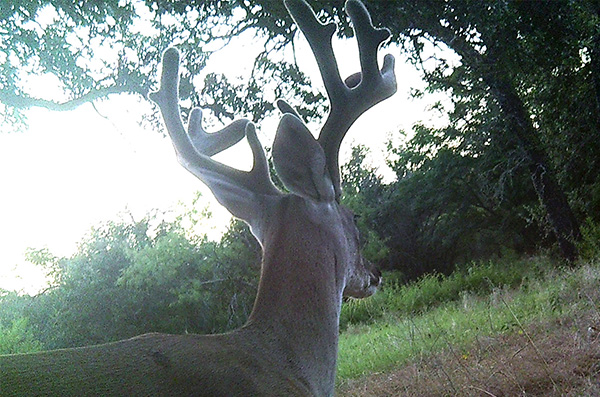 June and July are very dynamic months in the world of whitetail deer. It is a time of change for both the does and bucks, as well as the newborn fawns that comne into the deer world during these two months.
Around here, a few of the does dropped fawns in April and even more were born in May. And June and July were both big months, fawn wise. After the birth of their 2016 fawns the does shift into their nurturing mode and begin teaching their new 2016 fawns what to do and what not to do. They use the extremely effective, non verbal “teach by example” method that has worked well since the origin of doe deer.

I selected some pictures that are representative of the timeline of the events during June and July. The first buck I got a game camera picture of was at the H2O water seep. It was taken on june 5th. The picture below as well as the one below that are good examples about what is right and what is wrong with game camera pictures. The “right’ is that we got a picture of this buck when he walked through the camera’s trigger area. 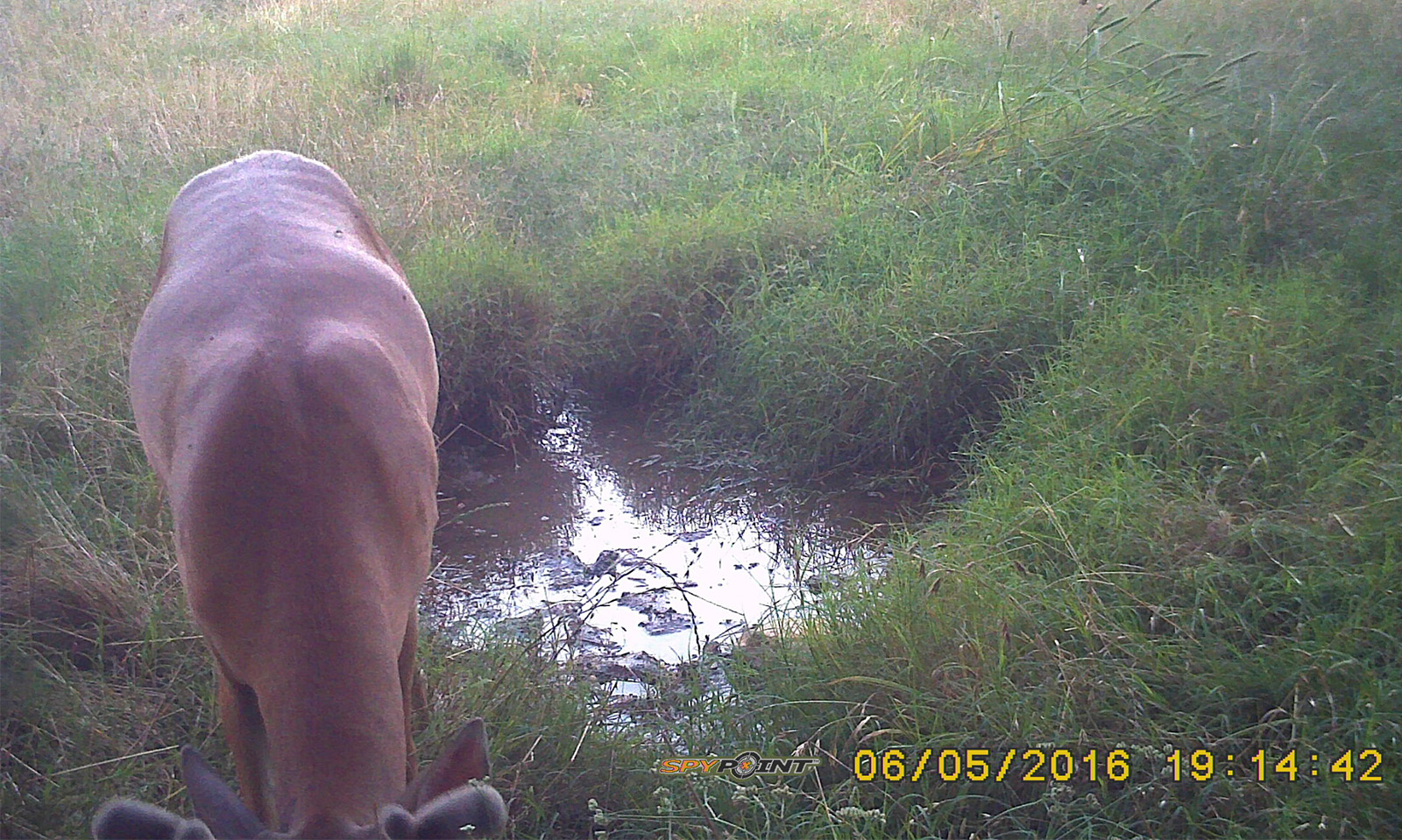 The “wrong” part is that both of the pictures, taken a day apart, do not show much about the buck’s antlers. And I’m sure, that if you use a game camera(s) you also get plenty of pictures that are lacking. It’s just the game camera thing. 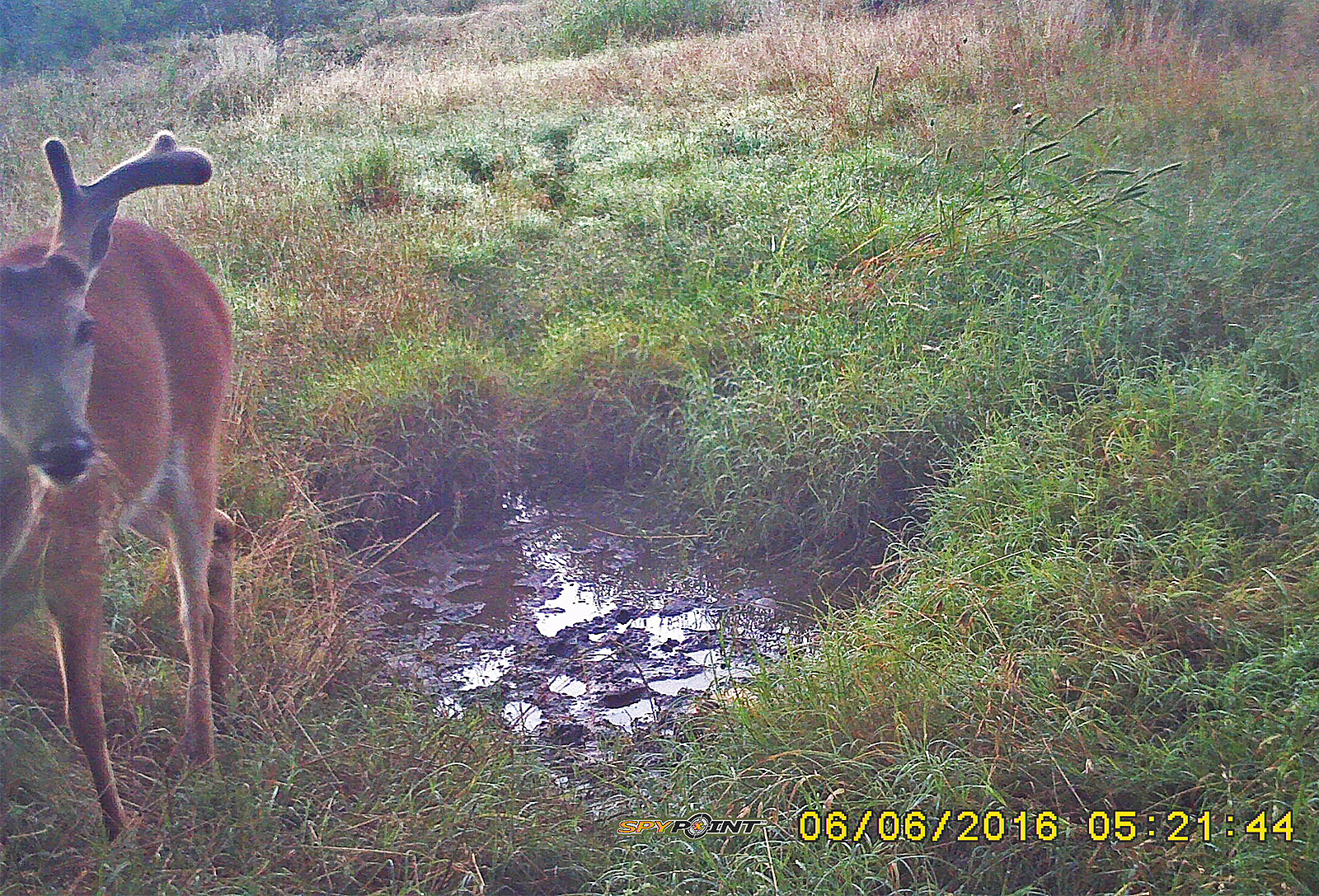 The rest of the month there were no more buck pictures, only doe pictures. And on June 30 the H2O camera took a picture of a doe and a small fawn. 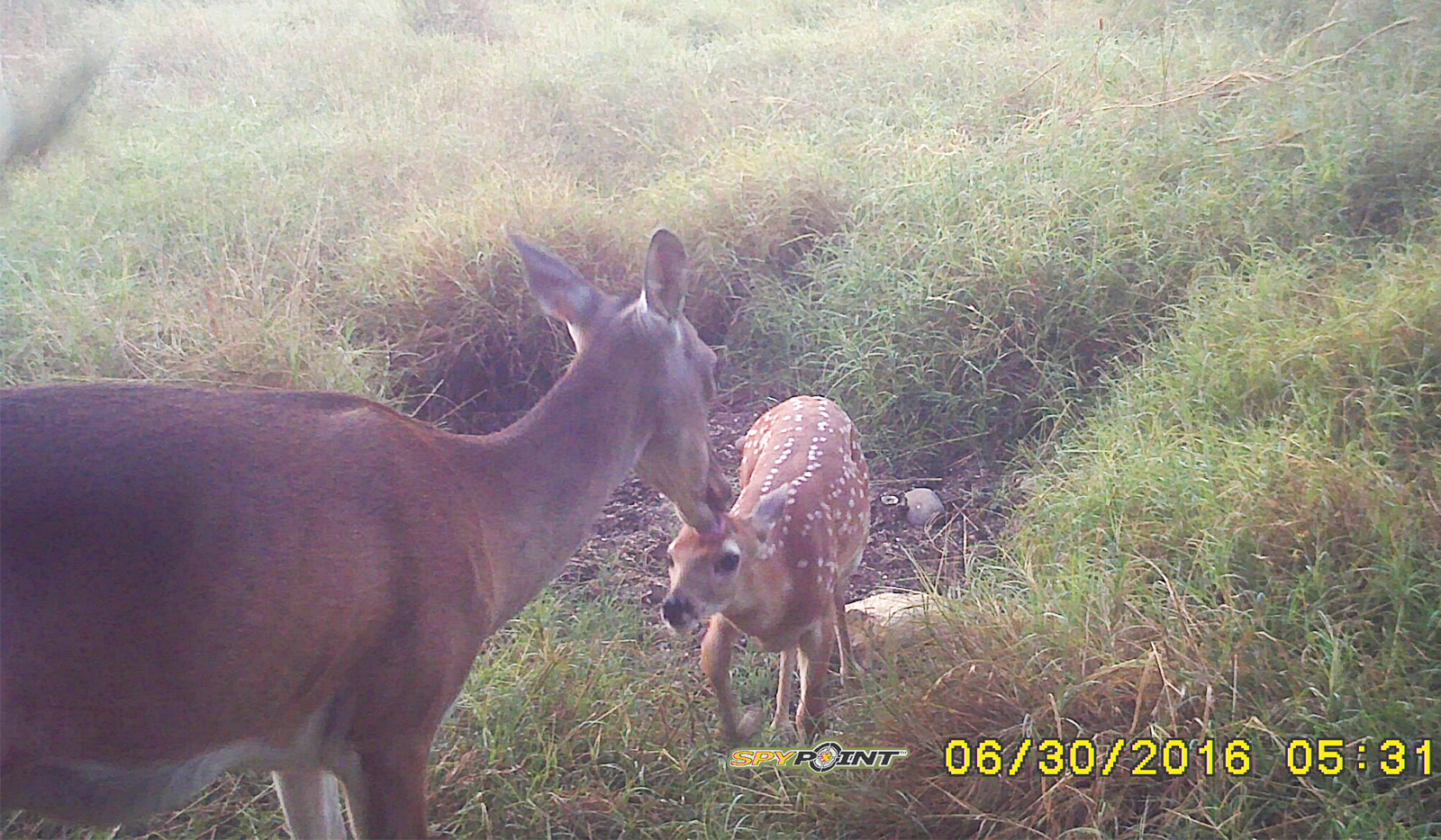 A month and 5 days after getting our first buck picture another game camera in a different area took a picture of a buck. Remember, this is July 11 and this “growing boy” is definitely looking good. 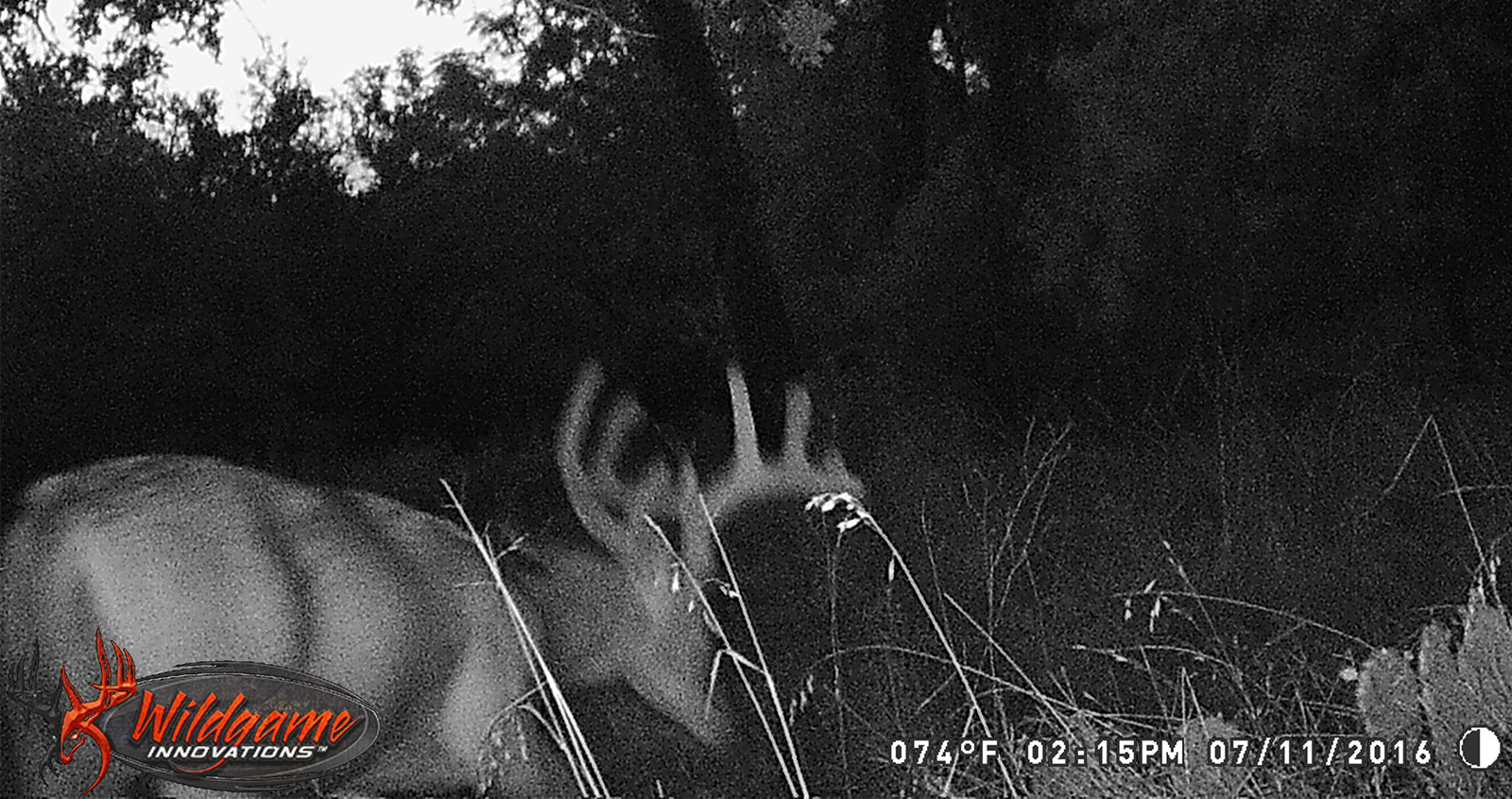 Two days later we scored a picture of a buck with at least 3 kickers. He’s a “growing boy” too and he also has a ways to go. 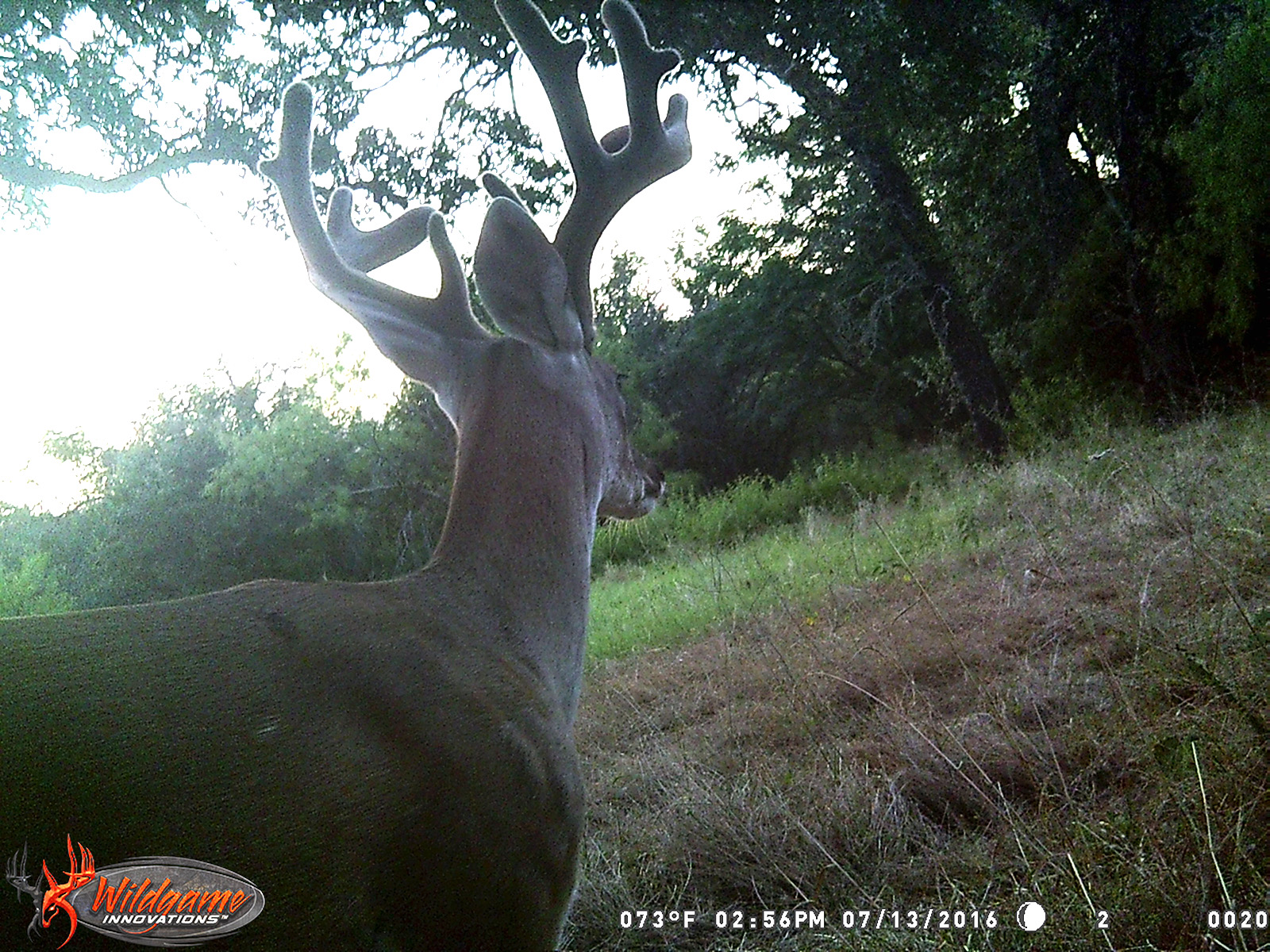 On July 17, in yet another area we game cameraed up another buck that’s shaping up. 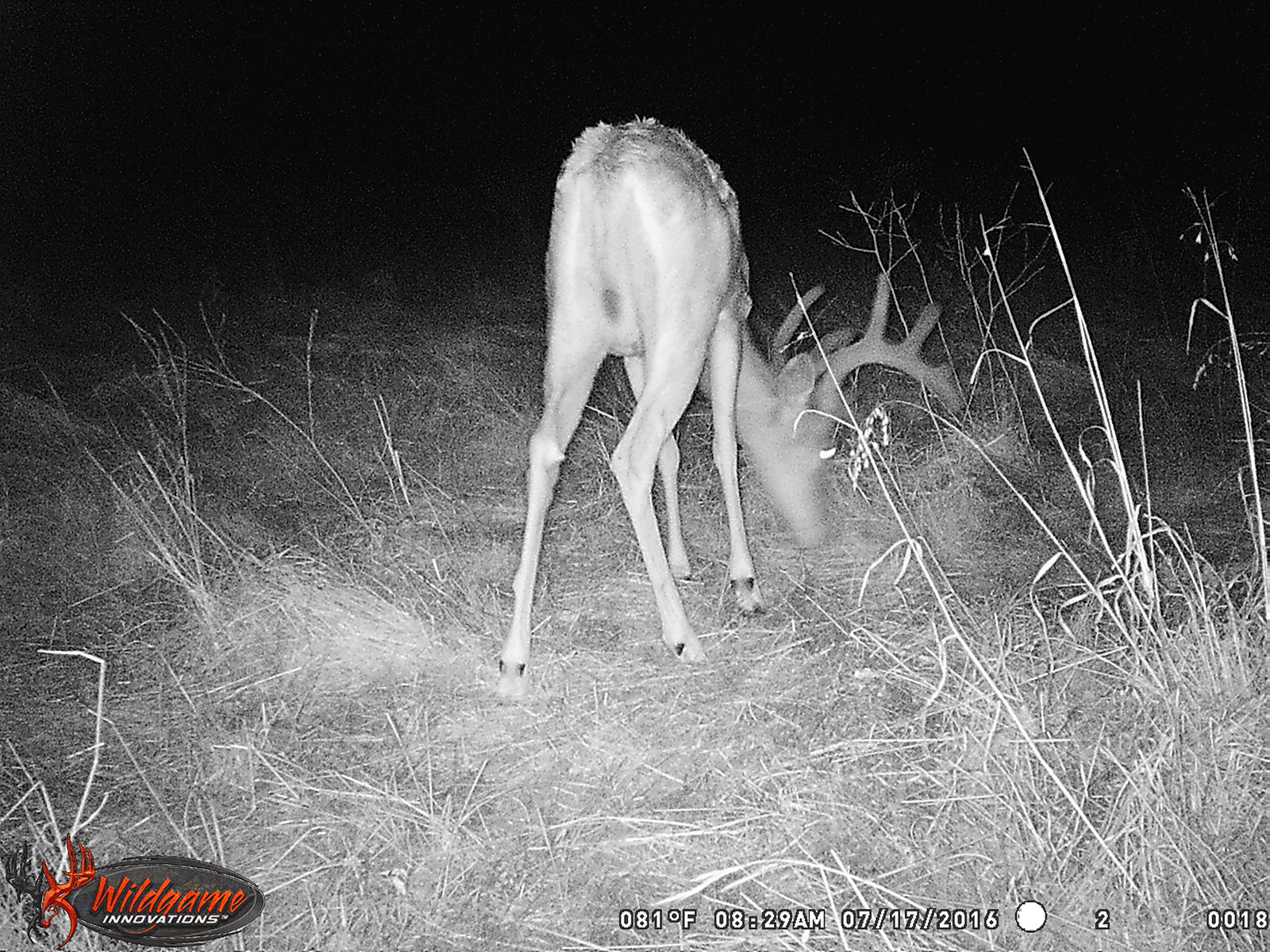 On July 19 we got a picture of two bucks near the place where I intend to plant a food plot. 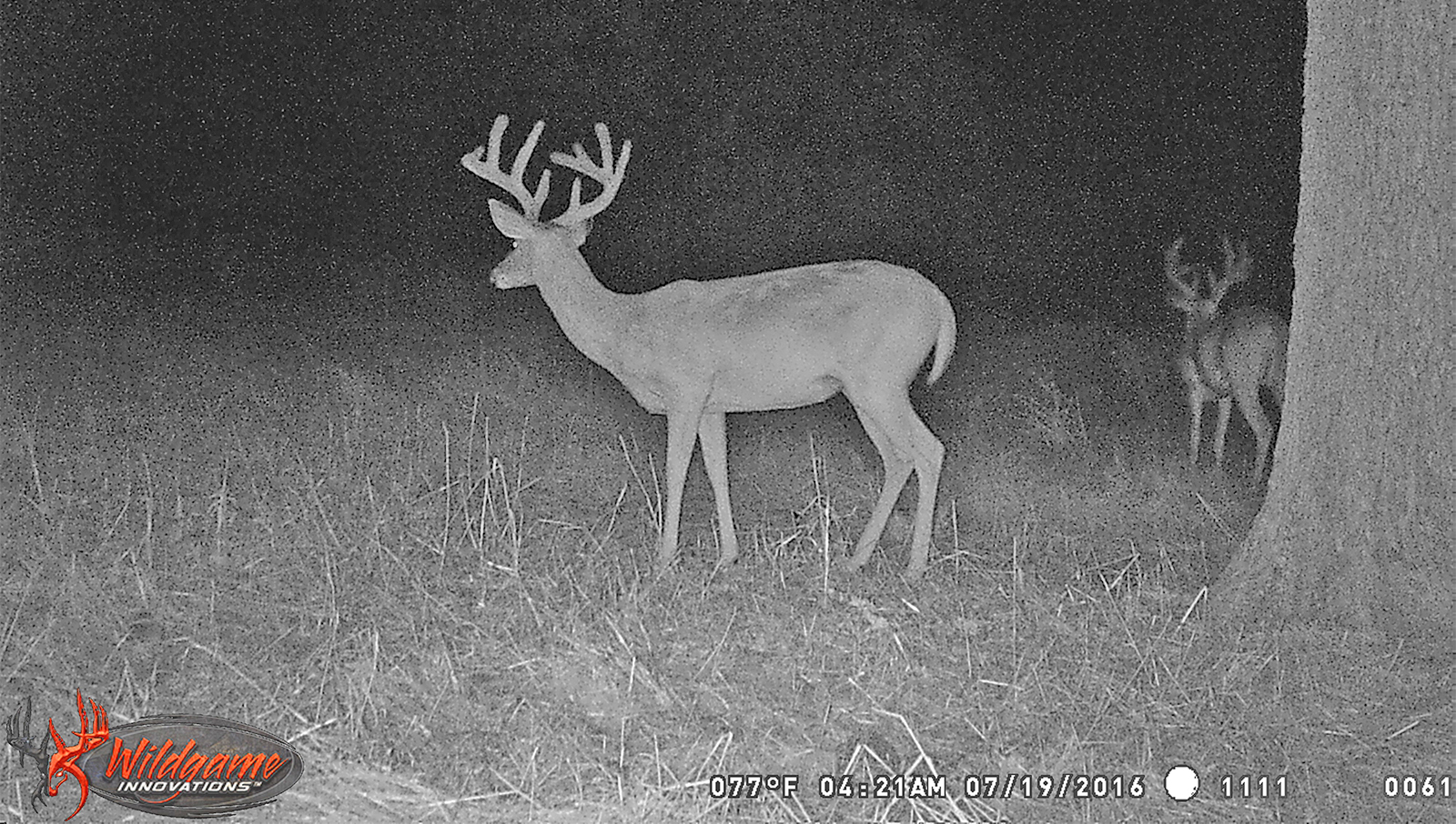 An hour later the same camera took a picture of two bucks. 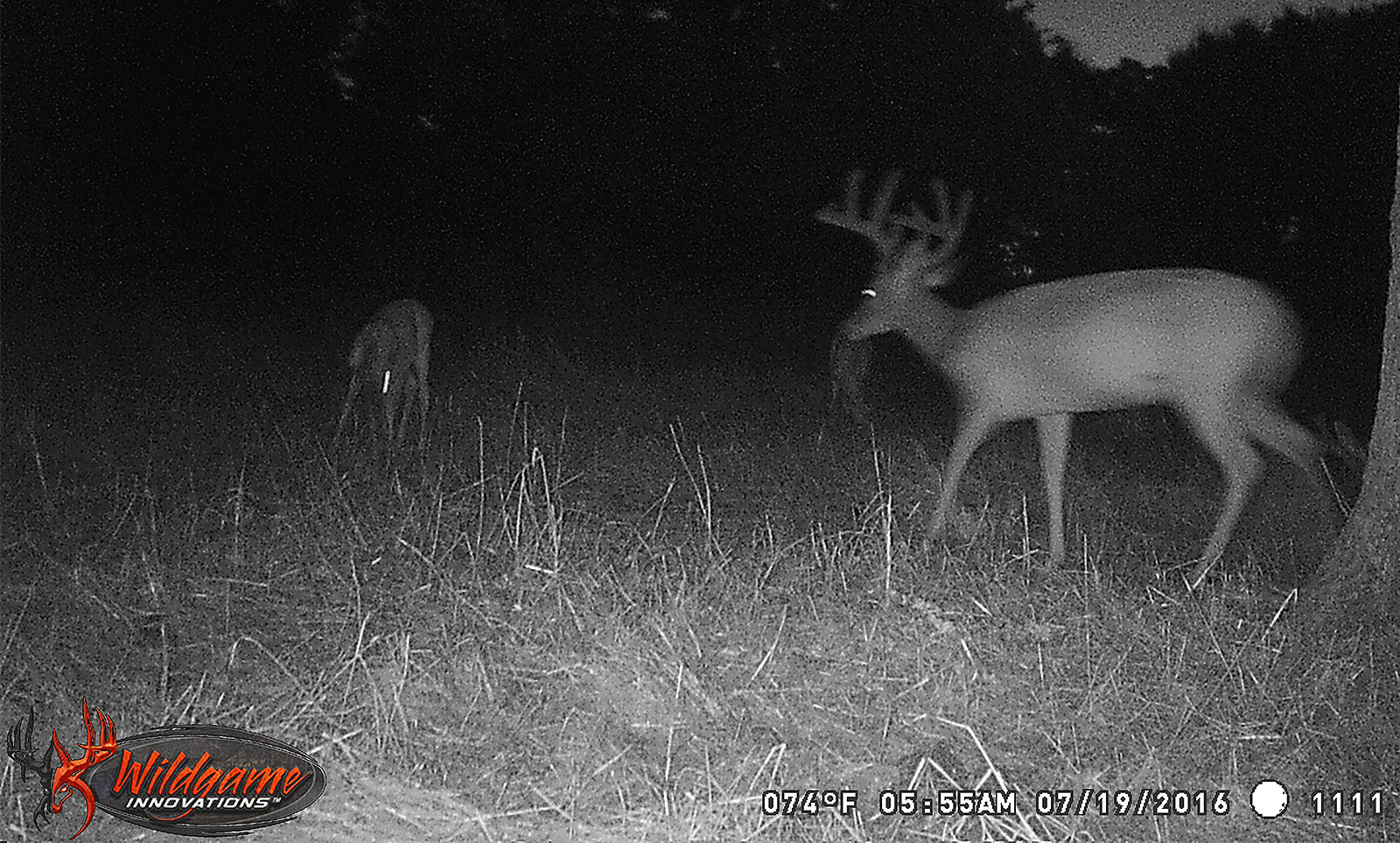 And back at the H2O seep the camera catches a doe drinking water. 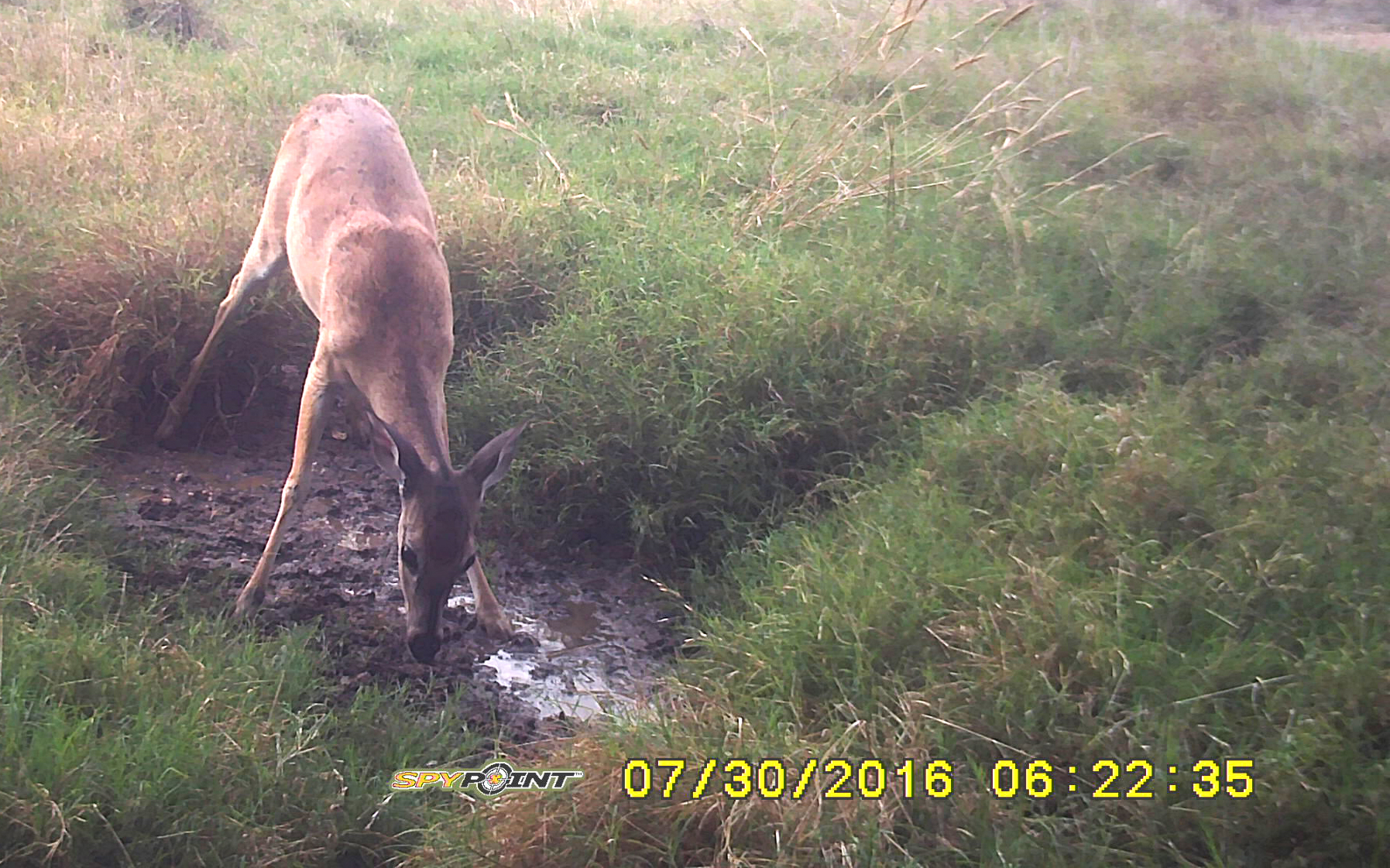 Here is our last picture for July, two does, and it looks like they are about to have an altercation. 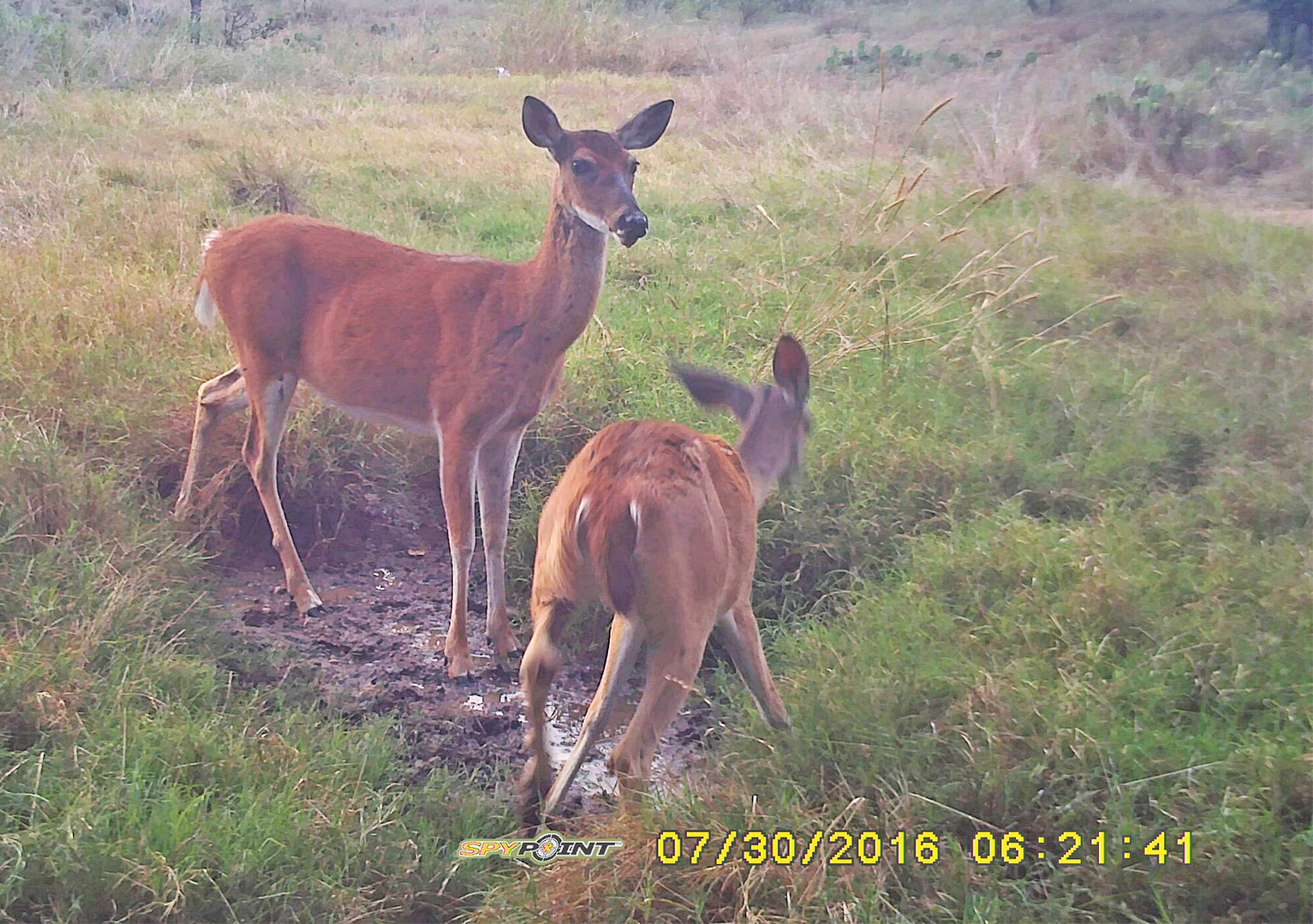 Back in June the only buck we got a picture of was in beginner mode in terms of antler growing. However, one month later you can see how much antler growth a buck can have in a month’s time.

August is also a good growth month. We will take a look at what came down in August next.

The Pros & Cons of Hunting with a Crossbow