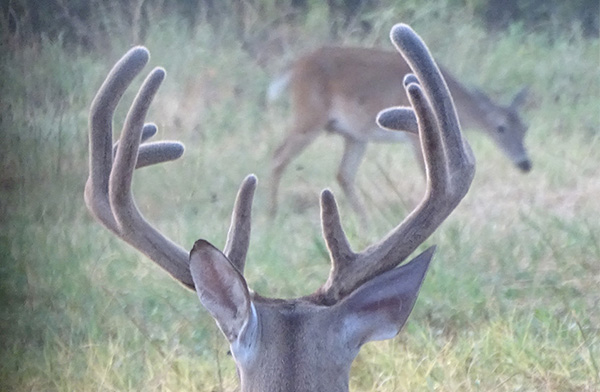 For the three days after July 17 I saw the same bucks in the morning but no deer at all in the afternoon. My goal was to see if additional bucks were in the area and get their pictures. The fourth morning I was back with my camera and things picked up. The early, beginning darkness turned to shadowy shapes and soon I could see a little bit. When I noticed the first shadowy deer figure walking through the trees I glassed it and saw antlers. He was moving slowly and stopping frequently to look around the area. I adjusted my camera’s settings until at last I could get a picture. He was a nice buck. 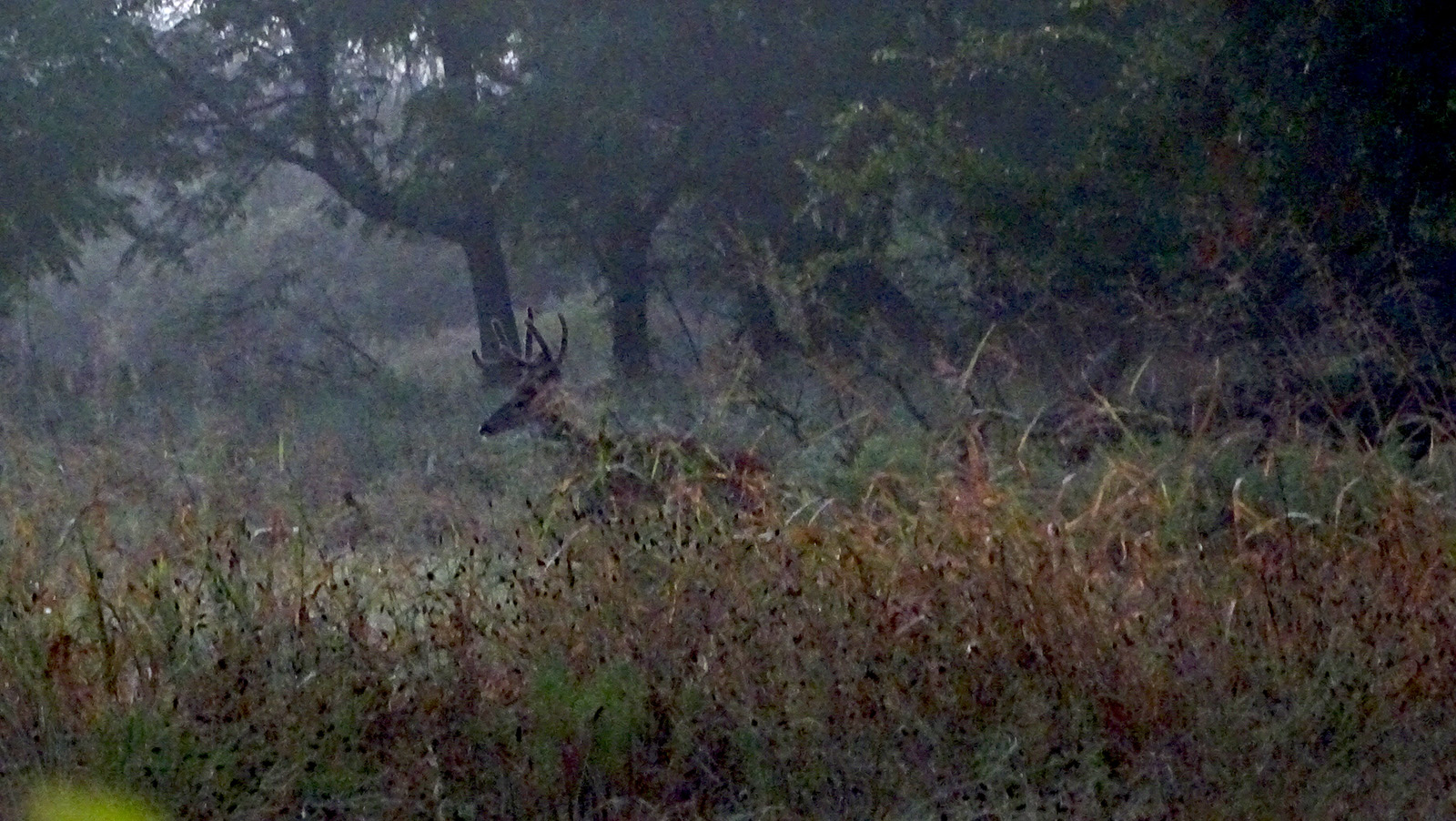 Woops! A shadow buck had moved in on me on the left side of the blind. I froze and waited in silence until I was certain he did not realize I was only ten yards from him. Carefully, I raised my camera and found him in the viewfinder and took his picture. 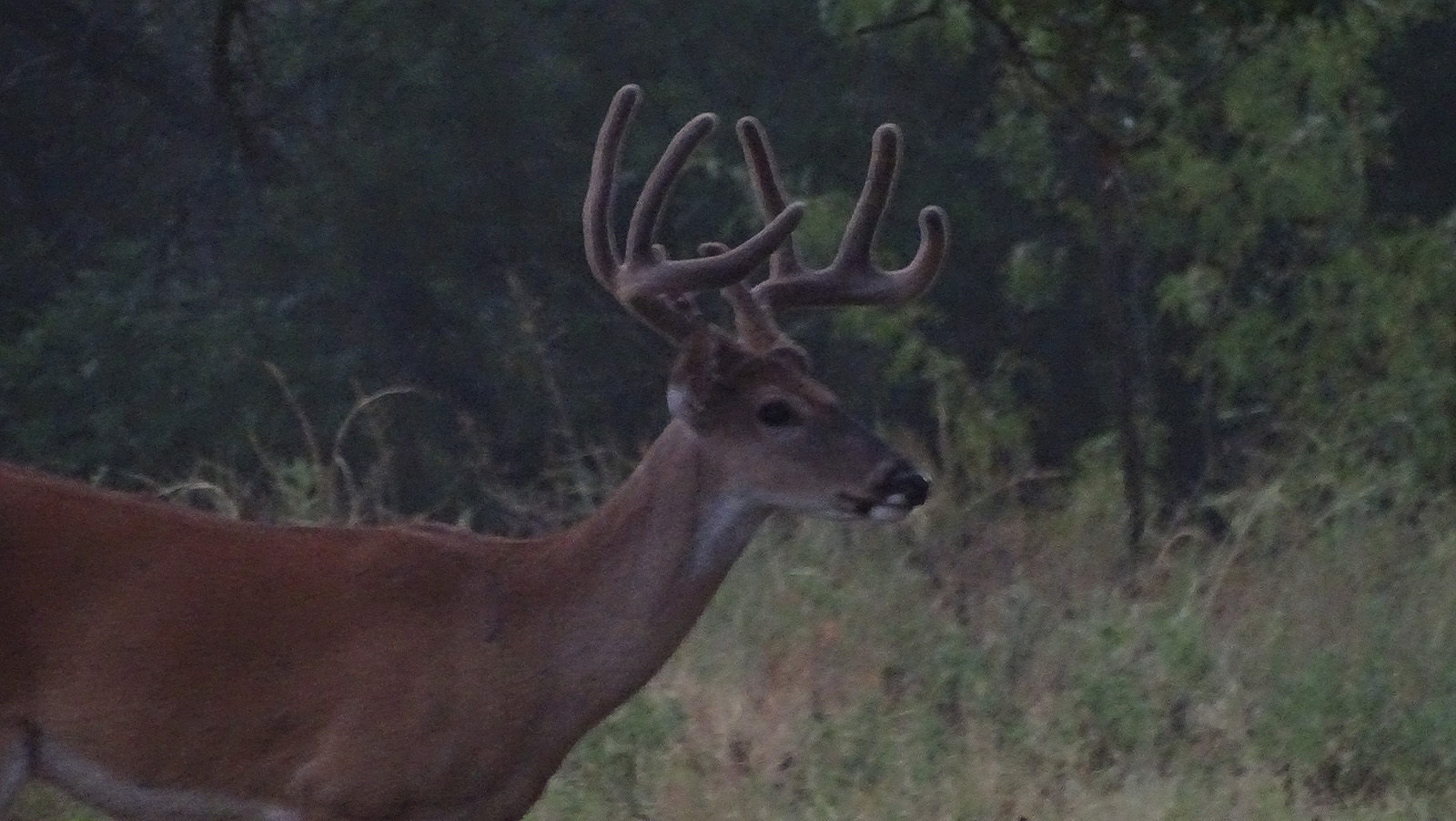 The buck continued on and I watched as he strolled into the new food plot and began browsing on the new green growth.

Next up was a buck in the woods to the north. He poked himself around a large, scraggly tree to look the area over. Two does were approaching the food plot from the opposite direction and the buck eyeballed them. His antlers were unusual. They were very light colored, not a usual occurrence for a buck in velvet. 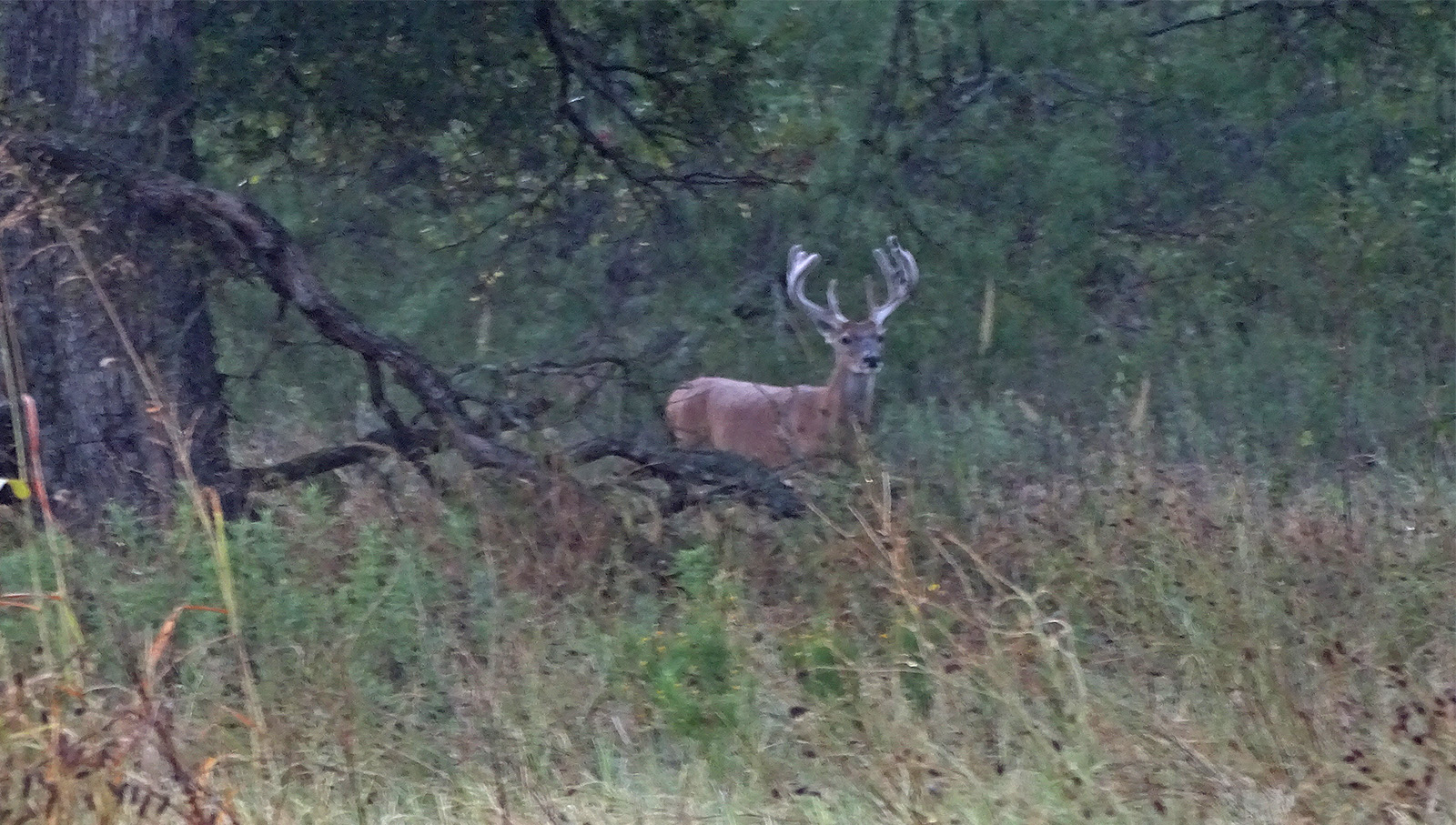 When he went on the move he cut across about 70 yards out in front from me. The does stopped and kept their eyes on him. So did I, he was a nice looking 10-pointer. 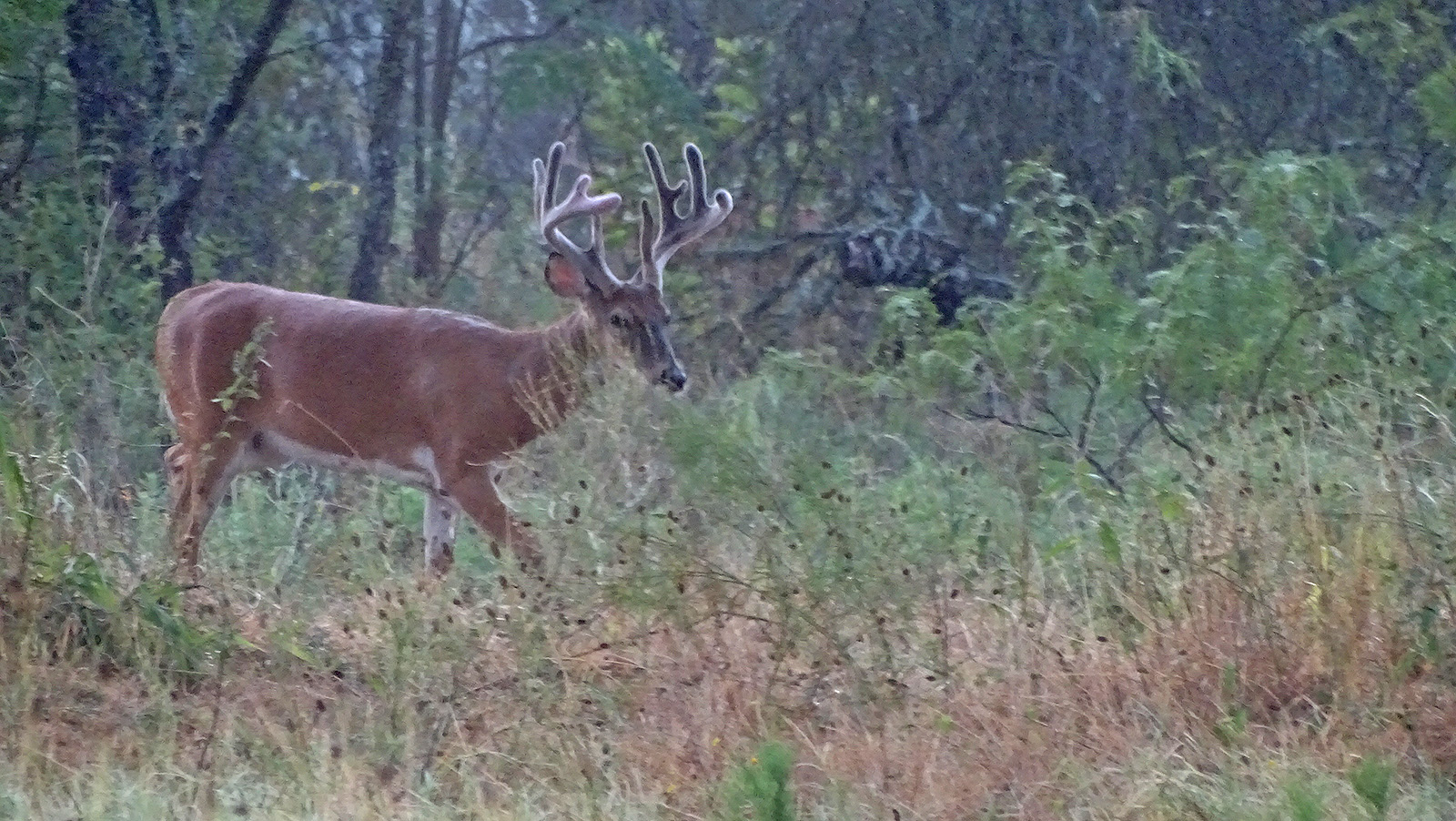 Both does went off to the east and the 10-point came a little closer and stopped to looked around, giving me a nice opportunity to take a looser picture. He continued on to the south and went out of sight. 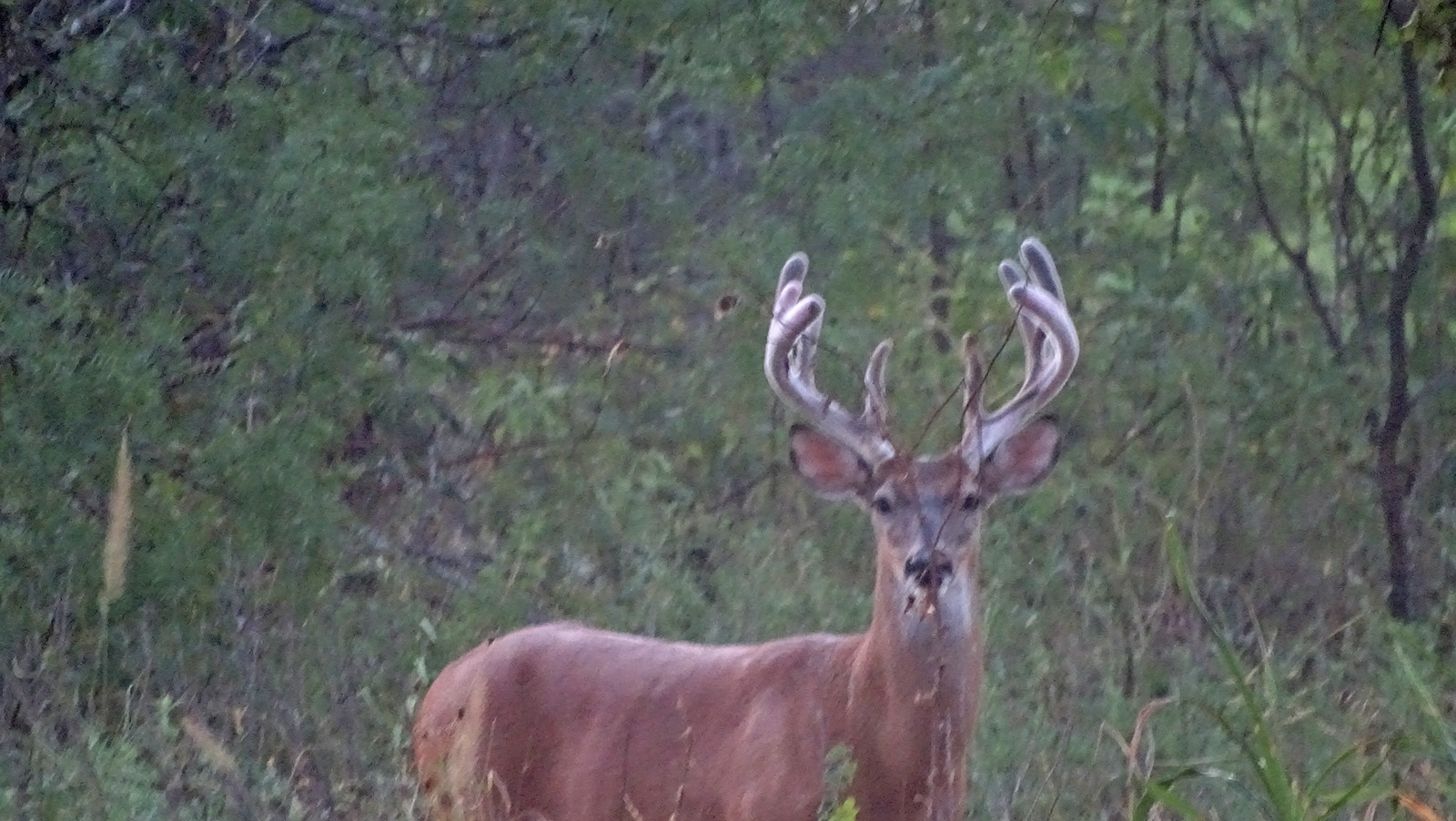 Two days ago I trimmed some limbs around my ground blind. They lay scattered on the ground and their leaves had quickly turned amber in color. When another 10-pointer came over to them I took a nice photo sequence of the buck treating himself to those amber leaves and succulent limb tips. He began by smelling the limbs and leaves. 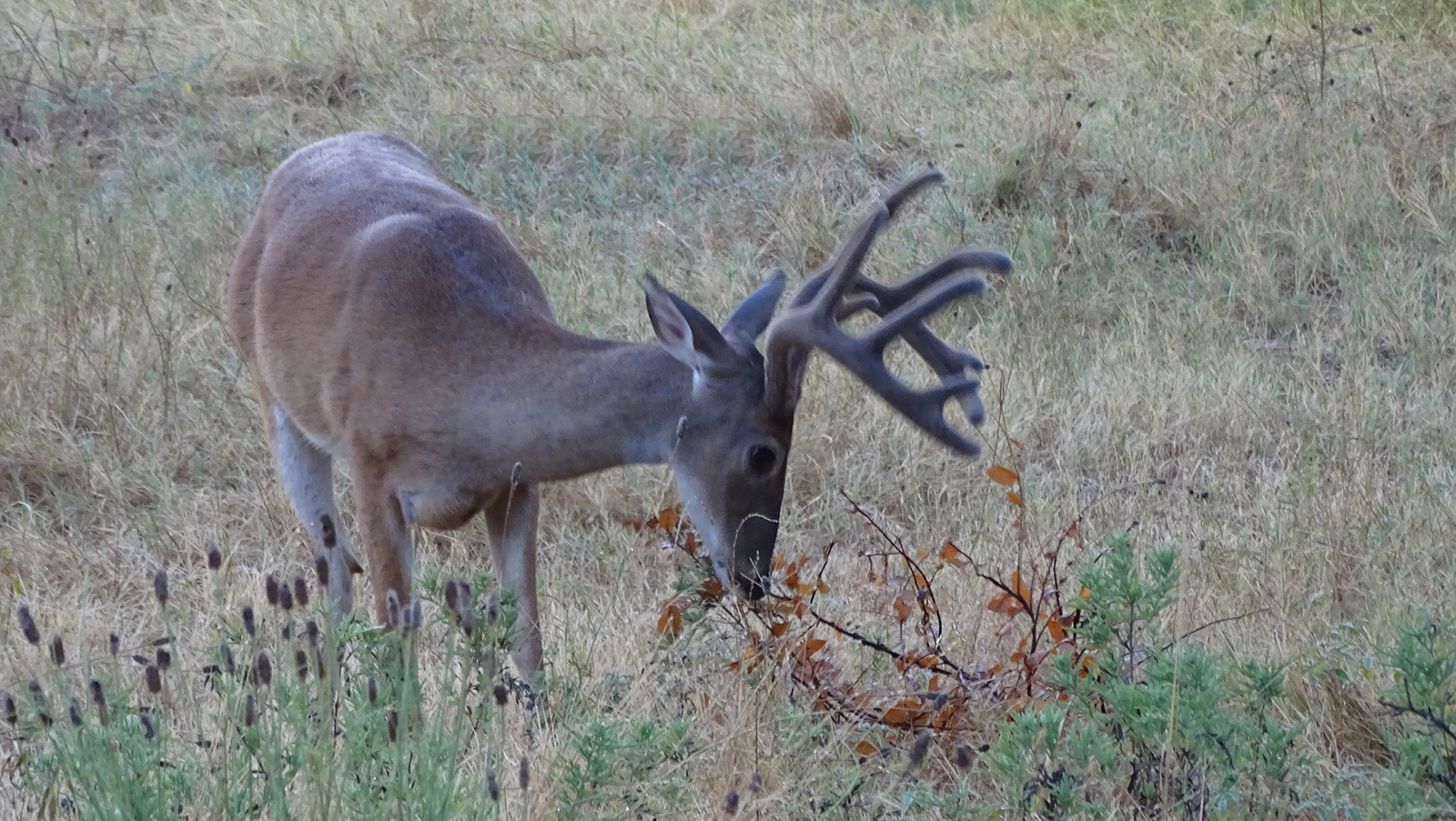 I zoomed in a bit and we can see the action better. 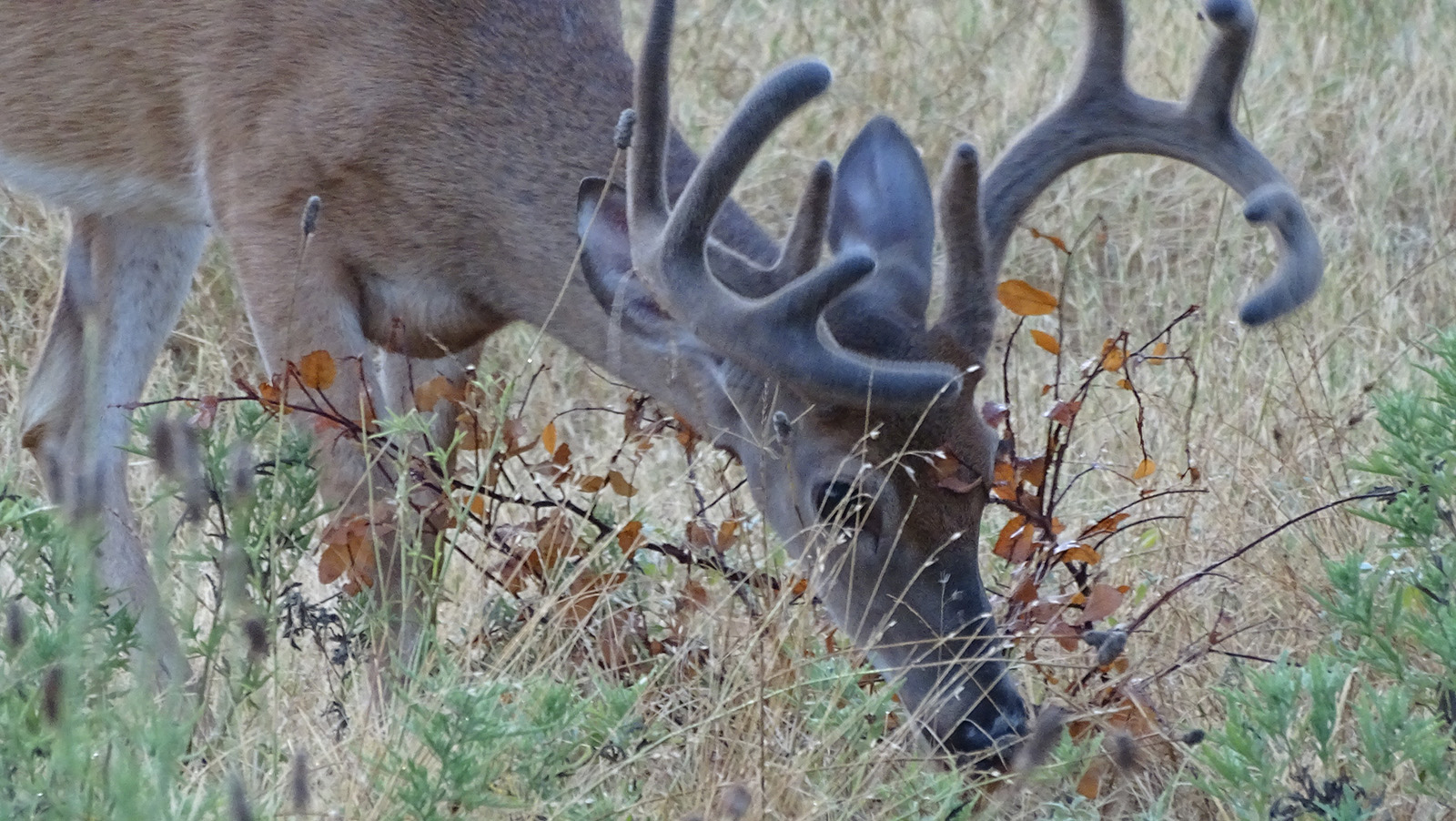 And here we are a dab closer. 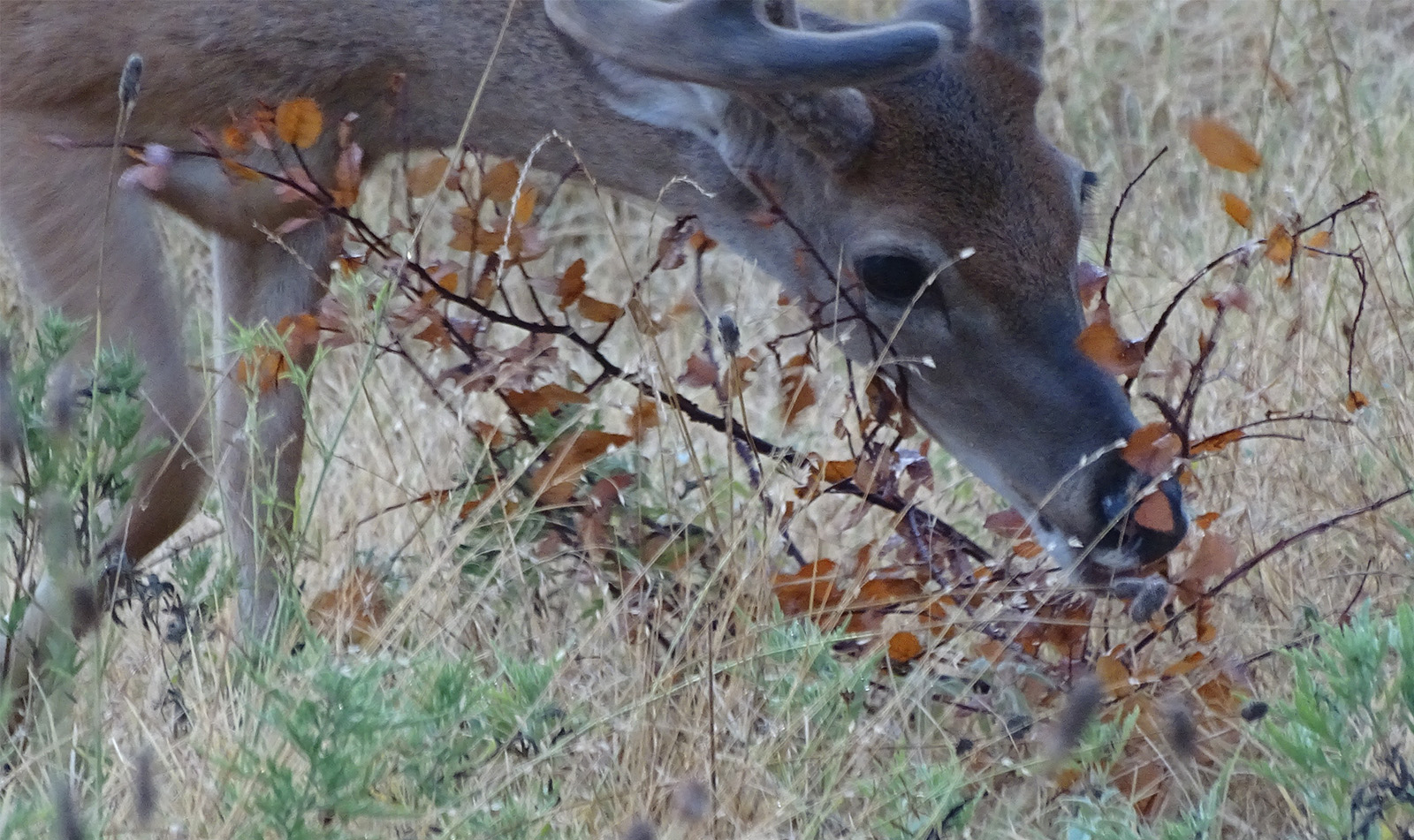 When he had completed his leafy snack he looked around in the direction of the food plot. 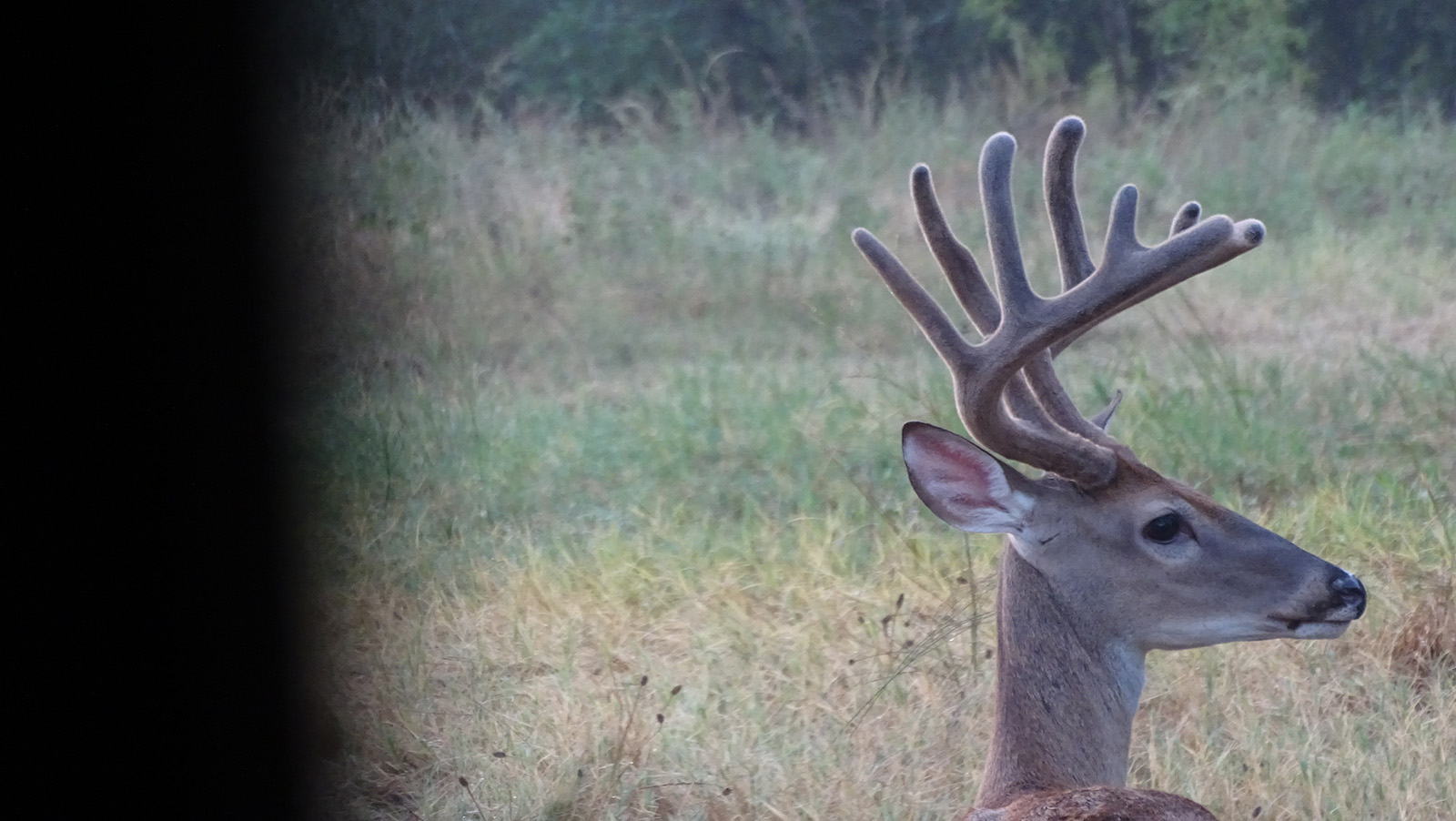 A doe walked into view from the left and I recognized an interesting photo opp and got the doe’s pic as it passed between the buck’s antlers. 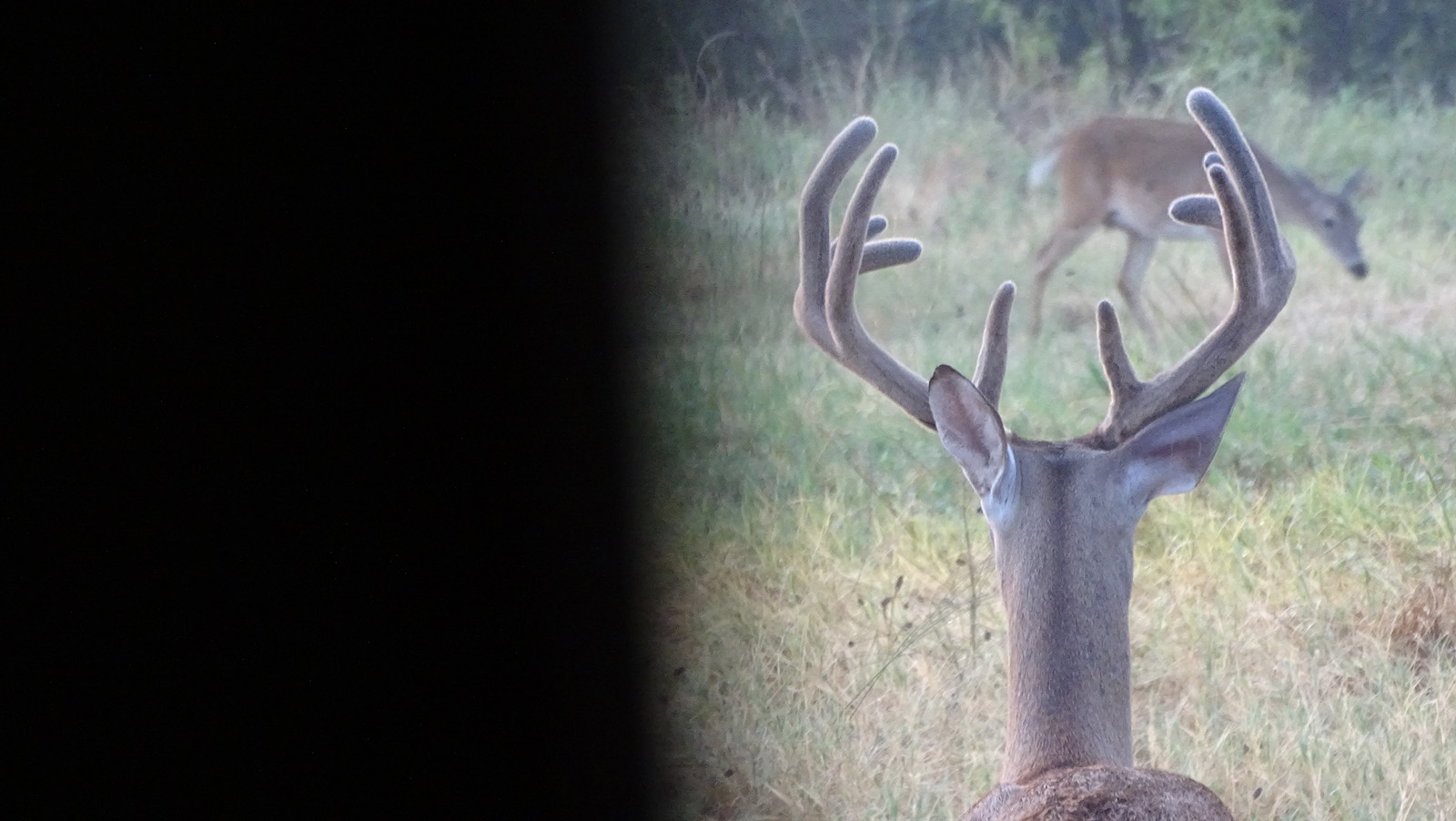 The morning wound up in short order. I waited half an hour to see is any other deer showed themselves. When they didn’t I returned home.