by Freddie Rowland
in Bowhunting Posts
0 0
A A
0 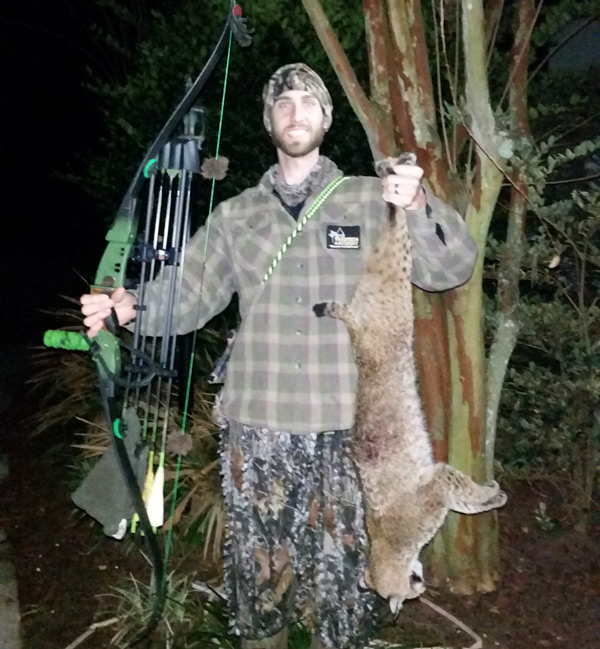 So yesterday afternoon, my son, Christopher Rowland, my daughter in law Stephanie and I were all hunting spaced out from each other on our lease with them taking a much needed break from the Bow Life office. Steph was on the south end of the property hunting the upland oaks and Chris and I were hunting the swamps to the north with Chris being about a quarter mile north of me.

As I entered the thick band that separates the woods from the swamps, I was looking at some large coyote tracks in the mud. Right before I stepped from the thick I noticed a flock of wild turkeys had flushed down the swamp from me and were flying away from my direction, high in the swamp canopy. I was certain I had not flushed them and went into stealth mode the rest of the way to my stand.  Usually if I bust a batch of turkeys in the swamps, they are far enough away to simply run off. No need to take flight. But these birds had been panicked by what I now believe was an attempted strike on them by a predator.

I slipped on down to my stand and eased about 25 feet up the tree but moved my stand around the tree to face north toward the direction Chris would be hunting. The creeks and wet swamp were to my right and the thick tangled brush and hardwoods were to my left. I was sitting right on the edge that separates the two terrains. There were no Squirrels barking and my area was way “too quiet” and not the norm. I could feel something was amiss.

After being up for about an hour or so, there were still no squirrels feeding on the ground and the ones I was seeing were staying in the trees acting sketchy.  A turkey flew down on the other side of the swamp and I called to her with my mouth just to see if she would respond but even though she answered my every call….she would not come in or cross the swamp to my side. I thought that was strange since I can almost always call in turkeys using natural mouth yelps or lost calls. But she just paced back and forth calling to me for about 30 minutes before several other wild turkeys on that side regrouped with her and they disappeared into the swamps.

Suddenly the squirrels in my area went on Red Alert and started barking like crazy. I watched their body language and it told me “predator”. I thought I could hear soft walking in the thick but could not see anything.  Squirrels will alert on deer and often tip us off to their approach but when it’s a deer…the squirrels usually just hang on the side of the tree looking in the direction of the approach which tells us where to expect to see it appear. But when it’s a predator, the squirrels will bark their alarm calls but they will also try and hide on the opposite side of the tree peaking around the tree to spot the intruder. THIS was the body language I was seeing but while I was hoping for a deer and not a predator, I was ready for either.

I decided to text Chris since whatever had the squirrels upset was moving toward his direction. All three of us were on group text and here’s how the text conversations went.

Me: 4:52 Squirrels going off  (this means something is moving close by)

Me: 5:01 Squirrels going nuts between me and you Chris….moving your way.

(Twenty four minutes later, Chris responded back to me)
Chris: 5:25 It was a Big Bobcat

Steph: 5:35 Got a big single doe out front…big ole belly on her!

Chris:5:36 I’m pumped! It’s an awesome animal with any bow but my first with traditional gear. He was hunting squirrels, looks nice sized. Can’t wait to get my hands on him!
Baby stay focused…that buck will walk right in (Chris Responding to Steph’s comment about the doe)

The hunt ended and the second deer never stepped out for Steph to see. I only saw the turkeys and squirrels. Chris made an excellent shot on the cat as she was slipping through with his Trad Tech recurve bow shooting instinctive…no sights. He drew and squeaked with his mouth to stop the cat, releasing his string at the same time. The cat squatted and the Black Eagle Zombie Slayer arrow dropped her.

I knew this was probably a big female since I had shot the male with my bow at the end of last year in the same area.  The cats have wreaked havoc on our turkey population in the past few years not to mention the fawns and we are noticing a huge drop in the flock sizes.  We have limited ourselves to one Spring Gobbler apiece for the last two years now!  I saw three bobcats from my stands at three different locations this past season and could not get a shot at any of them.  Two were big male cats and I could not tell for sure about the third.

With these two cats out of the woods we will get a better survival rate for the fawn drop and spring hatch this year! Predators have really hurt our deer and turkey population this past year and now we have to start getting some of these coyotes and raccoons thinned down too.

Hopefully we will get a full body mount on this cat as it is definitely a trophy with traditional gear! Congrats to my boy on some fine shooting!