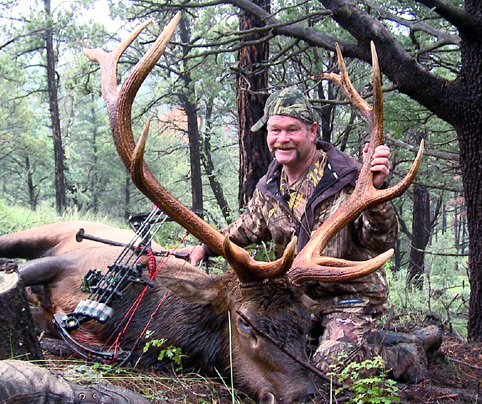 “Man… I love elk hunting. I live for it… When you get a big, screaming bull coming at you at 40 yards – one that you called in, it’s the most incredible feeling. My whole body is vibrating. It’s a feeling like no other.” Larry’s words were making my heart race, and we were simply having a conversation over the phone. I’ve never had a chance to hunt elk, although I have always wanted to I know there are many others who are full of questions like I was. We were talking about how to get started elk hunting, and here’s what I learned from Mr. Elk himself- Larry Woodward- host of ScentBlocker’s Most Wanted.

Larry explained that the first thing a hunter needs to do is set a goal. Are they out to simply kill an elk? Or a bull? Or a trophy bull? All of the answers to these questions will lead to the next decision- where to hunt? “Colorado’s got a lot of elk, and there are areas where they sell over-the-counter tags. Colorado is a great place to start elk hunting.” Woodward went on to elaborate that certain areas of Colorado are an elk hunters paradise, with a lot of animals. However, the combination of a lot of animals and an OTC tag system equals a lot of hunting pressure and not many trophy class bulls. “I like New Mexico for trophy bulls. My biggest there grossed 399 inches!”.

Most elk hunting is going to be done on public land. “When you hunt public land- you really make your own luck. You’ve got to dig deeper, hike further, and work harder that the other hunters.” Larry explained that on heavily pressured public lands most elk are driven out of the easy to reach places after the first few days of the season. “ I like to find the thickest, most rugged, nasty place on the property – away from trail heads, and roads and parking spots. That’s where I look for elk.” Basically, the advice here is simple to say- harder to do. Find a spot that elk will hide, get there before anyone else, and wait for the other hunters to populate the area with scared animals.

Most people have no idea how physical elk hunting really is. A fair number of these under prepared hunters end up wasting their hunt sitting around camp, complaining how sore they are after a few days. The reality is that elk hunting is grueling, with miles hiked and thousands of feet ascended. Plus, most elk hunting areas are at a much higher elevation than where the hunters are living, making the cardio workout even more difficult due to oxygen deprivation. “The best thing to do is work out all summer, and then get there early – like a week early.” Larry shared with me that research shows it takes the average hunter 5-7 days to acclimate to the new altitude and for their bodies to properly regulate their hemoglobin levels in the blood. “Most guys are just getting into shape as their hunt is ending… That’s no fun.” Larry’s advice here- also easier said than done- get in shape and show up early.

How to Hunt Them?

This tip in itself is one that people have written about for decades for beginners. Larry recommended hiking up nice and high before sunrise and listening for bugling bulls. If no bugles are heard, he starts by ripping out a few of his own on a call to see if he gets a response. If a bull bugles back, Larry keys in on him and tries to stalk closer. While stalking, he’ll also use a cow call to catch the bull’s interest and close the distance. In really high-pressured areas, it’s possible that no bulls will bugle back. At this point, Larry tries to use good old woodsmanship and think like an elk. He looks for fresh sign at water holes and trails and glasses feeding areas and valleys to locate the animals.

Another great strategy is to hunt with a buddy, and have a caller set up 50-100 yards behind the shooter. Similar to turkey hunting, the idea is to have the interested elk walk to the caller, and be ambushed by the shooter. Often these setups work, but both people need to be ready to move at a moments notice. Often the caller will have to move laterally to lure the elk into shooting range. Or, the stubborn elk may not be budging, and the shooter needs to sneak in to close the final distance. Either way, elk hunting in pairs is a great strategy. Plus… having someone to help pack out meat is priceless.

“Sometimes I look like Twinkerbell the ballerina in the elk woods… but I don’t care!” I laughed as I pictured what Larry was describing to me. Elk hunting is hard work, and to minimize sweat, Larry strips down to the least amount of clothes he can to begin the day. “It’s freezing out there, but I don’t care. I’m in my Mossy Oak S3 ScentBlocker base layers. It’s camo, and I have killed elk while just wearing this stuff.” Woodward starts as light as possible, and then when he locates a bull, it’s game on. When getting close to an animal, Larry and cameraman Josh then cover their skin and hair with ScentBlocker hair and skin deodorant, before putting on their Trinity gear and full face masks They then saturate themselves with Trinity Blast spray, and move in for the kill. “The winds and thermals out west are crazy… I’ve come too far to get winded. When I decide I’m going to kill a bull, I don’t want something like scent to get in my way.” He treats all of his elk hunting gear just his deer gear back home. In fact, many of Larry’s hunting clothes are used for both seasons. Everything is washed and stored properly, and most of it only sees the light of day during a hunt in the field.

“Once you shoot a bull- the real work begins.” Larry talked about how much effort it takes to properly care for game meat after the elk is killed. “But… I love every minute of it.” A few other pieces of advice from Larry were to make sure to be sighted in at a minimum of 70 yards with your bow, always know the property lines, tell someone where you are going, and be prepared to spend a night or two in the wilderness.

I learned a lot from talking with Larry and now want to elk hunt more than ever! If you get a chance to get out, have fun, be safe,  and shoot straight.  Lastly, don’t  forget to send us pictures:)