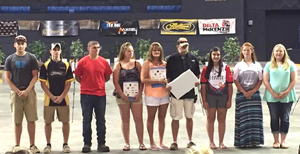 Scholastic 3-D Archery awarded the Trey Spencer Memorial Scholarship at the ASA Classic on August 6th. The awards were given to seven deserving students from across the country. The money for the scholarship was given to Scholastic 3-D Archery by the ASA and was generated from the participation of ASA members in the Long Shot Challenge throughout the season.
100% of the profits from that challenge went to fund the $10,000 in college scholarships.

Roger ‘Trey’ Spencer, 20, son of Roger ‘Buzz’ and Debbie Spencer, was born and raised in  Logansport, Indiana, along with his sister Marla. Trey was an avid outdoorsman who loved
hunting and fishing, as well as shooting 3-D archery. Trey worked alongside his dad to see that the Scholastic 3-D Archery program finally came to fruition in his local school even though he had
already moved on to college. Trey loved being able to travel with his dad and was proud to be part of the ASA Advisory Staff and family during the 2015 season. Trey died tragically on August 31, 2015 due to injuries suffered in a motorcycle accident while traveling home from college just one week after returning home from the Classic. The Trey Spencer Memorial Scholarship Fund was established in 2016.

The mission of the scholarship is to provide financial assistance to deserving individuals enrolling for undergraduate study in community colleges, colleges, and universities.

“What ASA’s President, Mike Tyrell has done on this effort is a game changer for college students,” said Jennie Richardson, Executive Director for Scholastic 3-D Archery. “These dollars can be applied to any facet of paying for college, from books and housing to travel or tuition. The four Seniors chosen have already signed with a University to continue in their sport. This will hopefully make their freshman year a little easier.”

Started in December 2012 by the Scholastic Archery Association, S3DA has grown exponentially as a next step program to follow introductory programs offered as part of 4-H or the National Archery in Schools Program. S3DA addresses the need for a program to bridge beginning target archery experience and more advanced activities such as 3-D shooting and bowhunting. The program currently operates across the United States with hundreds of certified coaches serving thousands of young archers, grades 3–12.

For more information please go to:  S3DA membership go to:  or email: S3DArchery@gmail.com