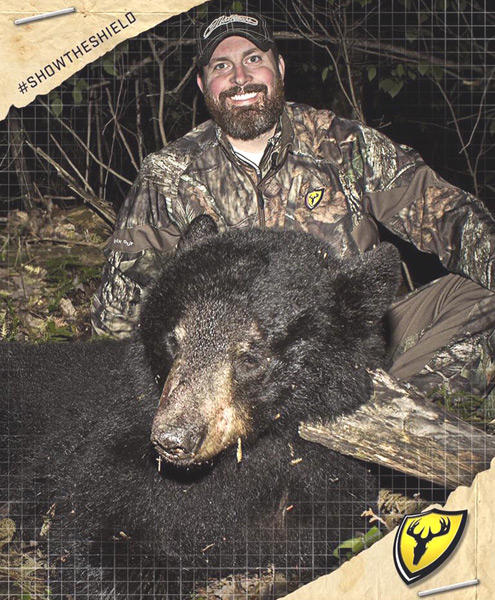 Author with his prized bruin.

Like most hunters, I have an endless desire to explore new ground and experience new and exciting pursuits.  Stepping off the plane in Minneapolis this spring was the start of a new pursuit for me – black bear hunting in Canada. My cameraman picked me up at the airport and we started the final leg of my journey to meet up with the ScentBlocker Most Wanted crew at Canoe Canada Outfitters in Atikokan, Ontario.  Bob Richardson and Larry Woodward had hunted this area with Canoe Canada for many years, but their experience with them was primarily during the fall bear season.  When Ontario opened up a spring bear season this year for the first time in 17 years, we jumped at the opportunity to get an early start to the 2016 season.

With the exception of a short delay at the border we arrived that evening into Atikokan with no major issues and ready to get the hunt started.  We missed that evening’s hunt, but I had a chance to get settled in and then shoot my Mathews No Cam to ensure there were no issues after the flight and drive into camp.  Bob and Larry had already been in camp for a few days so we had a chance to catch up and talk through what they had been seeing on the Cuddeback’s as well as what I could expect.  This being my first bear hunt, I was absorbing any knowledge and information they shared from their experiences over the years.

Just like every other hunt I had been on the last two years, it become evident that once again we would be challenged by above average temps for the week.   Temperatures were going to be reaching into the 90s at times, making for a very challenging hunt.  In years past, this would have been almost fatal for any hunt no matter what the game pursued.  Fortunately for us, we were using ScentBlocker’s BUI (Bear Under the Influence) this year.  BUI is specifically made for bear hunters, not only providing an attractant with a sweet berry aroma, but also infused with a root extract that is known for calming and relaxing animals. Although I hadn’t experienced BUI’s effect on bear up to that point, I had experienced the effects that ScentBlocker’s DUI (Deer Under the Influence) had on deer and how they would respond to it during the heat of the day.  In all seriousness, my experience with the product was beyond incredible.  In 2015 we were getting trail camera photos of mature bucks coming to the DUI with 100 plus degree temperatures.  With those results on my deer herd back home I was confident that BUI would be the great equalizer on this hunt ensuring that we would still get a shot during daylight hours in spite of the heat.

Larry had been checking the Cuddebacks, and refreshing the BUI at upwards of 15 locations for 3 days before our arrival and had really nailed down the best spots for us all to focus on.  For my first sit, I was going to be sitting in a stand that was pretty open with a great view of the surrounding area.  Multiple bears were coming to the BUI at that spot, but there was one in particular I was very interested in.  He was not a large bear, but was a beautiful red phased bear.  A color phased bear had been high on my most wanted list for years and I quickly decided that he would fit the bill for what I was looking for.

Day one and two were both very similar experiences. On our way in, we saturated the area with BUI before climbing into the stand and then would sit for hours in the high temps trying to avoid being carried away by mosquitoes that rivaled the size of some of the moose we had seen on the drive up.  Fortunately, I was wearing my Knockout suit so I was staying as cool as one could hope during the sit.  Between rain showers and the beating down sun, we were contending with strong and shifting winds.  This particular area was nestled down in a bowl which proved to be extremely unpredictable with the winds shifting as they were so I was very thankful to be covered up in my Trinity scent control gear aided by the strong scent of BUI in the area.

Filming the experience always reduces your ability to hunt right up to dark which became a challenge for us the first two days.  The bear I was after appeared within shooting distance each evening right after we had climbed out of the stand due to camera light running out.  After the second night of this happening we decided to move to a new location that had three different bears coming in daily before dark to the BUI.  Timing was perfect for the move as we had a cool front push through dropping the temps down into the low 60s with just a slight breeze.  That evening we climbed into the stand around 3:30pm which was early, but this spot had bears visiting all throughout the day the two previous days.  Personally, I can’t imagine having thick fur and moving around in 90 degrees, but once again the BUI proved to be the great equalizer under those conditions.  That afternoon proved to be an extremely exciting experience.

Just 30 minutes into my sit, I got a glimpse of a bear moving through the swampy undergrowth out in front of me moving to my right and deeper into cover.  Multiple times he would sit down and just look in our general direction but would then move off a little further into the brush.  Having hunting predators for years back home I knew there was a very good chance he would circle downwind before coming in.  For the next 40 minutes I was on high alert trying to catch a glimpse of any movement possible.  It was then that he reappeared in front of me.  With zero caution to the wind he came straight in, and downwind of us.  I was absolutely floored by his actions.  It was as if we were in his home and he didn’t have a care in the world.  I knew at that moment the effects of BUI were truly as good as what I had witnessed with my deer when using DUI the season before.

I waited for almost 15 minutes before he presented a perfect shot.  With his leg forward and shoulder out of the way of his vitals, I sent the Rage on its way.  With the arrow buried perfectly behind his shoulder my bear ran back in the same direction he had come, and piled up mere moments later making for an extremely easy tracking job.  Shortly thereafter I was blessed to kneel down next to my first bear and give thanks for the experience and the freedom to pursue my passion in the outdoors.

Like all the others before it, this hunt was not without its challenges.  As hunters, we are always looking for that edge or the products that make us either more successful or comfortable in our pursuit.  Aided by gear to block the heat like my Knockout suit, and the attractant that BUI provided to the bear I harvested, I left Canoe Canada Outfitters with another great memory of a successful hunt.