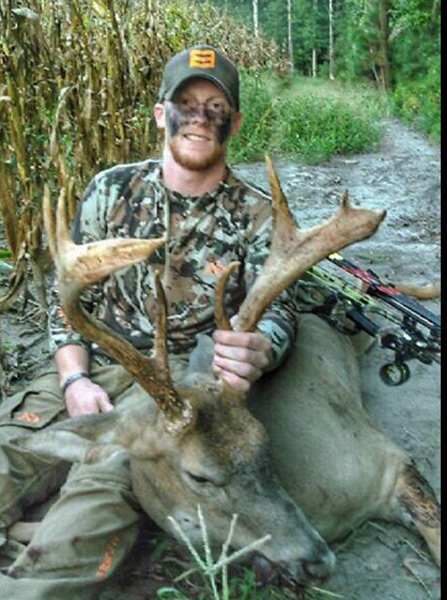 Author with his first buck with a bow.

Unlike years in the past I was not able to hang stands, review trail cameras and put out supplements this summer. With my cousin still living in Delaware he did all the work on the farms while i was in process of moving back home from Alaska. The day I returned home to southern Delaware we sat down and started our game plan on the bucks in the areas we would be hunting come September 1st the archery opener here. A buck we called Moose was showing himself almost every morning and I knew that was going to be the buck I would target come opening day.

Opening day came and left me with little hope on how the rest of that week was going to pan out for me, as the temperature had risen to the high 80’s and I was seeing no deer movement. After hunting a few more days the opening week I decided to give it a break and let the temperatures cool down. Little did I know Saturday would have been the day to be in my stand. I helped my cousin recover his biggest buck to date that night and once we pulled the cards the next day I found that two of the target bucks had been in front of my stand that night, talk about frustration. None the less I knew I had to be in my tree come Tuesday morning.  With the perfect wind and the cooler temperatures I had a feeling Moose was going to show up. 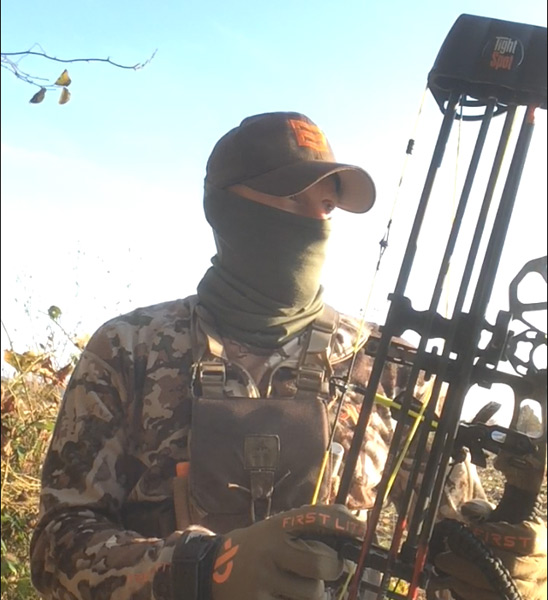 September 8, 2015, I ScentBlocker’d up and made the 600 yard walk from my house to my deer stand. I was settled in well before day break in hopes of not bumping any deer out of the standing corn should I come to stand any later. I played a few rounds of Hill Climber and scrolled through my social media and then I heard the tell-tale sound of crunching leaves behind me and they were coming my way. Putting my phone away I eased myself up and reached for my bow. Due to the thick the cover I could not see what it was util whatever was making the soft sounds had entered the corner of the standing corn. With big eyes I waited patiently and then, there they were, antlers popping out from behind a holly tree. I knew he was a great buck as he entered the open spot in the corner. All the years I spent not harvesting a mature buck with my bow was about to come to an end I hoped.

As he worked his way into the opening I could tell he was on edge,  snapping his head side to side, looking in every direction and taking slow cautious steps almost as if he was walking through a mine field. Finally, he dropped his head to feed and as he did, I drew my Hoyt Nitrum. Settling my pin on his heart, I took a deep breath and squeezed the trigger on my release. I saw the arrow quickly disappear where I was aiming and by the way he reacted when my arrow hit I knew it was a heart shot. At impact the buck went face first into the ground and then exploded off into the corn field mowing down rows as he went. From that point on, all I could hear was corn stalks breaking and then, seconds later it was silent again. I had just harvested my very first buck with my bow.  I couldn’t believe it. Any animal taken with a bow is a trophy but this one was a very special trophy for me.

I had not even hung my bow back up and I called my cousin and father to tell them the good news. My father who introduced me to hunting got to my stand within minutes of us hanging up, grinning ear to ear with excitement for me. I lowered my gear from the stand and we began to follow the blood trail, although we did not need to. The Dead Ringer Broadhead did it’s job well as the buck didn’t travel very far after the hit. The moment my eyes saw his white belly I dropped to my knees thanking God for the animal I had just taken,  a feeling a bowhunter  knows well.

My father and I drug the buck out of the corn and started to take some pictures, immediately sending them around to all of our friends. As I sat behind his horns I was hit with a challenge I ‘ve never had to face after killing a deer; what position was I going to him him mounted in?

Once we got him home, the work of caping and butchering my buck started. I don’t think I stopped smiling the enter time and well into bed that night. My long hard fight through the years was over and I finally had my hands on a big set of horns.