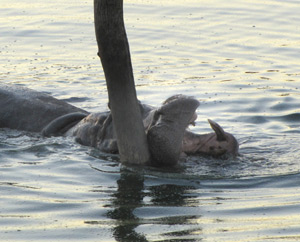 Across America this summer, whitetails are wishing for a little air conditioning. Temperatures have remained above average since early June and are predicted to stay high. So how does this affect deer in our whitetail woods?

For one thing, water sources like puddles and seeps may have disappeared but small ponds and perennial streams, although diminishing, are still there. Deer find water even when they are living in a drought in Texas. Few deer ever die of thirst.

However, what about the vegetation quality? That is a different story. During the summer, deer are primarily grazers, eating grasses and forbs. The qualities of these grasses are affected by dry conditions. Deer need to eat about 7-8 pounds of grasses a day during the summer grazing period. Fawns depend on the maternal doe to produce milk to nurse them and that requires quality food.  This may mean extended feeding periods for does.

The most notable behavior change for deer during extended hot periods may be bedding cover. Expect them to locate deep shade with a prevailing wind cooling them. Because deer do not sweat, they have to cool themselves by managing their exposure to the sun.

One thing deer can’t manage is the number of tiny biting midges that carry EHD. Dry, drought like conditions favor this insect. Epizootic Hemorrhagic Disease is devastating on whitetails and dry hot summers are conducive to this disease hammering deer. A percentage of deer die within 7 days. Back in 2012, Southern Michigan lost well over 10,000 deer to EHD.

The impact has been felt in dozens of states. Wildlife biologist, Dr. Dave Samuel commented that, “About 2/3 of the deer bitten by an EHD infected midge will live and will be immune for life.” EHD often occurs in regions.

I just returned from South Africa where I run a custom photo safari. (www.africanphotosafaris.org ) I made my 16th visit to the massive Kruger International Wildlife Park and was surprised to find that they were locked in a struggle with the worst drought in 110 years. The rivers still flowed slowly but the tens of thousands of grazers had overgrazed the grasses. Most notably affected were the hippos that only travel a short and defined distance from the security of the river each night to graze. An unprecedented mass die off was underway. About 1/3 of the 4000 hippos have died of starvation so far. Most of the grasses back ½ mile from the rivers and lakes have been consumed.

This week in the whitetail woods, it may be hot but deer are not facing a life or death situation. Like you, they are just ready for a break in the heat. Expect them all to be out there waiting for us on October 1. Cool weather and rain will come. Be ready.