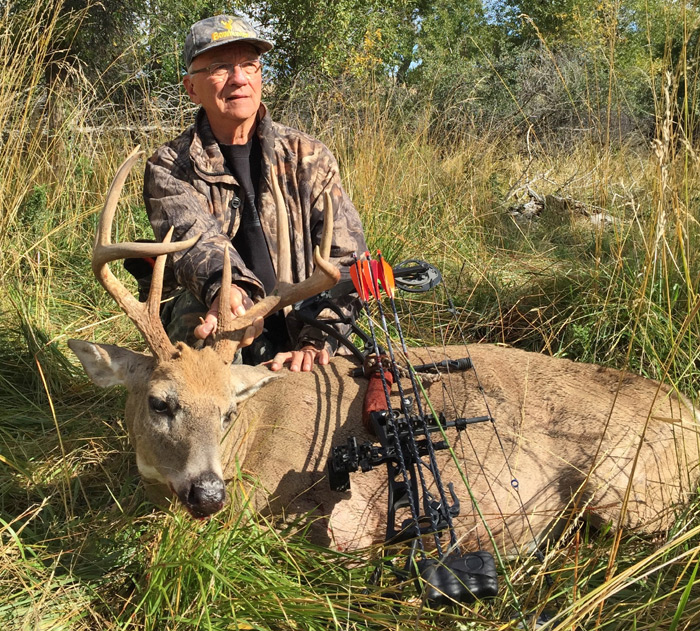 When revenues from deer and elk hunting are lost, management of other game species will suffer as game agencies try to work with much less license and federal excise tax revenues.

The first case of a human brain prion disease, Creutzfieldt Jacobs Disease, was found in 1920.  In 1954 a researcher proposed that scrapie in sheep was caused by a “slow virus” (now we know it was a prion).  In 1982 sheep scrapie researchers named this abnormal protein “prion,” meaning “proteinaceous infectious.”

My point here is that the prions that cause Chronic Wasting Disease (CWD) in whitetails, mule deer, and elk, are extremely complex, almost impossible to study, and thus very difficult to eliminate.  Just this month scientists at the University of Alberta Medical School published the first description of a prion.  So, from the time of the first prion disease in 1920, with hundreds of scientists working on this, it took 96 years to describe a prion.  Let me reiterate.  If it took almost a century to describe the causative agent of CWD.  Is it any wonder why most biologists are very concerned for the future of our wild deer?

What do you mean Dave?  Sure some deer have CWD, but that doesn’t mean we’ll lose them all.  Maybe not, but maybe so.  Consider this brand new data from a Wyoming study.  They showed that in an area of Wyoming that had a prevalence rate of around 35%, based on eight years of data, with a CWD-causal death rate of 10 percent per year, the mule deer in that region will be extinct in 40 years. 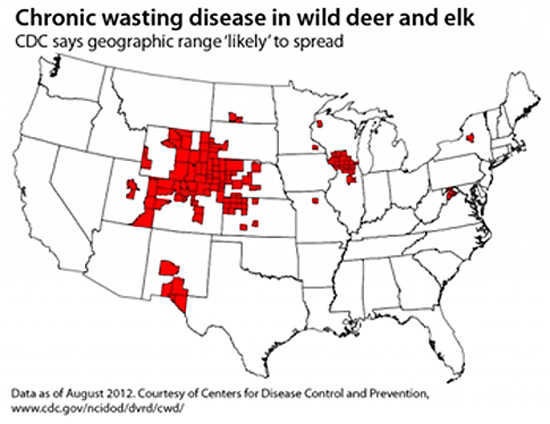 When you consider that today there are regions of the country where the CWD prevalence rate for whitetails is 40 percent, maybe there should be a huge cause for concern about the future of deer hunting.  I’ve been crying wolf for years now about this disease, as have others, but hunters have blithely passed it off as just another disease, no big deal.

Back to how complicated this disease is.  Let me quote from the Alberta study.  “The infectious prion protein is a misfolded protein, which makes it very difficult to purify and study.  Since it clumps together, standard structural biology techniques cannot be used to study it.”  They go on to note that prions were first purified in 1980 and it has taken 36 years to describe the structure.  Since we did not know anything about the structure of the prions, we could not learn how these infectious prion proteins propagated.  This new study gives a first step in that process. 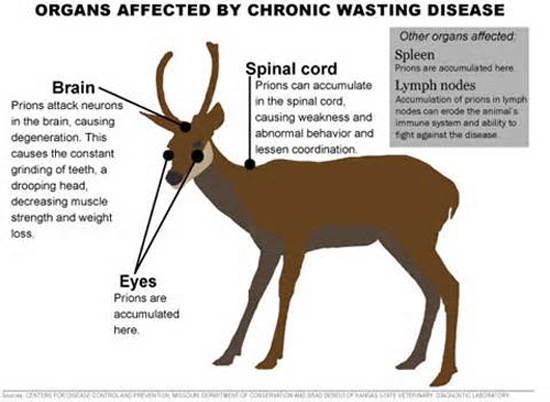 The journal paper describing this is way too complex for this simple-minded wildlife biologist.  Let me give you a quote from the Introduction of this journal article, to give you an idea of how complex this topic is.  “The non-infectious, cellular prion protein (PrPC), which has its highest expression levels in neurons, is misfolded through a posttranslational process into an altered, infectious conformer termed PrPSc or prion. The structure of recombinant PrP, which approximates the structure of PrPC, has been solved repeatedly by NMR spectroscopy and X-ray crystallography. PrPC consists of an unfolded N-terminal domain and a largely ?-helical C-terminal domain, which contains three ?-helices and a short, two-stranded ß-sheet. In contrast, PrPSc has been found by a variety of methods to contain predominantly ß-sheet structure.”

That’s just a sample of the complexity of prions.  Now let me just throw in the first paragraph from the Results section of this paper.

“GPI-anchorless PrP 27–30, which, for consistency, is named according to the molecular weight of GPI-anchored PrP 27–30, was purified from the brains of transgenic mice expressing GPI-anchorless PrP that were infected with prions of the Rocky Mountain Laboratory (RML) strain. The purification procedure took advantage of both the in vivo formed amyloid fibrils of GPI-anchorless PrPSc and their partial resistance against Proteinase K (PK) digestion. Limited proteolysis of GPI-anchorless PrPSc, similar to the digestion of GPI-anchored PrPSc, removes just the first ~66 N-terminal residues, leaving a ~17 kDa PK-resistant, GPI-anchorless, unglycosylated fragment, and a very modest amount of monoglycosylated protein (Fig 1A and 1B). To verify that the purified GPI-anchorless PrP 27–30 preparations were still infectious, as reported by others, we inoculated a cohort of wild-type mice with the purified prions. All animals developed the typical neurological signs of RML-prion disease. Furthermore, biochemical and histopathological analyses demonstrated that the brains of infected mice showed all hallmarks of pathogenic prion disease, for example partial PK-resistance, presence of vacuolation, gliosis, and PrPSc deposition in the brain tissue (Figs 1B and 2). The observed, moderately-extended incubation period compared to animals inoculated with untreated brain homogenate (Fig 1C) is compatible with the use of PK treatment, which is known to degrade PrPC and PK-sensitive forms of PrPSc, thereby reducing the apparent prion titer. In addition, the highly aggregated nature of the purified prions is also known to lower the effective prion titer.”

OK, enough. You get the idea.  Prion science is extremely complex.  One hundred years later we have no cure for Cruetzfeldt Jacobs Disease in humans or Scrapie’s in sheep.  Both prion diseases.

We already know that prions on the ground can’t be killed.  Not with bleach, high temperatures, other chemicals that kill most anything, etc.  You can have CWD-positive deer in a field, remove the deer, do anything you can including fire, etc., to remove and kill the prions, and one year later put healthy deer in there.  Guess what?  They get CWD.  Prions seem to be indestructible.

And how long can they live in the wild, or on a deer farm where CWD-positive deer have been found?  We have no clue.  That’s why the federal rules that declare a deer farm as CWD-free if they haven’t had a CWD case in 5 years is a bit weak.  Most states with deer farms use that rule.  If a farm is thus declared CWD free because they haven’t found CWD for 5 years, then a farm in another state can import deer from that CWD-free farm.  But we know that this approach doesn’t always work.  There is one instance where deer from a farm that was “CWD-free” for 11 years, infected another farm.  Bottom line, we do not know how long prions can live in nature.

In fact there is a lot we do not know about prions, except that they are the causative agent for CWD.  And the only way to find out more is research.  But that requires money, and CWD money has been limited in recent years.  It seems that it’s hard to get politicians excited about a disease that impacts deer.  Cattle, yes.  Deer, no.

Surely that cannot happen.  I hope not.  At my age, I’ll be gone if it does.  What is pretty much guaranteed is that CWD will spread to most of the range of whitetails, mule deer, and elk.  Look at how fast it has spread since first found in Wisconsin in 2002.

Once in an area, unless the deer are hammered by hunters, the prevalence rates will go up.  Will the scenario found with mule deer in Wyoming then apply?  We don’t know, but it is likely.  Will some deer become immune, and breed that immunity?  I hope so.  Will we find a cure for the disease?  I really hope so.  But right now, when a few television and celebrity personalities tell you that EHD is the real killer and CWD isn’t a problem, don’t believe it.

Deer populations recover from EHD.  Based on the new Wyoming study, and the Alberta study showing the complexity of prions, the CWD situation is extremely scary.  I’ve been scared since 2002.  Maybe it’s time we all started getting concerned and talking to our legislators.

ABOUT THE AUTHOR:
Dr. David Samuel spent 30 years as a professor of wildlife management at West Virginia University. He is now in his 44th year with Bowhunter Magazine, where his Know Hunting column still appears. He currently writes the Know Whitetails column for the Whitetail Journal, The Future of Hunting column on www.bowhunting.net and writes a weekly outdoor column for WV newspapers. His activities on behalf of wildlife are diverse: from initiating the West Virginia Bowhunter Education Program to helping get bowhunting legalized in many European and African countries.

Branching Out For The Bucks