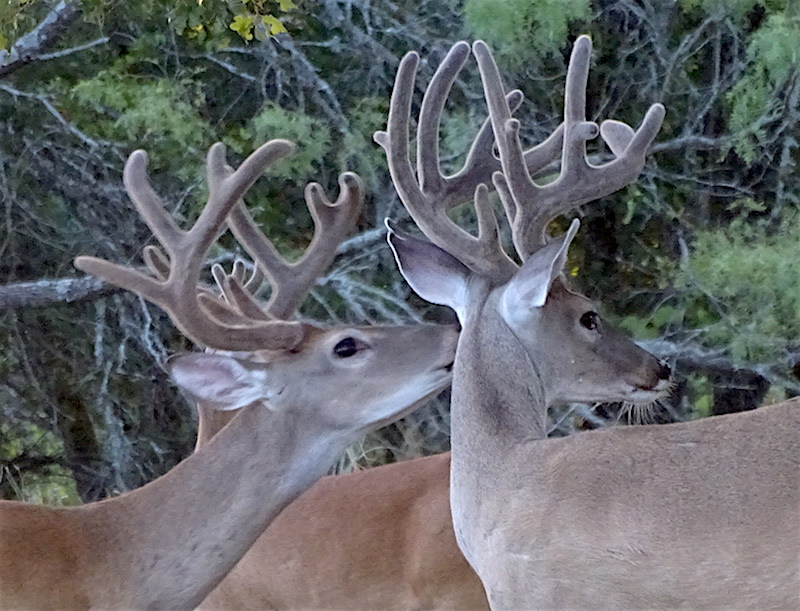 What Bucks Are In The Area? Better Find Em’ Fast Because The Window Of Time Is Small.

I’m not a deer biologist or even a whitetail expert, I’m just a guy who loves hunting with his bow and arrow … and is lucky enough to have more opportunity than most to hang out in the deer woods year round.
Over the years I’ve listened to hundreds of deerhunters’ explain all manner of thing about whitetail deer. Two frequent deer tidbits that I get a kick out of are “you have to know what the buck is thinking.” And also that you must know”why” the buck did what he just did.”
In my experience I’ve found that I learn best from watching, scouting and thinking, with the emphasis on the watching part. Not always, but all too often, talking with people about deer and what they do seems to be a first-rate way to gather “deerhunting mis-information.”

It’s always been that way, too, from the time I was 15, sitting around the hunting camp campfire in Florida, concentrating on every word our archery club’s pundits said about deer and bowhunting. Back then I was jam-full of deerhunter lore like “there is a buck behind almost every doe.” And “if today was great tomorrow will be better!”
Well, the honest truth usually turned out to be, “there are no bucks behind the does” and there is no “tomorrow”.

There is an elementary problem with learning “why” deer do things or what they are “thinking.” They are non-verbal and they can not tell us why, so we are unable to fact check them. We don’t actually know what was going on, plus they act mainly from instinct and aren’t doing what we know as “thinking.”

The first thing to give your attention to, every year, is the make-up of the gang of deer where you hunt. Every minute you spend in “your” deer woods during June, July, August and September is absolutely Golden.

Enough of that for now, let’s take a further look at the deer happenings in mid August. The buck below is a young 8-pointer. Right now his 4th points are short but they there is time enough for them to get a little longer. And there is plenty of time for him to get a few years older. 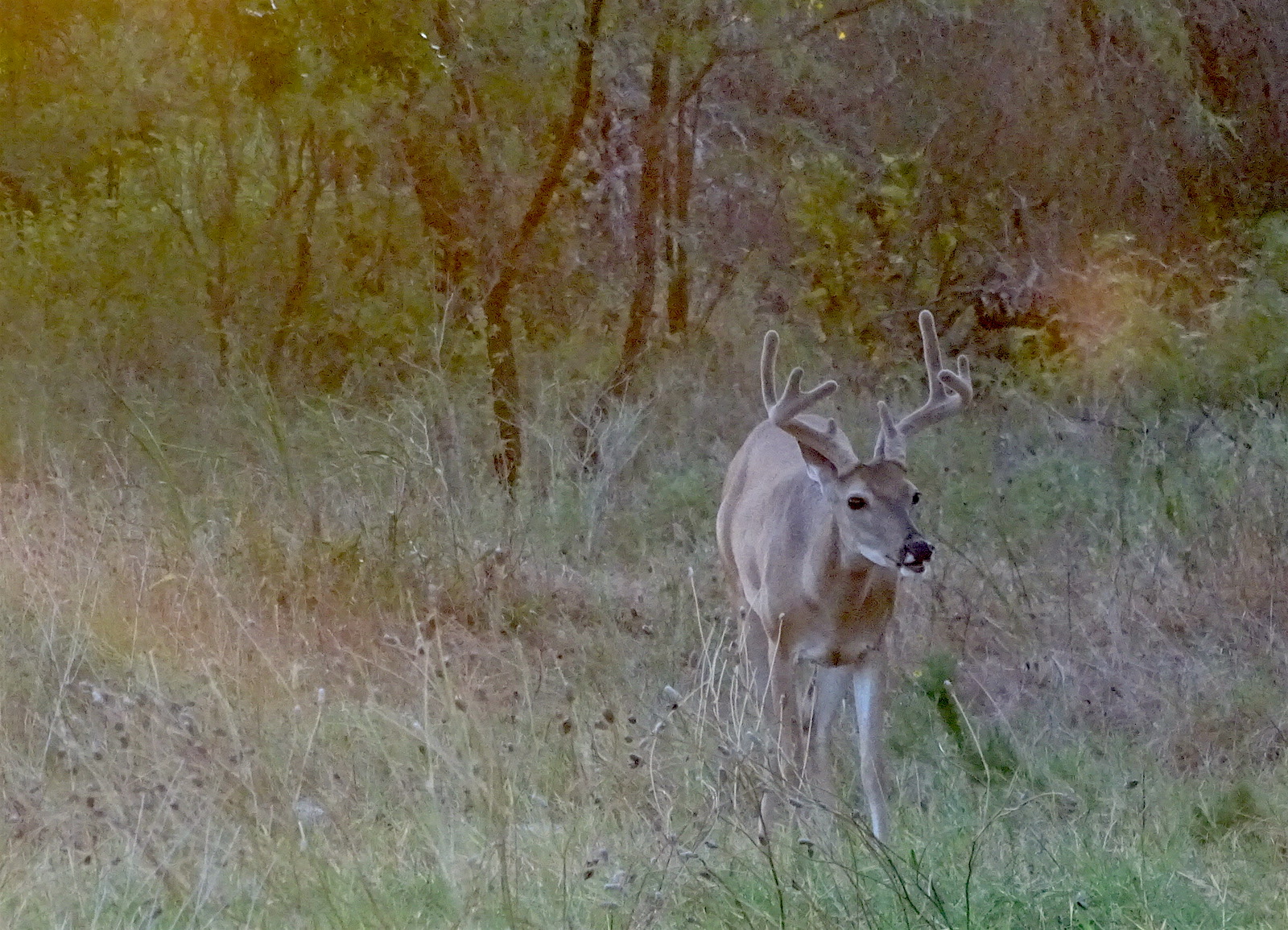 He has his eye on scarfing down some of the protien pellets that are in the Duck’s protien feed holder. There is already another buck there and he is older and larger than him. He purposely does not make eye contact with the larger buck. 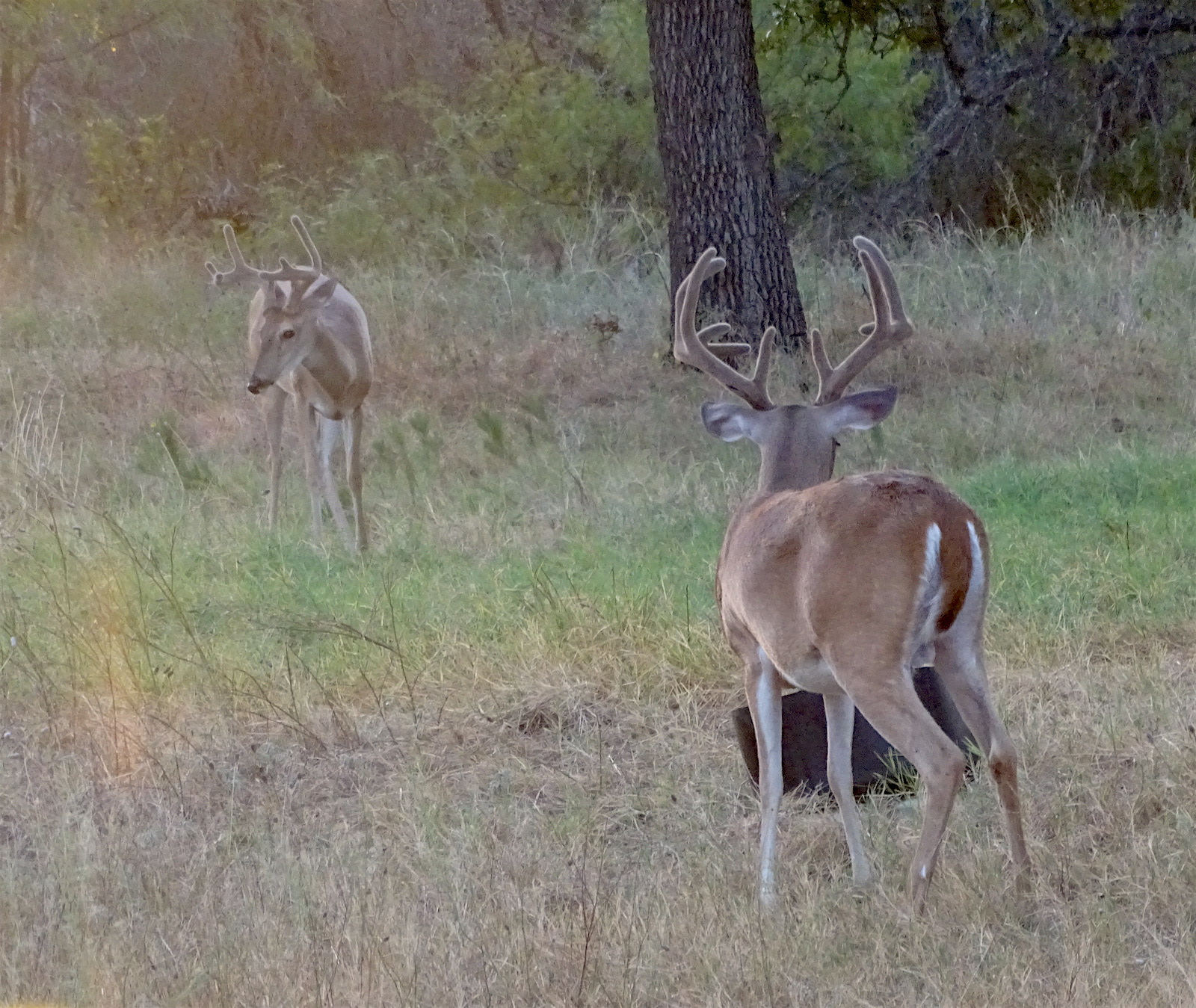 The larger buck walks around the black protein gizmo and blocks the younger bucks path. 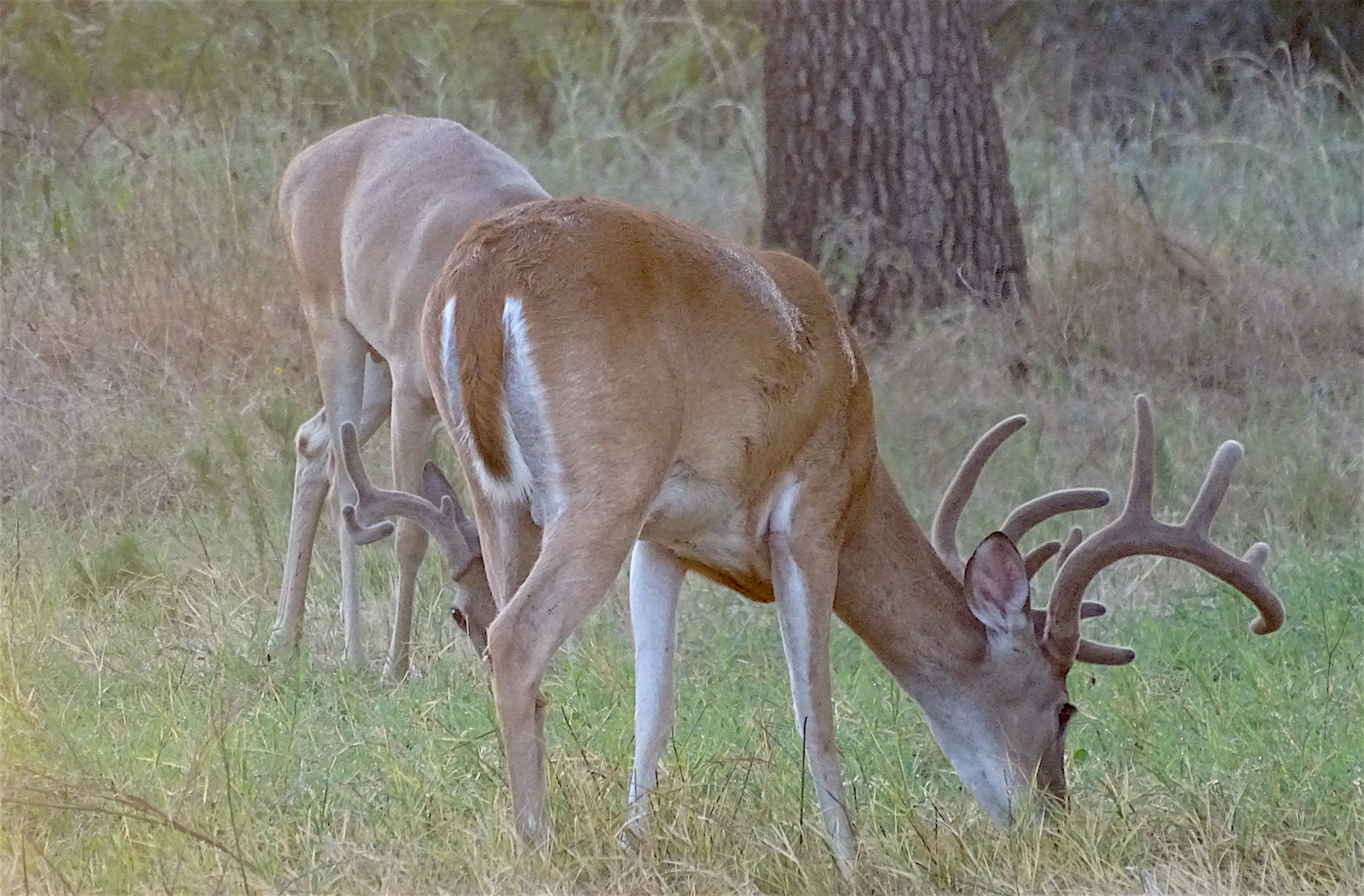 The young 8-point gives up on the protein pellet idea and walks around. Now some other bucks are in the area. 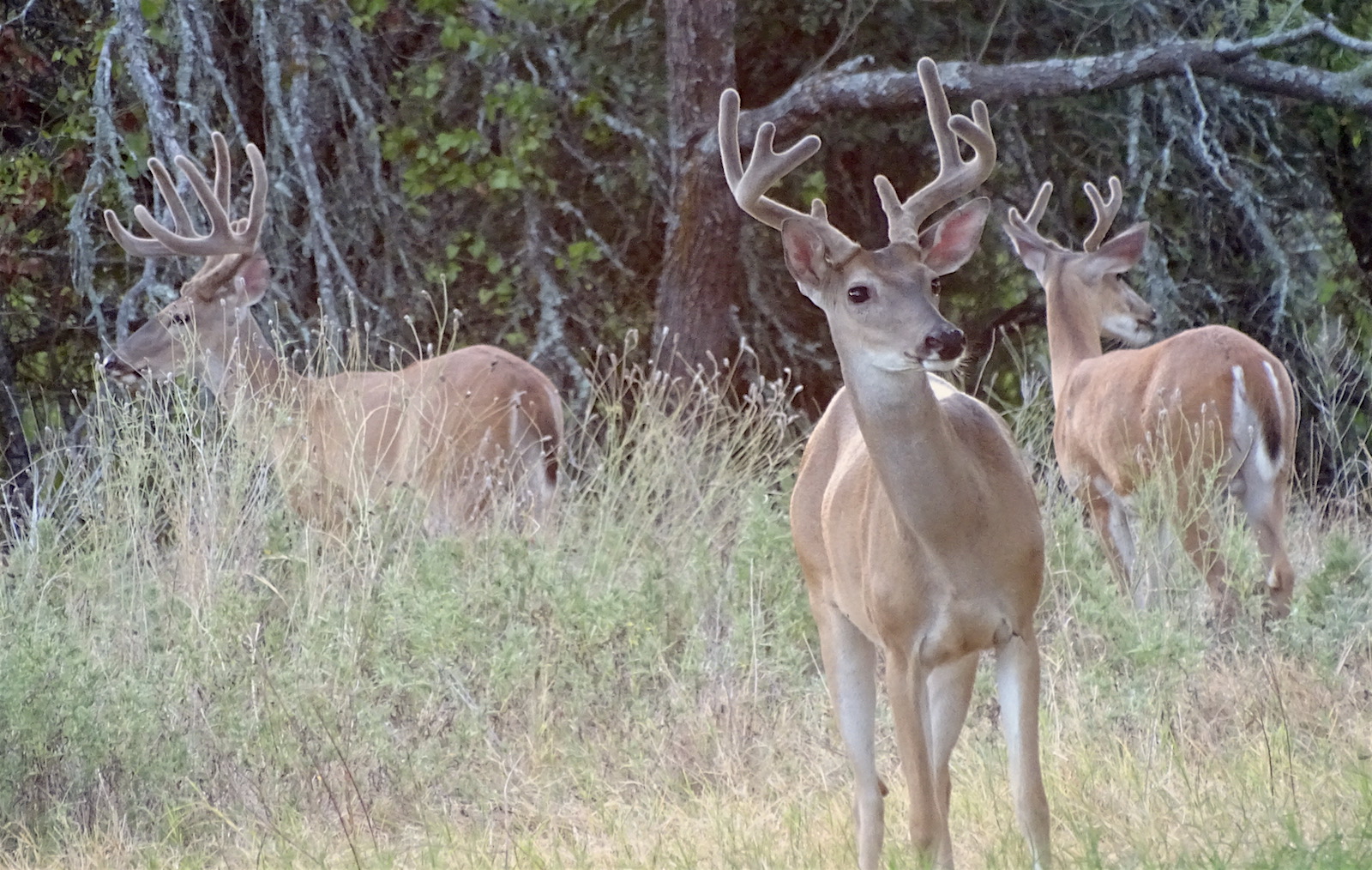 The buck on the left below is nicknamed Cut Ear because of his cut ear on the left side. He is a 10-point with a few kickers. One looks to be about 4 inches long. 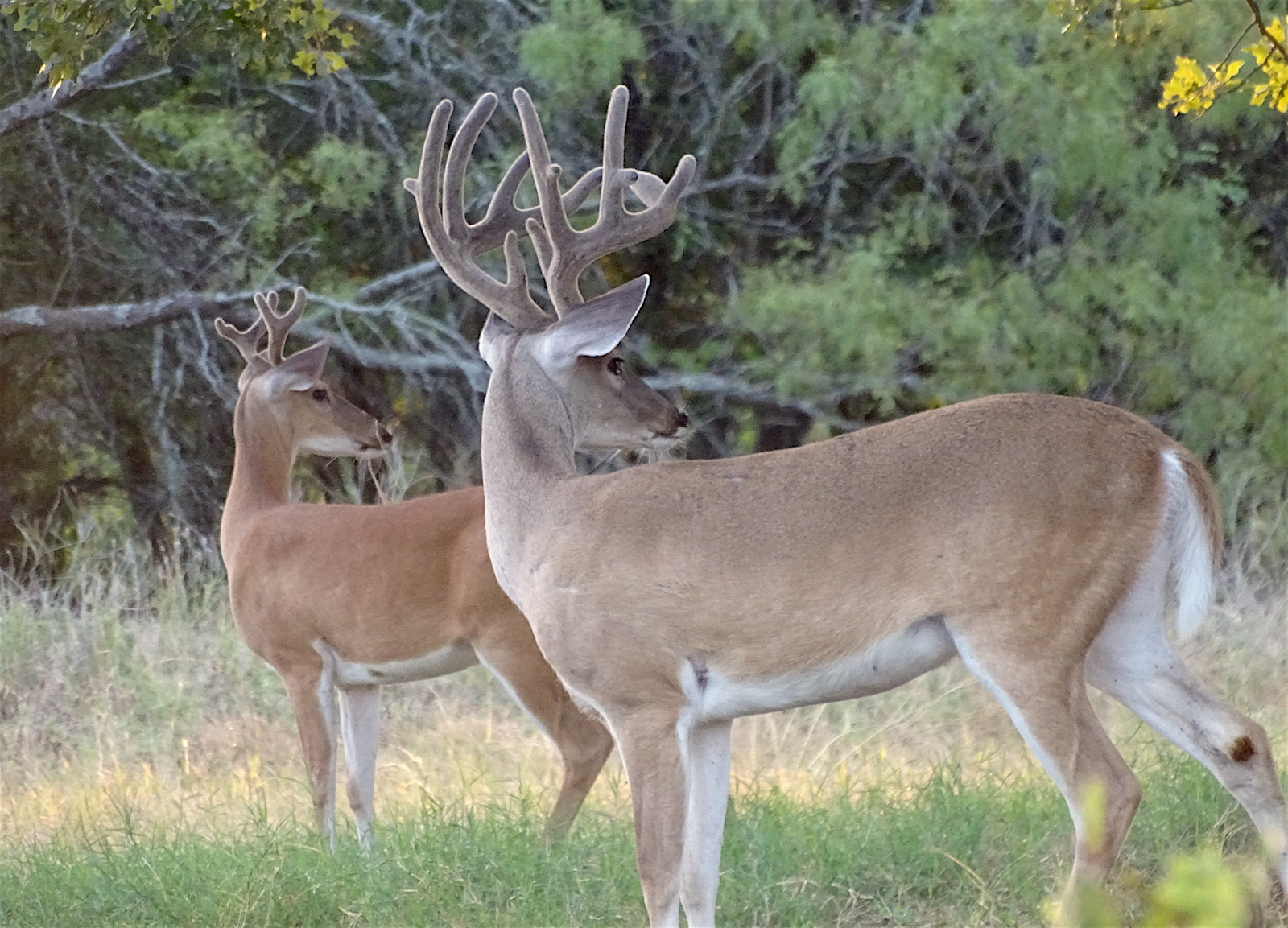 Two days later a nice 10-point walks up from the tall weeds on my left. There is also a fawn in the weeds, do you see it? 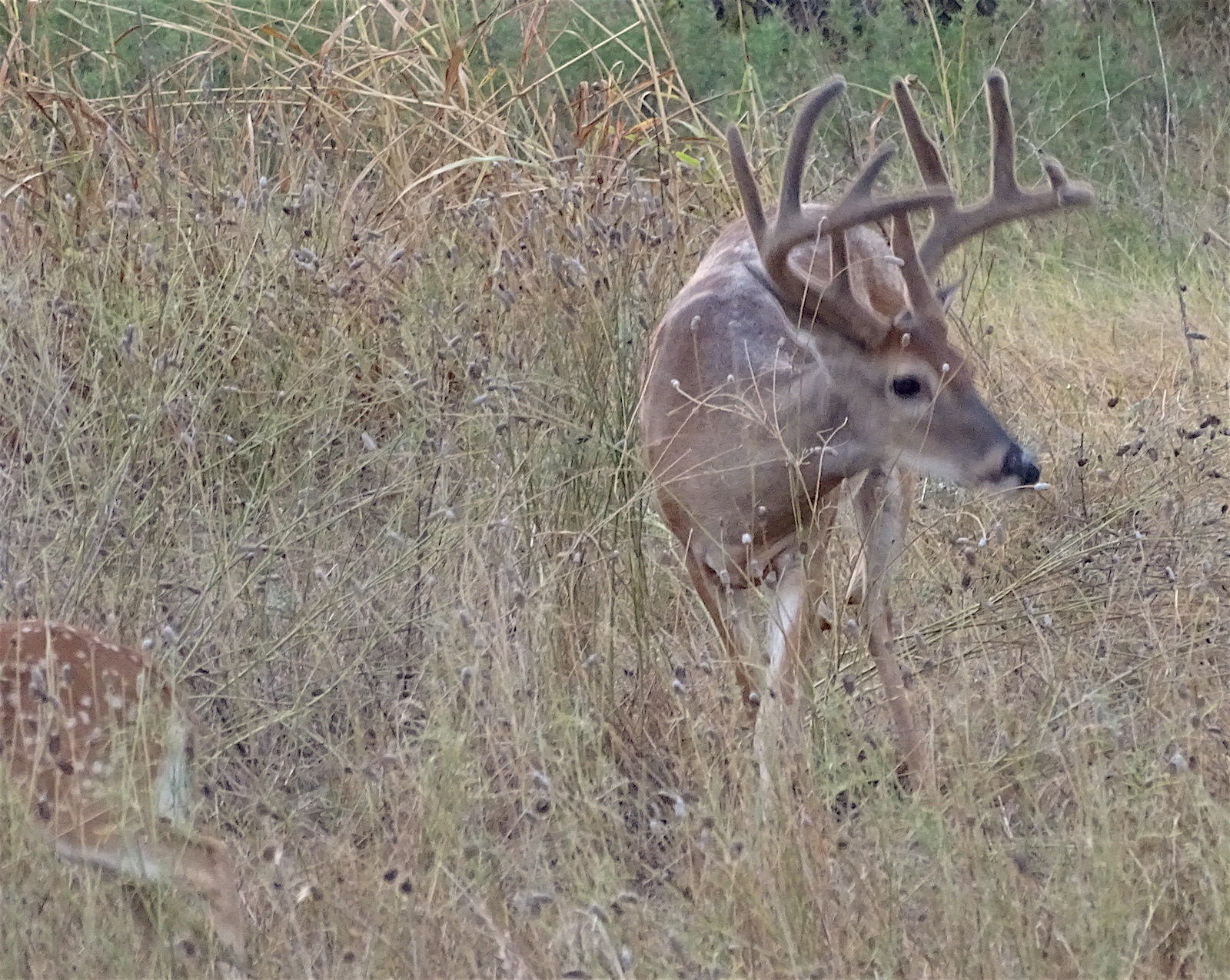 Below, is a picture I took of a wide 10-pointer licking the head of the Cut Ear buck. Plus, notice how dark the hocks are on the Cut Ear buck. So in mid August we are seeing some signs of less passive buck behavior. 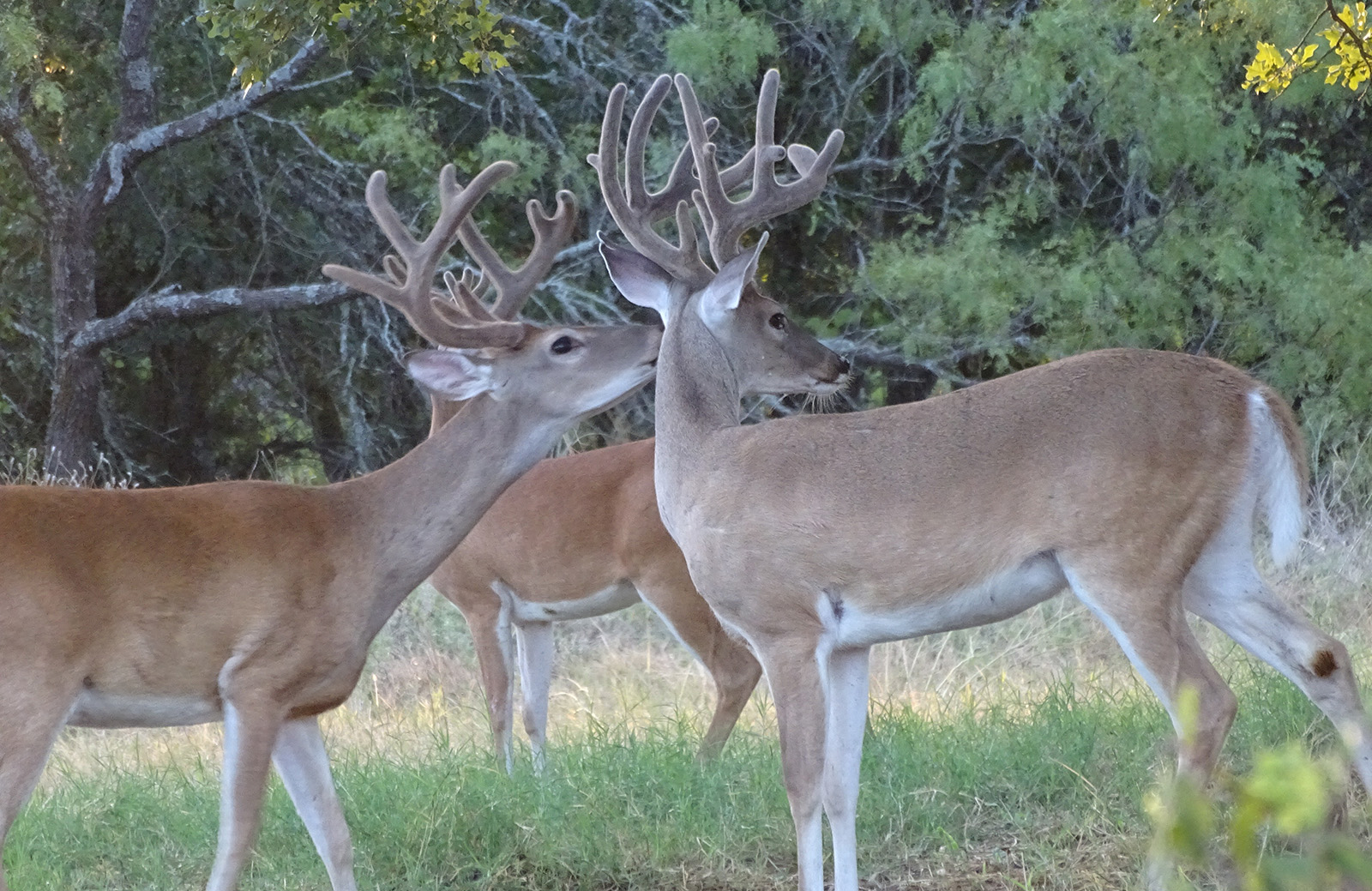 Here are two bucks that were walking into the nearby woods. It is morning so there is a good chance they are on the way to their bedding area. 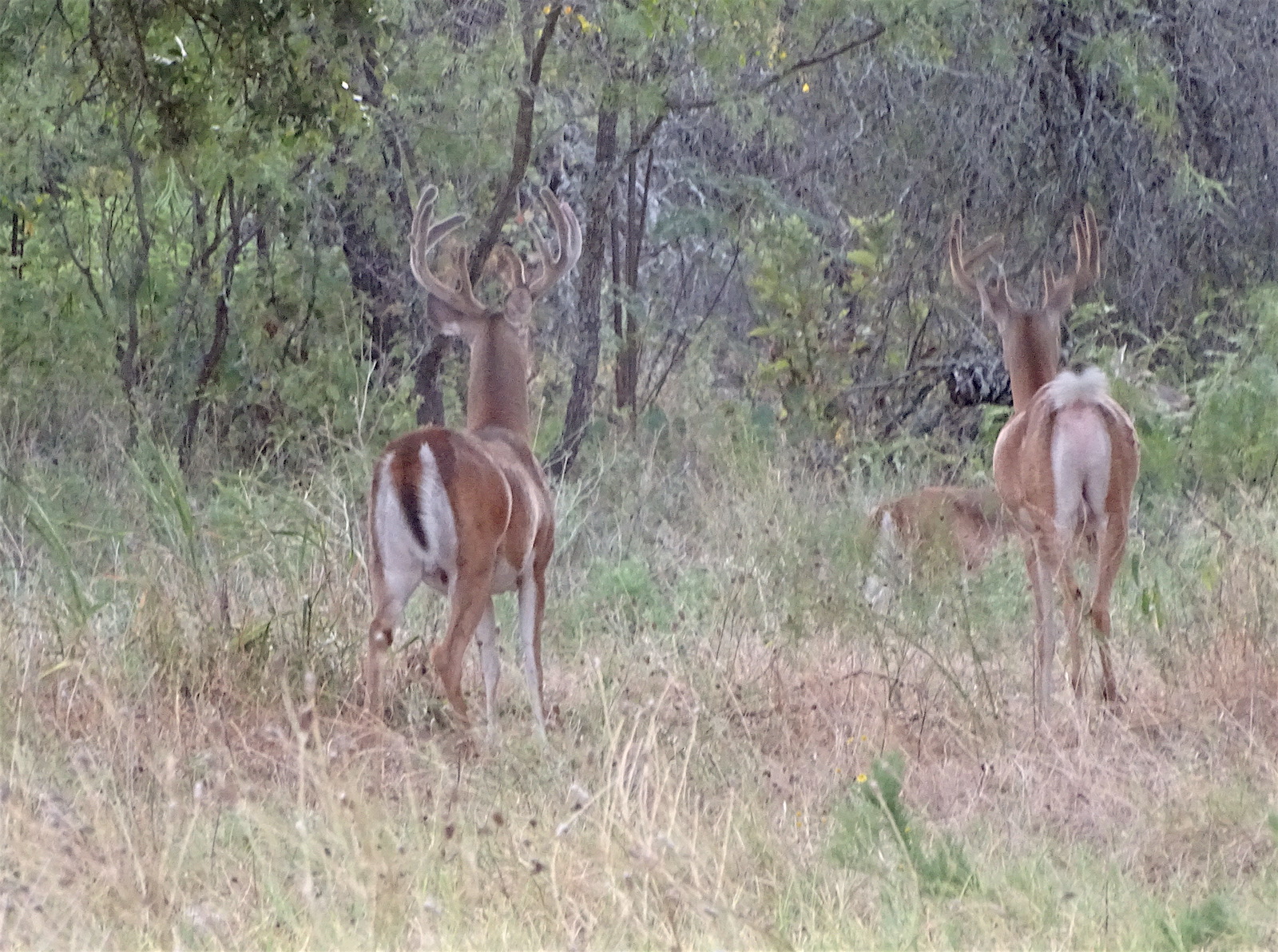 Here’s a Sixer in velvet. He is very active in spite of his young age and he goes all around. 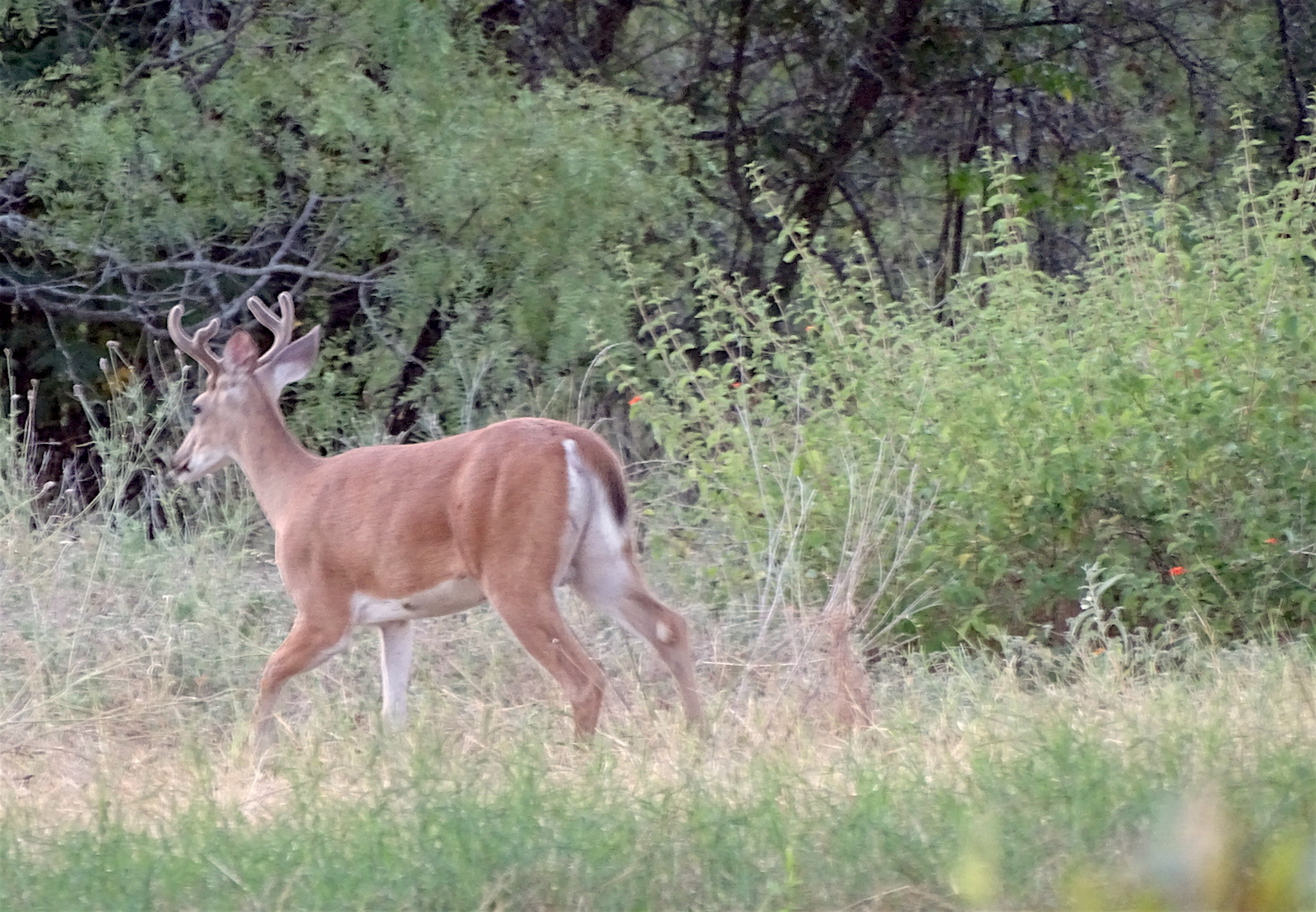 Out for an afternoon stroll. 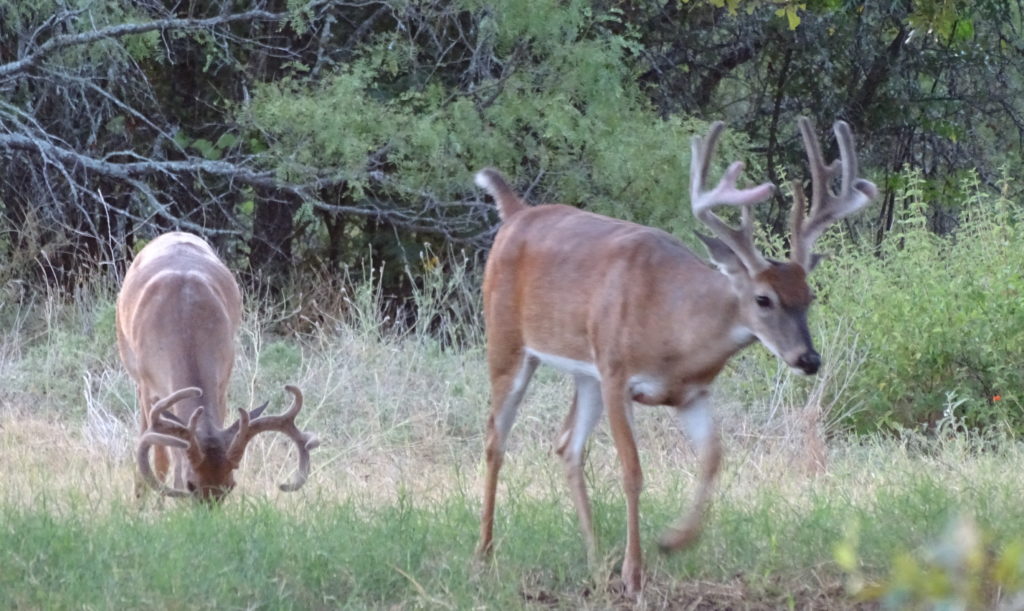 When possible I pay to the wal bucks go when they leave the area where I am taking photographs of or will be hunting. Again this is Cut Ear and he is walking to the right as he is leaving. He is exiting to the east. It’s late afternoon and he is heading out for the night. 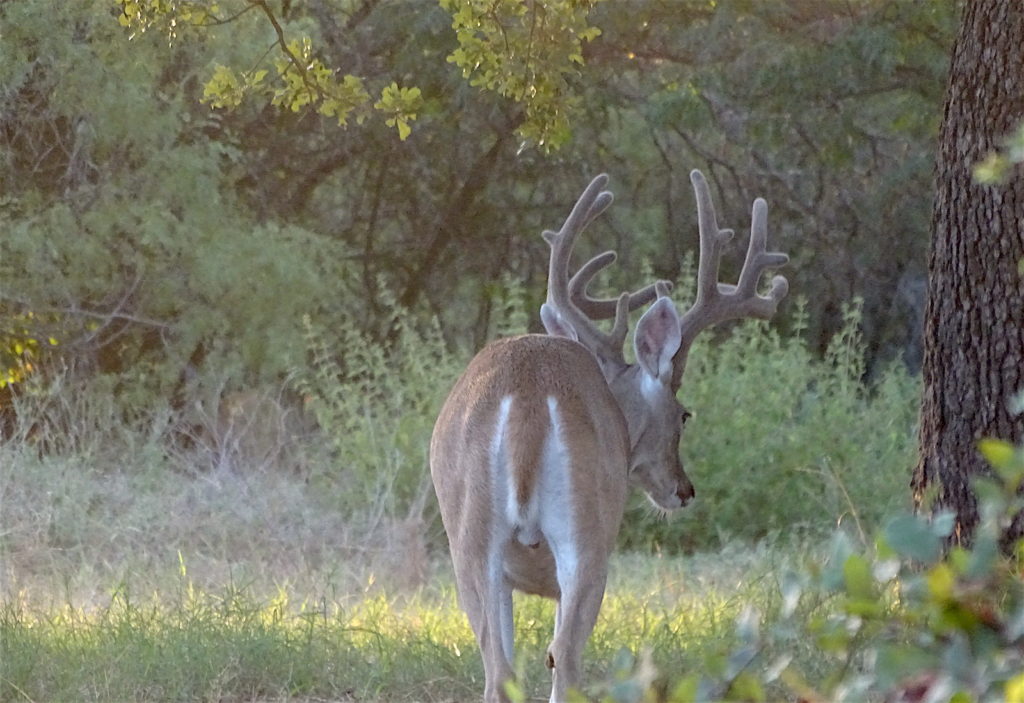 To Re-Cap, more and more bucks are showing up. They’re in velvet and seem to want to be seen by the bucks as well as the does in the area.

Full-Sized Firepower in A Small Package

Full-Sized Firepower in A Small Package