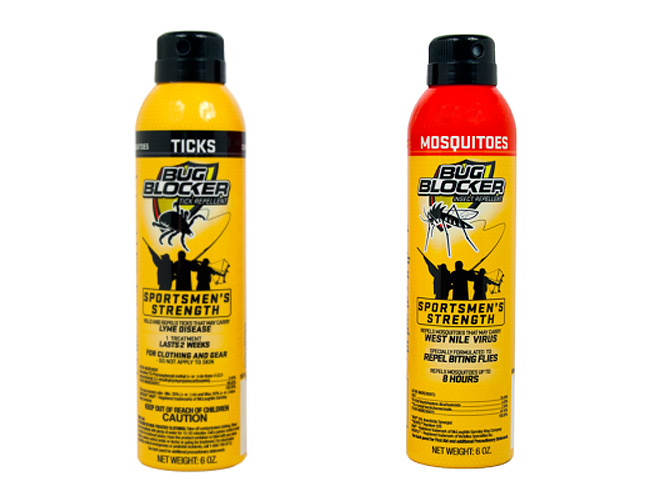 Zika, West Nile, Lyme disease and Rocky Mountain Spotted Fever to name a few diseases that can be transmitted from mosquitos and ticks while out hunting. You should use a product designed to protect you from all of them. This is where ScentBlocker’s “Bug Blocker” products come into play, one for Ticks, one for Mosquitos.

First up in the line-up is, Bug Blocker Tick Repellent. I have not gotten to use this yet and can only say the following, Bug Blocker Tick Repellent has Permethrin, a synthetic insecticide chemical that kills and repels ticks that may carry Lyme disease and other biting insects such as chiggers, spiders, gnats and repels mosquitoes that may carry the Zika or West Nile Virus. It is designed to be sprayed on your hunting clothes, tents and hunting gear and is not to be sprayed directly to the skin. Spraying on skin could cause irritation, tingling, burning and itching. If it gets into the eyes can cause redness, pain or burning. Spray outdoors and not indoors to keep from inhaling it which could cause headaches, dizziness nausea and vomiting.  It is a popular chemical used in the defense of ticks and works when used properly. It should be noted that Permethrin will kill more than ticks. It can kill 55 other insects including mosquitoes, chiggers and mites.

Next up on the ScentBlocker insect protection line-up is Bug Blocker Insect Repellent for Mosquitoes. Containing DEET a well-known mosquito repellent. This product I can say works like a charm. While up for a weekend on the AuSable River for a weekend trip, we set up camp around 1 p.m. for the night and begin shortly thereafter beginning to experience black flies and mosquitoes.  While everyone reached for some kind of product to defend themselves from the swarming insects, I reached for my Bug Blocker. After 3 hrs. they again reached for their spray of choice and began respraying themselves. After that they began to ask what I was using because I had not needed to reapply since the original application. So, they began using my spray and I never needed to spray again for at least a good 8 hours. I feel this was a real testament to the effectiveness of this spray. Have I used other products that have worked in the past? Absolutely for either mosquitoes or black flies and the protection was for a shorter amount of time. This is not a DEET only product, but contains two additional repellents to repel other biting bugs such as, black flies, gnats, chiggers and spiders.

Overall, I have found the mosquito repellent to be awesome and know that when I use the tick repellent I will be equally protected from Lyme carrying ticks. The current online pricing for each of these products is $9.99 and I have seen it popping up quickly over the summer in many outdoor stores.

For more: Gary on bhn

My 'Once in a Lifetime' Buck