by Corey Williamson
in Bowhunting Posts
0 0
A A
0 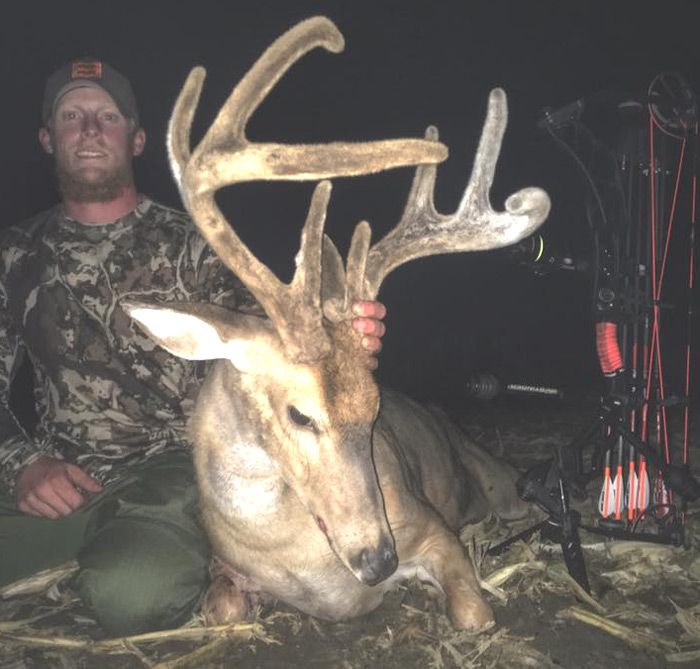 As the minutes of daylight ticked away the author finally gets the right buck, in the right place and makes the right shot.

I had never felt anything like it before in my life, the soft feel of it in my hands was too much to be true, my first velvet buck finally was in my hands.

After an unsuccessful morning hunt in a deep timber spot where I sat waiting to see the bucks that had vanished into what seemed like thin air eating fallen acorns. Walking back to the house I began to devise a game plan on the afternoon hunt to come. Do I try this spot again or do I put some rear end time on the hang-on over looking a standing corn field? Half way home I made my mind up,  it was going to be the field. The majority of my buck photos were in that spot and with a storm pushing in and the pressure rising it had to produce tonight. At least that was what I was telling myself multiple times walking out of the woods.

I spent a few hours that afternoon shooting dove to pass the time until I went back out after deer that evening. With 9 birds and a box of shells down I really had no choice but to leave and relax before my hunt. Going over all my gear I decided that I was going to take my camera gear out tonight and film a hunt again as it had been a few years since I had done so.

With my bag packed full of camera gear, snacks and rain gear, I loaded the truck and headed to my spot. Thinking of camera angles to shoot filler footage I began getting my Muddy Harness on and spraying down with ScentBlocker. When done, I was ready to make the long haul to my tree.

Once there I climbed up into my stand and began to pull my camera arm and all my gear up and secured before I settled down and shot some more filler footage. With filler footage out of the way it was time for some racing games on the phone to kill some time as I waited in hopes of seeing some deer movement. A few hours later I had seen nothing and was starting to lose hope in the rest of the hunt as I only had an hour and a half left.

Just as I started to get concerned; crash, crunch, crunch there were deer walking behind me. I slowly turned my head till I could see out of the corner of my eye what was making all that noise and there he was, the buck I call ‘Tall 3’s’. He was no record book deer but he was certainly big enough and, he was in full velvet.  I panicked as he walking around my stand and then  crossed  down wind. I just knew he was going to keep walking right out of range, never giving me a good shot. But as I watched, he slowly turned and made his way into the standing corn field with a spike and a doe following along tight behind him. I remember seeing a corn stalk move so I quickly adjusted my camera in that direction and was able to get some footage of him milling around in the corn before disappearing with the other two deer.

At this point I thought he would then take the irrigation trail to the other side of the farm and out of range. Then, I caught movement out in front of me.  It was the spike. I knew he couldn’t be too far behind so I quietly grabbed my Elite Impulse and directed my camera in on the spike. It was something out of a show you would see on TV, a small buck grazing on the corn and then in the back of the frame the buck, head held high moving in the back ground, supreme, confident, cautious. Everything slowed down, this was it I thought, he was going to walk right into the corner of the field and give me a perfect 20 yard shot. Wrong; the doe took off in a playful manner I assumed not as a result of winding me. The wind was perfect and, sure enough, right behind her was my buck chasing her right away from me.

As you can imagine I was really getting frustrated and then the bugs stopped making noise. All I could hear was corn moving. They were making their way back to the corner right where I wanted them to be. With my heart pounding I raised my bow again and got the cameras on and recording.  As I watched, he made his way out of the standing corn and into a tall grass area where water lays after heavy rain.  He then crossed in front of me before stopping behind some tree limbs where I could not see him. I heard sounds coming from the corn and then noticed two more deer working toward me out in front, they all were at a solid stand.

Then, the deer scattered. ‘Tall 3s’ took off but in the direction I needed him to, right in my shooting lane. He came to a stop and looked around as if he was trying to figure out what all was going on, I came to full draw as he started to walk quartering away from me toward the corner. I took my aim and squeezed my release off. The thump of my Black Eagle Arrow hitting the buck was music to my ears. I wondered,  could I have just harvested my second September buck two years in a row and not only that but my first velvet buck?

After waiting a few minutes I texted a few of my good friends that were also out hunting that night with, Velvet Down Baby! I loaded all of my gear into my pack, lowered my bow down and eased out of the stand to go check my arrow. It was easy to find and, importantly, it was covered in dark blood. I wanted to go ahead and start tracking my buck but wanted to give it time to lay down and I also wanted to wait for my cousin to come with his Gator.

The blood trail couldn’t have been any better, I killed my buck last year with the same head; a Dead Ringer 2 Blade Rampage. Staying on the trail I looked up and saw his white belly and horns. Wow, what a great buck. I paused for just a moment and then hurried to the site. Rushing over to that buck was one of the highlights in my hunting career, I finally had my hands on those fuzzy horns I chase every September.