I have two wonderful kids who enjoy hunting, fishing, and being in the outdoors. I have a great supportive wife who allows me to enjoy my passion and share it with my children. The 2015 hunting season was a tough one for my children. My son, Samuel, has had many successful hunts. At age 11 he has already killed two bucks, a doe, and a Pennsylvania longbeard. My 9 year old daughter, Abigail, has hunted for two years now and has never had the opportunity to harvest an animal.

Samuel spent the hunting season passing up almost anything that walked in front of him. He wanted to kill one of the “Big Bucks” we had on trail camera. Who could blame him! I had some nice 3.5 year old bucks on camera. Abigail, on the other hand, was willing to shoot about anything! As the season continued and changed into rifle season, Abigail was getting a really itchy trigger finger. She had a few deer sightings by but nothing seemed to work in her favor. She ended up getting sick for the entire first week of the rifle season and never made it out to the stand again. Samuel missed a big doe and passed on a few other smaller does. At the end of the season I could tell that Abby was down in the dumps. She would comment about how she missed the first week of the season and how she just wanted to see something she could shoot. This prompted a discussion between my wife and I about taking the kids on a hog hunt after Christmas. My wife and I agree that we could use the meet for the freezer and that we could also donate one of the hogs to our church game dinner.

With my wife’s blessing I made a call to my buddy, Coby Jent, owner and operator of Tusk-N-Tines Outfitters of Ohio and told him of our plan. He was more than happy to have us come down. I also called my brother-in-law, Keith, and asked if he wanted to join us and bring my niece, Madison, for the hunt. He checked his schedule and was free to come along and enjoy the hunt. We both kept it a secret till Christmas to surprise the kids. To say they were excited was an understatement. Abigail was so excited she wanted to leave Christmas Day. Sam, on the other hand, was not as excited because I told him he was going down just to video the hunt for his sister. By the end of Christmas Day Sam was pumping Abigail up for the big hunt.

Our energetic, excited, hunting party arrived at Tusk-n-Tines Outfitters on the morning of December 30th. Coby and his head guide, Steve Windbigler, met us and prepared us for the hunt. Everyone dressed in the lodge, sprayed down with Nature’s Essence Cover Spray and followed directions for the morning hunt.  Coby drove us to our box blind and told us of some big boars that had been visiting the area. As we were talking a large 10 point buck stood up from his bed and looked us over. My daughter had never seen a buck that big and she was speechless. Sam’s jaw dropped as he watched the buck slink out of sight. My children talked quietly about the “Monster Buck” they just saw and how cool it was to watch him. All of us entered the box blind and sat down for the morning hunt. I reviewed with Sam how to run the camera and focus on the target. He directed Abigail on her opening monologue as I loaded the Savage .243 and cleaned my binoculars. At this time, Coby drove by the blind taking Keith and Madison to their spot for the morning.

The energy in the box blind was amazing. Abigail and Sam both had their eyes peeled looking for the slightest movement of Russian Boars. Sam did some more filming of the area and Abigail talked with great excitement about the passing time. Every so often we could hear boars squealing and fighting around us. The anticipation was growing in the hopes of seeing a nice boar.  Abigail spotted a huge boar coming our way and she steadied her .243. This Russian Boar fed as it walked over a hillside and down into a creek bed. Abigail chattered like a chipmunk about how cool it was to see the boar and even get it in the scope. Sam was telling her about how he had it in the camera and how he thought it was huge. I was enjoying the conversation with a smile on my face. My children were enjoying God’s creation and seeing animals not found where we live.

Time was flying by with all the quiet chatter and different animals to discuss. I sent Coby a text about lunch as both kids were starting to get hungry. What 9 and 11 year old kids aren’t hungry all the time? Coby replied back quickly that we would be heading back to the lodge about 1:00 to eat. I looked at my watch and told the kids they would have to wait about 45 minutes to go eat. There was a slight groan from Sam, who you would think was starving to death, but that ended quickly when we all heard a hog that was very close.

Abigail was the first to see the large black boar crest the hill and walk our way. Sam turned the camera on and started filming the boar as it fed closer to the blind. I watched as Abigail took aim with her .243. Her breathing was relaxed and she was solid behind her gun. The boar turned broadside at about 65 yards. Sam quietly whispered that he had the pig in the camera. Abigail slowly pulled the trigger and the .243 barked loudly through the valley. The boar raised up on his hind legs and tipped over. Abigail’s expression is one I will never forget. She was speechless as Sam found her in the camera.

Sam wanted Abigail to do her little speech about the hunt but she was still in awe over what had just happened. She wanted to get out and see her boar right away. I told her I would text Coby and have him bring the UTV to get the hog. As she was pointing out the window of the blind and trying to see her hog she said, “There’s another hog out there and it is big!” All of us turned our attention to the boar walking into shooting distance. I gave Sam the .243 and told him Merry Christma

I took the camera from Sam as he prepared to get the rifle ready for a shot. Sam was a wreck! He was so excited it felt like he was shaking the whole box blind! Abigail kept telling him to relax. I began recording the boar as it walked to our left. The beast stopped about 75 yards away between two trees. Sam said he could see the boars front shoulder. He also mentioned that he was steady and had a clear shot. I zoomed in on the boar and the shot dropped him in his tracks. Both kids were now bursting at the seams. Sam looked at the camera and said, “We just doubled at Tusk n Tines!’

In a matter of 5 minutes both excited hunters forgot about being hungry and were talking a mile a minute about the hunt. I sent another text to Coby and he said he would be out in a few minutes. We all walked to Abigail’s boar first and looked at the great shot placement. Then we went to Sam’s hog and looked it over. Coby showed up and we loaded the boars into the back of the UTV. Coby had a huge smile on his face as my kids thanked him a million times for the great opportunity to hunt the Russian Boars.

Lunch was delicious and listening to the kids retell their hunt was a lot of fun. I ate quickly and went back out to sit and video Madison on her hunt. I met up with Keith and Madison and we snuck to a point overlooking the open woods. They told me that they had seen lots of boars so far but not one they could get a shot at. We sat watching the open woods for over an hour as different groups of hogs fed in and out of open areas. At about 3:00 Keith saw a big boar come up out of a ditch. He began pushing other boars around as they fed. As Keith and Madison watched that boar, I noticed a group of hogs coming from our right and they were closing quick. I told  to look to her right. Keith looked as well. The lead boar was a solid 300 pound hog. It closed the distance to 20 yards followed by 8 to 10 other hogs. While they watched the lead hog I saw the last boar in the back. I told Madison to wait and shoot the last one. She switched her focus to finding the last boar of the group. That big boar turned broadside and offered her a shot at 25 yards. Madison took steady aim and slowly pulled the trigger of her .308. The bullet found its mark with a loud thud! The boar began running and then rolled down a big hill.

The three of us together tracked the large boar and located him at the very bottom of a small ravine. We slowly descended down the ravine to the hog. He was huge! We took some great pictures and waited for Coby to come and pick us up.

The ride home from Tusk-N-Tines was full of great memories of the day’s hunting adventure. All of the kids were so excited about their success and mostly about being able to spend time together. We talked about all the different ways we would share the meat with others and recipes that we would try. Abigail was talking about our next hunting trip and how we had to come back for more wild adventures! We all agree to make the trip in 2016 so we could create more hunting memories. 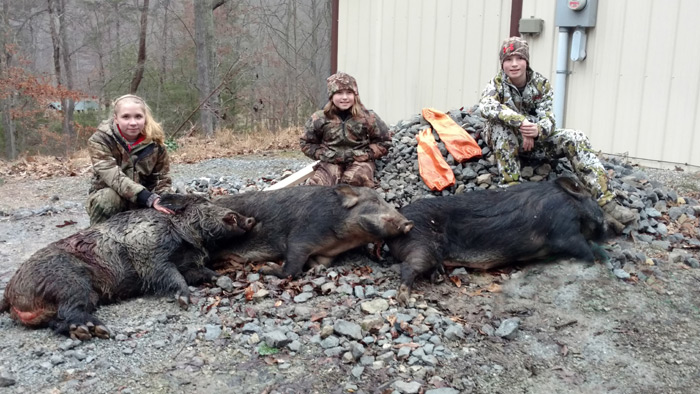 Located in Latham, Ohio with over 300 acres to hunt. Coby Jent has Russian Boars, Rams, and amazing Whitetail Deer to hunt. This is a beautiful hunting preserve with a lodge and wonderful guides. The focus is on you and your hunt! Look them up on Facebook or at: http://tuskntinesohio.com/ Feel free to reach out to Coby at: 740-648-7343

My 'Once in a Lifetime' Buck