My ‘Once in a Lifetime’ Buck 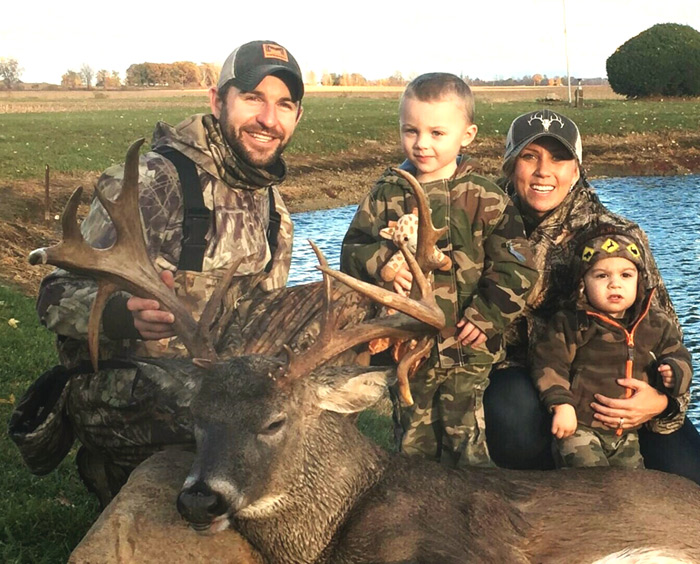 To be honest, I had no history with this deer. While I’ve been blessed enough to harvest 33 deer to date, my biggest was around the 130” mark. The county I hunt in Ohio isn’t noted for having huge deer.  It has many woodlots that are smaller than fifteen acres that get hunted hard during gun season.  This was my first year hunting this property and according to the landowner, the first year anyone has hunted it in quite some time.   I run trail cameras on my other farms but I did not place any on this property due to my unfamiliarity with it.   I hated the thought of losing a camera.  My brother-in-law and I scouted the woods thoroughly during the summer, locating key bedding and feeding areas.   I knew there had to be a giant or two in this area; it was just too good not to.   We had hung fifteen stands across four farms trying not to minimize overhunting individual stands and trying to be better prepared for every wind direction.  I’m a firm believer in hunting near water courses as they are a natural corridor between feeding and bedding areas.  Between my father, brother-in-law, a buddy, and I, we were seeing more deer and having fewer “busts” which I believe was due to this strategy.

The evening hunt started poorly.  I got home from work and got my dad to his stand. After making the 30 minute drive to my stand location, I kicked up five does and a nice looking 130” buck while walking in. Two of those does continued to snort long after I was in the stand. Feeling unbelievably frustrated, I sprayed down with scent eliminator a third time before pulling my bow up. I waited 25 minutes and did a rattling sequence and got no response. I gave it another 20 minutes and did a sequence of two grunts from my True Talker, followed by a small doe bleat. There are two old rusted fuel oil tanks located in this woods about 65 yards behind my stand. I waited a moment then began to scan the woods. I looked over my right shoulder and thought to myself: I don’t remember there being three tanks back there. Then the back one picked its head up. I eased to my feet to get a better view. 10 seconds later, I knew it was a shooter and I never looked at his rack again.

He began walking away from me so I hit him with another grunt. He acknowledged that he heard it and began making a scrape. When he finished, the buck continued to walk away so I hit him with another grunt, which made him start thrashing a tree apart. When he finished, he again began walking away. I hit him with a small doe bleat and it was game on. The buck almost broke his neck trying to pinpoint her location. He began circling downwind as all mature deer do. After scent checking the area multiple times, he began working his way toward me. Call me crazy, but I don’t have scent free carbon suits but I do wear regular camouflage clothing and wash it with scent free soap that is hung outside to dry and put into totes. Inside the totes, I have one bag filled with fresh pine sticks that are shaved off and another bag filled with fresh alfalfa hay. I rarely get winded and it proved itself again as this buck approached my stand.

By now the buck was walking quickly and blew right through my first shooting lane. I drew my bow as he entered the second. As he approached the center of it, I bleated with my mouth to get him to stop. He took two extra steps before he came to a complete stop at 33 yards. I released the arrow when the pin found his chest. All I remember seeing is my orange fletching whip before my 2” Grim Reaper Whitetail Special struck the deer about seven inches back of the heart. The deer took two big jumps then stood at about 52 yards for what seemed like an eternity.

After a few minutes, I decided it was time to try a second arrow. A 52-yard shot through multiple trees is obviously not ideal, but I owed it to the deer to at least try because no one likes to see a deer suffer longer than it has to. I released the arrowed and it seemed like it took forever to get to him. I watched it it hit him and then watched as the buck walked slowly over a hill toward a small creek (the only water source in the woods).

I folded my seat up and sat on the platform of my stand with my back against the tree. To say I was a mess would be an understatement. I sat there for an hour reliving what had just happened and shaking. I finally decided it was time to try to climb down. On my walk back to the truck, I knew what I had to do; wait until the next morning even though the forecast called for more than an inch and half of rain that night. As I arrived at the truck, the thought of waiting all night made me nauseous and I began to dry heave. After I regained some composure, I began the half hour drive home. I talked to at least nine seasoned hunters that night and replayed the events to each. They all confirmed what I already knew; when in doubt, back out.

The rain began around 9pm and was relentless. I sat up all night listening to it pour. It seemed as through first light was never going to come.  Slowly, my hunting buddies started arriving at my house and it was finally time to go find my buck.

It continued to rain the whole way down to the property. We arrived to the spot where I’d last seen the deer, but obviously all blood was gone. I decided to put two people on each side of the creek in a search and rescue type mission. I’ll never forget seeing that deer after we took 50 short steps in the direction he had gone!

After what seemed like a ten mile drag, we arrived at the road where I was able to show this giant to my dad for the first time. This was special to say the least. My dad never deer hunted until I expressed an interest in it at age 11. We learned how to hunt together over the years through what seemed like hundreds of blunders. While we’ve both killed nice deer in the past, none compared to this.

The next call was to my wife, who was beyond excited for two reasons. I had recovered the deer that had haunted me all night and this marked the end of my archery season and I’d be home more. Raising two kids under the age of four isn’t easy but I have to say she is a champ because she lets me do what I love: now hunt. I live for these kinds of memories and cannot wait to share the experience with my two sons in the future.

For more please go to: Bowhunting the West