by Aaron Zimmerman
in Bowhunting Posts
0 0
0 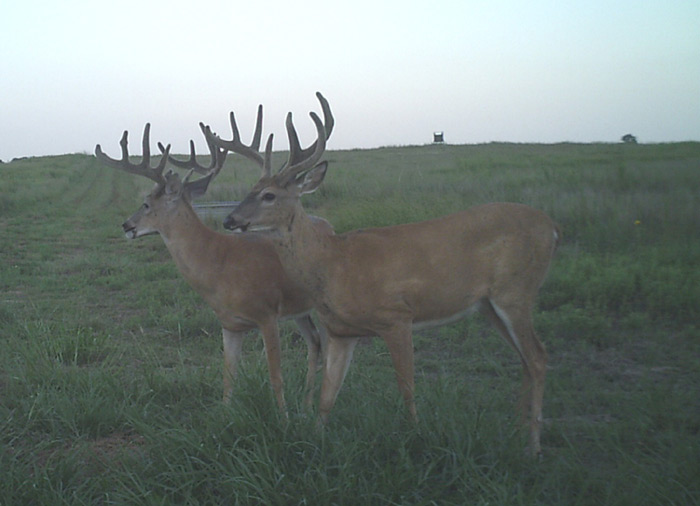 This trail camera shot shows the double main buck during the summer.

Nose to the ground, the once double main beam Kansas buck came into the food plot hot on the heels of a mysterious doe that had just come into heat.  He hadn’t seen her yet, but he knew she was in the area and he had high hopes of introducing himself to her.  Although he had recently broken off his secondary beam in a recent school yard brawl over another female he was still on the most wanted list.  Over the next 5 minutes he would go from inhaling all the places the doe had stood, then over to get a drink from the water trough, and then back to filling his nostrils again with the does scent.  After a few minutes he presented a broadside shot and Macklin Nusz of Hang’Em Outfitters sent his arrow on its way, ending the buck’s chances with the mysterious doe.

The doe he was smelling that evening was in fact a doe in heat, but she wasn’t in Kansas and had never been. ScentBlocker produces a line of deer attractants named ‘Still Steamin‘.  This line of lures includes All Season Doe Urine, Rutting Buck Urine, and Premium Hot Doe Estrus Urine.  The double main beam buck had fallen in love with the urine from a doe in estrus from ScentBlocker, who collects pure urine from one doe which is then bottled fresh, sealed with a wax dipped cap, locking in the freshness in Cannon Falls, Minnesota.  Due to their superior collection methods you can be sure that the urine in your amber bottle isn’t from multiple does mixed together, synthetic, or filled with urine that no longer smells fresh due to having feces, dirt, and bedding all mixed in with the urine.  This is why when Still Steamin’ pours, the color is clear yellow.

Earlier in my youth I had tried just about everything that I had either read or heard could give me the upper hand in my pursuit of a mature buck.  I had tried just about every doe in heat urine on the market and quite frankly had never had a single positive experience.  What caused me to purchase the bottle of Still Steamin’ before my hunting trip several years ago, I have no clue.  I just know that I wanted to make sure that I was prepared for any circumstance and that included having a bottle of doe in heat in my pack.

During that trip to Hang’em Outfitters on day 3 of the hunt I tagged out on a great 170” class buck and never needed to open the bottle.  Having tagged out early it gave my guide, Macklin, the chance to try and capitalize on a couple days of the rut as well.  I offered him the bottle in case he wanted to try it.  He had never been a fan, but with the attitude of “What do we have to lose?” he covered that little food plot with the Premium Hot Doe Estrus Urine and settled in for the evening.  Less than an hour later he was recovering his once love-sick buck.

After that experience, like Macklin I was a believer that the product worked, but still not completely sold that there wasn’t just a little luck still playing into the success we had with the buck.  The following year I hunted with him again and this time he had purchased his own bottle of Still Steamin’.  His wife, Shelby, had not tagged out as of yet so during that trip he would hit the stand filming for her while I was on stand elsewhere.  Heavily applying the Premium Hot Doe Estrus Urine around their stand, yet again proved successful.  On one of those evenings they had a monster 180” class buck come into the scent.  Unfortunately, the buck never presented a shot, but at times had stood within feet of their stand.

It takes the real deal to fool a mature buck like that and Macklin had done it two years in a row.  If seeing is believing, I am a believer.  You can bet that I will be carrying the full line of Still Steamin’ products with me into the field this year on every hunt.  Only field proven products get their own reserved space in my backpack and I can tell you the front pocket of my pack moving forward will always have a couple of bottles of Still Steamin’ close at hand.