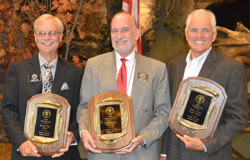 A TWO-TIME OLYMPIC GOLD MEDAL WINNER; a celebrated gold medalist and archery coach; a world class target archer/bowhunter; and a champion archer/bowhunter/promoter were enshrined in the Archery Hall of Fame during induction ceremonies on September 3, 2016. The setting was the Bass Pro Shops White River Conference Center in Springfield, Missouri.

“These four men in the Class of 2015 reflect the same quality of excellence represented by all those men and women previously enshrined in the Hall,” noted Diane Miller, AHOF Executive Director. “It’s an honor to add the names of Darrell Pace, John Williams, Randy Ulmer, and Jack Witt to the list of individuals whose contributions to archery helped to write the history of our sport.”

Here’s a short profile of each new inductee:

DARRELL PACE, who in 2011 was named the Greatest Male Archer of the 20th Century by the International Archery Federation (FITA), twice won Olympic gold medals. A native of Cincinnati, he was only 16 when he became the youngest member of the US World Team and launched his incredible career. He went on to win four consecutive national titles (1973-76) and followed with two more national crowns (1978 & 1980). Darrell also won two world titles (1975 & 1979). His trademark red socks made him easy to spot on the shooting line where his focus and accuracy rewrote tournament record books. Longtime friend and fellow archer Rick Wray shared memories and handed Pace his AHOF plaque.

JOHN WILLIAMS was only 14 when he began shooting in the men’s division at archery competitions near his Pennsylvania home. Between 1968 and 1973, he routinely was one of the top three male shooters in almost every tournament entered. In 1971, at age 17, John won the World Field Archery Championship and in 1972 an Olympic Gold Medal. Later in his storied career, John coached teams of America’s top archers to national, world, and Olympic titles. Longtime friend and fellow Olympic medalist Rick McKinney presented Williams with his AHOF plaque.

RANDY ULMER has made a lasting mark on the sport of archery as both a competitive archer and bowhunter. His collection of tournament hardware and record book big game (most notably big-racked mule deer and elk), speaks to his many years of consistent success and personal accomplishments. Among Ulmer’s many achievements are world and national pro shooting titles, including two NABH crowns, two IBO titles, and a FITA title. He has also won an NFAA crown and a Las Vegas indoor title. A talented outdoor writer, Ulmer pens columns in Bowhunter Magazine and Petersen’s Bowhunting from his Arizona home. AHOF President Rick McKinney presented his longtime friend with the AHOF plaque.

JACK WITT was a champion archer and serious bowhunter from Arkansas who promoted the sport nationwide with shooting exhibitions and his job at Ben Pearson Archery. He also penned magazine columns appearing in Archery Magazine and other periodicals. A founding member of the Arkansas Bowhunters Association and Professional Archers Association, Witt served as Pearson’s Sales and Promotion Manager and was tournament director of the famed Ben Pearson Open, held annually in Detroit’s Cobo Hall. Prior to his death in 1980, Witt also owned and ran The Archery Center pro shop in Little Rock. Arkansas friend and fellow archer H. Keith de Noble presented Witt’s AHOF plaque to Ben Pearson, Jr.

ADDITIONAL ARCHERY HISTORY WAS MADE September 3rd during the 29th Induction ceremony.  Rock music superstar Ted Nugent, an avid bowhunter and articulate advocate of hunting and hunters, received the first Dave Staples “Golden Arrow Award” of Merit, selected and bestowed by the AHOF Board of Directors. Executive Director Diane Miller presented the plaque and golden arrow.

Incidentally, this new honor recognizes lifetime efforts by individual archers whose work inspires others. Nugent’s strong anti-drug, pro-law enforcement message has reached many thousands of youngsters through his Kamp for Kids. His television shows and concerts, which typically include a patriotic salute to America’s armed forces and our country’s constitutional freedoms, set a positive example for others.

After accepting the award, “The Nuge” picked up his guitar and offered a musical tribute to the legendary Fred Bear, earning a standing ovation from the large crowd. He then excused himself to catch a flight to a scheduled concert in Muskogee, Oklahoma.

It was my distinct honor to act as Master of Ceremonies for this memorable evening’s program. It’s been 13 years since I experienced my own AHOF induction in front of friends and family at the Pope and Young Club convention in Madison, Wisconsin, but the vivid memories remain. Consequently, I was tremendously excited for the latest inductees. It’s a humbling and exhilarating moment that will never be forgotten.

All photos by M. R. James

On A Dark And Foggy Morning...