When Do Bucks Shed Their Velvet 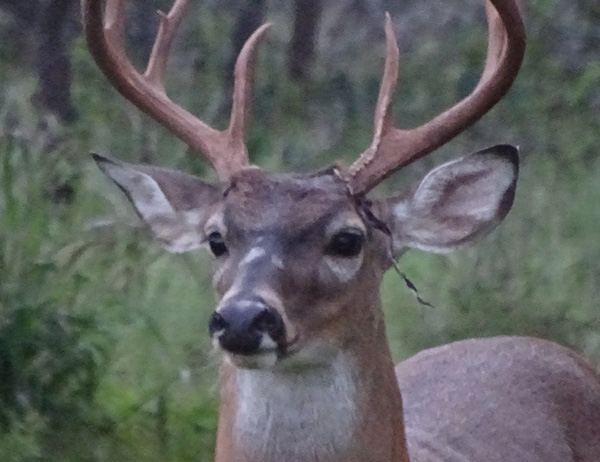 We All Know Buck’s Shed Their Velvet. But When?

I’ve been lucky enough to take pictures of whitetail deer nearly every day the last 20 years, beginning in 1996 when I moved from the city to deer counntry and subsiquently put Bowhunting.net online. I was full of  unknowns, particularly about the bucks antlers;  one of the big ones was when did bucks start to grow their antlers?  And of course, when did bucks shed their antlers? And when did their antlers begin growing again?

It’s a quicker process than I had thought. For example; my continuous observations showed me that bucks in my area lose their antlers in March. In 2 to 3 weeks their antlers begin growing again, which was much faster than I had thought. By April the main beams of their new antlers are slowly growing longer. The brow tines show up first once the main beam becomes long enough for them to fork off and start growing in place. And antler tines also grow in place, as the main beams continue to lengthen. Also when the main beams make their curve the antlers will not be wider than that. The growth on the main beams, as well as the tines, grow from the tips. If the tips are swollen and darkened they are in growing mode. As long as a main beam is growing, a new point could grow from it. When the tips lose their swelling and change to the same color as the rest of the antler, a major transformation is coming rapidly. The growing is over.

The entire velvet tissue constricts around the antler and continues to get tighter. When you are able to see cracks and small breaks or little raggedy bumps in the velvet the hard antler process is coming on down.

When the velvet makes a split near the base of an antler or along one of its tines, and you can see blood peeking  through, changes are good that the next time you see that buck his velvet will be gone and his hard antlers will be showing. The actual time between losing the velvet, start to finish, is only one day. In spite of all the talk I’ve heard about bucks wandering the woods and rubbing their antlers on trees until the velvet is finally scraped off, I don’t believe that is how it is. I’ve seen bucks in velvet during the afternoon and the next morning they are sporting hard antlers, overnight the velvet went away.

I think what happens is when the velvet constricts around the antler it dries rapidly and develops splits in the velvet. And when it’s ready to go it just falls off. When I tell people that they always have doubts, but I know what I’ve seen happen each year for 20 years. One day he’s in velvet and the next he has hard antlers. Sometimes strips of dried velvet cling to the antler and may hang down for a few days. And the hard antlers frequently look brown but that is really dried blood that gives them that color. And they does rub off when they go into tree rubbing mode.

The first buck to lose his velvet this year lost it a week ago and it was the young buck below. 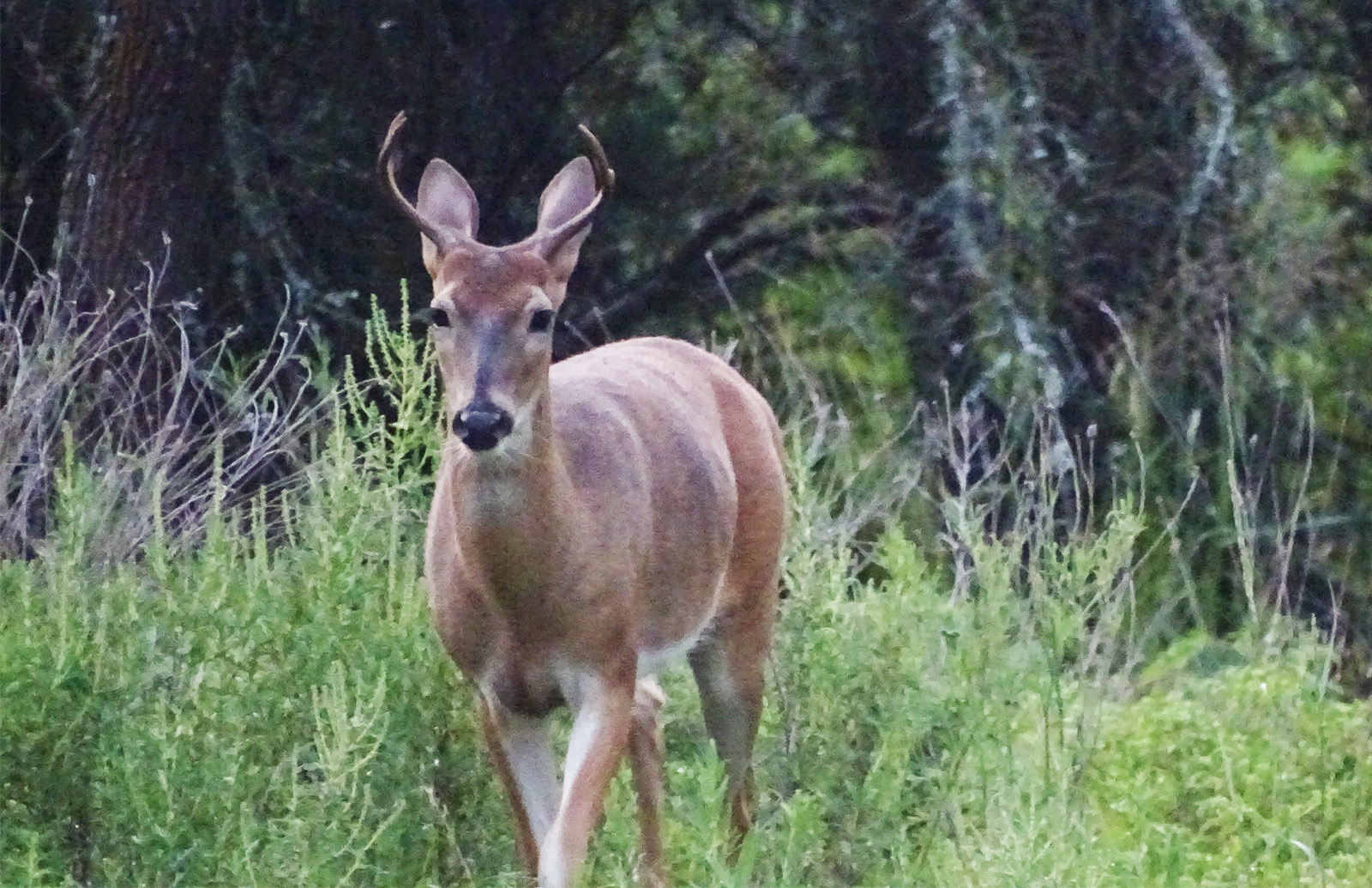 The next one was a 9-pointer. And here is the story. I was at my main food plot. Keeping up with a group of deer is tricky when they are spread all around in your food plot, even more so if you are taking pictures and concentrating on the camera’s viewfinder. So the 9-pointer slipped in without me noticing right away. But when he hunkered up and urinated he caught my attention. I immediately took his picture. 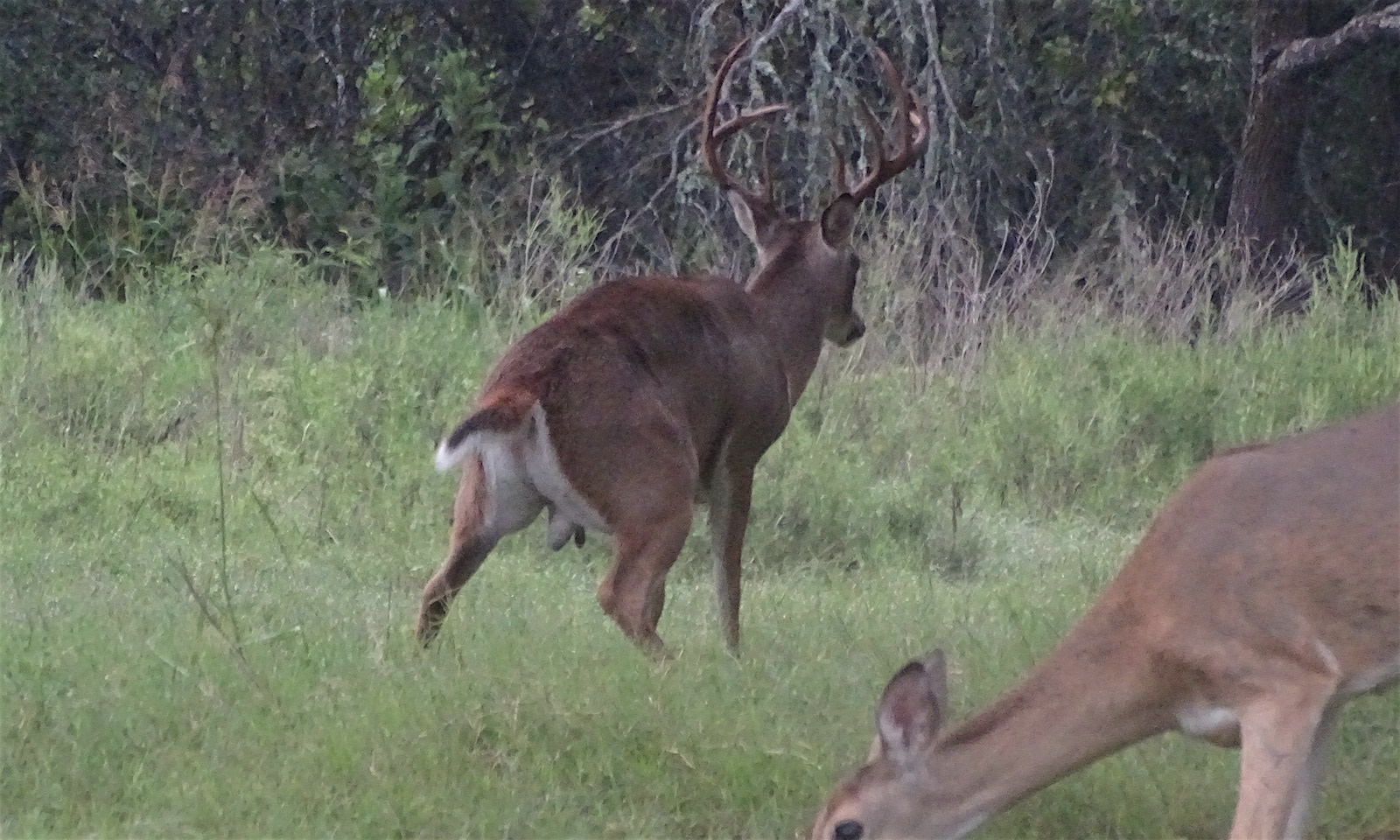 The niner stood a minute with his back to me and i got another picture, this one was a little better. 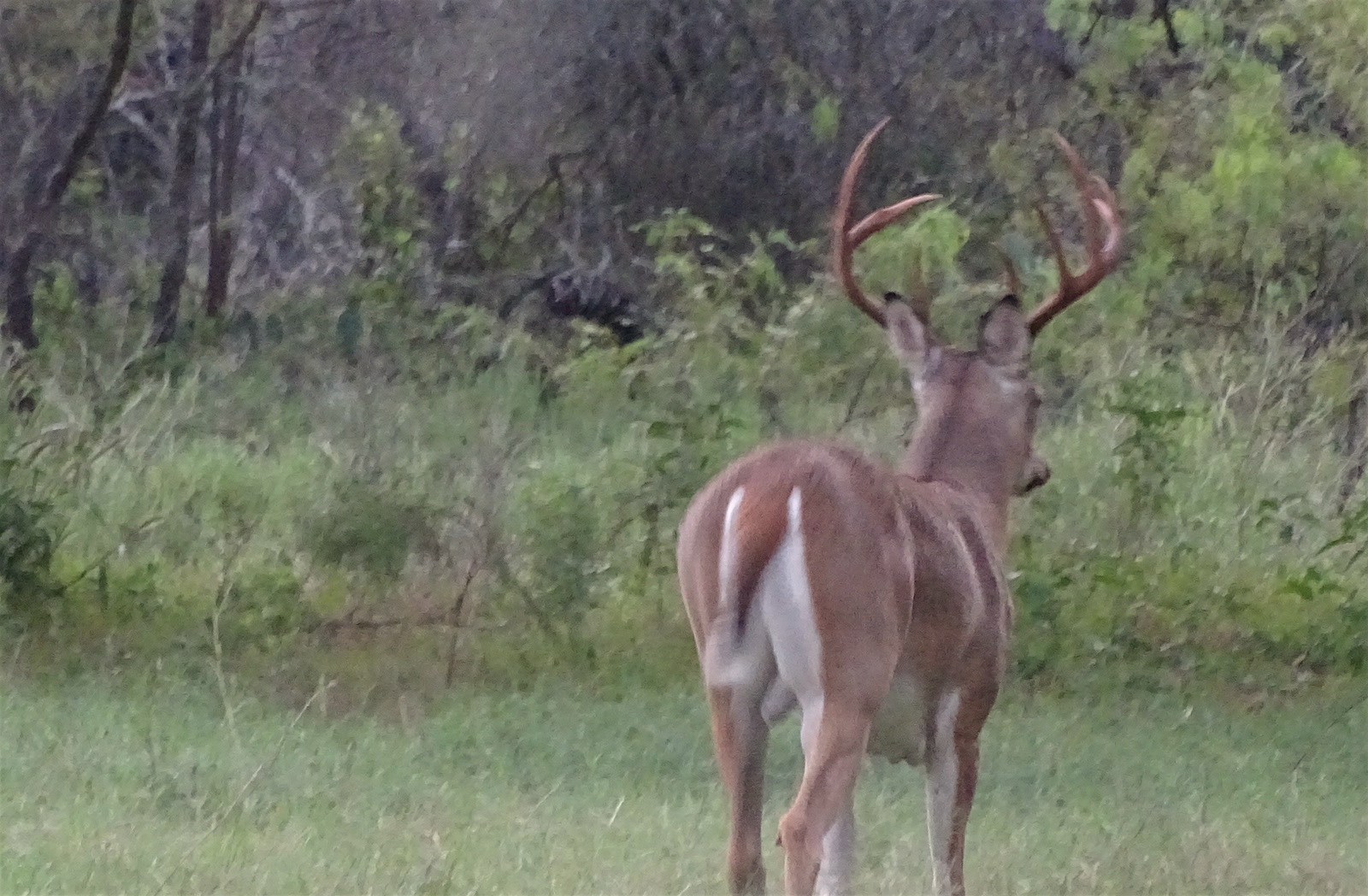 I zoomed in tighter to get a closer view of his new, velvet-less, headware. But he didn’t co-operate. he did a 180 and was facing me. I took a picture instantly and unfortunately didn’t get the top of is rack in the picture. 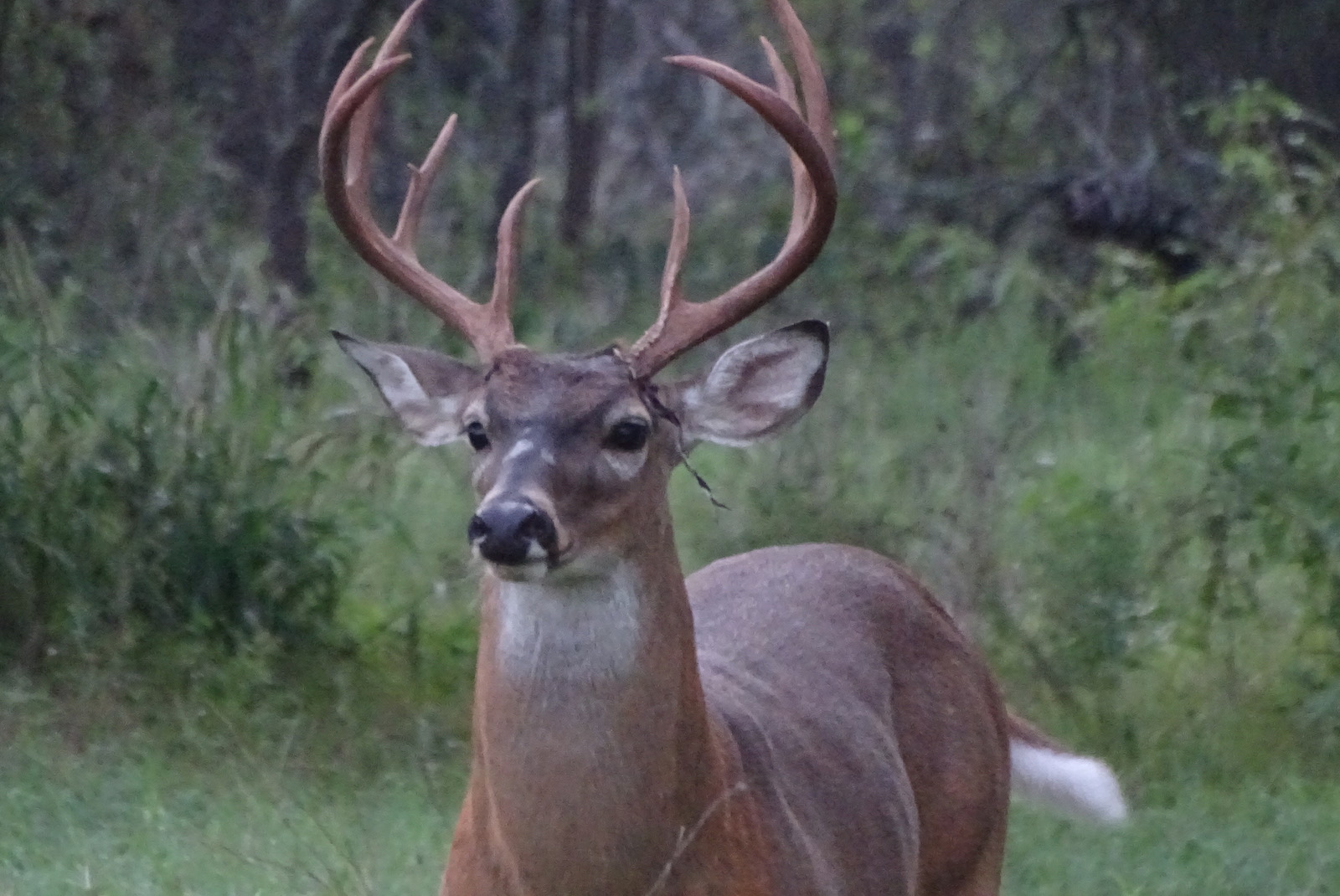 He didn’t give me more time, he turned back around and walked into the woods. I pictured him up before he disappeared into the trees. If you click on the picture you will get a larger picture and you can clearly see dried velvet is hanging from the main beam on your right. 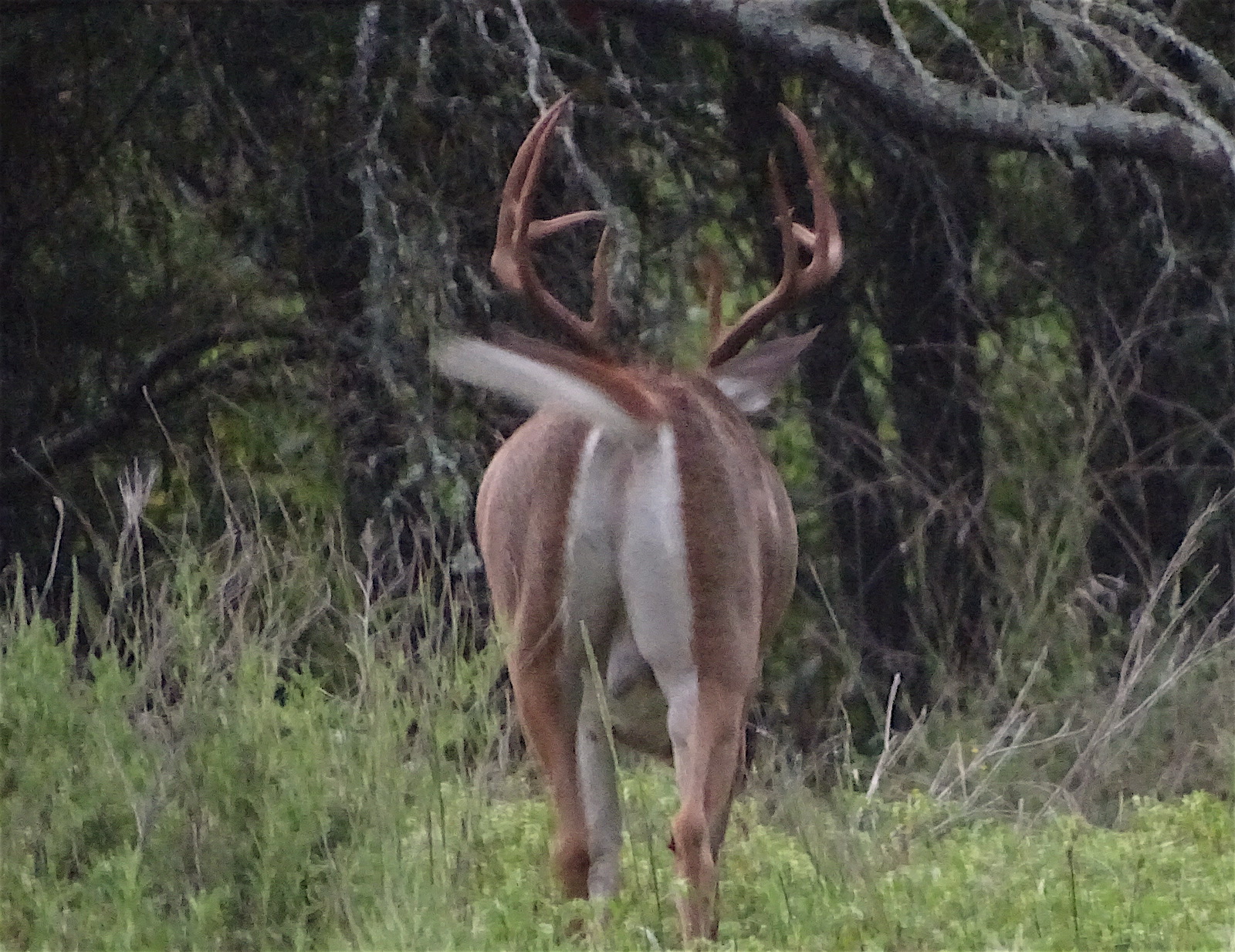 I am definitely excited. More bucks will lose their velvet. And their behavior will change. It’s one of the coolest times in the deer woods. Hang with me the upcoming weeks, they will bring big changes.

Women in the Outdoor Industry with Jen O’Hara

Women in the Outdoor Industry with Jen O'Hara

Following The B10 Buck