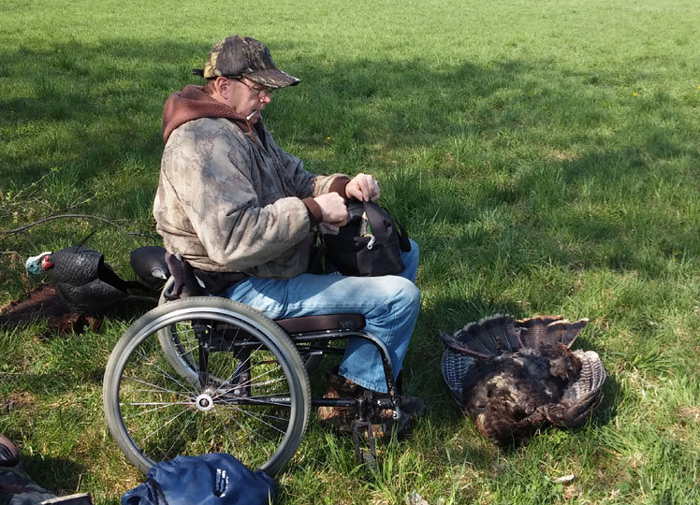 Turkey hunting can be a very exciting sport.  With not much going on in the spring it gives me a chance to get outdoors and do some hunting.  But as I found out this year sometimes, especially for a disabled hunter,  things seem to be stacked against you.  Here in Minnesota we have six, seven day seasons with the last zone { zone F} beig 14 days.  You must apply and be drawn for the first two seasons. The last five you can buy an over the counter tag and have your pick of zones to hunt.  If  you choose  to go with archery you buy an archery license and hunt the whole six seasons. That was my plan,  use my crossbow and hunt the all the seasons.  This gives me more time to get out and  try to put a tag on a bird.

Opening day found me in a ground blind on land I own in north central Minnesota. I was set up on a two acre food plot and my son was set up on the other end. We had a trail camera on a deer feeder over the winter and had many pictures of turkeys, so I knew this was a good area. I had been sitting there for about an hour when a gobble pierced the quiet.  Ah ha action I thought. I picked up my slate call and sent out some sweet hen music to try a lure the old boy in.  Five hens made their way into the food plot.  This is a good sign as where the girls are the boys usually follow.

As the hens pecked away in the field all seemed calm, when suddenly they all scattered back into the trees. Now what, I wondered as I sat back trying to determine what had just happened.  In the blink of an eye a big hawk dive bombed my decoys.  Well, that explained it.  Both of us came up empty handed. The rest of the morning was a bust.  How can one bird have that much effect on a flock? I guess if I was a turkey I would know.

The following day I went back to the same food plot hoping my luck would change. Again, as the eastern sky was lighting up I heard gobbling fairly close. Then I saw movement about 80 yards away. Three birds were coming my way and closing fast.  As they were approaching my blind , I had my binoculars  on them trying to determine if they were hens or toms.  They were making a racket gobbling as they drew closer but I could not see a beard on any of the three.  All noise and bluster but they were just young jakes trying to make an impression.  In Minnesota you can only shoot a bearded bird so, with no beards showing, I had to let the birds walk.  Another bust.

The following week I went to a different location that I had hunted last year and saw plenty of birds. I figured that would be a good spot and maybe change my luck.  After I set my blind and put some decoys out I began my wait hoping for some action to start.  As  it was starting to lighten up the gobbling started. So far so good.  I picked up my slate call and sent out some clucks.  I got an  instance response   Each time I called gobbles came back and they were getting closer  No sooner had the response to my call came, here they came around the corner of the field  about fifty yards away. This was it so while the birds were rushing in I was getting set up for a shot.  Bow in hand, arrow nocked, birds coming in like guided missiles and then they all just scattered in different directions.

Now what?  Not a bird in sight as I scanned the field and there it was, a red fox had followed the turkey in and was also trying to get some lunch.  Once again both predators missed the opportunity. I was disappointed and while the fox was too, he was also curious. He may have missed his lunch but that didn’t stop him from coming right in to check out the decoys. At least that was what I thought until he walked right through the decoys and right up to within 5 yards of the blind. Well this pretty much ended the hunt for the day.

So far I had not done well in Minnesota so I thought I would go to Wisconsin and try my luck there.  Having shot turkeys on both times I been there I figured this was a sure thing.  As much as hunting could be a sure thing. But my bad luck held in Wisconsin too. I hunted Thursday afternoon with no action.  That night at the hotel I discovered I forgot some medical supplies’ I desperately needed.  I told Mike Kurr, my guide, because of that I could only hunt till noon the next day.   So, the next morning we got set up on big hay field and as night gave way to day we heard gobbling off to our left.

After 20 minutes of calling the large tom showed up at the end of the field.  Encouraged, we continued calling trying to lure him closer so he could see the decoys. As I watched his brightly colored head bobbing up and down in the long grass I sure he would come in. Then when he was about 100 yards away he spotted the decoys. Oh yeah I thought. Then he perked his head up and I knew what ever that something is that only turkeys know, didn’t look right.  Here we go again. He made a hard left turn and went back into the woods.  That was the extent of and end of my morning excitement.  We loaded our gear and headed home.

I went out several more times, heard birds but none showed. That’s how my 2016 turkey season went.  Sometimes it seems that everything is stacked against you, but you have to shake it off and look forward to next year.  Something good is bound to happen. Sooner of later.