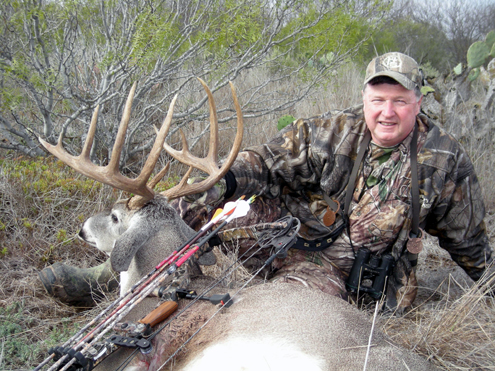 Texas is home to its fair share of bragging-sized bucks. Alabaman Eddie Salter took this bruiser on a fall bowhunt in the Lone Star State.

Several October’s ago, I was among a group of outdoor writers invited to Demopolis, Alabama for a bow hunt. The weather was hot and dry and I soon learned that – even with the exploding deer herd in the Black Belt area – this hunt was not going to be a “gimme.” Alabama deer are tough to hunt, and though there are definitely more of them per acre than in most states, they can be quite elusive.

Our camp was phenomenal. Our lodge was nicer than most upscale hotels that I’ve stayed in. The food was superb, and the camaraderie was second to none. Though I failed to arrow a swamp whitetail, I learned a tremendous amount about hunting the southern state’s wary deer.

Alabama is blessed with several deer experts, but I have chosen two for this article. Below are their tips for a successful season.

I met Larry Norton several years ago at a turkey calling contest. A former world-champion turkey caller, I was amazed at Norton’s prowess with a turkey call. Since, I’ve got to know him better and learned he is an outstanding deer hunter too.

Norton is an accomplished bowhunter who logs many days afield each season. His years of bowhunting have taught him several things that have made me a better archer.

Norton has hunted the state since childhood and humbly admits to taking his fair share of bucks, but now hunts almost exclusively for trophy bucks with a bow. His best “Bama buck netted 148 inches, and readily admits his home state is a tough state for hunting. “Our deer have learned to become very smart, and if hunters don’t take precautions and are methodical in their approach to deer hunting, they won’t see many deer,” said Norton.

Due to the drought in some areas, Norton believes that archers who capitalize on waterholes this fall should have an easier time filling their tags. He explained, “Deer have to have water to survive, so creeks and springs are great places to hunt. In addition, acorn trees growing near water sources are usually ripe with their tender round delicacies, and serve as magnets to attract area deer.”

Norton scouts his hunting areas in February to avoid disturbing the bucks that will frequent his stand locations, and likes to hang his treestands at least 20 to 25 feet high in a tree to avoid being detected by whitetails. “Our deer are very wary and I believe they can spot hunters that aren’t high enough in a tree,” he said. “Being higher in a tree also allows your scent to be less detectable.”

He continued, “I absolutely believe that hunters should stay completely out of the woods before season, because once a mature deer smells a human, they change their patterns. However, I also believe that deer are more comfortable in the woods during archery season, because archers do not disturb them as much, as other hunters do.”

Norton claims that most of the deer he has taken during archery season are taken between 8 and 11 a.m., and has learned that by studying the color of acorns in an area it is easy to predict when deer will be feeding on them. “When I see acorns start to fall that are green colored, I know in a week’s time the remaining acorns will turn brown, and the area’s deer will move in on that particular tree to feed,” stated Norton.

Being a trophy hunter, Norton believes the first time he hunts a new treestand his odds are the highest for taking a trophy buck. He believes it is hard to beat a deer’s nose, and is a fan of Tink’s 69 deer scents. He feels that cover scents and lures can cause a deer to be confused long enough, to give a hunter a shot.

Eddie Salter is afforded the luxury of hunting some of the finest whitetail spots in North America, but the Alabama legend still makes time to bowhunt the state’s whitetails. In fact, Salter estimates he spends at least six weeks a year chasing the incredible bucks of Conecuh County, near his home.

Like Norton, Salter believes that food sources will be the key spots to finding deer in the fall. “I believe hunters need to be more aggressive when hunting near known food sources,” opined Salter. “Food sources will probably vary due to some areas being dry, but perceptive hunters will lock in on the best foods available in their areas, and hopefully kill a good deer.”

Salter suggests that hunters with private land access consider planting a food plot this fall. Eddie plants a seed blend comprised of sugar beets, turnips, two strains of rape, chicory, and Little Burnett. He claims since planting his plots with the new seed mixture, he has seen an increase in deer activity as well as in heavier body weights and better antlers

Salter also encourages all hunters hunting from treestands to wear a safety harness, citing his own misfortune as an example. “If you care for your family and loved ones, you need to wear a safety harness to insure you aren’t permanently injured by a treestand fall,” he said. “I have tried several, but I believe the Hunter’s Safety System is the very best on the market. Their harness is engineered to keep a hunter in an upright position if a fall occurs, allowing them to easily get to safety. Several years ago, Salter fell after his treestand broke and suffered a broken leg, sidelining him for several months.

Like Norton, Salter believes that early-season hunters need to find out what the deer in their areas are eating. “In my area the bucks will sometimes lock in on kudzu – a vine-like plant that is a member of the legume family – and feed on it until the first frost kills it out,” said Salter. “I found a field of kudzu years ago where the deer were heavily feeding,” remembered Salter.  “The area had antler rubs everywhere – normally a sign of a likely feeding area. The first time I hunted the spot I took a Pope & Young buck.”

Also a proponent of scent-free hunting, Salter believes like Norton that most hunters don’t spend enough time controlling their scent while in the woods. He also believes that hunters should be scent-free while scouting as well, advising that most hunters ruin their spots by touching limbs and leaving their scent everywhere in the process. In fact, Salter advocates using caution while scouting. “Little things like scent-free scouting can make a huge difference when you are hunting,” opined Salter.

Salter also added that hunters should consider changing their hunting caps often due to the heavy scent deposited in them, and to consider wearing a watch with a rubber band instead of a leather or nylon band which are notorious to hold sweat from everyday usage.

CLOSING THOUGHTS BY THE EXPERTS

In closing, Salter and Norton both expect the upcoming season to be good, and have high hopes the south will receive some much needed moisture before deer season. Both experts suggested hunters spend more time doing their pre-season scouting from a distance, and to strive to keep their areas from being contaminated by human scent. Norton drove home the importance of scent-free hunting by citing an example he learned many years ago. “I stuck a stick into the ground to mark a specific yardage for a potential bow shot,” said Norton. “I wasn’t wearing gloves when I stuck the stick into the ground, and a week later I had a mature doe smell the stick – obviously holding my scent – causing her to blow and run from the area. I learned then that deer have an uncanny ability to detect human scent, and after all, their nose is their number one defense mechanism.”

Hopefully, one of these tips from these whitetail experts will help you hang your tag on more deer this season. As hunters and conservationists remember we have a role in ethical hunting, by abiding wildlife laws and reporting those who don’t.

Don’t Lug Your Bow: CLAW it With the Hand’s Free Bow Carrier

Just One Shot: The Shot

Good News: This Morning Was Pivotal In The Deer Woods